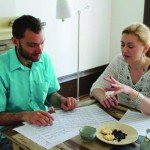 Jason DeCristofaro and Dosia McKay review McKay’s “First in Flight,” which will premiere at the July 21 concert. The piece calls for string quartet and vibraphone, which will be played by DeCristofaro. 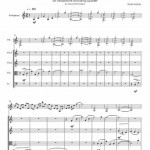 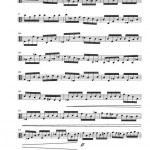 From first in Fight by Dosia McKay 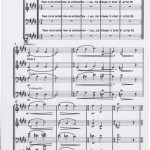 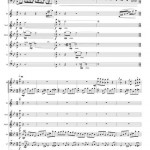 The sample page features the opening bars of “First in Flight,” [a] fast-paced and energetic piece full of colorful harmonic progressions, vibrant melodic lines, playful jazzy riffs and dreamy soundscapes. If music can be compared to painting, this composition is an explosion of color.

Pictured: Jason DeCristofaro and Dosia McKay review McKay’s “First in Flight,” which will premiere at the July 21 concert. The piece calls for string quartet and vibraphone, which will be played by DeCristofaro.

Most people consider classical music to be old music, unless you’re at a conservatory, which we aren’t. Even the term conservatory implies preservation, commemorating rather than creating.

Composer and musician Jason DeCristofaro has called a rally of sorts to refute that assumption, and although the Brevard College adjunct may actually be at a conservatory right now, he’s taking the debate out of school.

On Sunday, July 21, DeCristofaro and four other composers will present new classical works, which doesn’t necessarily mean new old. “A lot of people have this impression of classical music as a relic, as an old art form, and that all classical literature for the concert hall is 100 years old or more,” he says. “A lot of people composer, they think of Bach or Beethoven or Brahms. There’s a social misconception. I think people are shocked to hear that people are writing works for the concert hall in the classical vein.”

McKay, Richmond, Stevens and Winter will present works for string quartet, providing a kind of unintended theme to the event. “So I went ahead, basically, and formed a string quartet just for the concert with musicians from the area,” DeCristofaro says. He recruited Asheville Symphony Orchestra violinists Pam Robbins (first), Paul Stroebel (second), Symphony of the Mountains principal Gina Mashburn Caldwell for viola and Matt Wilkinson on cello. Two pieces — McKay’s “First in Flight” for string quartet and vibraphone and Winter’s “String Quartet No. 1” — will be played for the first time at the concert.

“The idea is to get people excited about classical music and to bring in a winder audience,” DeCristofaro says. “There are lots of classical music fans in the area, which we are blessed to have. But a lot of people who don’t typically listen to classical music, they may have an aversion to going to see it performed, particularly new works, because it’s just unfamiliar.”

To encourage familiarity, Xpress asked some of the participating composers to provide some advance reading material: a page from the scores, along with a few details about the composition processes and the pieces’ themes and concerns. (Winter was out of the country when this story was prepared. See the online version for his contribution.) From First in Fight by Dosia McKay

The sample page features the opening bars of “First in Flight,” [a] fast-paced and energetic piece full of colorful harmonic progressions, vibrant melodic lines, playful jazzy riffs and dreamy soundscapes. If music can be compared to painting, this composition is an explosion of color.
The title is my nod toward North Carolina, which has become my new home. The vibraphone begins with a solo passage stating the main theme, then it is joined by viola, then cello and later violins, all echoing the main theme, beginning to weave it around each other, forming a unified structure.

I usually compose at the piano. Sometimes with a pencil and staff paper, and sometimes using computer notation software. If I write for a small ensemble, I usually write for all involved instruments simultaneously, but if I am composing for a symphony orchestra, I start with a piano reduction (sketch) and later decide what combinations of instruments will be best to carry out my initial ideas. I go through many drafts before the composition is complete.

Lately, I have been concentrating on composing for a string quartet, and “First in Flight” is continuing with this instrumentation, although it is expanded to include the vibraphone. I would like to record an album of my compositions for a string quartet and this piece will be featured on it.
— Dosia McKay’s composition portfolio includes scores for film, concert stage and modern dance. She weaves elements of classical harmony, jazz, pop, avant-garde, ambient soundscapes and the lyricism of folk melodies of her native Poland. Her music has been featured on National Public Radio and in concerts in New York, Washington, D.C., Poland, Spain and other cities. McKay is also a flutist, a visual artist and poet. She currently resides in Asheville. For more about McKay and her music, visit dosiamckay.com. From Moto Perpetuo for Solo Viola by Jason DeCristofaro

I primarily write at the piano, or my two primary instruments I perform on, the vibraphone and marimba. I often sing melodies in my head. These melodies occur to me at inconvenient times, when I am teaching and away from manuscript paper, so I frequently sing them in my head. I always have music playing in my mind, often three different melodies happening simultaneously.

I wrote this work earlier this year for Gina Mashburn Caldwell, a phenomenal musician. The work is a moto perpetuo, an exciting roller-coaster ride and a non-stop tour de force of energy, with 176 measures of constant 16th notes weaving a melodic tapestry for the listener.

J.S. Bach is my favorite composer, and his works for solo violin and cello are some of my favorite repertoire in the classical canon. This work is my tribute to those magnificent compositions, as I borrow many of the structural elements he perfected when writing for solo strings, including com- pound melodic lines, ascending arpeggios and scalar embellishments.

Shakespeare’s “Brevity is the soul of wit” is a mantra I maintain in my music. I enjoy writing works where a multitude of ideas are communicated in a short amount of time. Like poetry, another love of mine, I aim to have several layers in my music. Even though my works are often only five to seven minutes in length, I spend a great deal of time on each measure, trying to find the deepest meaning possible within the notes, just as a poet carefully expresses their idea through an economy of words which provide the most profound impact for the audience.
— Jason DeCristofaro teaches courses in music theory, aural skills, world music and jazz history at Brevard College. He also teaches at Joyful Noise, a nonprofit community music and arts organization and performs as a percussionist with the Hendersonville Symphony Orchestra, Brevard Philharmonic, Carolina Concert Choir and Hendersonville Chorale. He is founder, director, host and coordinator of the Asheville Composers Concert. From What About the Future? by Michael Jefry Stevens

This [piece] was originally com- posed for solo piano and then eventually recorded and per- formed by my European/American “Conference Call Quartet” in Krakow, Poland, several years ago. This new arrangement for string quartet with additional piano introduction and interlude is part of my continued attempt over the past 30 years to integrate “classical” and “improvised” music.

The page in question begins with the piano performing the main thematic material out of tempo. After the piano is finished introducing the theme the string quartet begins to play the music in tempo. — Michael Jefry Stevens is a pianist, composer, band leader and recording artist with more than 75 CDs released. He currently resides in Black Mountain and teaches privately and at the Asheville Music School. He is also artist-in-residence for several weeks every year at the Educacion Musicale in La Plata, Argentina. This one one of my very first pieces, with the solo version written 20 years ago (while I was in college) and the orchestrated version a couple of years later. At the time I was primarily a performer, focusing on the marimba, so that was what I wrote for.

“Dia y Sueños” is a mini-concerto for marimba, so it’s primarily meant to be fun and not too deep. As the title (“Day and Dreams”) suggests, it is inspired by the contrast between the hectic, demanding outside world and the (hopefully) more peaceful world that we can find inside.

This is part of the “Day” section. There are several layers of themes happening together at this moment, leading to the climax of the fast, rhythmic portion of the piece.

where: St. Matthias Episcopal Church, 1 Dundee St.
when: Sunday, July 21 at 3 p.m. The concert is free, with a $10 suggested donation. Funds collected through the donation go to church renovations and to the performing musicians.