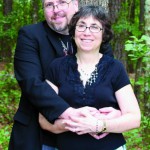 All aboard: "We're chroniclers of steampunk, not so much steampunks ourselves," says The Steampunk Bible author Jeff VanderMeer who, with wife Ann, just published The Thackery T. Lambshead Cabinet of Curiosities. 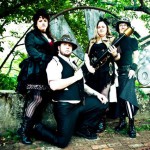 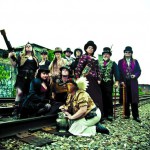 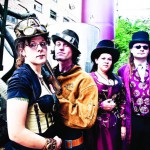 There are a number of cases in The Thackery T. Lambshead Cabinet of Curiosities: Exhibits, Oddities, Images & Stories from Top Authors & Artists (Harper Votager, 2011) in which the dead don't remain dead. Or aren't really dead. Or never actually died to begin with. There's Lambshead's wife, Helen Aquilus, who "died in an auto accident on a lone country road in 1960," though there was speculation that "she staged her own death to join a secret society devoted to radical progressive change in the world." There's Nikola Tesla whose electrical neurheographiton, or brain-wave writer, was purchased by Lambshead; in 1943 he "claimed to have died, although reports were conflicting." And there's Sir Ranulph Wykeham-Rackham (to whose full-body prosthetic Lambshead contributed) who, thanks to science and robotics, could not die.

The subject of the book, by authors/spouses Ann and Jeff VanderMeer, is dead. Fictitious Dr. Lambshead passed away in 2003 (having lived more than a century) just prior to the publication of The Thackery T. Lambshead Pocket Guide to Eccentric & Discredited Diseases (by Jeff and Mark Roberts).

"Some of our projects come out of the strangest or most absurd circumstances," says Jeff. It was a friend’s tongue-in-cheek claim of "mad quail disease" that inspired Jeff to write the book of fake diseases. Because "we're very much in love with writers who use non-fictional forms for fictional purposes," he came up with the idea of the eccentric English Dr. Lambshead as the compiler for the book of diseases. Novelist Neil Gaiman loved the idea so much that he sent a contribution.

In celebration of Ann and Jeff VanderMeer’s visit to Asheville, members of local steampunk group S.P.A.T.S.(SteamPunk Arts and Technical Society) gathered outside the Wedge Brewery to show off their unique style. The group meets the second Tuesday of the month at Jack of the Wood (or, in case Jack of the Wood is crowded, across the street at Thirsty Monk), 7-9 p.m. At this shoot: Arbutus Tinkersmith, Tammy Buckner, Carin Diamond, Vernon Sharp, Q, Candice Twomey, Savannah Willingham, Patrick Dolan, Megan Dolan, Teleri Ferch Nyfain, Danielle Leyonmark, Sister Discordia, Jennifer Hersey and Melissa Glaze.

Photos by Chris Wood. Costumes are by made by each steampunk. Metal-look top hats are by Organic Armor. View the full photo gallery below.
— A.M.

"When it came time to do a sequel, we didn't want to do a second disease guide," says Jeff. (Although he does point out, with a laugh, that the niche-y Diseases has actually found its way into medical libraries.) On a hike with Ann, the two struck on the idea of a cabinet of curiosities belonging to Lambshead, around which a collection of stories could be written. "Objects, everything in our lives, have emotional resonance," says Jeff.

So, Cabinet is organized around the fictitious estate of Lambshead. More to the point, each object is represented by a piece of art and accompanying prose. Some sections are catalogued like a museum ("Holy Devices and Infernal Duds: The Broadmore Exhibits," in which Tesla's brain-wave machine can be found); other sections are arranged like a written history ("Honoring Lambshead: Stories Inspired by the Cabinet," including the tale of Lord Dunsany's Teapot ,which seems to provide protection to its owner). Each fantastical object — an anthropic creature in a wax-sealed jar, a bronze skeleton key gripped by a mummified hand, a single shoe — is the jumping-off point for 30 writers to wax creative. Comic book artist Mike Mignola (Hellboy), young adult author Molly Black (The Spiderwick Chronicles) and novelist Lev Grossman (The Magicians) are among the contributors.

As for how the items in Lambshead's cabinet came to be: "We came up with the artists and the artists came up with the objects," says Ann. "There were cases in which a writer wanted to work with a specific artist. In other cases where we had a really cool piece of art that we sent to a writer and said, 'What do you think of this?'"

One such piece, the mecha-rhino by Russian artist Vladimir Gvozdev, shows up not only in Cabinet but in Jeff's The Steampunk Bible (written with S.J. Chambers; published this past May). Jeff (also a prolific fiction author who has, with Ann, completed nine other works) says that there was some "overlap of aesthetic" between Steampunk and Cabinet. Jake von Slatt (who mans SteampunkWorkshop.com) was at work on two projects for Cabinet while Jeff was involved with Steampunk. So, "we actually have a photograph of a half-completed artifact for the Lambshead book in The Steampunk Bible," says Jeff.

Though the VanderMeers are certainly authorities on steampunk (a sci-fi sub-genre that takes inspiration from Victorian-era literature, art and thought around steam power and technology), the couple doesn't necessarily act the part. "We're chroniclers of steampunk, not so much steampunks ourselves," says Jeff. "Even the most ardent steampunk doesn't live it 24/7." It's an escape, as sci-fi and fantasy are meant to be.

But for one group of sci-fi/fantasy enthusiasts, there is an opportunity to be immersed in that world for two full weeks: The VanderMeers will be teaching at Wofford College's Shared Worlds, a teen fantasy writing camp. That takes place in late July; part of the reason for their Malaprop's date this week.

"You can think of it more as a teen think tank," says Ann. "They learn how to collaborate with each other, how to negotiate and how to build their own world." Lectures include psychology, mapmaking, geology and religion. The VanderMeers bring in guest writers (like Black, a connection from Cabinet). "The Lambshead book is a good example of how you extrapolate certain fantasy concepts," says Jeff.

"We've had quite a few adults ask us why we don't have a camp like that for adults," says Ann.

Perhaps they will offer such a thing in the future. For now, fans will have to make do with the VanderMeer's reading events — which promise to be entertaining. "We tend, when we do this, to focus on the humorous stuff. We have really funny back stories about the creation of some of this material, both in the Lambshead book and The Steampunk Bible," says Jeff. "We're going to tell all the secret back stories."

who: Ann and Jeff VanderMeer
what: Authors of The Thackery T. Lambshead Cabinet of Curiosities
where: Malaprop’s
when: Sunday, July 24 (3 p.m., free. malaprops.com)

One thought on “Curiouser and curiouser”