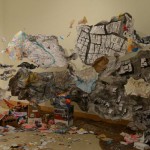 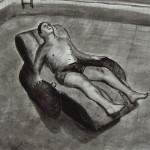 For local artist, writer and now curator Ursula Gullow, oysters, clams and corn are not the only things that can be shucked. Add artists to the list of things that can shed their protective coverings. In Shucked, a group show opening at Push Skate Shop and Gallery this Friday, she brings together six local artists whose paintings, drawings and site-specific installations reveal the process of artistic creation itself.

Gullow, a painter who also writes about art for Xpress and her blog artseenasheville.blogspot.com, is making her curatorial debut with Shucked. She was originally offered the space to show her own paintings, but decided to use the opportunity as her curatorial launchpad instead. Push's owner, Rob Sebrell, was open to the change. This relaxed approach is typical of Sebrell, which is one reason the gallery is popular with young artists who want to explore new directions in their work.

During an interview, Gullow explained the exhibition’s concept and how the artists fit that concept. She also described her role as curator; she sought to investigate the processes of creating artwork, not just the final product. She says the finished works viewers will see are "fulfilled processes."

"It's hard to start a painting expecting a specific outcome, because it's rarely going to come out that way,” Gullow says.

The array of work in the show includes a painting by Anna Jensen, paintings by Lisa Nance, drawings by Michael Ohgren and pagan ceremonial garb created and worn by textile artist Tara Jensen (no relation to Anna) for a Beltane festival. Installations by Lauren Whitley, Nance and Courtney Chappell will be staged in the gallery a few hours before the opening.

To explore the notions of process and self, Gullow pushed the artists outside of their comfort zones. "The artists are working more intuitively, more directly, rather than only focussing on the final object,” Gullow says. “A precious, commodified object."

Whitley, Nance and Chappell are painters, but for this show they are constructing sculptural installations using found materials. Whitley will be install a favela-esque shelter made from scrap wood and discarded educational refuse. Chappell, who is currently out of the country, will leave it to Gullow to mount the third incarnation of a sculptural installation she created in reaction to the Persian Gulf War. Found materials, including wire, cardboard and waste paper, form a model war-torn city awash in colors and flecked with text and images clipped from magazines. Nance’s contribution is a simulation of kudzu — a prolific invasive vine — that will festoon the gallery’s walls.

Gullow asked illustrator Michael Ohgren to arrange his drawings en masse in the gallery to mirror his studio. When she visited his workspace, she was struck by sketches and drawings scattered across his walls, hung on strings and piled on his desk and the floor, reflecting a process of creation and constant transformation. Since a theme of Ohgren's work compares the creation and separation of people’s public and private lives, Gullow is bringing Ohgren’s private studio space into the public eye.

While Gullow has prompted her six artists to take risks and reveal their processes and themselves, Shucked prompted Gullow to take risks as a curator, revealing her approach to the process of organization.

— Kyle Sherard is an Asheville printmaker, painter and writer for the arts.