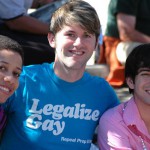 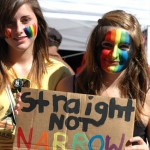 Festival co-chair Ashley Arrington says, “what's really neat about Asheville, that we don't necessarily get in other communities, is the allied community and the support we get." Photo by Michael Muller

Pride in Asheville — we're not talking your run-of-the-mill civic pride (which is great too), but LGBTQ (lesbian, gay, bisexual, transgendered and questioning), Pride — has evolved over the years. There were colorful parades, performers in Pritchard Park, countless parties and after-parties. Last year's gathering on Lexington Avenue was a well-attended and celebratory affair with nationally touring performer Mia Borders headlining. The festival has also taken place under the auspices of different organizers and names. N.C. Pride (the state-level organization) held its annual gathering in Asheville in '91 and '98. More recently, the event was called Asheville Pride Festival. This year makes the third that it's been launched by Blue Ridge Pride, a volunteer-based organization.

It seems that the current iteration is the charm. "We're one of the few Prides that has no protesters," says Ashley Arrington, festival co-chair and community outreach coordinator. The festival takes place this Saturday in Pack Square Park, a new home for the daylong festival. While it shares many similar themes with its national counterparts (educational booths, performances and a supportive atmosphere for members of the LGBTQ community and their straight friends), there are also many differences between the local Pride festival and its national equivalents.

First, "There are not a lot of national acts," says Arrington. "We don't want to put the same people from every Pride on stage. We want to do something different that embraces our culture here." This year's strictly local lineup includes indie-pop band stephaniesid, kid-hop artist Agent 23 Skidoo, vocalist Kat Williams, gay men's choral ensemble Cantaria, all-women act The Idgies and female impersonators from Natalie Small Productions.

Hairspray (38 North French Broad Ave.)
Pre-party on Friday, Sept. 30 with a drag king and queen show. A portion of the proceeds go to Blue Ridge Pride.

That some of the performers are not LGBTQ-identified doesn't bother Arrington. "We've never had that as a requirement," she says. "We want to put people on stage who represent the LGBTQ community, but what's really neat about Asheville, that we don't necessarily get in other communities, is the allied community and the support we get." And that goes beyond musicians — Arrington says that Blue Ridge Pride has "a large number of straight volunteers."

One of the organizers from Atlanta Pride, says Arrington, claimed in a conference that "everyone in Asheville's gay." Arrington says it can seem that way because the town is accepting of a variety lifestyles, and fostering that attitude is sort of the point of Pride anyway. That, and celebrating the LGBTQ community. The mission statement of NC Pride includes promoting "unity and visibility among lesbians, gay men, bisexual and transgendered people," promoting "a positive image through programs and public activities that foster an awareness of our past struggles" and encouraging recognition as "an important and talented sector of our diverse state."

Blue Ridge Pride adds another mission: creating a community center. "That's how we came about three years ago," says Arrington. "We wanted to facilitate that process." The community center was in the works before but never reached fruition. Blue Ridge Pride hopes to spearhead that resource in collaboration with other local LGBTQ groups.

To get that going, Blue Ridge Pride came up with the Your Equality Speaks Asheville campaign, a tourism map for LGBTQ visitors who want to find businesses (venues, restaurants, hotels) where they won't feel shunned. Map memberships run $25; the completed product will be unveiled at the festival. Funds from the project jump-started the community center's financing. It's been slow-but-steady, planning-wise, but "in the last year we've see that steam pick up a little bit," says Arrington.

Right now, the topic at hand is the festival. And there's more to Blue Ridge Pride than just the festivities in Pack Square Park from noon to 6 p.m. Actually, there are so many peripheral activities that the festival ends two hours earlier than it has in past years so that attendees and volunteers can get to the parties. (See the sidebar for more on after-parties.)