Ever wondered where the big white doors in Blue Spiral 1‘s downstairs gallery lead? Friday night is your chance to find out.

Castell Photography and Blue Spiral 1 are teaming up for a one-night-only collaborative opening event on Friday, May 1, from 5 to 8 p.m. Both galleries will debut group photography exhibitions in conjunction with the Downtown Asheville Arts District’s monthly first Friday art walk.

For the first time ever, Blue Spiral 1 visitors will be ushered, via those big white doors, through a passageway that leads into Wilson Alley, just a few feet from Castell’s front door. The alley will serve as the epicenter of the tandem openings and feature food and beverages by local providers, as well as a music by DJ Hillbilly Ocean. This event is free and open to the public.

As an exhibit title, The Portrait and Landscape in Contemporary Photography might sound monotonous. But it’s not. In fact, Castell’s vision is far from it, making that label almost tongue-in-cheek as it re-imagines these definitions through the works of five photographers.

While each of these artists fulfill the parameters of portrait and landscape photography, doubtlessly the medium’s two biggest mainstays, they do so in strange and inventive ways. Together they reconfigure the human form and psyche, physically obscure it with biological diagrams and even transform it into type of stage prop. Would-be monumental landscapes are also subject to the strange. Trees and shrubs take on prismatic light-bending qualities. Or possibly psychedelic. Meanwhile, mountainous scenes have been reconstructed from household breakfast items to create agricultural landscapes that could possibly grow the very foods they are made of.

Of note are Aline Smithson’s portraits of her mother. The images are selected from a larger group of 20 photographs that capture her in the same format as Whistler’s famous “Arrangement in Green and Black, Portrait of the Painter’s Mother,” otherwise known as Whistler’s Mother. In these “Portraits of the Photographer’s Mother,” Smithson swaps out Whistler’s traditional framed wall painting, black dress and white bonnet for the likes of a strait jacket, a rubber ducky and a clown suit, among other garb. Another image shows her dressed like Elvis and seated in front of a velvet portrait of the king himself.

Barbara Ciurej and Lindsay Lochman, who work in tandem, employ landscape photography to illustrate a growing disconnect between agriculture, processed food and you, the consumer. They do so by making their own landscapes out of sugary breakfast cereals, bologna and sliced white bread. In “Fruit Loops Landscape,” which is part of their series Processed Views, they’ve built a replica of California’s Albion River out of fruit loops and sugar that surround a river of milk. In a sense, these and the other processed views of sweetened and salted terrains — corn-scapes and marshmallow chasms — share in the exhibition’s imaginative grasp on the unreal. And like each of the show’s neighboring works, they’re simply fun. 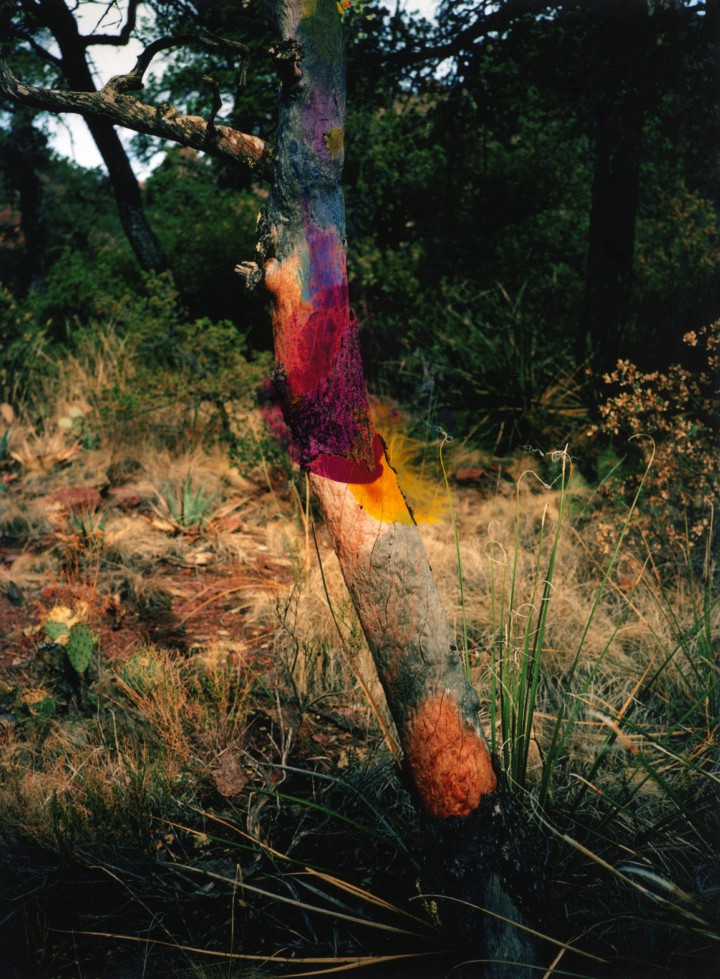 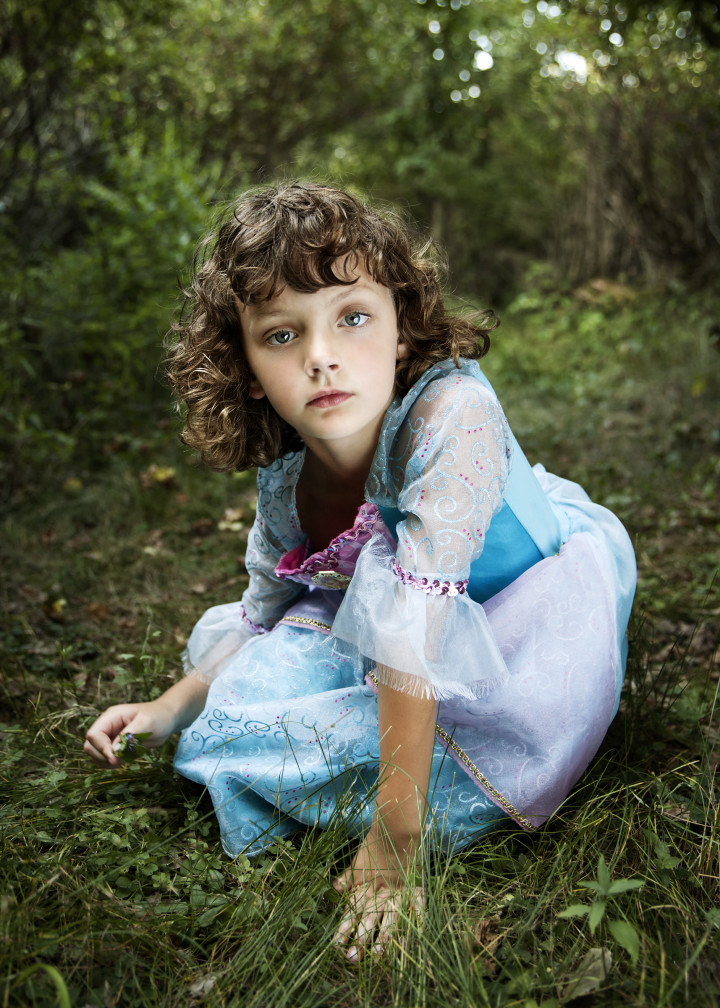 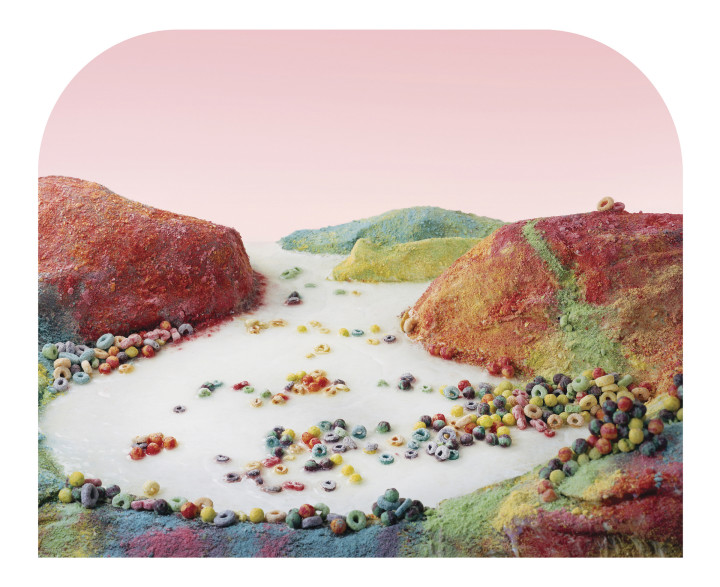 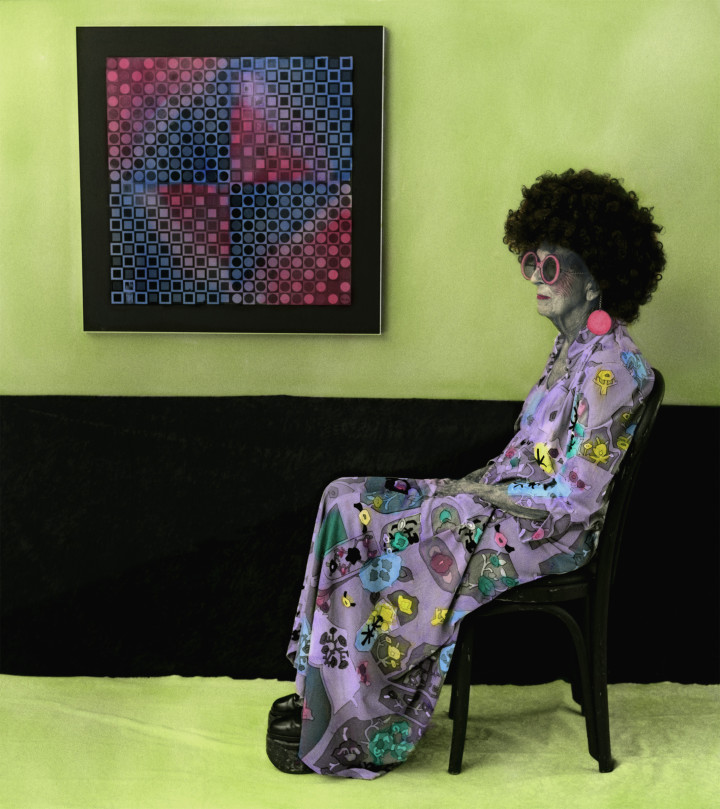 Photograph from Aline Smithson’s “Arrangement in Grey and Black: Portrait of the Painter’s Mother.”

If Castell’s show breaches reality to embrace the visionary, then Coming Into Focus, Blue Spiral 1’s new all-photography exhibition, surfaces for a lucid and occasionally alien glimpse. The show features the works of seven Southeastern photographers with eyes for personality, idiosyncrasy and sense of place.

The photographs that employ portraiture do so in a manner that sinks viewers into the households, neighborhoods and side-show spectacles of their subjects. Tammy Mercure sheds light on roadside attractions in Pigeon Forge, Gatlinburg and Cherokee. The works largely skip over the actual attractions, looking instead at the personal affects of the attendees: a cheeseburger patterned t-shirt, pearl handled pistols and a torch made of several Budweiser cans. Together they blur the lines that divide costumes from everyday attire.

Others are obscured, literally, by costume, as in Kristin Skees’s works. Skees photographs couples posed in their homes and surrounded by their belongings. Each figure is sheathed in a body-length knit stocking that matches the colors and patterns of their environs. Kelly green caps match the color of a porch railing in one, while one couple’s affinity for silhouettes is mirrored in their own black-and-white body stockings.

Isolation forms an undercurrent for many of the works, either through environmental dilapidation or the complete absence of human life in others. Works by Shane Darwent and Jeremiah Ariaz separately explore deteriorating and boarded-up architectural surfaces, namely in the post-2008 financial collapse. Each is intensified by its lifelessness, which brings out the physicality of the facades.

Many of these scenes and portraits were shot regionally. The terrains are well-known, the cities may be familiar. But it’s each of these artists’ attention to a nameless, atmospheric vacancy that collectively takes shape and gives the show a powerful sense of domestic exploration. 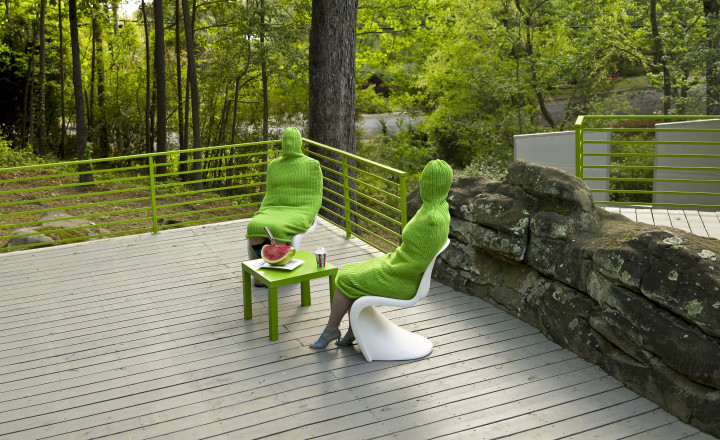 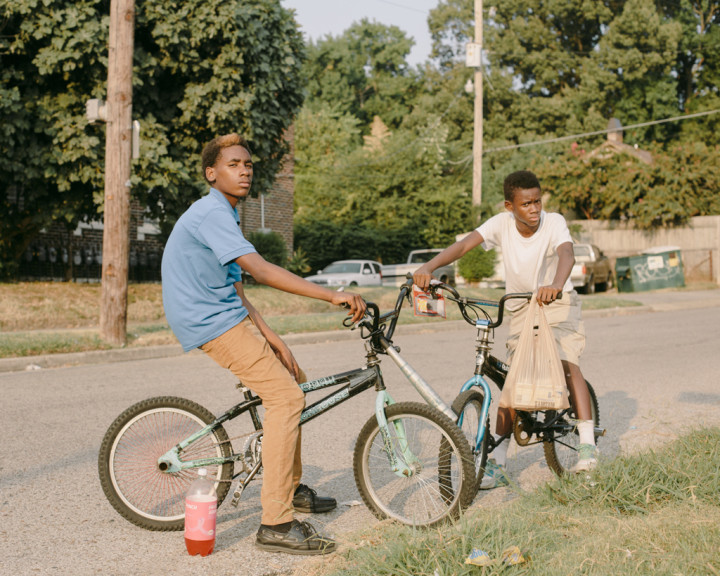 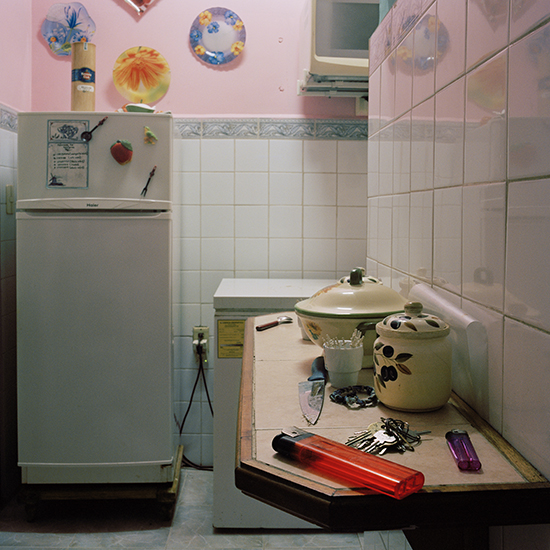 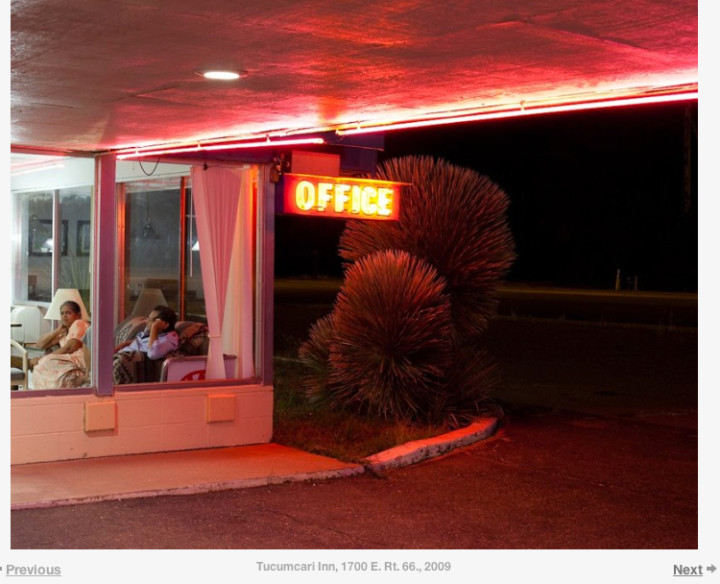