Presented by Asheville nonprofit organization Just Economics, the annual Just Brew It homebrew tasting and competition had another successful run June 4 at Wedge Brewing Co. Over 150 beers were poured by 44 brewer groups, and at the end of the afternoon, a handful of entries stood out among their talented peers.

When Aaron Fish makes a beer, its name has often been jotted down months before and in many cases has inspired the corresponding creation. A huge music fan, the Swannanoa homebrewer keeps a log of potential names that are either a play on lyrics or a lyric straight out of a song; then considering the season and the beers traditionally fitting that time of year, he pairs them up.

For the third straight Just Brew It and on the heels of 2015’s Which One Is Pink? pink peppercorn saison and 2014’s Set the Hops for the Heart of the Sun, Fish named a beer in honor of Pink Floyd. The Asheville Brewers Supply Award recipient Space Cadet Glow IPA with Citra hops was inspired by “In the Flesh” from The Wall. Continuing the musical trend, Fish’s People’s Choice champion, Crunchy, Crunchy Carrots double brown ale — made with rainbow carrots, Madagascar vanilla beans, ginger, nutmeg, cinnamon, cloves and brown sugar — has its roots in Gorillaz’s “Super Fast Jellyfish” and the Fitter, Happier, More Productive saison with fresh mangoes is a reference to the Radiohead song of the same name.

As those concoctions suggest, fresh ingredients are a priority for Fish, though he admits that such a commitment is often a high-risk, high-reward undertaking. “Natural ingredients can be really tricky. You can do too much; you can not get enough flavors. The mango’s an example — I thought it could use more mango taste,” Fish says. “On the flip side, one year I did blueberry beer, and it tasted awful, so you never know what you’re getting into with fruit and fresh ingredients. It’s a little bit of a challenge.”

Mindful of the typically hot weather that accompanies Just Brew It each year and wanting to offer a decent selection of styles, Fish went with a light, drinkable saison and a refreshing IPA. The annual “weird beer” for his fifth time pouring at the festival, Crunchy, Crunchy Carrots was met with enthusiasm from attendees, and news of “the carrot beer” quickly spread to the point that his supply ran out three hours into the event.

“Usually I’ll have a little bit left of every beer. I even stuck a bottle back just in case, and I had to crack it open because people were just like, ‘I gotta get the carrot beer,’” Fish says. “It was pretty cool, though. It’s nice when people appreciate it. And there were even people that were like, ‘Hey, this is not something I’d probably buy, but it works. You pretty much nailed what you were trying to go for,’ so that was a cool thing, too.”

Kings of the Mountain

Add an “s” to the end of Jesse Helm’s name and he and brewing partner Tyler Perry bring to mind one of the most unusual celebrity pairings imaginable. Keeping his name as is, the two Mills River homebrewers’ Coffee Table dark English session ale wowed the two Mountain Xpress judges more than any other Just Brew It entry and won the inaugural King of the Mountain award.

For their first time pouring at the festival, the regulars at homebrew socials hosted by Hops & Vines and Asheville Brewers Supply — where they purchase most of their supplies — sought to feature balanced, drinkable beers that showcase their comfort with a range of styles. Reflecting Helm’s love of hoppy beers, Grovestand double IPA was their first selection. Initially made exclusively with Citra hops, Nelson was later added to provide what Perry calls a “sweet fruit bomb.” Next to make the cut was One Sour Love, a blended golden sour and the product of two years’ worth of work with that style.

Coffee Table was actually their third choice. The batch marked the ninth time they’d made the base recipe, but the first time they’d done so with coffee, an ingredient rarely seen in their creations despite Helm liking a good cup of joe as much, if not more than, beer. In keeping with their focus on local products, the brewers used a blend of primarily Biltmore Coffee Traders’ Colombian roast balanced out by Dynamite Roasting Co.’s Black Powder Espresso.

Last on the list was the Bosco imperial chocolate porter, which marked the first time they’d used cocoa nibs in a brew, but even with a varied selection, traffic at their table started slowly. Perry’s theory is that the lack of description beyond each beer’s basic details in the festival’s program, and the popularity of Janeen Hulbert’s station on their right and Brad Schepers’ on their left, resulted in people initially skipping their selections. But  positive buzz eventually made its way through the crowd. “I started to notice it toward the end of the day, a little bit,” Helm says. “One specific girl came back four times to get the chocolate porter. I was pretty excited to see that.”

Looking ahead to the 2017 festival, Helm and Perry are leaning toward bringing more session offerings — possibly a pale ale — to satisfy attendee requests and would love to offer a well-done lager, a style with which they’ve not experimented much. They also may package next year’s sour in bottles instead of a keg to make pouring the higher-carbonated brew easier.

But regardless of what they bring, they’re excited to return. “It was a lot of fun, and there was a lot of good beer,” Perry says. “I wish there were more events like that in Asheville.”

Photo gallery from Just Brew It 2016 by Scott Douglas: 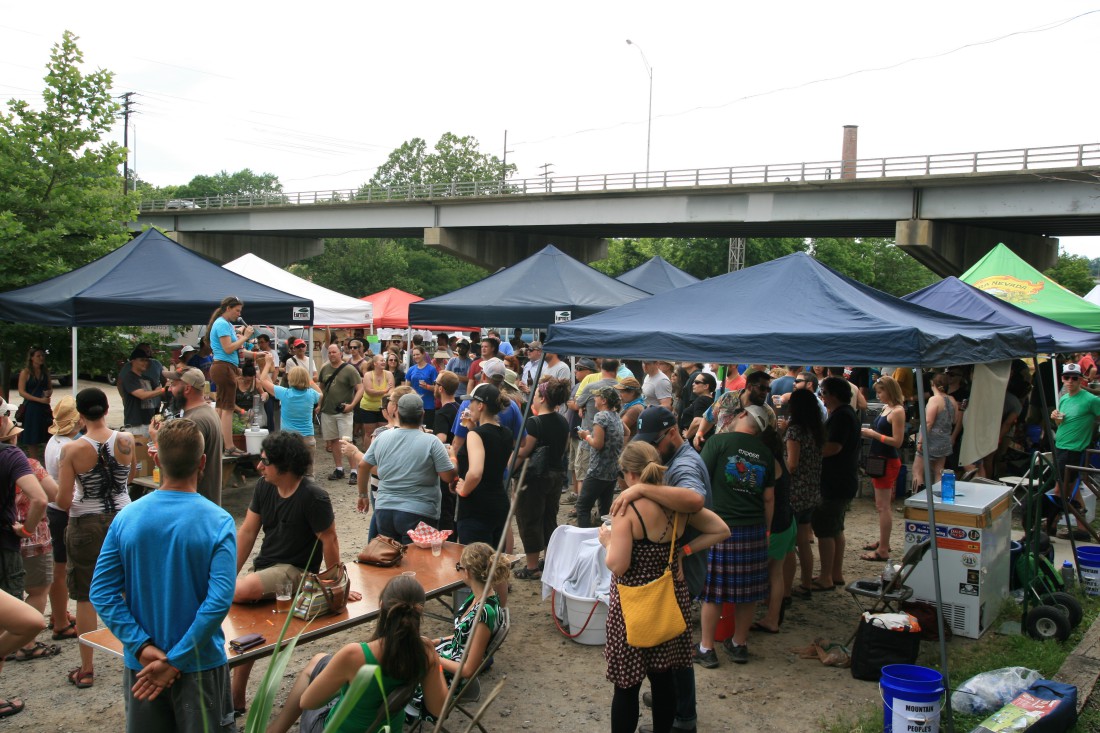 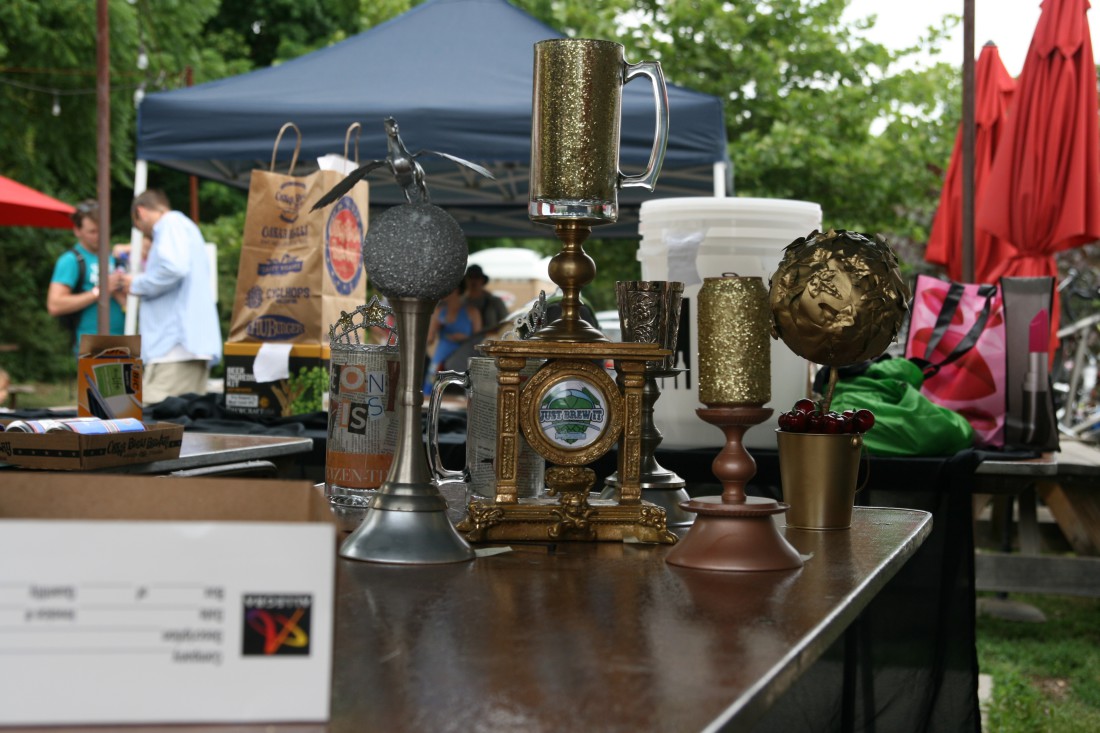 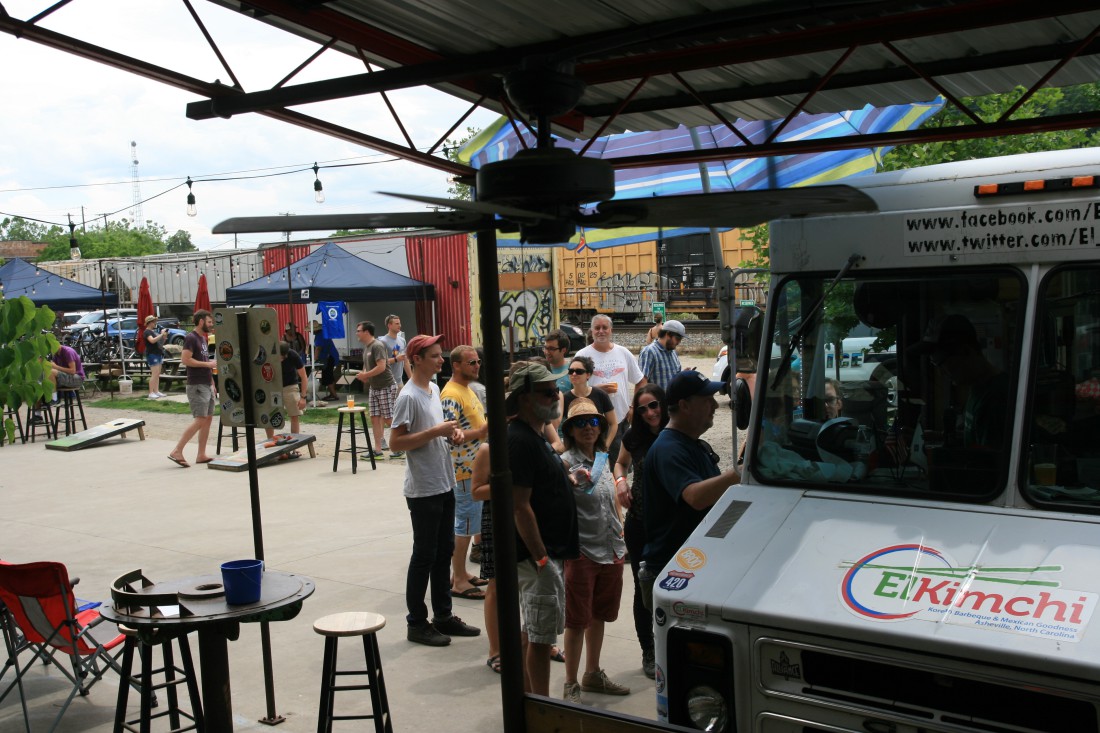 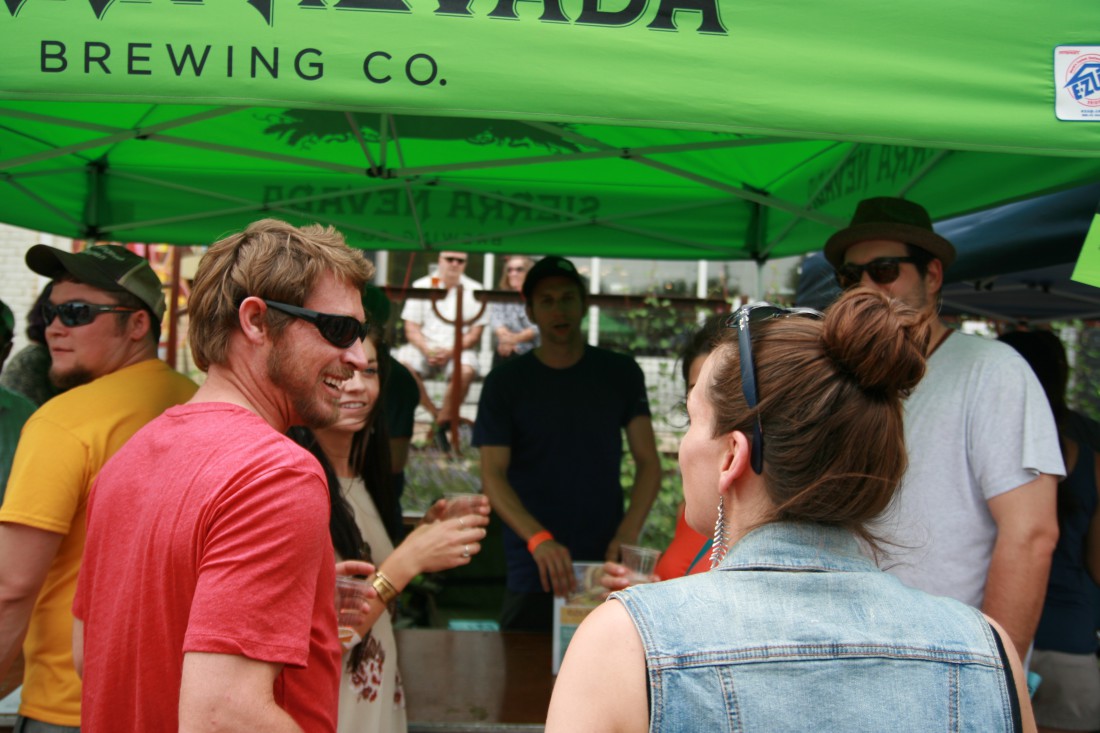 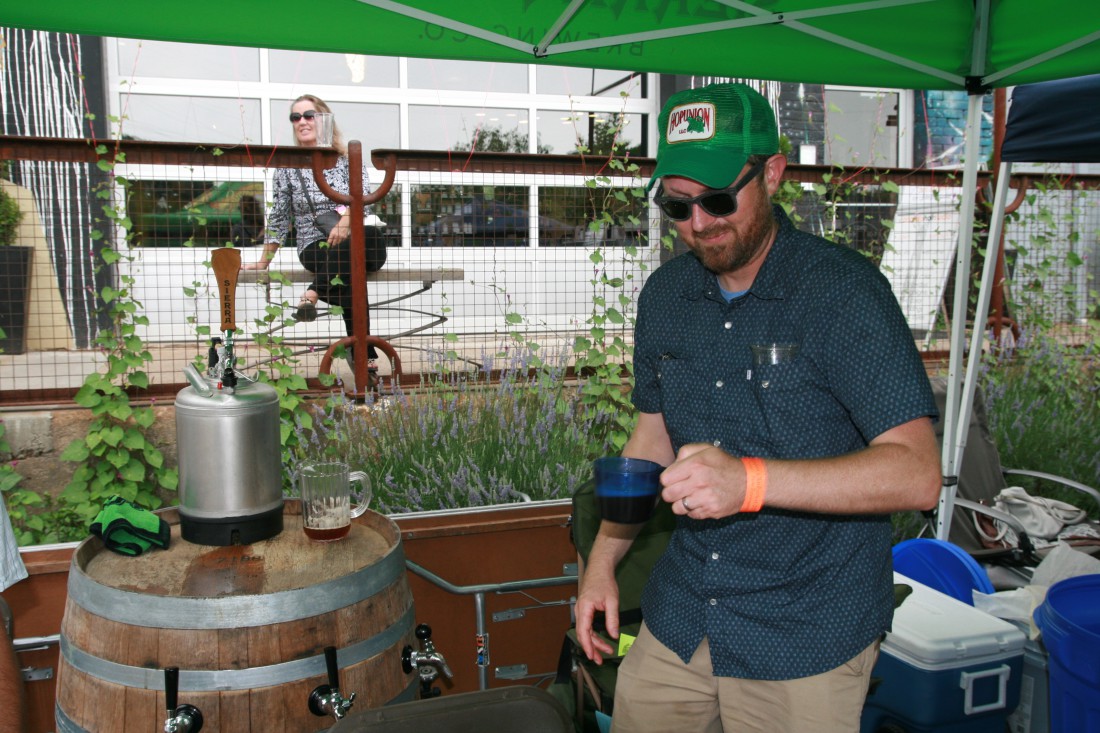 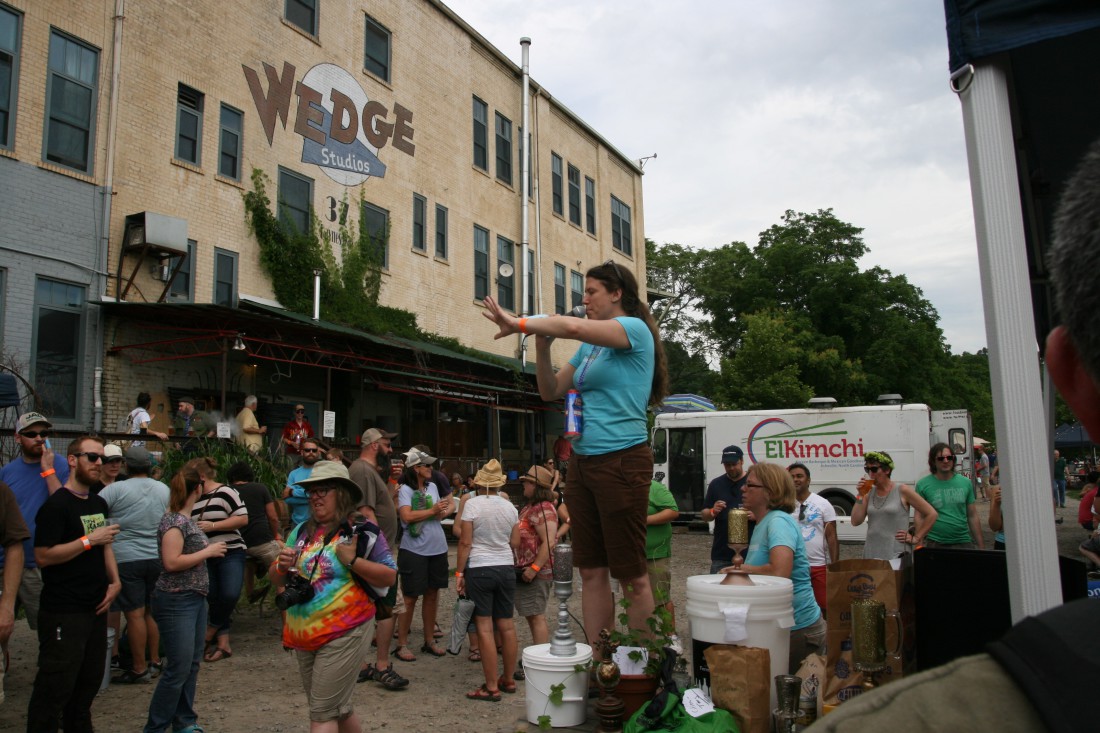 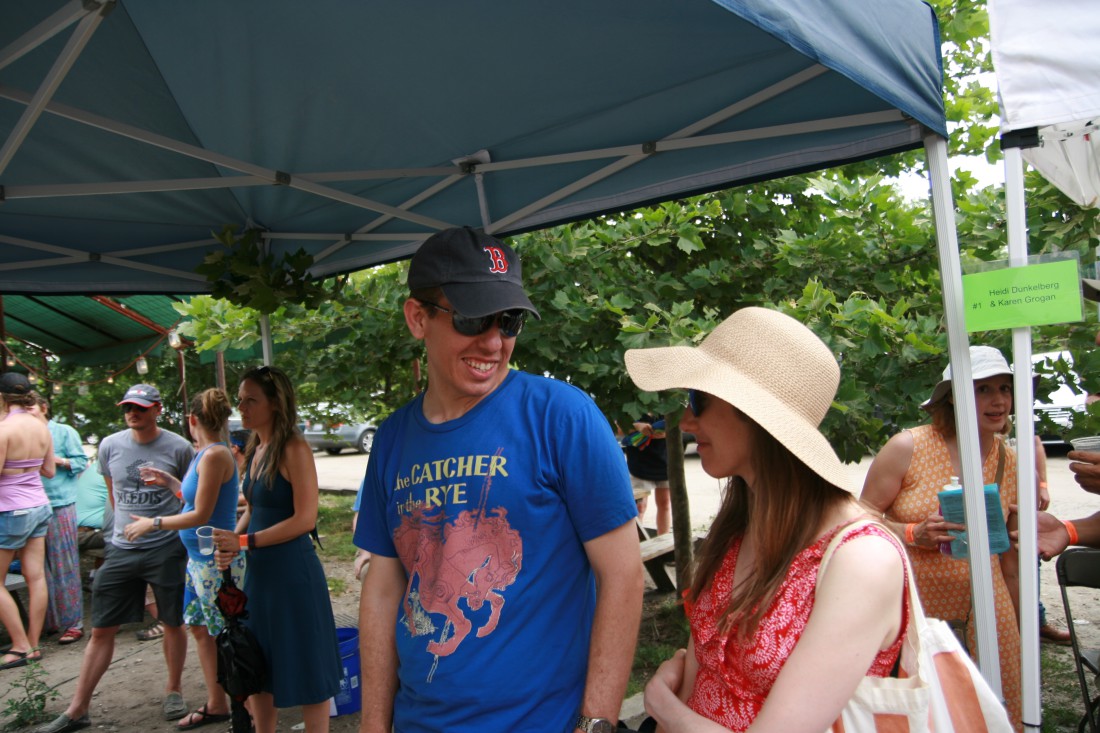 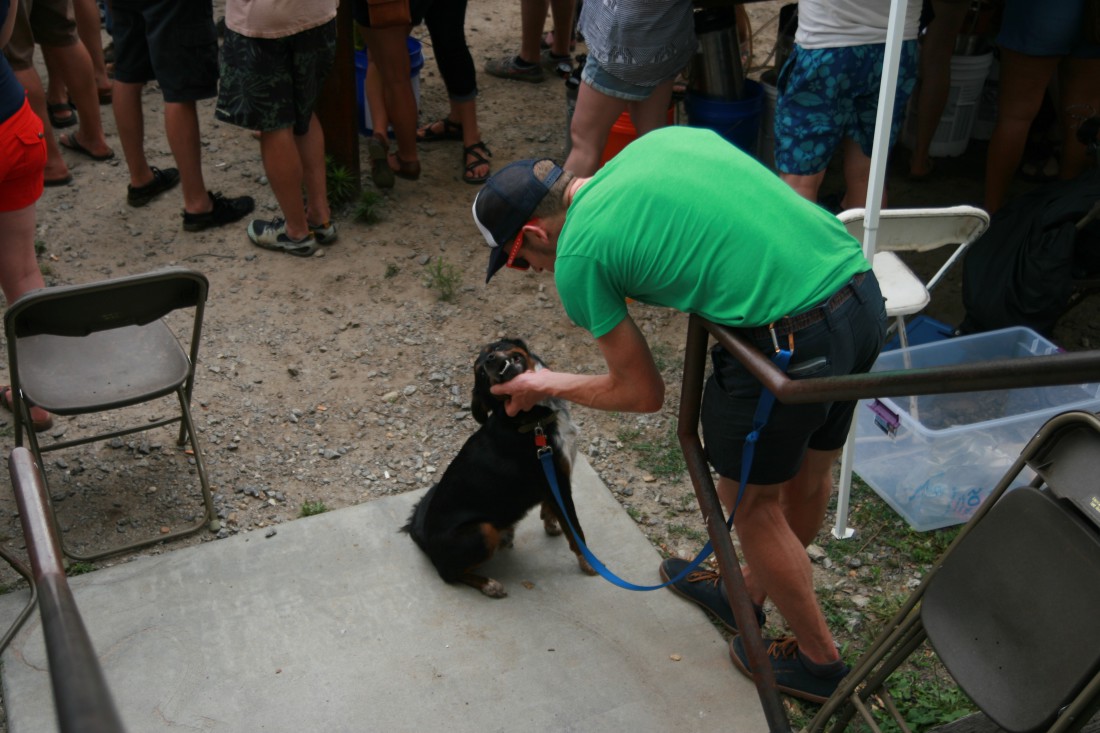 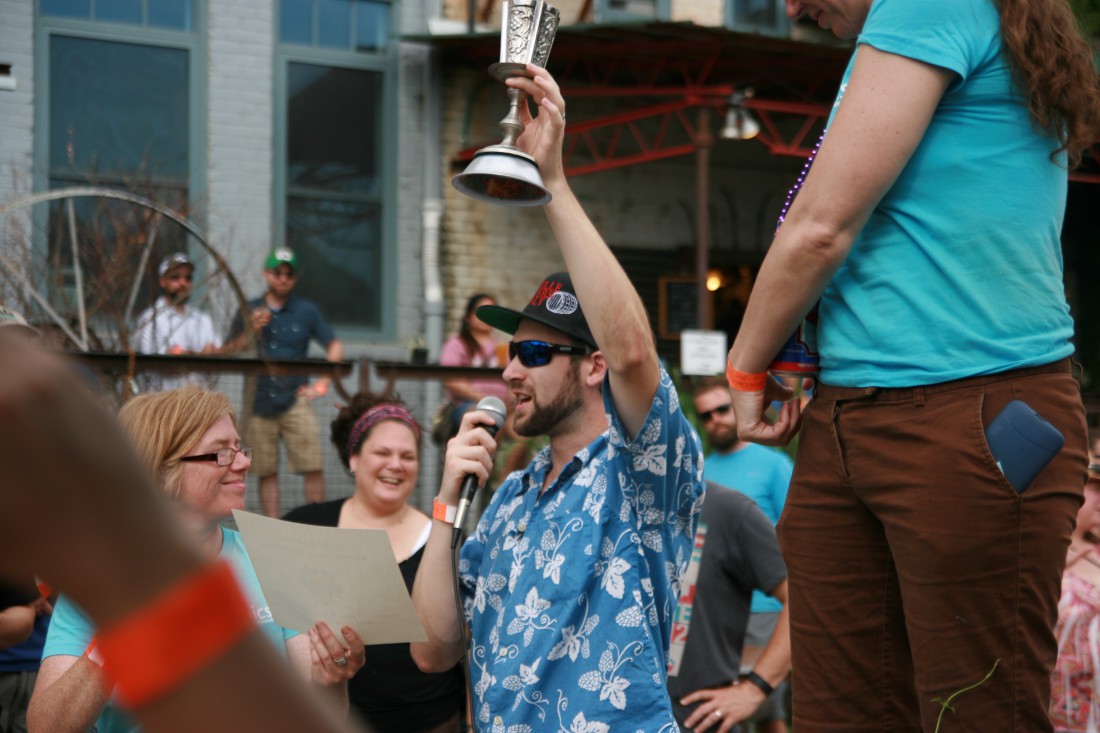 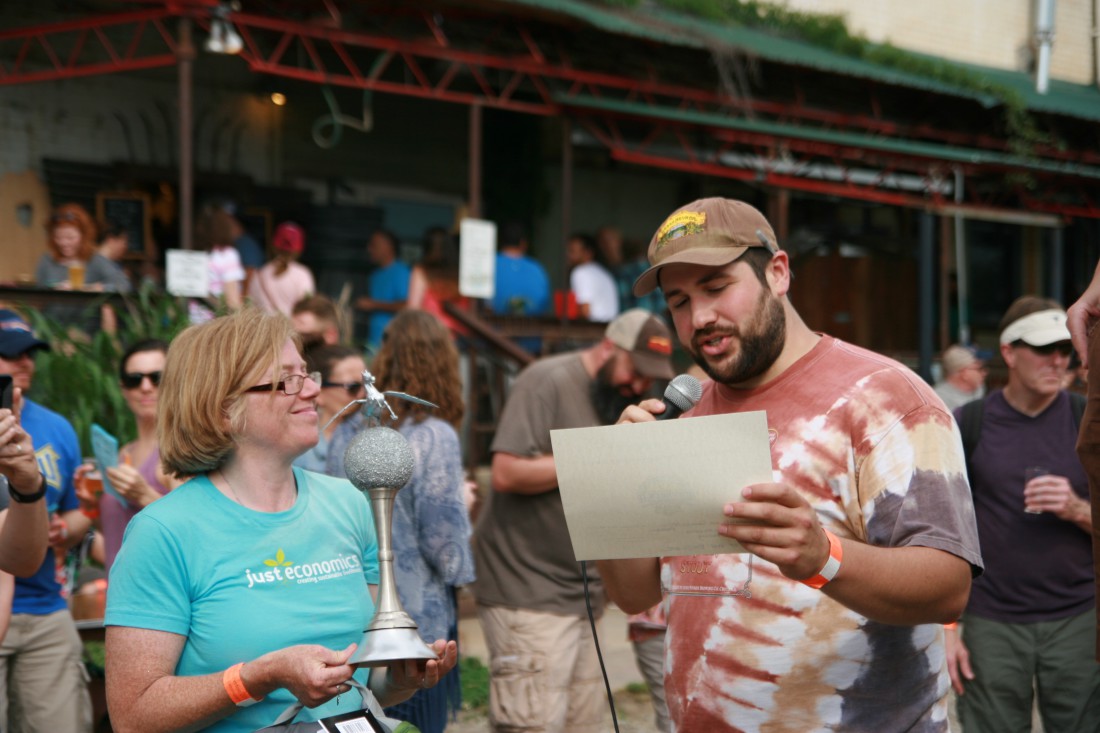 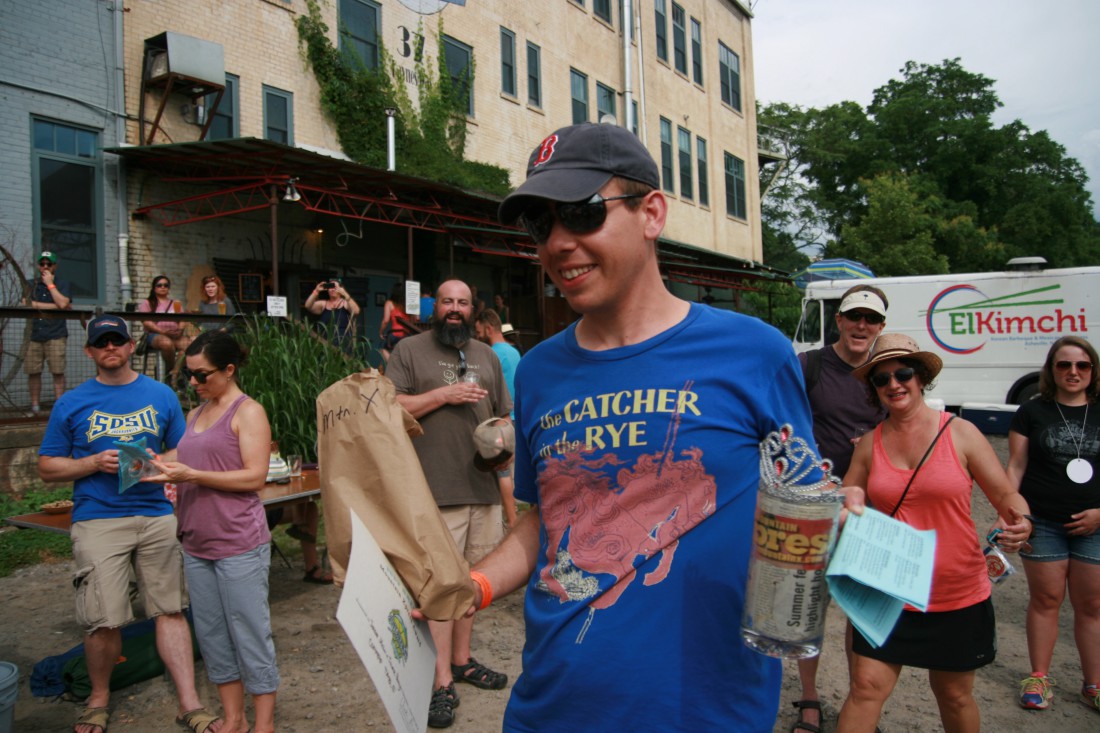 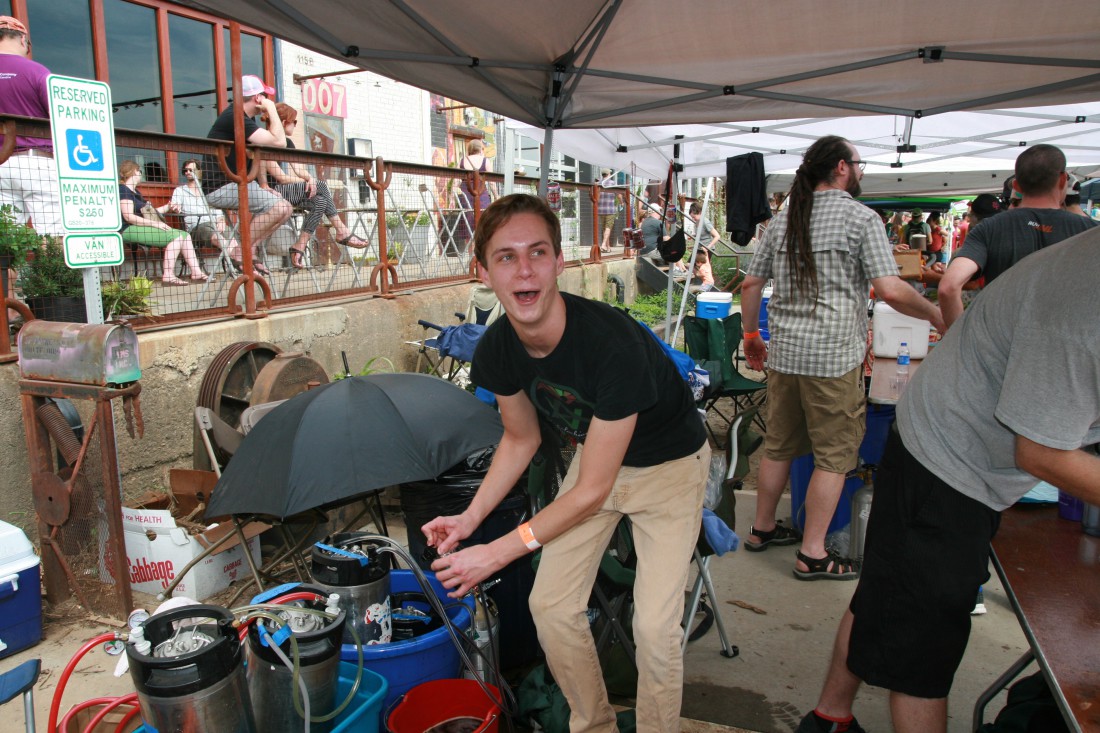 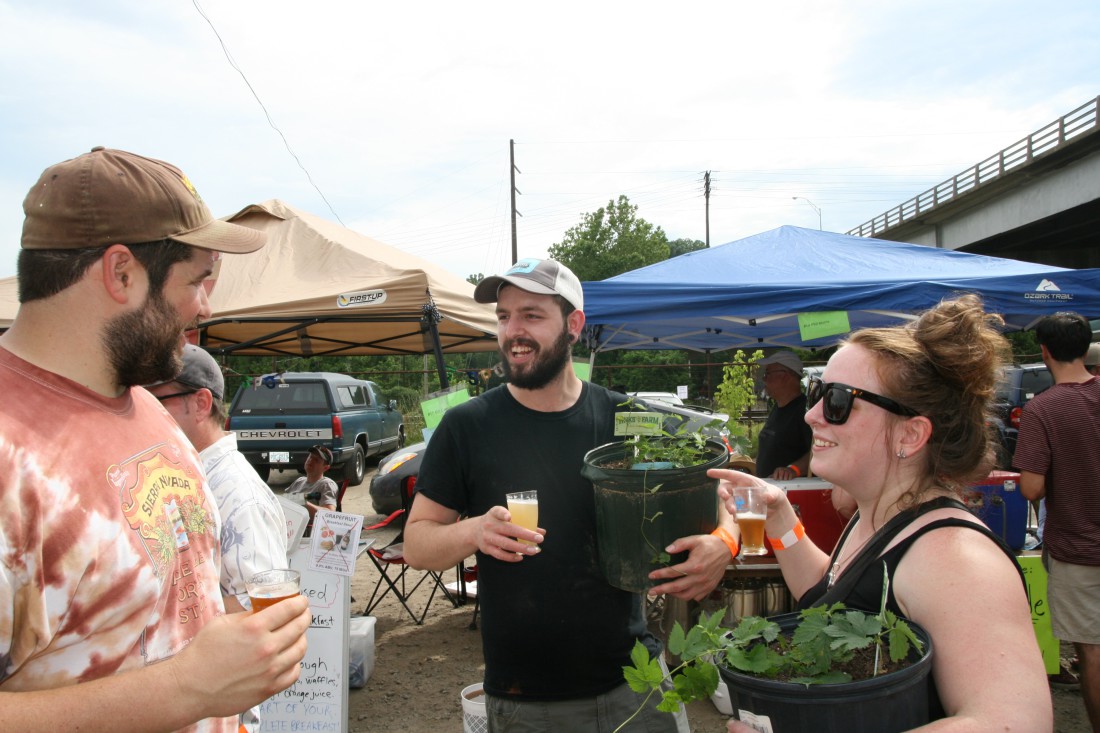 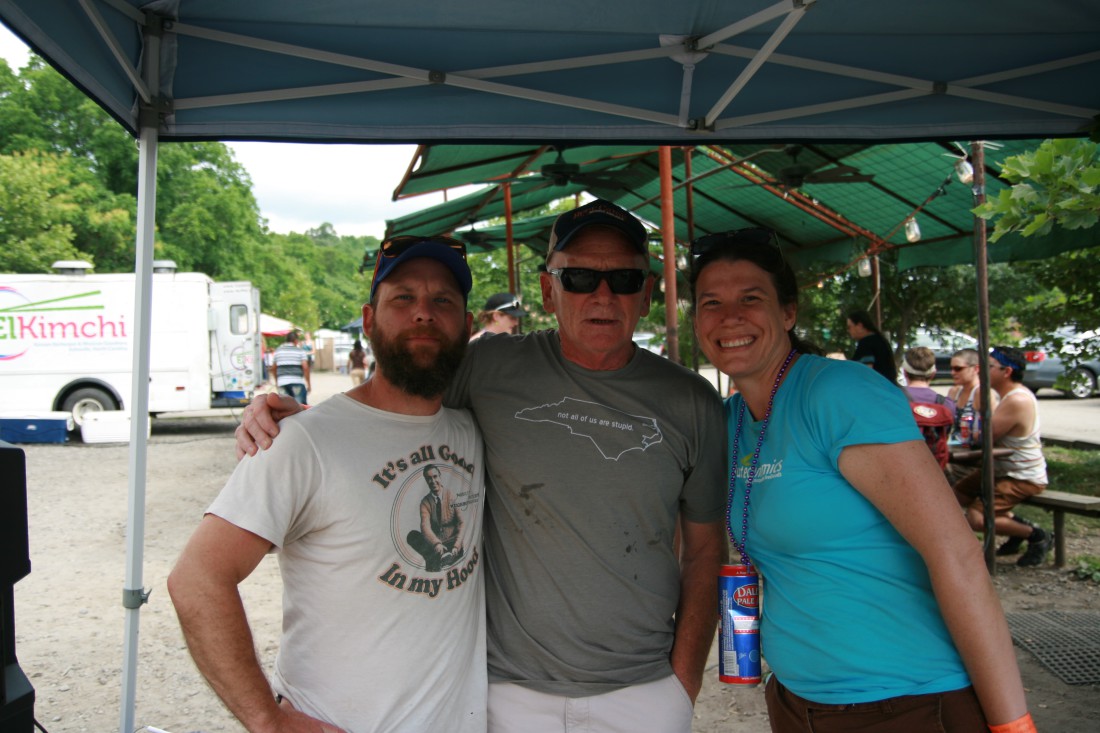 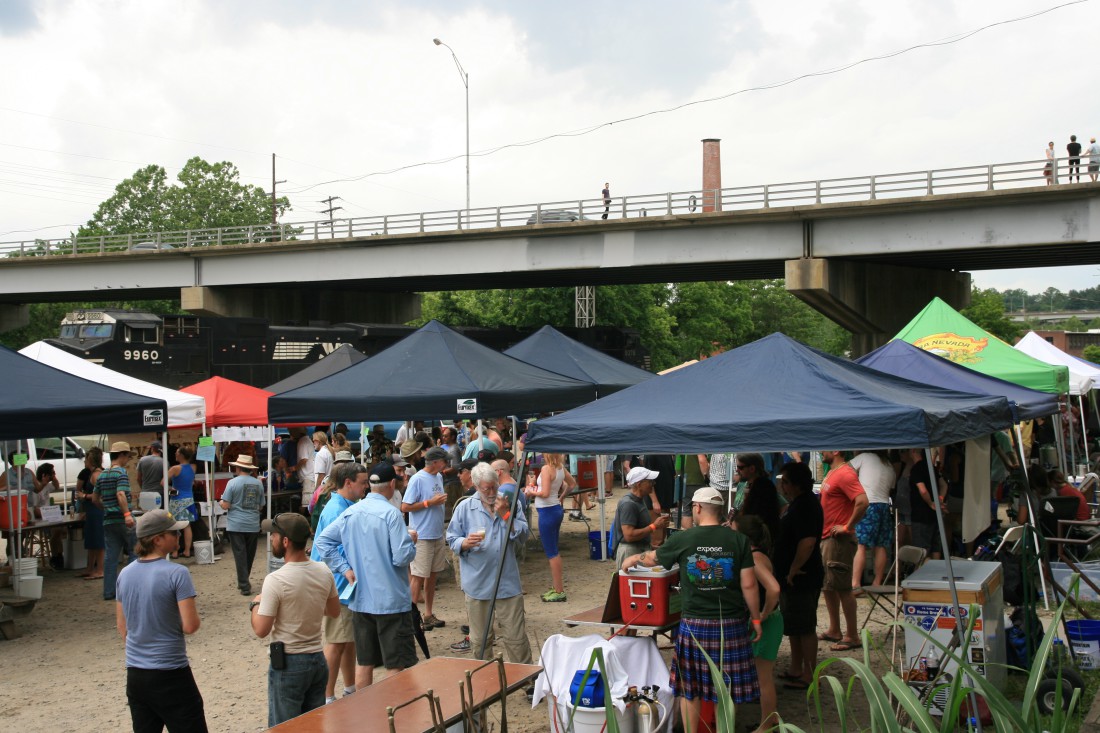