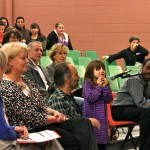 SPEAKING OUT: A Hall Fletcher student named Lydia aired her concerns at the March 18 meeting of the Nutrition Committee. "I don’t think all that sugar is good for all my friends and all the other kids in this school," she said. Photo by Micah Wilkins 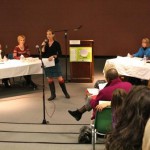 It all started with a letter from an 8-year-old to his school principal. “I wish the cafeteria were healthier,” wrote Liam Miller to Gordon Grant, Hall Fletcher Elementary’s principal. As a third-grader, Liam struggles with reading and writing, and his mother, Misty Miller, who knew that “every sentence of that letter was a struggle for him,” took notice.

Last fall, Miller decided to form a group called the Nutrition Committee to look at ways to improve the cafeteria food at Hall Fletcher and other Asheville City Schools. On March 18, the committee held a community meeting to discuss parents’ and teachers’ concerns about the health and nutrition of meals served at Asheville schools. About 60 parents, teachers, school-board and City Council members attended the meeting held at Hall Fletcher Elementary in West Asheville. The Hall Fletcher PTO also invited Beth Palien, the nutrition director for Asheville City Schools, to hear and respond to parents’ concerns.

Lunch is served to students throughout the district, but Hall Fletcher is the only one in Asheville City Schools with a universal breakfast program. With nearly 80 percent of its students qualifying for free or reduced-price lunches, Hall Fletcher Elementary implemented the program last year, which provides free breakfast for all students, regardless of income. While many parents appreciate that the program is in place, “we are concerned that our children’s health and ability to learn is being negatively impacted by the highly processed, sugary, low-nutrient foods,” said Nutrition Committee member Alison Gooding.

Breakfast foods that are high in sugar cause a spike in energy, and then a crash later on in the day, as second-grade Hall Fletcher teacher Carrie Rabuck has observed. “If the kids are given cinnamon buns in the morning, it’s more challenging,” she says.

While only Hall Fletcher has the universal breakfast program, the lunch menu is consistent for all Asheville City Schools, and menu items usually consist of highly processed and frozen lunch foods like chicken nuggets.

“There’s a lot of empty calories there,” says Miller. Parents at the meeting advocated for more fresh ingredients to be added to school menus, and Hall Fletcher’s garden teacher even suggested collaborating with Palien to incorporate produce from the garden into the meals. “I’m so grateful for the lunch program, but I would be even more grateful if local produce came in,” said one mom at the meeting whose three children attend Vance Elementary.

Palien develops the menus for all Asheville City Schools for the entire school year and must adhere to federal, state and district regulations. And while a Pop-Tart may meet the minimum federal requirements for a serving of fruit and a serving of whole grain, it doesn’t quite cut it for some parents.

During the meeting, parent LaVette McDaniel proposed that a committee be formed to advise Palien as she develops the next school year’s menu. The committee would help the nutrition director replace processed and sugary foods with whole foods like fresh fruits and vegetables. “I’d appreciate any help I can get,” Palien said, followed by applause. But, she said, an advisory committee must be approved by the school board first.

Incorporating healthier options into the breakfast and lunch programs may be more expensive, Palien said, which could hinder some changes to the menu. “I’ll have to do some price costing to see if the funding is available,” she said. “It all depends on cost.”

Palien and the Nutrition Committee are scheduled to meet at the end of April to discuss future changes in school menus.

“I’m not going to stop the fight,” Miller said, “until we get food that nourishes our kids’ bodies and minds.”