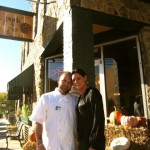 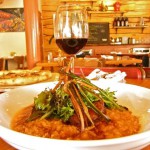 GETTING CHEEKY: Pork & Pie’s pork-cheek risotto is made with locally sourced meat and served with sauteed mustard greens and leeks. Courtesy of Jordan Foltz

For well over a year, quirky and artistic downtown Marshall was without a full-service restaurant. The old stone building at 18 N. Main St. — which used to house Bacchus Bistro and Stone House Pizza — remained vacant from early 2012 until this summer, when Marshall’s culinary drought officially ended as Jaime and Deena Hernandez moved up from Baton Rouge to open Pork & Pie.

“We chose Marshall because of the quaintness of the town,” says Jaime. “It was almost unfinished, which was neat to be part of. And the people — they’re really down to earth, and kind of … weird, in a very cool way.”

After a two-year stint as executive chef of Juban’s, a top Creole restaurant in Baton Rouge, and many years in old-school Sicilian kitchens in Louisiana, Hernandez knows how to layer traditional flavors like an alchemist. At Pork & Pie, he's bringing on the Creole/Italian fusion in its full glory.

“The response has been great, especially as far as the food goes. There are a lot of spices and things that normally a chef from my [background] would take out of the food if they moved to a new area — because they have a fear of people’s palate. But I just kept it true. Everything that I do Creole — the gumbos, étouffées and other traditional foods — are done exactly the way I did them in Louisiana, and I think that’s the reason we’ve been so well-received.”

For the Hernandezes, the venture is all about integrity: making sure the restaurant is a cultural and economic asset to the community while also striving to source ingredients as locally as possible.

By the time he left Juban’s earlier this year, Jaime had the restaurant sourcing 70 percent of its food products from within a 125-mile radius. His aspirations are the same for Pork & Pie. Already, the restaurant’s gathered goat cheeses from Spinning Spider Creamery and Three Graces Dairy; corn grits straight from Blue Hill Farm; seasonal vegetables from High Gate Farms and Long Valley Eco-Biotic Farm; pork and eggs from Dry Ridge Farm; and charcuterie items from Hickory Nut Gap.

“It’s hard to break the mentality of 'meat and potatoes' that’s focused less on quality and more on quantity. What we concentrate on here is quality and integrity,” says Jaime.

And surprisingly, though the Hernandezes have the artistic flair and high-quality ingredients that one could expect with fine dining, none of the entrees on Pork & Pie’s menu exceed $14.

“We’re not trying to push anyone out. This is for the community,” he says.

Though Jaime left the fiercely competitive culinary world of Louisiana behind, Pork & Pie’s menu is evidence that landing in Marshall by no means mitigates his creativity. Items like the homemade lobster ravioli with moonshine cream and the seasonal wild-mushroom pappardelle fuse local mountain themes and ingredients onto a Creole template.

“I believe in simplicity,” says Hernandez. “That’s the Italian way of doing things. But it’s integrity-driven — the ingredients have to be really high quality.”

“Simple” in this case is certainly not to be confused with bland or conventional; it’s more about limiting the ingredients to allow each to carry its own immaculate essence.

In addition to the Creole/Italian entrees, there are an assortment of artisan pizzas to choose from, each of which has a unique blend of toppings — “but never more than five,” says Jaime. The “garden” pizza features roasted local vegetables, lavender, chevre and pesto. The “rooster” combines pickled corn, farm eggs, roasted sweet peppers and bacon on the pie.

“We’ve got people coming from all over the place just by word of mouth. Locals come for sure, but also people passing through from Leicester, Burnsville, Tennessee — people with second homes here. It’s good for the town. And that’s my goal: to make Marshall more of a food destination.”

Leave a Reply to Glen Lehman ×