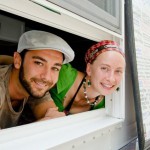 REALITY IN THE RAW: Since opening in August, Roaming in the Raw food-truck owners Zack Bier and Jenni Squires say they have encountered both challenges and creative freedom. Photo by Max Cooper 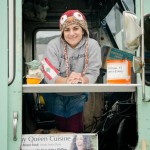 Have you ever thought of owning a food truck? The freedom! The creativity! The possibilities! True, but there are also: Regulations! Tight spaces! And burnout!

We caught up with two local food-truck purveyors — Jenni Squires and Zack Bier from Roaming in the Raw and Suzy Salwa Phillips from Gypsy Queen. We wanted to see the profession through the eyes of someone brand-new at the business (Roaming started in August) and someone who’s been doing it awhile (Gypsy Queen launched in April 2010).

Here’s what they had to say:

ROAMING IN THE RAW

Mountain Xpress: What has been the biggest surprise of operating a food truck?
Zack Bier: How much more it’s wound up costing than we originally thought. We thought we were going to get our equipment from places like Lowe’s and Ikea, and it seemed really affordable. But then you have to go to the health department, and they pretty much told us that nothing we’d planned on was approved. Then we started looking at National Sanitation Foundation-approved stuff and realized that this fridge is four times more expensive than the other one. The same held true for every other appliance.

What about the ingredients? Did they fall within your budget?
Jenni Squires: Ingredients for us has been interesting because we have very limited space and we’re trying to keep everything very fresh. I’m trying not to make a bunch of stuff and then put it in the freezer, because it doesn’t really work that way. So it’s been a lot of trips to farm stands and markets. Every week I spend almost as much time getting food as I do making the food.

You’re open four days a week. How does that suit your lifestyle?
Bier: If you’re open four days, you’re still working seven. There’s so much prep involved, especially with what we do. It just takes hours and hours.
Squires: A lot of the recipes aren’t like, “I’m going to make this right now and it’s going to be ready instantly.” There’s lots of planning, especially if something needs to be dehydrated. So sometimes, two days before I want to serve something, I have to start making it because it takes that long.

Talk to me about the reality of working in a small space.
Squires: I’d say when you’re working with someone who’s just a co-worker, you’re likely to be more considerate of their feelings and what you’re going to say. And when you’re working with your lover, partner, best friend, there’s no holding back [laughs]. … It’s important to have empathy for what the other person is doing.

You mentioned that you might like to work with local farmers, turning their unsold produce at farmers markets into healthy food for communities that might otherwise not have access to it. Was that always part of your plan, or is that something that’s grown out of the work you’ve done so far?
Bier: It completely grew out of it. That’s the cool thing about this — how many ideas that start popping in your head when you’ve done what you’ve set out to do and now you’re free to think. Now we have this template and don’t have to worry about that anymore, so we’re free to be a bit more creative. Like, perhaps a nonprofit component or a physical location.

Having done this for more than three years now, has it been what you’ve expected?
Suzy Phillips: Not at all!

What’s been different?
I thought it might have been a little easier than having a restaurant. But I was so wrong. You’re en route all the time. You’re not stable. You don’t have a place that you can turn the key, open the door and everything is right there in front of you.

Most of the time, because you’re small, you don’t have the luxury of purveyors dropping stuff off for you. So you have to meet the vendors, go to the commissary, prepare your food, go to your day spot, go back to your commissary, empty your gray water, go back to your night spot. It’s just a constant chasing-your-own-tail kind of thing.

Also, we don’t have the luxury of shelter. I thought people would be a little more excited about food trucks and really out seeking us, more so than they have, like in a bigger or more progressive city (which I thought we were). But if it rains, we don’t do well; if it’s cloudy, we don’t do well; there are no seats, there is no shelter … and that’s still a struggle.

I didn’t really expect all of that. I thought, “Hey, I’m gonna hop in my truck, I’m gonna sell my falafel, and I’m gonna shut down and it’s going to be limited hours.” You still put in 70 hours a week, even though it’s a small operation.

How have things changed from your early years?
I used to have a different falafel for every day. I’m not that inspired anymore. [laughs] I’m just exhausted. And you know, with fatigue, the creativity kind of fades away.

What’s an ongoing challenge you might not have thought about?
The truck breaks down often. It broke down on me yesterday. And if it breaks down, I don’t operate. It’s not like if my dishwasher or hood breaks down. This is my entire little restaurant on wheels.

What’s next? Five more years?
Oh no. Not five. I can see doing this for another year or so. Just because I want to be more creative. I want to have more toys to play with. Right now I can’t have a shawarma machine and serve a proper shawarma. I can’t have another fryer to fry meat or fish in because I keep it strictly vegan. I want to do all those things. And then I’m also thinking that I’m getting older and older, and my body’s breaking down, and I don’t have time to exercise and keep it strong.

I would love to open up a hole in the wall, but I’m still poor. I was making more money waiting tables than doing this. I still face the no collateral, no capital, no money in the bank, no co-signer situation. Everybody knows my story: We moved here from Lebanon with nothing, and we still have nothing.

But my next vision is bottling my sauces. That is more of a reach-on dream. I can start small and go from there. Maybe earn enough to just take care of my mom and myself.

What keeps you going for now?
It’s still fun; I still love to look at people’s faces and see that my falafel or my goat stew changed their life. That’s a confirmation and reassurance that I’m doing something right.

View all posts by Michael Franco →

One thought on “The real deal”