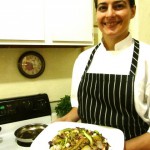 PERSONAL TOUCH: Through her personal-chef business, Bountiful Dish, Stacey Taylor strives to give families opportunities to try a wide variety of food. Photo by Jordan Foltz 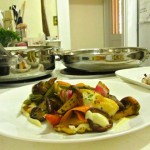 HEAT-UP GOURMET: Personal chef Stacey Taylor makes entrees like her sea bass with cauliflower puree and pan-roasted chanterelles in her clients’ own kitchens and packages them to be reheated later. Photo by Jordan Foltz

For those who haven’t served time in food service, health regulations require that foods sold to the public must be prepared and stored in a commercially certified kitchen. The exception is when foods are prepared in a customer’s own home and stored for consumption on the premises. That’s how personal chefs roll: They show up with all of their own pots and pans, aprons, oven mitts, portable grills and other accoutrements to support their style, and they make the magic happen right there in your kitchen, packaging up entrees, side dishes and desserts in the refrigerator and freezer so you can just come home and heat them up.

Personal chefing is a fairly untapped business in Asheville. Generally, it’s an industry that has thrived more in larger cities that harbor swaths of busy professional families who don’t have time to cook, but either have palates that demand gourmet cooking or are just trying to salvage a family dinner among the scattered chaos of the digital age.

When Holly Hale, owner of the Savory Palate, first moved to Asheville in 2001, her friend said, “It isn’t what you know, it’s who you know, and you’re better off starting your own business.” This is a lesson that many learn in this small, quirky city
— you have to pave your own path and you have to build relationships.

It was when Hale found herself at a U.S. Personal Chefs Association convention a year after moving here that the idea occurred to her to start the Savory Palate.

For Hale, being a personal chef has allowed her to do what she loves best on a schedule that she can control. But it never really “took off,” she says.

To be sure, personal chefs are a benefit mainly enjoyed by those with a heftier bankroll. It may be the case that Asheville’s do-it-yourself culture didn’t support many personal chefs in the past, even if the income brackets theoretically would.

For Hale, the demand for her services has come mainly from one of two camps: people with dietary needs such as gluten-free, salt-free or even vitamin K-free foods; and people for whom she says, “it’s a novelty to have a personal chef. Like a ‘keep up with the Joneses’ type of thing.”

Surely it isn’t from Asheville’s lack of culinary enthusiasm that personal chefing has been a tepid industry here.

“What I love about Asheville is it’s such a foodie town,” says Stacey Taylor, who moved here from New York City a year ago and is just kicking off her personal chef business Bountiful Dish. She sees Asheville as fertile ground for her business — and the industry in general — to thrive: “All the feedback I’m getting is that people are really excited about it, and it makes me feel like it’s going to be a hit.”

Depending on whom you ask, the personal-chef concept seems either novel, or it recalls a very traditional bourgeois lifestyle, where the chef was just another family asset such as a housekeeper. Though Hale jokes, “Your target market is yuppies … who don’t want to stop by Whole Foods on their way home,” the service is accessible to many people who simply make eating well a top priority.

For that wider demographic, the concept is still pretty novel, and perhaps a little weird. Inviting someone into your space requires a lot of trust, and getting over that trust hurdle can be a stumbling block when some personal chefs are trying to create a successful business.

Taylor points out that building trust is part of her business plan. She hasn’t delved into the advertising world yet but has instead made other, more intimate efforts at outreach, such as organizing demos at Carolina Day School, and going door to door to introduce herself and initiate conversations with professionals at their offices.

“Because I’m going into other people’s homes … it has to be a very relationship-oriented, trust-building thing. So I think word-of-mouth is the best marketing, especially here.”

When she left New York, Taylor knew that she was going to do her own thing but wasn’t sure if it that meant opening a restaurant or a personal chef business.

“Mountain BizWorks helped me sort that one out,” she says.

For an entrepreneurial chef, opening a restaurant — or even a catering company — often requires upfitting a commercial kitchen. If you don’t start with a hefty nest egg, then installing a hood vent, gas lines, plumbing, refrigeration and washable floors and walls can quickly put you deep in the red. Personal chefs cut out 99 percent of those costs and still do what they love.

“The restaurant industry in New York has super-creative people — really, really passionate people who throw themselves into the creative aspects of what they do … push themselves hard … and they’re the best. I love being around that,” says Taylor, “But you are always working crazy hours, and because I want a family someday, I just felt like this would work for me better.”

Wrapping up a stint at the Gramercy Tavern in Manhattan, Taylor brings that same American seasonal ethos that values fresh, local foods to Bountiful Dish.

“Really bringing a standard is important to me,” says Taylor, “And also to bring variety. … The more that people engage with different types of foods, the more exciting it can be for a family.”

Taylor and Hale agree that the most rewarding aspect of their job — and the part that is most important to them — is making people happy; creating an experience for families to enjoy together.

Most of us know what it’s like to blaze through our day without taking a moment to sit and reflect, or to even notice the dynamic of our relationships.

“It’s a way to connect,” says Taylor. “It can be really challenging for people to sit down and talk, just talk, for a half an hour every day. And by missing that, you miss the most important times of your life with people that really matter.”