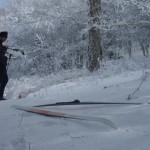 Snow traveler: The time-honored art and sport of cross-country skiing offers locals like Ross Prince a chance to get into the backcountry when trails are transformed by snow. Photos by John Thompson 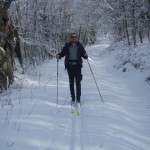 "Every mile is two in winter." So wrote 17th-century Welsh clergyman and metaphysical poet George Herbert, and it's easy to see where he was coming from. Anyone who’s ever trudged any considerable distance through even marginally deep snow knows full well that traveling through a snow pack is hard work and not easily enjoyed — unless, that is, one is cross-country skiing.

First developed in prehistoric times as a way to travel efficiently across the vast, snowy frontiers of the Scandinavian Peninsula and surrounding areas, cross-country skiing revolutionized winter transportation. By the 1850s, Norwegian and Swedish immigrants had introduced the sport to North America. Among the most notable of those pioneers was the legendary Jackrabbit Johannsen, who lived to be 111 and reportedly still glided through the snowy woods on a daily basis well past the age of 100.

Perhaps not surprisingly, Johannsen attributed his extraordinary longevity to his love of skiing. And indeed, these days, cross-country skiing is seen more as a recreational activity than a means of travel. The two aspects remain closely related, however, binding the sport to its roots.

Ready to hit those wintry trails? Here are some recommended cross-country ski destinations and places to gear up:

In the midst of winter, hiking to the snowy vistas and wind-swept summits of North Carolina's highest peaks and balds can pose daunting challenges. When the snow drifts high across the trail and the cold wind whips across the open fields, many fair-weather trekkers simply batten down the hatches and resort to indoor exercise.

But for avid hikers like Randy Johnson, the author of Hiking the Blue Ridge Parkway and three other guides to exploring the North Carolina mountains, cross-country skiing offers a chance to sample some of the best of what the region has to offer. The sport, he explains, “allows me to get into some of the most beautiful places around, places that you otherwise wouldn't be able to access. The total immersion you get in nature, particularly in the most spectacular winter locations, makes it just that much more enjoyable.”

And once you've mastered the various moves, Johnson notes, whole new worlds open up. “If you're one of those people who like hiking and you like physical exercise, cross-country has that physical element, certainly, but there are also the other times that you're going downhill, or you're going across the flats and you're striding and gliding, using different techniques, such as skating, and it becomes just a really rhythmic, sensual ski experience.” Compared with downhill skiing, he maintains, “It's much more diverse and all encompassing, and that's what I truly love about it.”

The same holds true for John Thompson, general manager of Black Dome Mountain Sports. When there’s snow on the ground and JT (as his friends know him) isn't hard at work, odds are he’ll be out on some snowy trail, blazing twin tracks toward a wintry vista atop one of his favorite peaks.

The Blue Ridge Parkway and the trails that branch off it rank among Thompson’s favorite ski destinations. The scenic road’s close proximity to town and multiple local access points enable him to catch prime skiing conditions when he gets off work.

“If we get an inch or two in town, then that's usually enough snow to head up to the Parkway,” Thompson reveals. “Because of the elevation difference, a small snow in Asheville usually translates into a bigger snow event along the Parkway. It's definitely the most convenient, it's a lot of fun, and it's just a great area for those who are first learning the sport.” It doesn’t hurt, either, that various stretches are often closed to vehicles during the winter.

For Thompson, however, cross-country skiing is more than just a way to get exercise in winter. Besides elevating his heart rate and exhausting his legs, it gives him a renewed appreciation of natural beauty.

“Once you get the technique of kicking and gliding down, skiing turns into just a very graceful sport that allows you to experience nature in all its winter perfection,” says Thompson. “The woods and mountains are a quiet, peaceful place in winter, and being able to get out there and experience that in person is just truly amazing.”

View all posts by Eric Crews →