Climbers converged on the Rumbling Bald area of Chimney Rock State Park for Rumble 2015 this weekend, for the 2nd annual Rumbling Bald bouldering competition. The Dec. 12 competition, organized by the Carolina Climbers Coalition, attracted about 80 climbers who sought to test their skills on a variety of bouldering “problems.”

Bouldering is a form of rock climbing that strips the sport down to its essentials, foregoing the ropes and harnesses often associated with climbing and allowing the climber to focus on technical routes that are typically less than 20 feet high. “Problems” are essentially routes that a climber must navigate (typically by moving up or across a boulder or rock face). While bouldering equipment is minimal, climbers often use climbing shoes and chalk bags to maximize their grip as they traverse rock faces. In addition, pads are often placed around higher or more technical sections of problems to minimize the risk of injury. Spotters can also be utilized to aid in directing climbers in a safe direction should they fall.

The competition utilized a number of problems found in the East and West Side Boulderfields at Rumbling Bald. Climbers were given a guidebook that directed them to the various problems and provided information regarding the problems’ difficulty and the number of points available for completing the problem. Climbers were given the opportunity to practice routes and test various approaches to problems throughout the day.

The competition format was loose: Competitors could select from a number of problems that were rated on the “V” (or Hueco) scale. The current V scale rates problems along a gradient, from easy at V0 to hardest at V16 using whole numbers. The highest-rated problem in the competition was listed at a V13. Competition rules, included in the guidebook, noted the ratings were relatively subjective, and “one person’s V1 is another one’s V6.” Nevertheless, the scale provided climbers some degree of consistency when deciding which problems to select that aligned with their abilities. Each problem was also given a point value that would be earned upon completion of the problem. To complete a problem, the climb had to be confirmed by judges and witnesses who then validated the competitor’s score sheet, verifying that the problem had been solved within competition rules. Scoring was divided among several categories for age and ability level. High scores could be earned by completing a large quantity of problems or by completing a select handful of high-value problems. Competitors were given six hours to earn points with no limit to the number of times they could attempt to solve a particular problem.

The atmosphere at the event was more cooperative than competitive, as climbers often gathered in groups around particular problems, cheering one another on or providing pointers regarding possible holds that the climber might not be able to see from their vantage. On the uncharacteristically mild December day, climbers appeared to struggle with keeping their hands dry and with utilizing holds that had already become grimy from previous attempts.

The Carolina Climbers Coalition is a 501(c)3 nonprofit established in 1995 with the purposes of preserving the natural environment, promoting safe climbing practices and preserving climber’s access to climbing areas in North and South Carolina. In 2010, the coalition worked with The Access Fund to purchase the West Side Boulderfield from a private developer and to conserve the 6.12 acre tract on which it is located for climbing. The area is now part of Chimney Rock State Park. The collective bouldering area at Rumbling Bald features some 1,500 problems and is well-known in the South as a popular winter climbing spot. 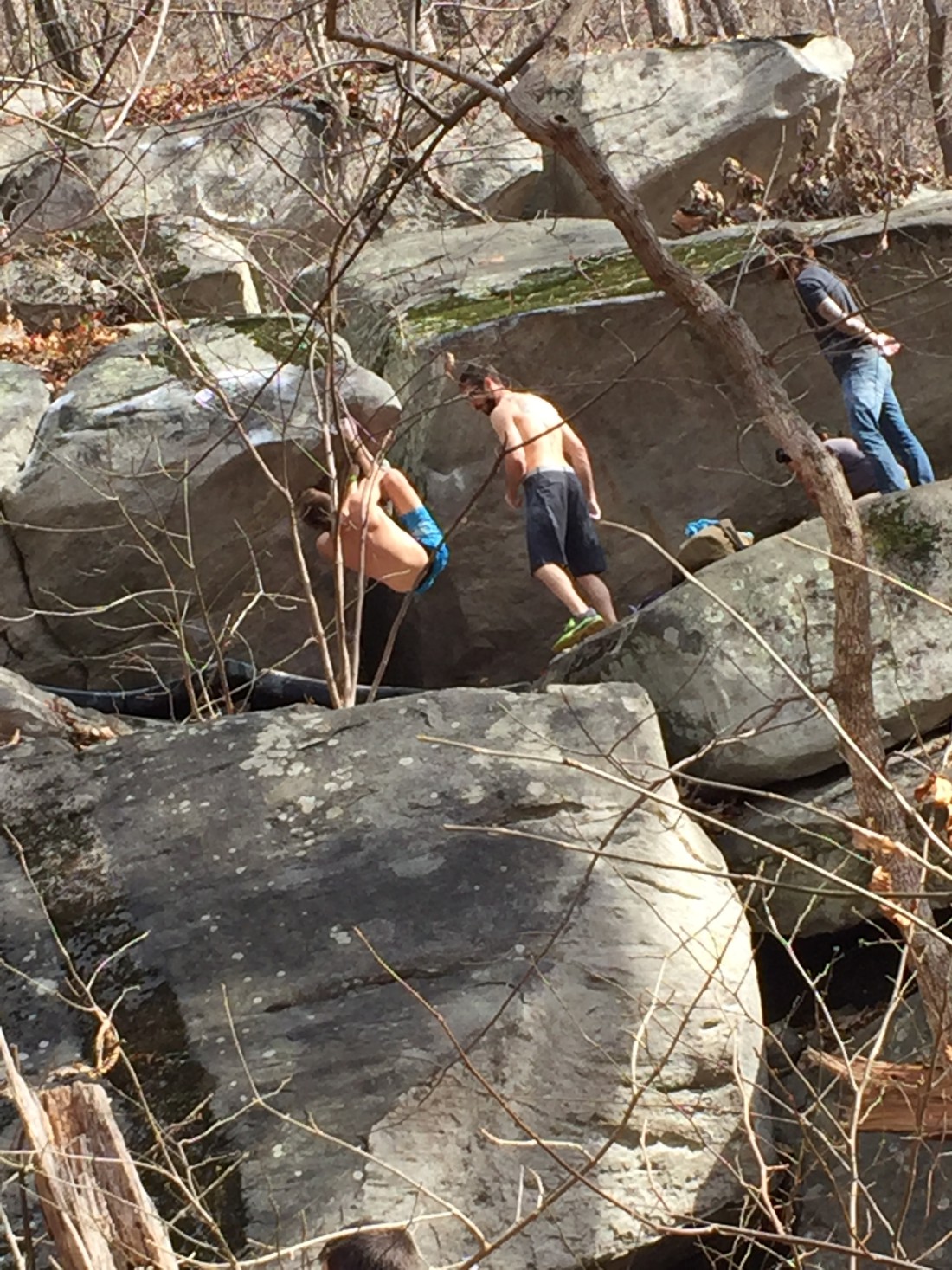 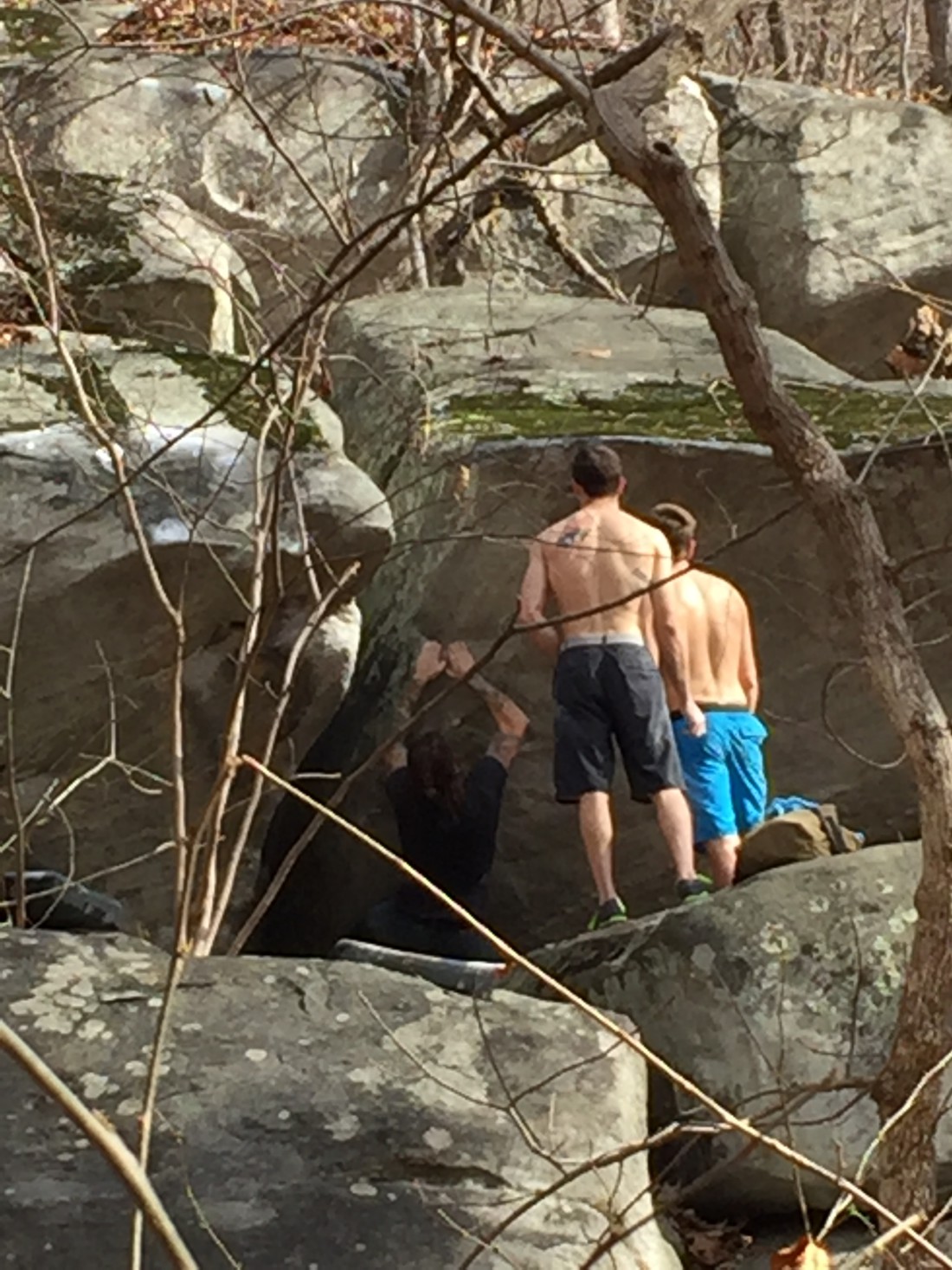 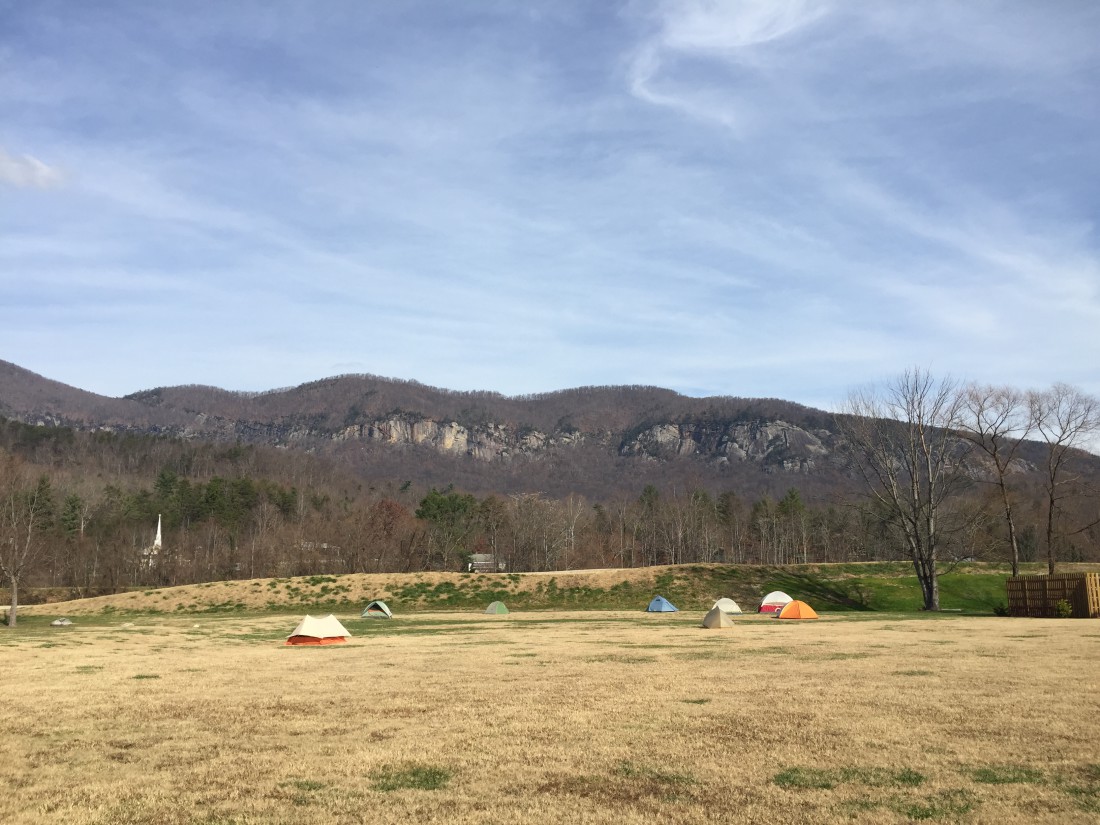 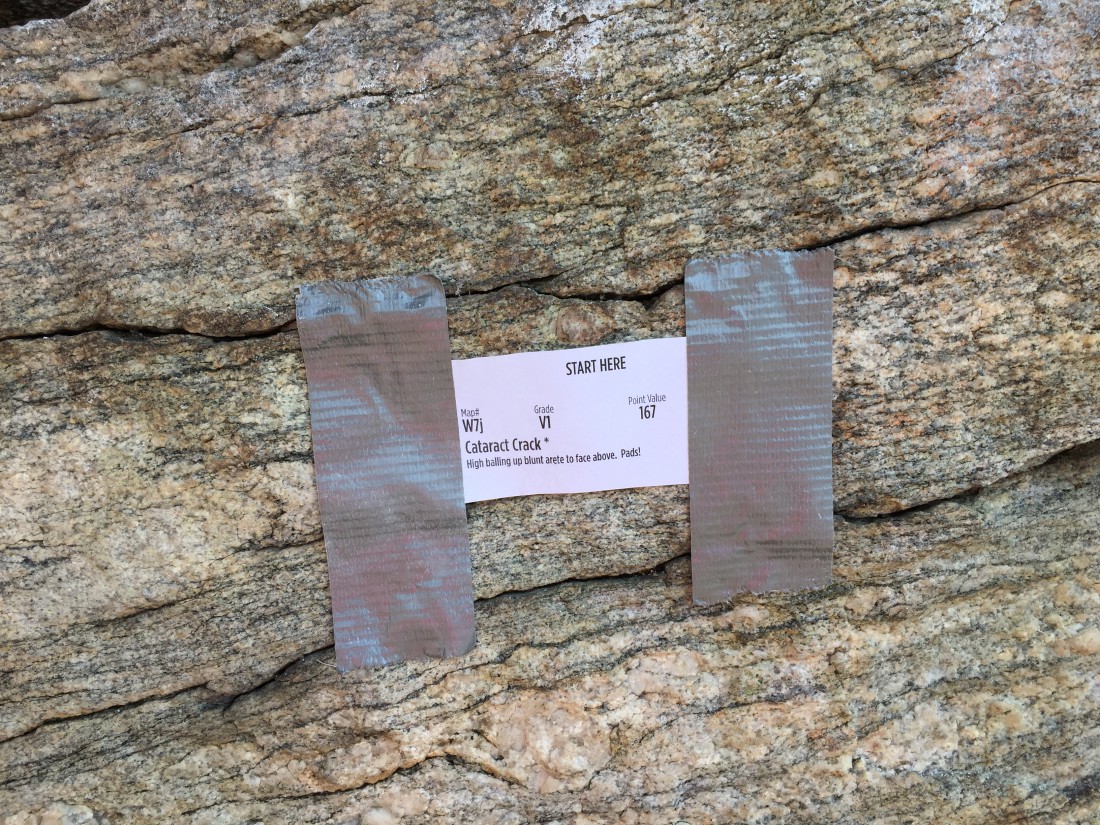 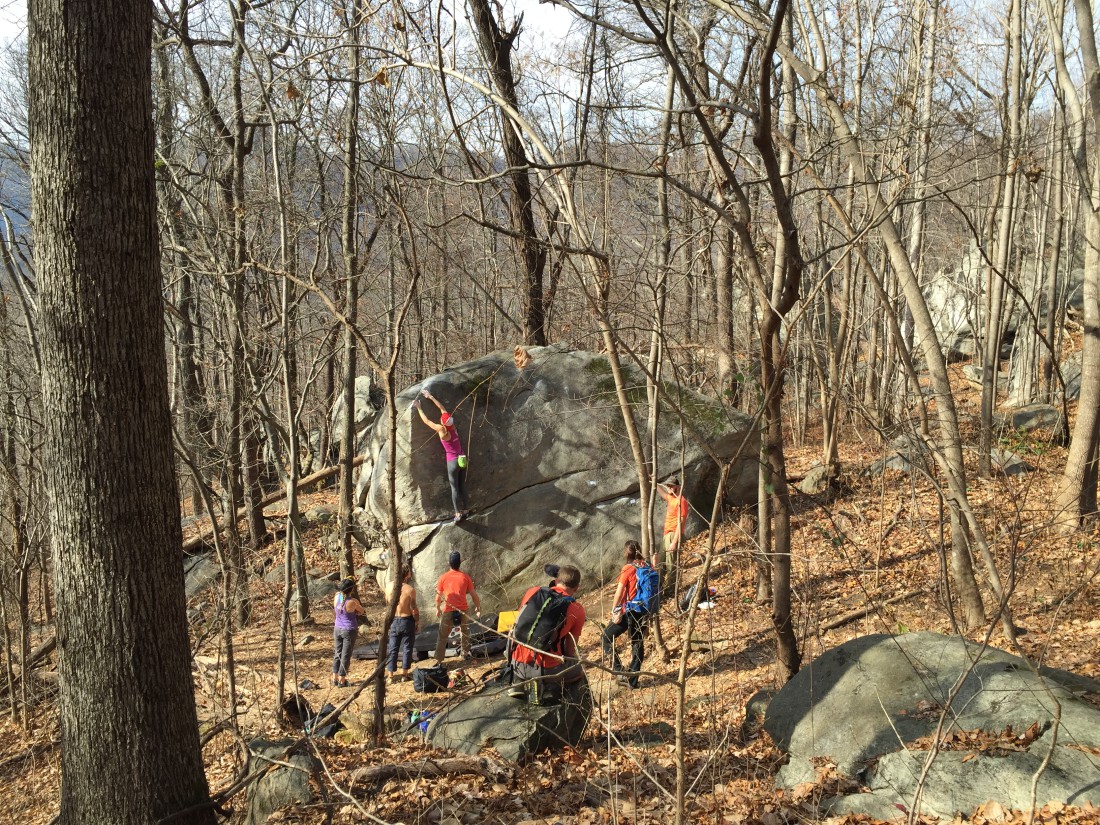 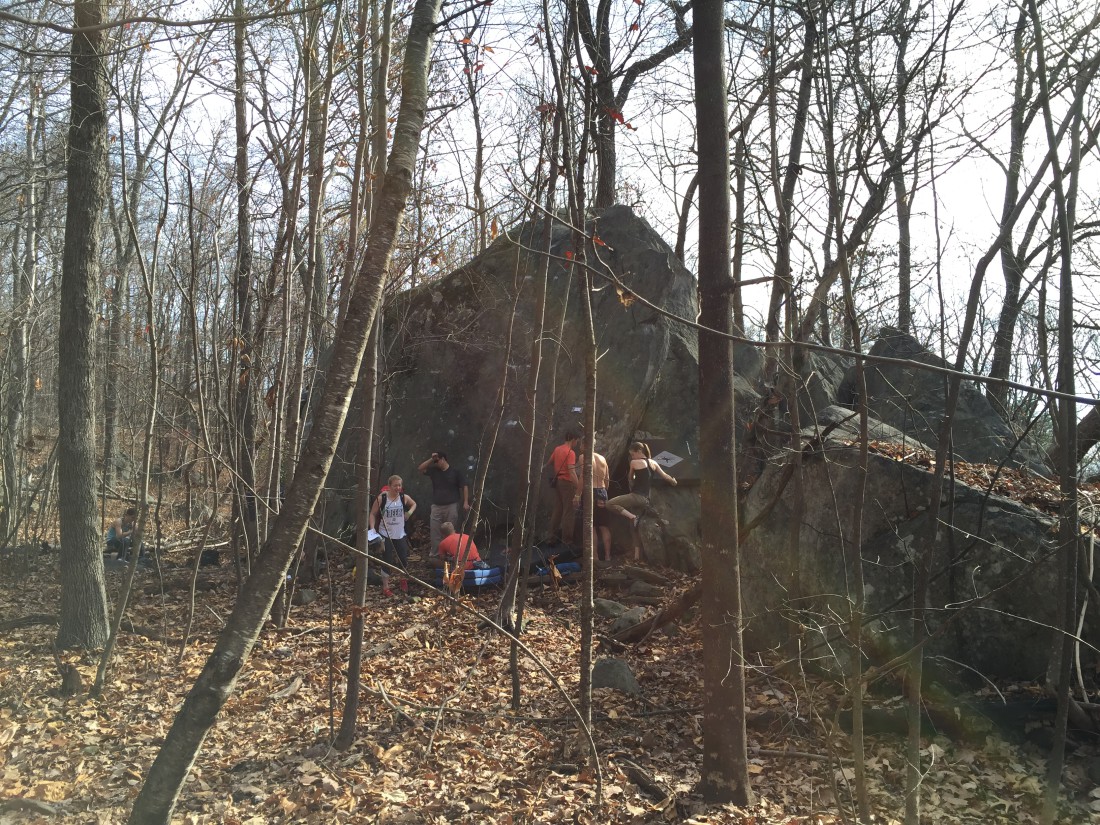 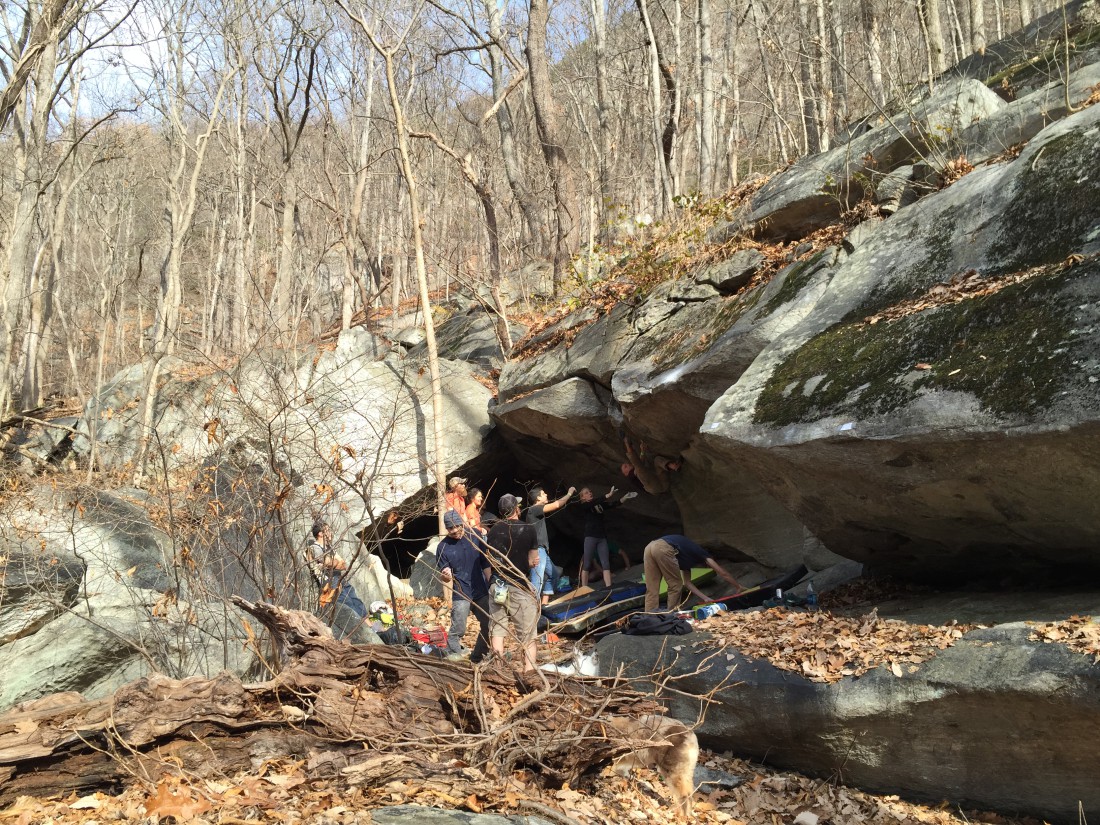 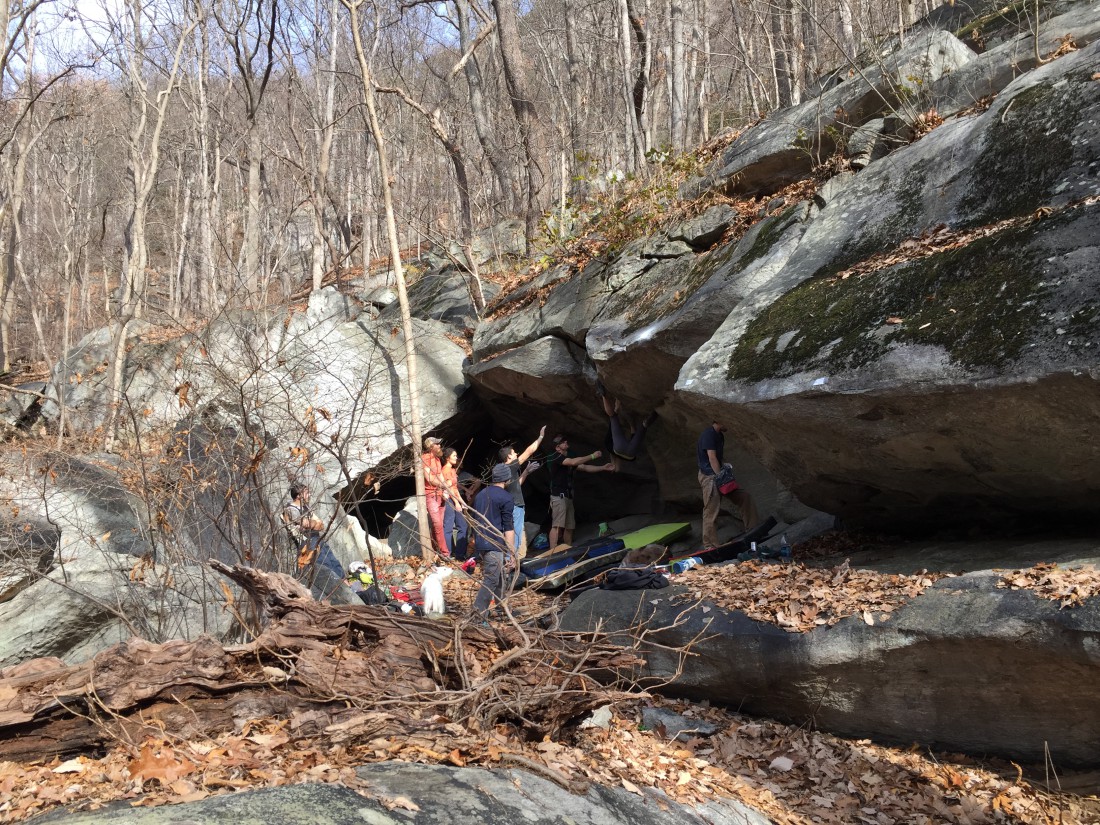 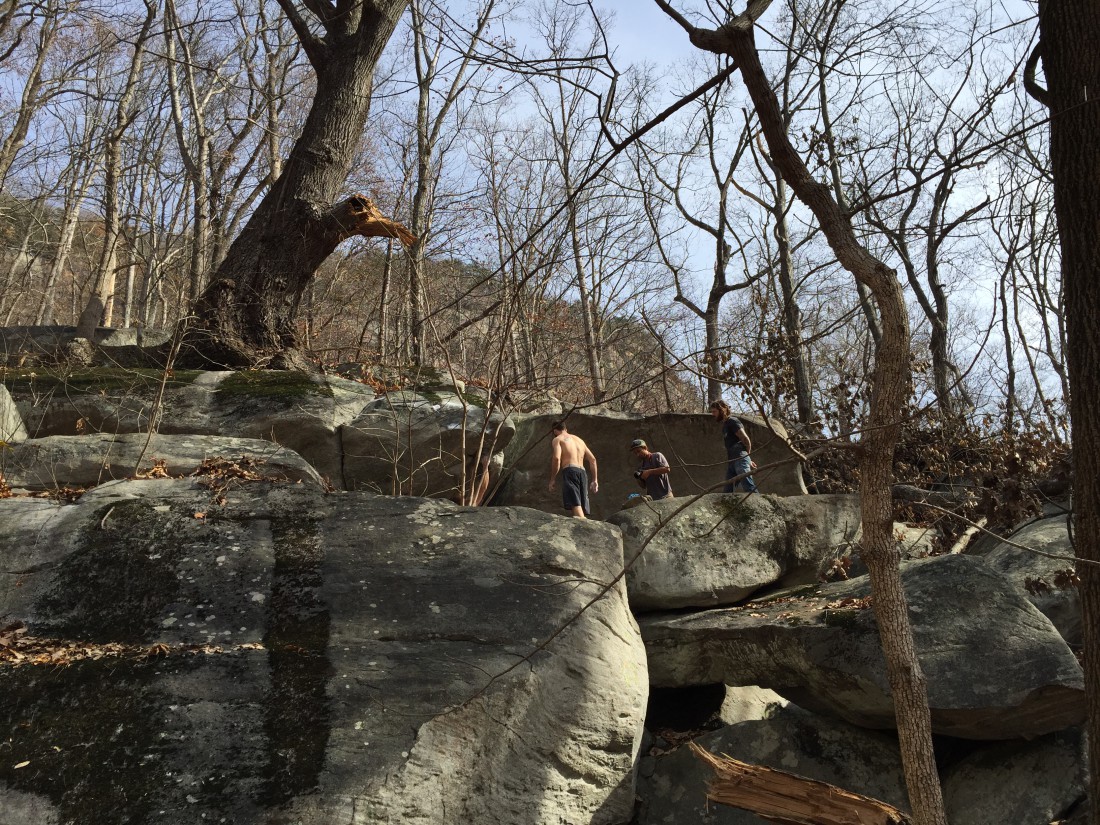 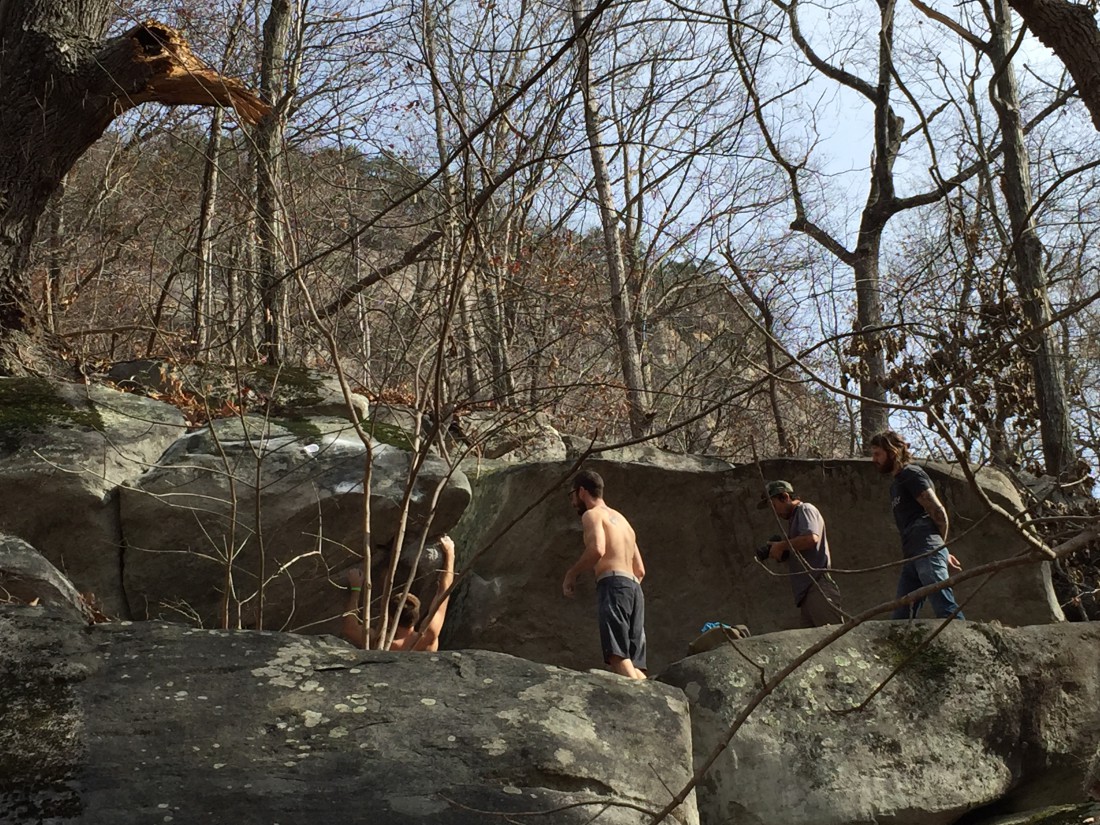 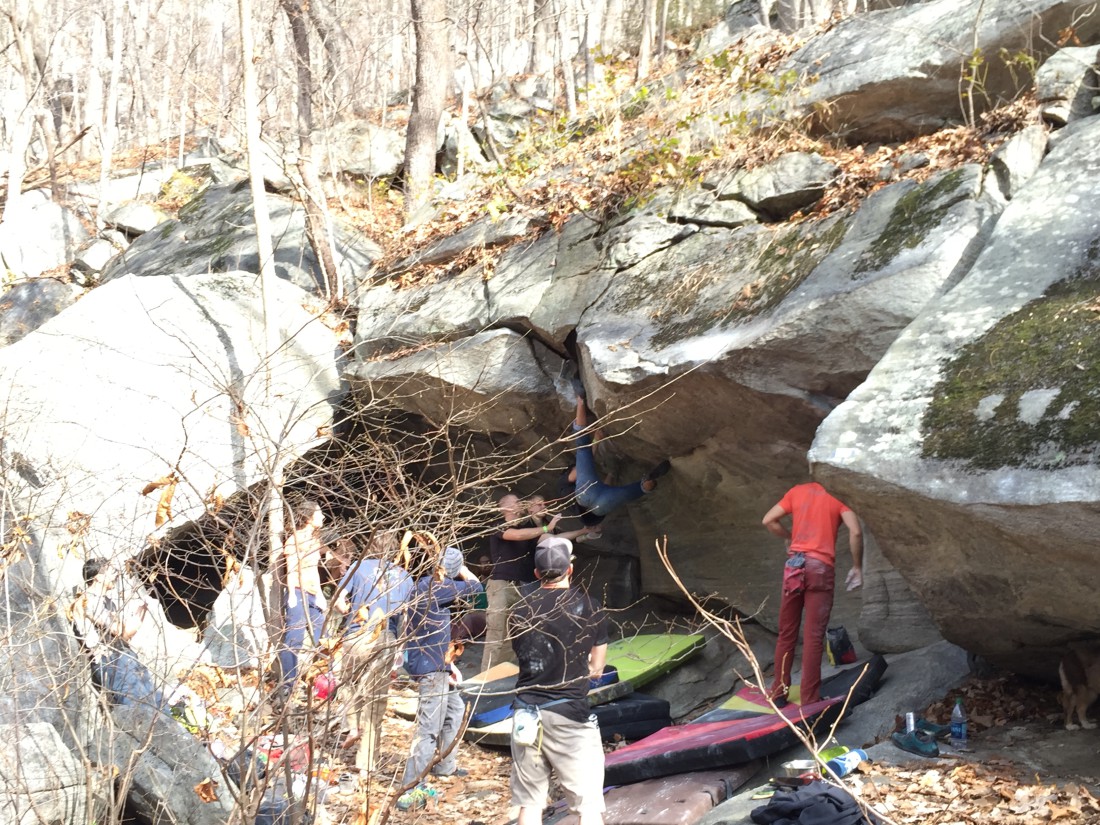 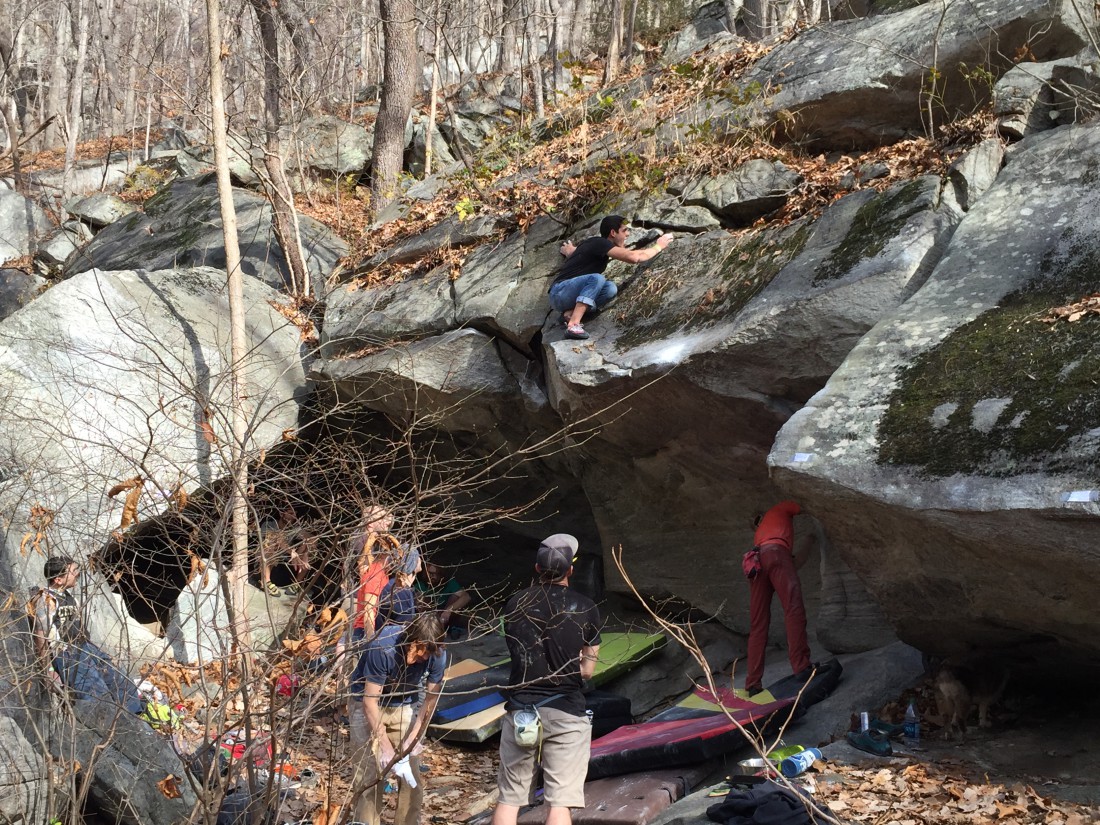 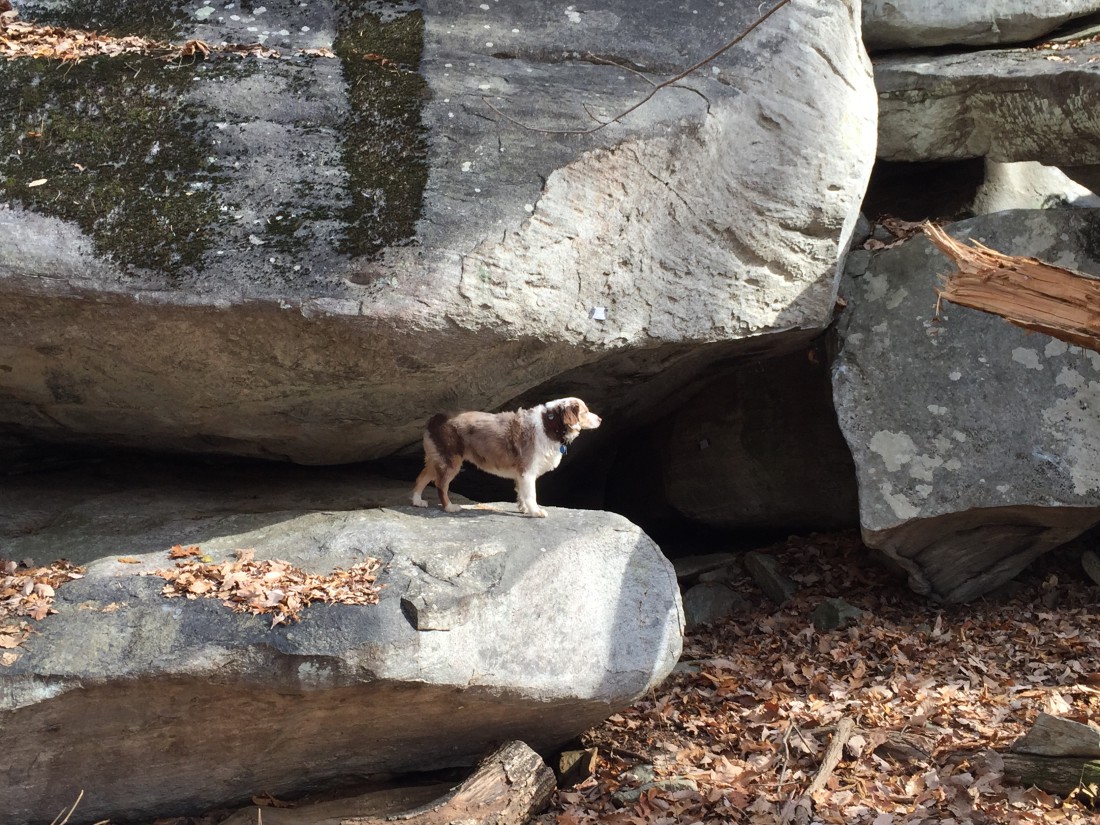 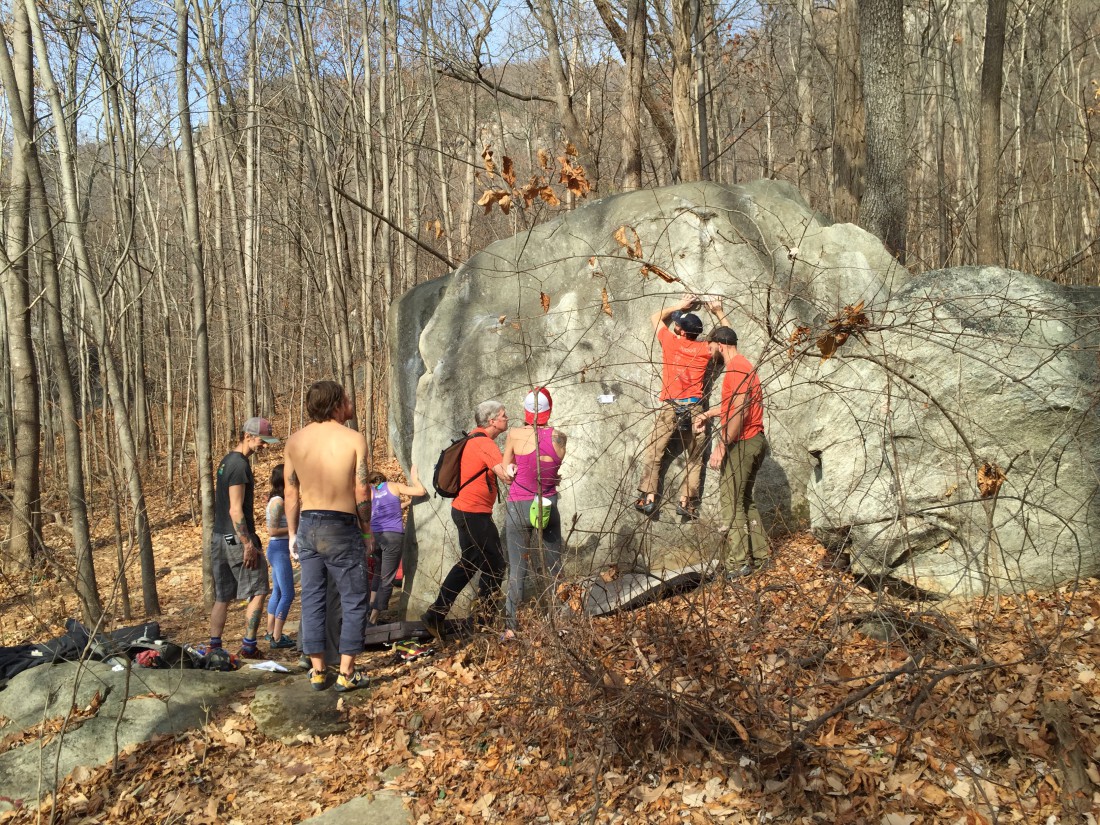 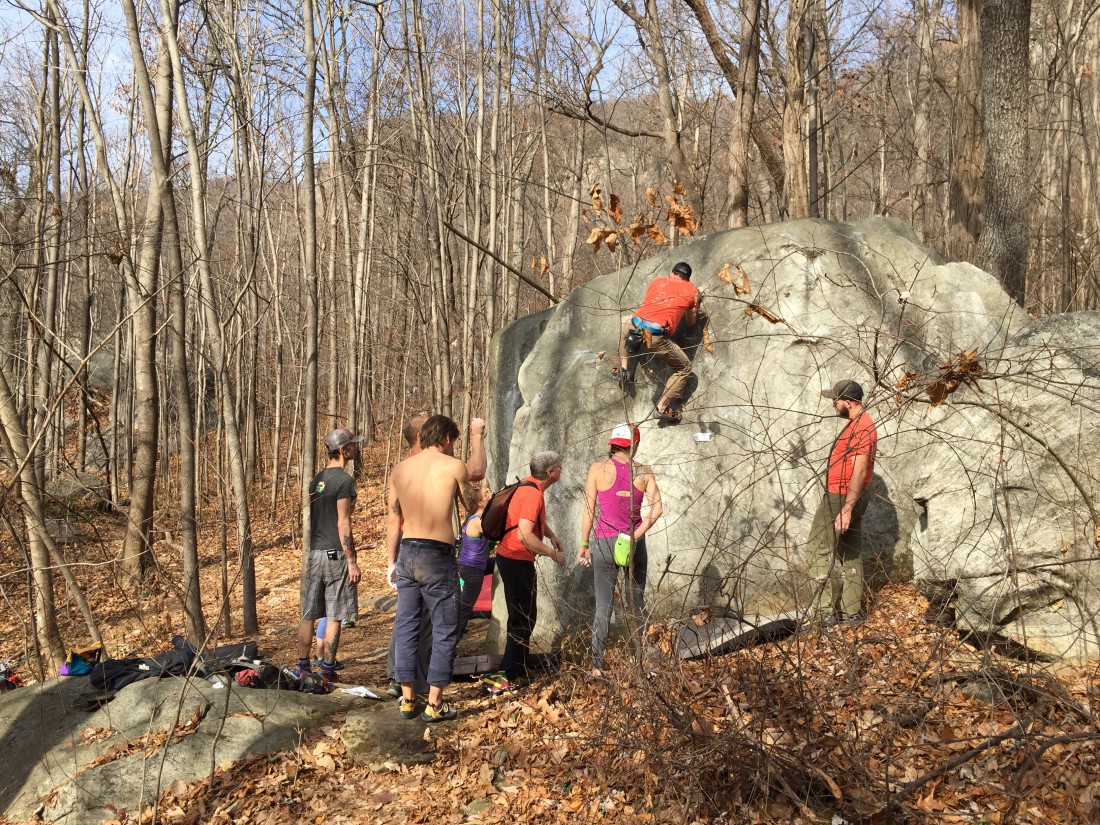 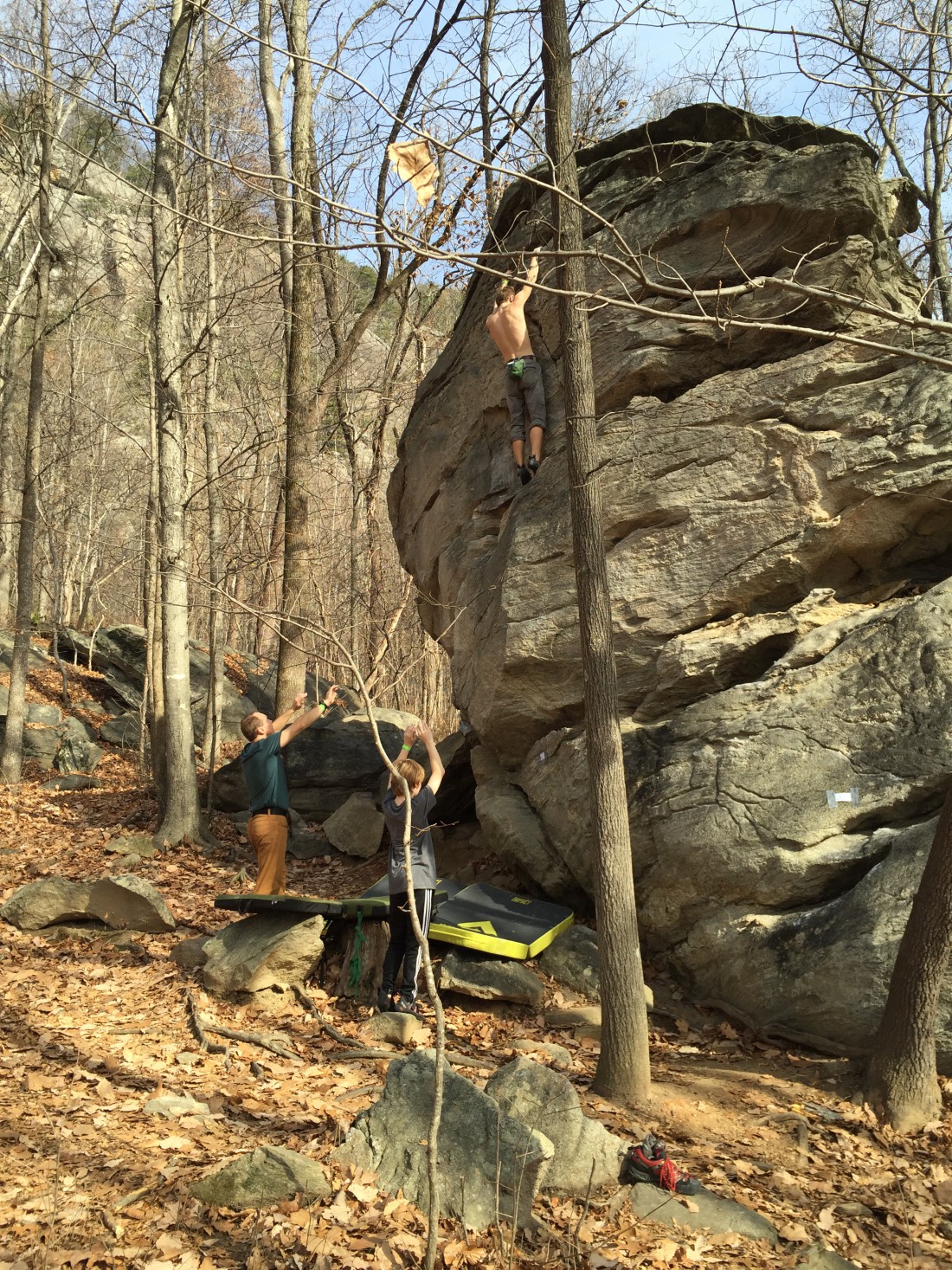