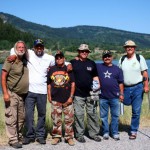 Soul searchers: Six veterans, including two from Asheville, journeyed to Wyoming for a fly-fishing trip aimed at soothing their souls. To qualify for the trip, the vets must have PTSD “in their jackets” — a diagnosis of Post Traumatic Stress Syndrome. photos by Jerry Nelson 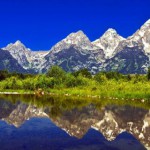 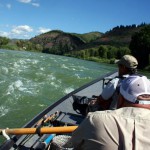 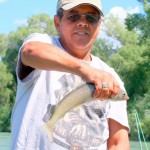 The night sky was black velvet, stars scattered like diamond chips. I could sense the bear more than see it: Quicker than anything else its size, it was in the tent with me. Grabbing my arm in its mouth, it jerked me around like a child holding a rag doll: violently, rapidly, up and down.

The shaking didn't stop … till I woke up and found the flight attendant tugging on my sleeve, saying, "Please return your seat to its upright position: We're about to land in Jackson Hole."

Since the program began four years ago, Rivers of Recovery has brought about 150 veterans of the wars in Vietnam, Afghanistan and Iraq to Wyoming’s Snake River for several days of fly fishing. The purpose? Giving vets who’ve been diagnosed with post-traumatic stress disorder an opportunity to de-stress in a safe environment.

For returning veterans, readjusting to everyday life can prove as challenging as any wartime mission abroad.

"Veterans coming home from war have a difficult time: Their experience in war has been a very galvanizing event for them that has changed the way they see the world and interact in it," says John Cowart, a social worker at the Asheville VA Medical Center. “Even in their own families they don't fit; they have trouble at work. Finding a safe place where they can not only be accepted but valued and honored is something that vets deserve."

In a typical week, Cowart sees about 75 local veterans dealing with post-traumatic stress disorder. "It constricts your ability to live life,” he explains. “You become socially withdrawn; the avoidance symptoms are what keep all the other symptoms up. It keeps people stuck from being able to really recover. … You disengage in life.”

PTSD occurs in about 30 percent of Vietnam veterans, 10 percent of Gulf War veterans and up to 20 percent of Iraq and Afghanistan vets, according to statistics from the Department of Veterans Affairs. The National Institute of Mental Health lists three categories of symptoms: re-experiencing (flashbacks or reliving a traumatic event), hyperarousal (a constant feeling of alertness) and avoidance (evading anything that could trigger a painful memory).

For veterans, a critical stage in the healing process is realizing they’re not alone, notes Cowart. That, he says, is when he sees feelings of isolation fall away in the group-therapy sessions he leads at the hospital. "They come into group and find out that they're not so unique. They realize, ‘Other people are telling my story: They're sharing what's happening, and it's exactly like what I'm going through.’"

But getting to that point can take time. And due to the stigma that still exists concerning mental illness, it’s often a wife, husband or other family member who steps up and says their veteran needs help.

"We've been struggling to help men come home from war ever since wars existed," Cowart observes. "For the most part, men that have fought wars come home and they fade into the fabric of their community and are not heard from. And that's pretty sad, to end up being very bitter and very lonely. We don't want that to happen."

In addition to group therapy, Cowart works individually with vets and tries to educate both them and their families about PTSD. But "The true litmus test,” he notes, “is not how they do here for an hour, but how they're doing out there."

To challenge them, Cowart leads a yearly trip to the Vietnam Veterans Memorial in Washington, D.C. Sometimes it takes years before a vet is prepared to go, but it's a big step toward healing. "They start to think, 'If I can do this, maybe there are other things I can do.'"

"You can't engage in any of these activities without being faithful to the moment, without being present, and without being in the here and now. That power of now is where we're able to find some peace."

Private donations pay for the trip; the only cost to participants is a few days of their time. To qualify, veterans must have been honorably discharged, diagnosed with PTSD and successfully complete a thorough physical.

Since I met the first two criteria and knew I could pass the third, I contacted Rivers of Recovery, the nonprofit that organizes the trips. I was hoping to go along wearing two hats.

Diagnosed with PTSD in the mid-’80s, long before the affliction became well-known, I still have occasional nightmares. I still jump when I hear sudden, unexpected, loud noises, and I still sit with my back to the wall when I go out to eat. And for a variety of reasons, I still sleep on a mattress on the floor. Lying in a regular bed keeps me so far from what feels safe that I end up just staying awake most of the night.

I would also be wearing my photographer’s hat, trying to capture these men as they stepped out of their lives and into a new experience.

The first night, we just relaxed around the fire at the fishing camp a bit upstream from the Palisades Reservoir, which straddles the Wyoming/Idaho state line. After dinner it was just six old veterans doing what veterans do: sitting around talking, gently probing and trying to figure out whether these other people could be trusted. By the trip’s end, however, I not only knew I could trust these men but came away with the unshakable conviction that they would live in the backcountry of my soul for years to come.

Early the next morning, we were shuttled about 10 miles to the landing, below the Palisades Dam. There we paired off, two vets to a boat, plus an experienced fishing guide who would show us the best nooks and crannies to catch rainbows, cutthroats and browns.

Drifting with the current and alternating riverbanks, we spent our morning casting, watching the strike indicator, reeling in the wet fly and recasting. Never having fly-fished before, I found it a challenge to switch from a standard rod and reel to a 9-foot pole and a spool used only to hold the fishing line — not reel it in and out. But after a few minutes, I was reliably putting the wet fly within a 2-foot circle of where I wanted it to go. Settling into an easy rhythm, I could soak up the scenery around me. And as the boat drifted downstream, my mind drifted back to other rivers in other times and places, where the “excitement” had nothing to do with catching fish.

I also thought about my buddy Rick in the bow of the boat. He was a Marine in Vietnam, but not just a run-of-the-mill, infantry-type Marine. Rick was Recon, that special breed of Marine who would leave the safety of the firebase late at night and venture several hundred feet into the jungle to probe for the enemy.

I've known Rick almost since I arrived in Asheville — he was one of the first people I met when I moved here. As the bonds of our friendship grew, strengthened and deepened, we slowly opened up to each other, sharing hopes, dreams and, yes, fears. Things that people who pass us on the street would have no idea existed in our souls — and would be horrified by if they did know.

As Rick fell into the same rhythm — cast, wait, take in the line — I could see the tension and stress melt off his face like snow melting off the Tetons that lay just beyond the river. As if following the water’s prescription, the current of our conversation swirled, grew animated and quieted down again, only to repeat the pattern.

After eight hours on the water we were back at the boat ramp. Time to tally our catch, load the boat on the trailer and head back to camp. Our camp host, Ken, a Vietnam vet himself,  was in charge of the cooking. While he fixed a great dinner of burgers, steaks and salmon, the six of us lit a fire and settled in with coffee.

The conversation Rick and I had begun on the river now expanded to include the other four vets. Amid the growing darkness, the conversation drifted from the calm waters of our home lives, family and friends to the turbulent white water of our time in the service. As one guy spoke about a lost friend, the river of tears flowed. The rest of us nodded in silence, empathizing with his loss as we were reminded yet again that there’s no shame when a warrior weeps. In the ensuing quiet, we silently wrapped our hearts around the vet, letting him know that while we didn’t know his friend, we understood and would gladly “Honor This Man.”

Watching the surrounding faces lit by the campfire, we each knew that all of us were brothers, our common ancestors not fathers and mothers but experiences, hopes and fears.

One by one, we gradually made our way to our tents. I crawled into my sleeping bag, watching the dying embers till I fell asleep and dreamed again. This time, though, it wasn’t about a grizzly invading my space but rather rainbows, cutthroats, browns, five new friends — and a lady waiting for me when I got back to Asheville.

One thought on “Thy rod and thy staff”