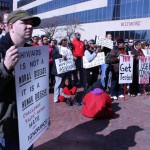 Know your status: Local residents and activists marched Nov. 5 in the annual AIDS Awareness Walk, urging people to get educated about the disease. photo by Megan Dombroski 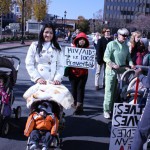 In the 30 years since AIDS was first reported in the United States, great strides have been made in the prevention, diagnosis and treatment of the disease — but it's still here. With that in mind, on Nov. 5, the Western North Carolina AIDS Project held its annual Awareness Walk in downtown Asheville. Volunteers, local residents and activists marched down Patton Avenue with signs such as “know your status” and “get tested.”

A speaker at the event, WNCAP educator Michael Harney known as "Rubber Man,” made the case that people still need to protect themselves and get treated if they catch HIV, the infection that causes AIDS.

“Everybody knows I talk about condoms,” said Harney, after the marchers gathered to display their signs. Responsible for many of the bowls of free condoms set out at more than 35 bars, restaurants and other Asheville-area locations, Harney has spent the last few decades advocating for open, honest communication surrounding HIV and other sexually transmitted diseases. Last year, he helped distribute 164,000 condoms. "When condoms are used correctly [and] consistently, they reduce HIV infections, STD infections and, potentially, some hepatitis infections," said Harney.

Back in the 1980s and ‘90s, AIDS “was pretty much a death sentence,” says Chris Winebrenner, community resource coordinator at WNCAP. But with better treatment programs and access to care, there’s hope these days, he says.

Winebrenner suggests that if an individual tests positive for HIV, the first thing to do are seek care, consult a specialist and get into a treatment program.

For more information about care options, physicians and such programs as WNCAP’s support groups, visit the nonprofit’s website at wncap.org or call 800-346-3731 or 252-7489.

But HIV isn't the only problem, he noted. “In North Carolina, we have over 45,000 people younger than 24 with chlamydia. … We need to start now with comprehensive sex education and show people how to use a condom.”

That education starts with adjusting the language, Harney argued: "We must talk in an age-appropriate way to our children [and] help them understand their anatomy so we don’t call the parts of our body ‘coo-coo,’ and a ‘ding-dong,’ ‘wing-wong’ and a ‘bing-bong.’"

Asheville Mayor Terry Bellamy also spoke, mentioning that 100,000 people in WNC have been diagnosed with HIV, and 20 to 25 percent of them don’t even know it. “HIV-AIDS doesn’t look at your race. It doesn’t look at your checkbook. It doesn’t look at if you graduate from high school,” Bellamy said. Educating people about the disease means educating everyone, she insisted, saying, "It is important for everyone in our community to know their status and be safe.”

In a separate interview, Chris Winebrenner, community resource coordinator at WNCAP, explained that the annual AIDS Awareness Walk attempts to remind people that the pandemic persists in our community. “The CDC reports that over 56,000 are newly infected each year in this country, [with] a disproportionate number of infections in the South,” he said. “A lot of the infection rate is a result of the stigma that prevents people from getting tested and prevents people from accessing care if they do have a positive result.”

WHAT: The AIDS Memorial Quilt: A Tapestry of Lives

WHY: The quilt honors the 26 million lives lost, worldwide, to the disease and the 33 million people living with it.

This year, 48 local community partners supported the annual walk, including such groups as Blue Ridge Pride, Homeward Bound, Our VOICE, Planned Parenthood and the YWCA, he mentioned.

“Part of the walk is getting different stake holders in the community together and walking and recognizing that AIDS is still a problem,” Winebrenner said.

Local students got involved too. UNCA student Ed Heidel majors in health and wellness; his senior project focuses on getting his peers involved with the walk. “I just wanted to have UNCA represented at the event and in our community,” he said. “My hopes have been to improve awareness of a still-powerful disease. … By increasing the number of young people in attendance at the event, generations can come together and all walks of life can see that HIV affects us all.”

Besides the sense of community the walk fostered, Heidel said the AIDS awareness walk "was successful because it brings out people from all walks of life … [AIDS] is an equal opportunity offender and the amazing thing is that it is completely preventable.”

— Megan Dombroski is a senior journalism student at UNCA and an editor at The Blue Banner, the student newspaper.

One thought on “Know your status”