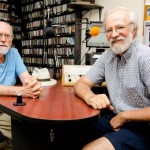 Back on the air: Peter Loewer, Patrik Battle and Alison Arnold (not pictured) revive “Back to the Garden” on MAIN-FM, which aired on WCQS for several years. photo by Max Cooper 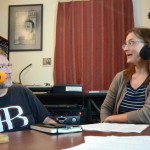 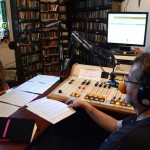 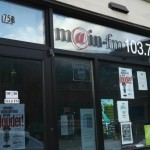 On MAIN-FM, Peter Loewer (left), Patryk Battle (right) and Alison Arnold (not pictured) revive “Back to the Garden,” which aired for several years on WCQS. (Photo by Max Cooper)

After nearly two years, the switchboard lights are glowing once again inside MAIN-FM’s studio on Haywood Street. And that’s good news for Western North Carolina, says Wally Bowen, who founded both the community radio station and the nonprofit Mountain Area Information Network, which operates the station.

“At a time when commercial media, particularly radio and TV, are pretty much totally controlled by absentee corporations, there’s just virtually no opportunities for local voices to be heard,” Bowen maintains. “There’s definitely a hunger out there for local radio.”

It’s been a rocky road for MAIN-FM. When it was launched about 10 years ago, Federal Communications Commission regulations limited the signal strength to 1 watt. That meant the broadcasts could be heard only in parts of west and south Asheville, Oakley and certain spots in Kenilworth.

And beginning in the fall of 2011, problems with its Busbee Mountain tower forced the station to shift most of its programming to the Internet and maintain only the minimum amount of broadcasts needed to keep its license. As a result, people tuning into 103.5 FM found little more than dead air.

In January, however, the FCC changed its restrictions on low power FM stations, and the following month, MAIN-FM obtained a new broadcast frequency. After some equipment upgrades, the station came back on air in June. It can now be heard at 103.7 FM within a 10-mile radius of downtown Asheville, in places as far away as Fletcher, Candler and Weaverville. That expanded reach, notes Bowen, means it can be “a powerful new outlet for local voices.” Bowen’s not alone in his passion for community radio. Asheville FM is in the process of obtaining a low power FM broadcast license to augment its Internet presence. Co-manager Kim Roney says the station’s nearly 60 volunteers are what keeps it going.

Other area residents are eager to jump on MAIN-FM’s bandwagon. “Back to the Garden,” a monthly radio call-in show that ran on WCQS several years ago, can now be heard on MAIN-FM on the first Wednesday of the month at 7 p.m.

Besides providing a chance to resurrect the show, being part of MAIN-FM offers new opportunities, notes co-host Patryk Battle. “I really want there to be a truly independent voice for the people of Western North Carolina,” he says. “I want as many diverse voices as possible: I want dialogue.”

For too long, West asserts, geographic isolation and financial barriers have meant that some WNC residents were left out of important community conversations. Not everyone has high-speed Internet, he points out, but “You can go to Goodwill and get a working FM radio for a dollar. So that means it’s accessible to anybody, anywhere, anytime,” says West, who chairs UNCA’s Mass Communication Department. And that, he maintains, makes radio the most democratic medium of all. “The on-air signal is a crucial aspect of the effort to reach everybody.”

Bowen agrees, saying, “People are drawn to websites all around the world, but community radio still has the power to bring a local audience together to hear local voices.”

“Back in the 1930s and ’40s, people would say, ‘Shh! Our show’s coming on; we want to hear!’” And even today, she asserts, “People are listening intently to these evocative voices. People want you to weave a narrative for them and inform them at the same time. I’m very interested in narrative storytelling on the medium of radio: I think there’s almost something primal about it that we’re missing today.” The little station that could

But before MAIN-FM could start using its new frequency, notes Bowen, the station had to make some key investments. All told, it cost about $10,500 to hire broadcast engineers and an FCC attorney, buy a new transmitter, replace a production room mixer, invest in an antenna upgrade, pay staff and cover installation fees.

“In the world of media reform, change takes time and patience,” he observes.

Revenue generated by MAIN, a nonprofit Internet service provider, cover most of the station’s roughly $50,000 annual operating budget, Bowen reports, with donations making up the rest. Under FCC rules, low power FM radio stations like MAIN-FM broadcast only noncommercial, educational programming and operate at less than 100 watts. In addition to its local programming, the station is the only one in the region that broadcasts “Democracy Now!” and “The Thom Hartmann Program” live, he points out.

But technical issues aren’t the only challenges the station has faced. Bowen, who has Lou Gehrig’s disease, stepped down as executive director July 1. “I’m still actively involved on the board and still obviously have a leadership role, but I just can’t provide the day-to-day management in the office, particularly what the Internet service requires.”

Nonetheless, he continues to have big dreams for the little station he founded in 2003. Right now, MAIN-FM is in the midst of its summer fundraising drive. Looking ahead, Bowen would like to explore using additional frequencies to expand the station’s reach, and perhaps resurrect URTV, Buncombe County’s defunct public access channel. But what drives his vision,  Bowen emphasizes, is the thing that makes community radio so powerful.

“It’s immediacy. Ultimately, most of our content will be live,” he reports.

And even if “Carolina Clean Air Acts” isn’t live, Furnish, who came up with the idea for the show, feels that unpredictability provides an element of surprise that keeps listeners hooked.

“I wanted to do something that was journalistic and investigative, but also along the lines of NPR’s ‘This American Life,’ where the stories are sometimes very quirky and where, at certain points, you don’t even know why this is a story and then there’s that connection that happens,” she explains. “But for our program, I want that connection, that trail, to always lead back to Asheville or Western North Carolina.”

Correction: In the print edition of this story, Patryk Battle’s name was misspelled and an incorrect listing of the schedule for “Back to the Garden” was printed. This online version of the story has been updated to reflect those changes.