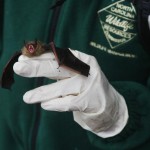 No rest for the weary: Cave bats like this tricolored bat are usually hibernating deep within the cave in March; but wildlife biologists suspect the deadly white-nose syndrome when they’re found roosting near the cave entrance, as this animal was late last month. photos by Jonathan Welch 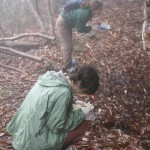 A grim search: NC Wildlife Commission biologists Corinne Diggins and Gabrielle Graeter look for bats under a rock ledge near Linville late last month. The agency’s bat surveys have turned up three cases of the disease in WNC since January, with more anticipated. 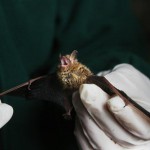 Witness to extinction? Biologists say that if currently observed mortality rates from white-nose syndrome continue, some bat species could disappear in less than 20 years. Bats play a major role in controlling insect pests, and in pollinating many agricultural crops.

The discovery of the deadly bat disease known as white-nose syndrome in more WNC counties doesn’t bode well for the future of many bat species here, according to biologists with state and federal wildlife agencies.

In late January, a team of biologists conducting a bat inventory of a cave at Grandfather Mountain discovered a single dead bat, which was found to have had white-nose syndrome.

Then, in February, N.C. Wildlife Resources Commission biologists conducting an inventory of a closed Yancey County mine found numerous bats displaying the characteristic white patches of fungus on their skin. Five bats were sent for testing, which confirmed the presence of the disease. And in March, another case was confirmed in McDowell County.

White-nose syndrome has killed more than a million bats since it was discovered in a New York cave in February 2006. To date, nine bat species in 17 states have been documented as carriers of the fungus, which has been given the alarming name Geomyces destructans. As yet, biologists don’t know if it causes the bat deaths or is a secondary factor in the syndrome.

The fungus thrives in the cold, humid conditions characteristic of the caves and mines where bats hibernate in winter. But the furry white patches found on the faces and wings of infected bats are only part of the syndrome: Affected bats awaken more often during hibernation, using up the stored fat reserves they need to survive. Thus, they wind up emerging from hibernation in midwinter and, since their usual insect prey is not available, typically freeze or starve to death.

Install bat boxes on your property. Stay out of caves and mines (although white-nose syndrome is believed to be transmitted primarily from bat to bat, there’s a strong possibility that humans might also carry the fungus from cave to cave on their clothing and gear). Don’t handle sick or dead bats; if you see one that you think might have white-nose syndrome, contact Gabrielle Graeter at the N.C. Wildlife Resources Commission (graeter@ncwildlife.org or 273-9097), or e-mail whitenose bats@fws.gov.
For more information about the disease, visit fws.gov/whitenosesyndrome.

The Wildlife Resources Commission is also looking for volunteers to adopt a driving route and survey bats using an acoustic detection device attached to their car, to contribute to a study of bat behavior and distribution in the mountains.
For more information, email corinne.diggins@ncwildlife.org.

On a cold, misty day late last month, Xpress accompanied Wildlife Resources Commission biologists on a visit to several caves near Linville Caverns to check on the bats there. Scrambling up a steep, forested boulder field, we arrived at a series of openings in a rock ledge dripping with moisture and lush, green moss.

Bats were roosting near the the first cave’s entrance rather than deeper inside, where they would normally be at this time of year, biologist Gabrielle Graeter explained. The roosting bats were carefully inspected for signs of disease. “Sometimes bats test positive for white nose even though you can’t see it,” she noted, examining the wings and body of a tricolored bat. “Being out here on a cold day is not normal.”

“Look on the ground,” instructed Graeter as the group searched for bats in distress. Then we spotted one outside the cave, flying toward the entrance. “This is exactly what we’re coming here to find,” she noted. “Our caves don’t have thousands of bats like the caves in the Northeast. You’d expect that there might be [only] 40 bats in there, and yet we are finding bats out here. It’s not a good sign.”

Mere days before, Linville-area bats had tested positive for the disease. “I would assume that all these caves are infected,” said Graeter. “We’d call this site suspect; we already have a site confirmed close by, with bats observed out flying around. … I’m convinced that a bat has it until proven otherwise.” One animal was taken back to the lab for testing.

With so little known about the disease, there’s no treatment as yet, and bat biologists say the epidemic has no end in sight. Mortality rates approaching 100 percent are reported at some sites, and the disease threatens some of the largest hibernation caves for endangered species such as the Indiana bat and the Virginia big-eared bat. Across North America, bats are at imminent risk, wildlife biologists warn.

Bats play a significant ecological role, both as plant pollinators and because they consume enormous quantities of insects. White-nose syndrome could also pose a problem for humans, biologists say, since populations of insect pests might rise if bat predation decreased. Although bats are long-lived given their size, females generally produce only one offspring per year, noted Diggins. Thus, years of bat-conservation efforts, not to mention recent strides in protecting endangered populations, are at risk, state wildlife biologists say.

A recent public forum at UNCA painted a grim picture of these winged mammals’ future. One forecast assumed 45 percent mortality per year — the average death rate observed for white-nose syndrome so far. By that reckoning, the little brown bat would be extinct in just 16 years. Numbers like these suggest that biologists may be tracking not just an epidemic but an outright extinction event.

2 thoughts on “Green Scene: Bats in the balance”