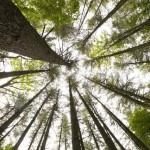 Let there be light: An upcoming prescribed burn in Bent Creek Experimental Forest will allow more sunlight to peep through the canopy, which could help the young oak trees now struggling to grow in shady conditions. Photos by Jonathan Welch 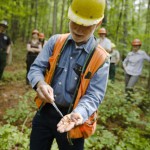 Can’t take the heat: Bent Creek research forester Henry McNab holds a handful of poplar seeds, scooped up from the leaf litter in one of the tracts set for an upcoming experimental burn. The low-intensity fire will kill most of these competitors, he says, and allow the baby oak trees now present a chance to grow tall. Photo by Jonathan Welch 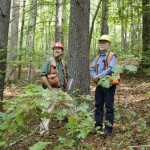 Test case: Forest Service technician Tracy Roof, left, and research forester Henry McNab, right, want to know whether a growing-season burn will do a better job than a more typical dormant season burn in helping the oak trees outgrow their competition while reducing fuel for wildfires. Photo by Jonathan Welch 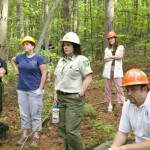 The case for burning green: Forest Service researchers and technicians want to know whether a growing-season burn will spark oak trees to outgrow their competition and reduce the fuel for wildfires.

For longer than many of us can remember, the U.S. Forest Service’s Smokey Bear campaign has featured the paternal bruin, in his ranger’s hat, delivering the emphatic warning: “Only YOU can prevent forest fires.”

Maybe so, but the Forest Service is also pitching in: Hundreds of millions of public dollars are spent annually in an attempt to suppress fire in the national forests. In recent years, however, ecologists and forest managers have come to recognize the important role fire plays in natural ecosystems — and the negative impacts of excluding it from the landscape.

Fire affects virtually all forests, ecologists say, and prescribed burns are one of many tools land managers use to achieve desired conditions in managed forests. Yet the long-term effects have not been well studied in the Appalachian Mountains’ moist growing conditions — particularly during the growing season — notes Forest Ecologist Katie Greenberg.

Established in 1925, Bent Creek is the oldest research forest in the South. Here, scientists can examine the long-term effects of various forest-management practices and develop specific methods for sustainably managing upland hardwood forests. “This study focuses on [burning in] the growing season versus dormant season. We’re comparing three growing-season burns to three dormant-season burns, along with three areas with no fire.”

A key goal is encouraging oak trees, which are valuable for timber and acorns (a staple food for wildlife). In many areas, oaks are aging but not replacing themselves as well as might be desired, scientists say, especially on moist growing sites where competition is greater.

The one-day prescribed burn is part of a longer-term study at Bent Creek, one of numerous research forests the agency operates in the South. The study will help scientists understand how the timing of prescribed burning affects hardwood regeneration as well as herbaceous vegetation, fuel loads and breeding-bird communities.

The targeted areas include forest stands near the Lake Powhatan Recreation Area, adjacent to Forest Service roads 479 and 664. But while short-term impacts are inevitable, “It’s amazing the resilience of the forest, especially if we get rain after [the fire],” notes Research Forester Tara Keyser. “Things will start sprouting immediately.”

No specific date has been set: The burn will take place when weather and other environmental conditions permit, in keeping with an agency checklist. Wind and humidity are key factors in fire behavior, safety and smoke control.

Ensuring the safety of firefighters and the general public is the No. 1 priority in timing and carrying out burns, officials say. Several adjacent roads and trails will be closed that day and maybe longer, if hot spots persist. The agency asks the public to heed signs posted on roads and at trailheads and to stay away from burn sites, closed roads and trails.

Required to meet state air-quality requirements, the Forest Service will take steps to reduce the smoke impacts. Pisgah National Forest technicians led by Patrick Scott have prepped the area by making a fuel break — a boundary created by removing vegetation so the fire won’t spread — and his team is looking for “weather windows” providing the optimum moisture, temperature and wind conditions. “It’s a day-to-day monitoring effort,” he reports, adding, “We want a wind direction that takes the smoke away. … The goal is for heavy smoke to rise up, hit the transport winds and move out.” The operation, says Scott, should be completed in a single day.

The primary motivation, Keyser explains, is that oaks don’t grow well in shade: “They need some sunlight. So one of the things that burning is thought to do is burn off some of that mid-story competition. A lot of fire studies have shown that it’s easier to kill some of those mid-story trees when they’re growing and physiologically active, as opposed to when they’re dormant in winter.”

The researchers readily admit that the present density of the region’s oak/hickory forests may be an artifact of past disturbances, including fires caused by Native Americans, intensive logging after Europeans arrived, and the disappearance of the American chestnut due to blight.

And if such projects seem like a whole lot of effort and expense by us humans merely to orchestrate the natural order of things, Greenberg responds: “It depends on your objectives. If we’re satisfied with oak eventually becoming less dominant in the ecosystem, then there’s no need to do active management or research. If we want to keep our oak/hickory forests, for whatever reasons, then we need to know how to do it.”

One thought on “Green Scene: Up in smoke”