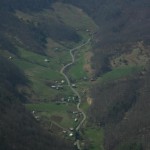 Waste not: In the 1980s, the residents of the Sandy Mush community in north Buncombe County found their peaceful valley was one of several sites proposed by the U.S. Department of Energy for a high-level nuclear waste repository. No repository has been built; high-level waste still awaits a final resting place. Photo by Jerry Nelson; flight courtesy of Southwings. 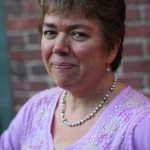 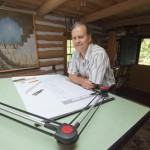 Following the document trail: UNCA Adjunct Professor of Environmental Studies Greg Olson collected a host of documents on the history of the DOE search for a nuclear waste repository and its interest in a WNC site. Photo by Jonathan Welch

The imminent release of a report by the Blue Ribbon Commission on America’s Nuclear Future has revived fears of a high-level radioactive-waste repository in Western North Carolina. In the 1980s, local activists fought such a proposal to a standstill; mindful of that, concerned residents are tracking the commission’s activity. Established by President Obama last year, it’s charged with evaluating alternatives and making recommendations for storing, processing and disposing of spent fuel from nuclear power plants and related high-level waste. The draft report is due out July 29 (see box, “Sneak Peek”).

But fears of an imminent WNC waste dump are misplaced, maintains Timothy Frazier of the Department of Energy. “The commission hasn’t been charged to select a site anywhere to do anything,” he reports. “There’s this perception that we’re going to issue a report that says, ‘Put it in Sandy Mush,’ but that’s just not going to happen.”

And in any case, it appears that the transport and incineration of radioactive wastes may constitute more immediate threats to the area.

To view the draft subcommittee reports from the Blue Ribbon Commission on America’s Nuclear Future, visit www.brc.gov. The final report is due Jan. 29, 2012.

Radioactive material is treated differently depending on how long it must be kept isolated to avoid contaminating water, soil and food supplies. Low-level waste (such as contaminated protective clothing, cleaning equipment, filters and medical material) is typically buried (or incinerated and then buried) at commercially operated facilities approved by the Nuclear Regulatory Commission.

But high-level waste must be kept isolated for tens of thousands of years before it returns to the original level of radioactivity of the ore from which it was produced — and far longer before it ceases to be a health hazard. The favored disposal approach is deep burial at a geologically stable site. To date, however, no nation has managed to surmount the considerable technical and political difficulties to accomplish deep burial, though various countries are said to be developing permanent sites.

Meanwhile, nuclear power plants keep generating highly toxic high-level waste, and the question of what to do with it remains the most controversial aspect of nuclear power, according to the nonprofit Nuclear Information and Resource Service. For decades, waste has been “temporarily” stored in specialized casks and cooling ponds at more than 100 sites across the U.S. Vulnerable to earthquakes, power failures and terrorist attacks, these sites aren’t considered suitable for permanent storage.

As early as 1982, the Nuclear Waste Policy Act envisioned more than one high-level repository; a 1987 revision called for one in the East (where most of the waste is generated) and one in the West (which contains large expanses of arid, sparsely populated land).

In 1986, the DOE released a report on its efforts to find one or more permanent homes for high-level radioactive waste. The so-called “SE5 quadrangle,” a 105-square-mile area including Big Sandy Mush and areas near Canton in north Buncombe County, was one of a dozen places in the eastern U.S. the report identified as a potential deep-burial site.

That same year, the N.C. Geological Survey published the first detailed geologic maps and rock descriptions for the area as the agency looked for the geological features the DOE deemed desirable. The SE5 quadrangle failed to meet federal size and depth criteria, according to Greg Olson, who teaches environmental studies at UNCA; it was also found to possess porous bedrock, creating a risk of widespread ground-water contamination.

Local activists pushed back hard. “Have you been up to Beaverdam Gap over Big Sandy Mush?” queries music producer Steven Heller, who was part of that campaign. “It’s like, ‘Let’s find the prettiest place in the world and destroy it.’ The moon would be a good place” for a high-level waste repository.”

Ultimately, the focus shifted west, to Nevada’s Yucca Mountain. Critics say the site, mandated by Congress, never met the original criteria; and after more than three decades of planning and billions of dollars (much of it paid to utilities because the government failed to open the site as agreed), the proposed facility remains bogged down in a regulatory and litigious quagmire.

The eastern repository, though, was never officially canceled, and in 2008, the DOE told Congress that additional storage capacity will be needed.

Even without a local storage site, however, large amounts of high-level waste could end up being transported through the Asheville area en route to the Savannah River Site in South Carolina, local activists note.

Supporters of the idea include “everyone from Sen. Lindsey Graham down to community-college leaders determined to train the next generation of nuclear workers,” says Mary Olson (no relation to Greg Olson) of the nonprofit Nuclear Information and Resource Service. And if they get their way, the Asheville resident asserts, “We could see thousands of trucks with nuclear waste traveling on I-40, I-26 and I-240.”

Already, says the Asheville-based group Common Sense at the Nuclear Crossroads, trucks carrying mostly low-level radioactive material routinely travel through Asheville on their way to the Savannah River Site or other processing facilities in the region.

“We may one day see casks of spent fuel, the most highly radioactive stuff of all, headed west through Biltmore Village on the Norfolk Southern line,” Asheville-based investigative journalist Michael Hopping wrote in a 2006 report for The Indie. “Given our mountainous terrain and a pair of prime accident locations — the Smokey Park Bridge and the junction of I-40 and I-26 — it seems reasonable to ask how prepared we are for serious mishaps involving these shipments.”

Blowin’ in the wind

In the meantime, the Nuclear Regulatory Commission recently approved licenses for importing 1,000 tons of low-level radioactive waste from Germany for incineration in Oak Ridge, Tenn.

Incineration is monitored to meet state air-quality rules, says Tisha Calabrese of Tennessee’s Department of Environment and Conservation. But the health risks are greater with older incinerators, activists note, and the Oak Ridge incinerators have been burning radioactive waste since the late 1980s.

Despite having state-of-the-art equipment, the grass-roots group Nuclear Watch South asserts, Germany wants to ship its waste elsewhere, because that country’s limits on the release of toxic byproducts are much stricter than Tennessee’s.

It’s hard to know what this means for WNC residents. Our prevailing winds come from the west, but the closest monitoring station, in Morganton, runs only 24 hours once a month, according to William Jeffries of the state’s Radiation Protection Section. Jeffries said he was unaware of the German waste deal but would look into it.

Activists, however, worry that Tennessee may now become a global destination for radioactive waste. “EnergySolutions previously applied to import 20,000 tons of Italian nuclear waste to Oak Ridge,” writes blogger Kathleen Ferris of Murfreesboro, Tenn., co-founder of Citizens to ENDIT. “We can probably assume that the Italians will be next. Then who? The Japanese? … Who would stop it?”