Assistant City Manager Cathy Ball sat on the dais at Asheville City Council’s June 27 meeting, filling in for absent City Manager Gary Jackson. It didn’t look like a comfortable place to be as Ball fielded sharply worded questions from Vice Mayor Gwen Wisler and other members of Council about how cost projections for a major infrastructure project in the River Arts District underestimated construction costs by more than 50 percent — and why city staff kept mum for a month before informing Council or the public.

The River Arts District Transportation Improvement Project has been billed as a transformational undertaking that will revitalize Asheville’s riverfront, encourage private investment and provide residents of the RAD and surrounding areas with new opportunities to safely get around by foot, bicycle, public transit or car. More than just a roadway, the project was to have anchored a greenway network that would eventually connect to many more miles of greenways throughout Buncombe County.

In the wake of cost overruns, city staff scaled back those plans, eliminating three greenway sections and a “complete streets” package for Livingston Street that would have included pedestrian, bike and transit amenities. Still included in construction plans are 2.2 miles of roadway — which include the French Broad River East Greenway along Lyman Street from the Amboy Road bridge and along Riverside Drive to the Jeff Bowen Bridge — 6 acres of public open space, parking, a boat ramp, new trees, bike racks, a pilot stormwater and wetlands garden and underground stormwater infrastructure.

The final price tag for the project comes in at $54.6 million. A federal TIGER VI transportation grant will offset $14.6 million of the cost, while a Tourism Product Development Fund grant from the Buncombe County Tourism Development Authority will pitch in another $2.5 million. In approving the project, Council pledged an additional $6 million in city funds above what had previously been budgeted, bringing the city’s total investment to over $32 million.

Wisler eased into her questioning with some praise, complimenting city staff on sharing information with the public and incorporating their feedback into project plans. “So the public input on this project has been stellar — up to a point,” the vice mayor said. “But then, when the bids came in, it felt like radio silence.”

Why, she continued, didn’t staff let Council members and the public know the magnitude of the cost overruns in time to allow some opportunity to have a say in which the portions of the project will be delayed?

“Your questions are fair,” responded Ball. “When we received the bids — and that was a matter of five, six weeks ago — our primary concern was how to maneuver through and work with the Federal Highway Administration to maintain the $14.6 million.” That money was awarded as a TIGER VI grant in 2015, and it comes with strings attached, Ball said.

According to Council member Cecil Bothwell, who spoke to Xpress before the meeting, he and other members of Council were notified of the unexpectedly high bids on June 19. Council members then met with staff in groups of two (to avoid convening an illegal quorum outside of a public meeting) and learned about the reduced scope of the project.

“Given, honestly, the dynamics of the changing world in Washington,” Ball explained, “we were very concerned about being able to move fast and being able to get this funding secured.”

Even before the bids were opened and the extent of the difference between estimates and construction costs became clear, there were signs that things might not pan out as expected, judging from Ball’s remarks.

The city engaged Beverly Grant/Barnhill Construction in December 2016 for pre-construction services including a final cost estimate. The company projected then that construction costs would exceed a prior estimate of $50 million by $6 million. Council included an additional $6 million to cover the revised estimate in its budget for the Fiscal Year 2017-18, which begins July 1.

When the first rounds of bids were received, it became clear that a maximum of two companies had submitted bids for each of the six project components. One of the bidders was Beverly Grant/Barnhill. As required by state law when fewer than three bids are received, Ball explained, the bidding process was re-opened and a second round of bids was received two weeks later. Again, only two bidders responded, but the city was allowed to unseal the bids.

The winning bidder, Beverly Grant/Barnhill, was the same firm that had in December estimated the project at $56 million. The company’s final bid came in at $76 million and did not include at least one component of the project, the Livingston Street Complete Streets package. No bidders competed for that portion of the work, Ball said.

Asked after the meeting to confirm that Beverly Grant/Barnhill had underestimated the final construction cost by at least $20 million and still won the project, Ball said that was the case.

Responding to a question from Council member Julie Mayfield about whether the city could have chosen to scale back road construction and retain all of the planned greenways, Ball said she doubted that scope of work would have been acceptable to the Federal Highway Administration for the purpose of retaining the $14.6 million grant.

Another condition of the federal funding, Ball said, is that construction must begin by Aug. 1. In order to comply with that requirement, the city must give 30 days notice to the contractor to mobilize for construction. Thus, if Council had declined staff’s request to authorize the revised project scope and budget on June 27, the future of the project would have been uncertain.

Council voted to incorporate a change to the revised project scope that seemed to have originated with former Council member Marc Hunt. Speaking during public comment, Hunt urged Council to direct staff to revise the greenway that will run alongside Lyman Street from Amboy Road to the future roundabout on the former site of 12 Bones Smokehouse. Originally, plans included adding a protected bike lane along that stretch of the road, as well as a pedestrian sidewalk on the opposite side of the road from the greenway.

The revised scope eliminated the protected bike lanes and sidewalk, leaving only the 10-foot wide greenway. Hunt proposed widening the greenway to a 16-foot wide “multi-use path” with striping to better accommodate future volume on the greenway, which will eventually connect with other segments of the greenway system. Hunt has also been working to promote a $4 million greenway and whitewater park north of the RAD projects in Woodfin.

According to Manheimer, staff had advised that the change could be made to widen that section of the French Broad East Greenway through a change-order process without rebidding the entire project.

City staff, Council, stakeholders and members of the community had all been “shocked” by the final bids on the project, Manheimer said. “We’re really between a rock and a hard place,” she continued, noting that there’s no indication the construction environment and its skyrocketing costs will change anytime soon.

Reached after the meeting, Wisler pointed out that the city has already sunk significant funds into relocating utilities and acquiring property to prepare for the project. She said that not moving forward hadn’t been seriously contemplated, though the city might not have been able to proceed if the federal funding had fallen through.

In the end, members of City Council voted unanimously in favor of the revised scope and budget for the project. Council member Gordon Smith was absent.

(For more information on the original scope of the project plans, see Road to redevelopment: Big infrastructure upgrades on RAD’s horizon.)

Editor’s note: Subsequent to the publication of this article, members of city staff provided clarification about the nature of Beverly-Grant/Barnhill’s contract for the RADTIP projects. Xpress’ article, as published above, accurately reflects the information provided by the city, in particular at the June 27 meeting of City Council, at the time of publication online on June 28 and in print on July 5. The information provided by the city subsequent to those dates includes:

BG/B was retained as Construction Manager At-Risk and prepared the final cost estimate for the project as described in the story above. BG/B then managed the bidding process, which involved multiple building contracting companies. As Construction Manager At-Risk, BG/B is responsible for overseeing and managing the RADTIP projects, not actual construction. While BG/B holds the master contract for the project, other companies submitted sealed bids for various portions of the construction work.

The $76 million figure given by staff members on June 27 also includes the cost of project-related real estate purchases, utility relocation projects and other infrastructure work already completed, and other items. No itemization of the $76 million figure was provided at the June 27 meeting; the city provided additional information in response to public records requests submitted by Xpress on July 3. The results of those requests were provided to Xpress over a period from July 10 to Aug. 14.

For information purposes, the executed contract with BG/B for the RADTIP projects is appended below. 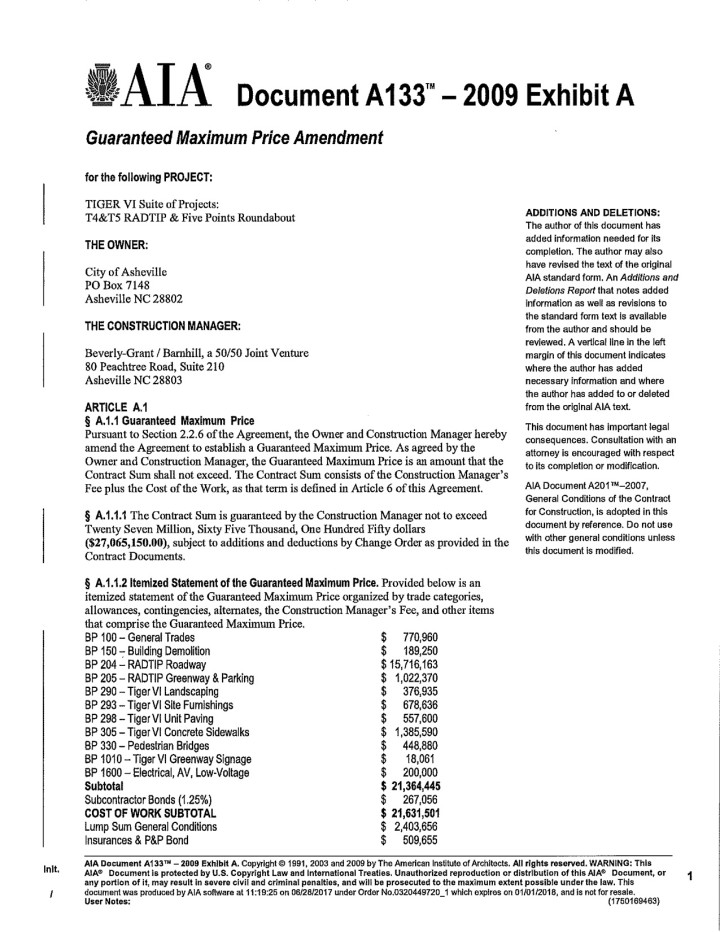 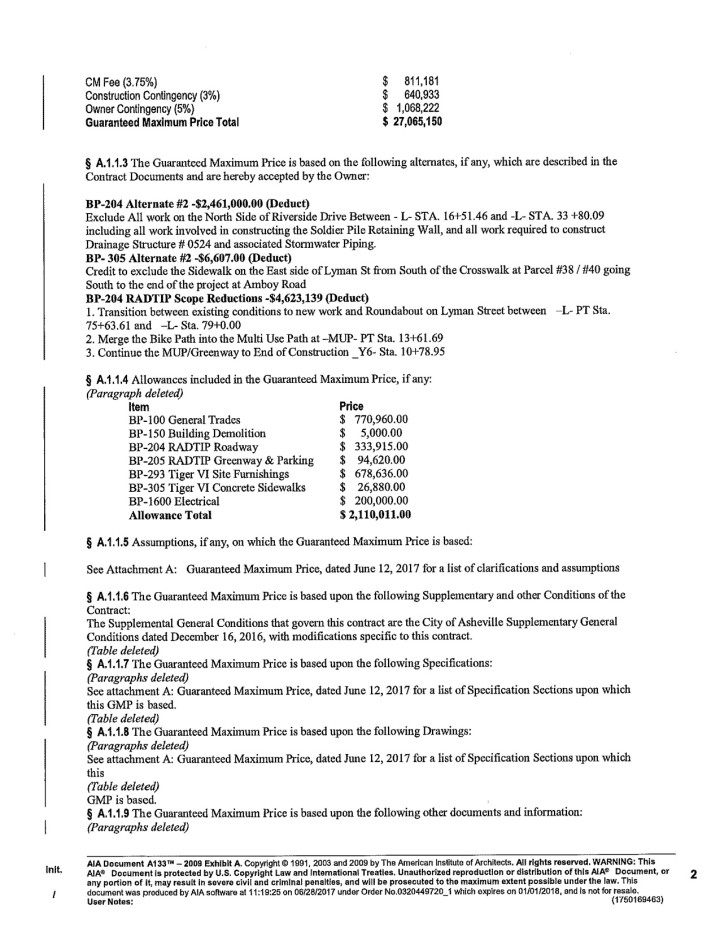 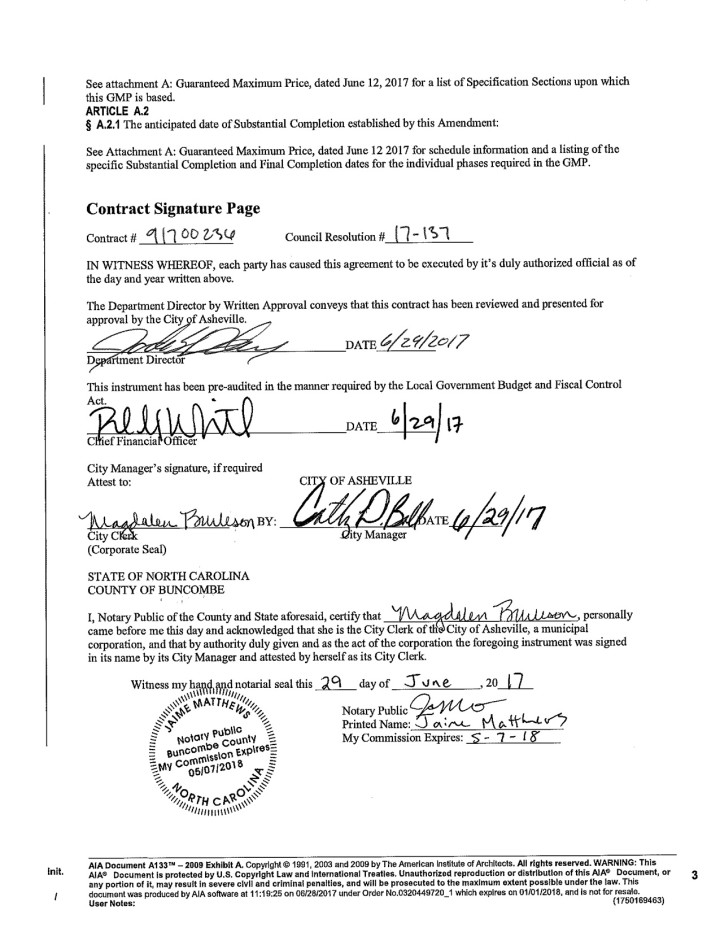 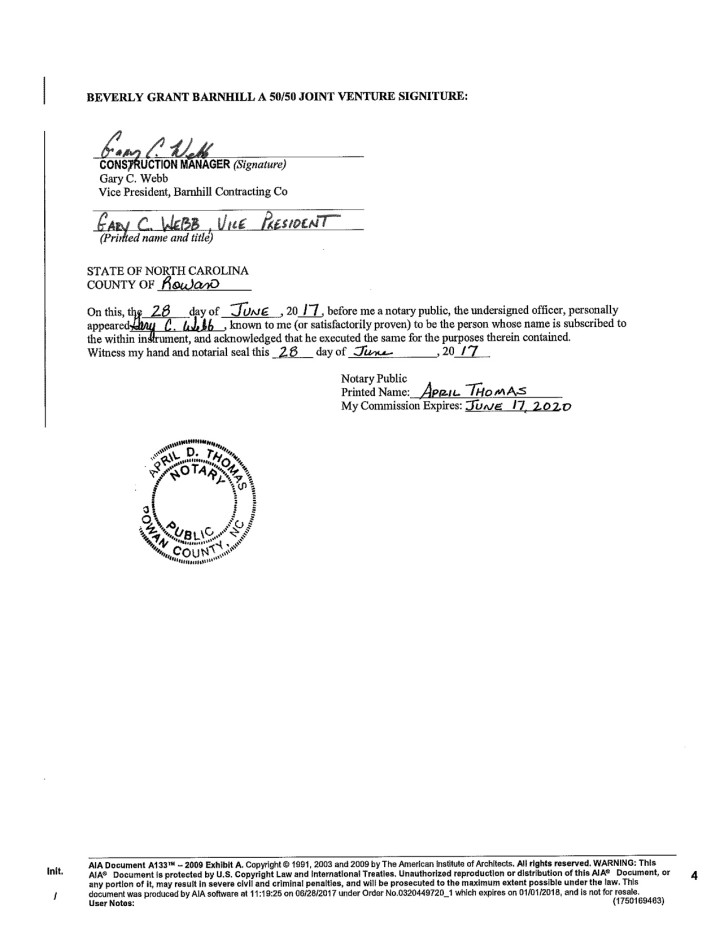