Several animal rescue organizations were deployed to Eastern North Carolina communities in the wake of Hurricane Matthew’s landfall there. So far, Brother Wolf Animal Rescue, both in Asheville and in Marion County, S.C., has recovered about 400 animals since the hurricane struck. The Durham County Sheriff’s Department and the Charlotte-Mecklenburg Police Department had rescued 51 and 16 animals, respectively, as of Oct. 19 — including dogs, cats and a pet rabbit.

Brother Wolf to the rescue

“Our search-and-rescue team had only been back from the Louisiana flood relief efforts for about a week when Hurricane Matthew started bearing down,” says Paul Berry, executive director of BWAR.

“We have a chapter organization in Marion County, SC, and the county shelter there is in a low flood plain. So in advance of the storm, our staff helped move nearly 200 shelter animals to higher ground at a make-shift relief shelter across town,” he continues. “The old county shelter did end up flooding, and we’re told the foundation has significant damage.”

In response to the flooding, WNC’s Brother Wolf Animal Rescue partnered with Pilots N Paws as well as organizations such as Kinship Circle and Tri-State County Animal Response Team from Missouri and Ohio, respectively. Through their combined efforts, hundreds of adoptable animals were evacuated from vulnerable shelters in North Carolina and South Carolina to inland facilities in cities like Charlotte and Raleigh, and even as far as Georgia, Maryland and Connecticut, thereby freeing up space for pets of families temporarily displaced by the hurricane.

“We had pilots who volunteered to fly into the Mullins Airport in Marion County [S.C.] and transport shelter animals out of there that way,” Berry says. BWAR also evacuated over two dozen shelter animals from nearby Columbus County, N.C., for the same reasons.

The Humane Society of the United States coordinated with its own emergency placement partners.

“We moved nearly 90 adoptable animals from the Wayne County Animal Adoption and Education Center to make room for pets evacuated due to the impacts of the storm,” says Erica Geppi, North Carolina state director for the Humane Society of the United States. “We are also working with Lenoir County to assist transporting adoptable animals from their shelter to make additional space for pets evacuating from the flooding, and our volunteer network of district leaders has been organizing supply drives to support shelters impacted by the severe flooding.”

Immediately after the hurricane blew through, search-and-rescue teams from organizations all over the Southeast deployed. These efforts were coordinated by the N.C. Department of Agriculture and Consumer Services, explains Melissa Knicely, public information officer for Charlotte-Mecklenburg Police Department’s Animal Care & Control Division.

“Their emergency management team initiated a conference call with a large number of organizations several days before the hurricane made landfall,” says Knicely, who added that the teleconference focused on compiling available resources and personnel for search-and-rescue efforts and to build an inventory of facilities able to provide animals shelter and medical care. “They gather the information early and can match the needs the best.”

Knicely also serves as the communications chairperson for the N.C. Animal Federation, a nonprofit coalition of animal welfare organizations that provides training and resources to its member groups. In all, five NCAF member organizations deployed volunteer teams to Edgecombe, Lenoir, Pitt and Robeson counties. Six more organizations, like the Cashiers-Highlands Humane Society and the Yancey County Humane Society, remained on standby for support, while also collecting supply and monetary donations for the relief efforts.

“We were unexpectedly surrounded by water for five days after the storm,” says Mendy Morris, assistant director of the Robeson County Humane Society in Lumberton. “There was extensive damage to the city’s water treatment facility, so bottled water was necessary for both human and animal consumption.”

For shelters hit by the hurricane, donations from outside organizations are critical to care for the animals following the storm.

“These donations of food, water, linens and other supplies have not only sustained us but has enabled us to also help those in the community who need food or water for their pets,” says Morris.

By Thomas S. Chickos
I am a private criminal investigator by trade, and have been for 20 years, but I have been a volunteer with Brother Wolf Animal Rescue since 2009.

I deployed to Marion, S.C., on 10/09/2016 and returned to Asheville late 10/15/2016. This was my first deployment in search-and-rescue with our rapid-response team. We, along with other agencies, were able to rescue dozens of stranded animals.
I was on the water all week with my rescue partner, Eric Phelps. Our mission was getting the boats into the water first thing in the morning and rescue until almost dark each day. I have always considered myself to be both physically and mentally tough. This mission would change my mind.

We received a list of calls for service from our command center. This list came from people who were not able to get their animals out before the flood and were desperate to reunite with their loved ones without the means to get to them. Most people said that the water rose so fast that they themselves almost didn’t make it out. Nichols was the area we conducted search and rescue.

On the first day we fully loaded the boats with animal crates, food and water and proceeded into the floodwaters to begin our search. Sounds simple, right? That is what I thought. Wow, was I wrong. You have to start about a mile out of town and make your way in. That requires you to drag a boat that is loaded with supplies by a rope on foot through all the areas that are not covered with water or with shallow floodwater.

We soon learned that the homes outside of town were all underwater as well. We could see the loss right away. Most people lost everything. It was heartbreaking passing homes and vehicles destroyed, and there was nothing we could do. By the time we got into town it was clear that the entire city was underwater. Nothing was spared.

We began searching the homes on our list. Many were in areas that were hard to get boats into because of fences and debris, so we had to abandon the boats and jump in the water. The only problem with getting into the water was that you are now chest deep in fuel oil, gasoline, human waste, garbage and God knows what else. That is the easy part. Then you have to get into a home that is full of black water, floating debris and heavy objects that you can’t see under the water. You then have to somehow search the entire house for the animal that is terrified and hiding. Once you locate the animal, they don’t know you, so now they are even more afraid. But now we need to get that animal out of the water, into a crate and get them, and ourselves, to safety.

You do this house to house all over town, all day every day, until your mission is over. Honestly, the hardest part is having to quit for the day. Knowing that you can’t get to all of them and that they are going to have to try to survive one more night, alone. Some of them don’t….

Dogs, cats, horses, goats, chickens, snakes, turtles, a lizard and many more were saved. It was truly rewarding but mentally and physically exhausting at the same time. I would absolutely do it all over again.

When the dam broke

As Matthew pressed close, many North and South Carolina residents thought they would have to leave their homes for only one or two days, deeming it safe to leave pets behind, Berry says.

“As the rivers rose and began to crest about 48 hours after the hurricane came through, a dam broke in Lumberton, releasing a huge rush of water which completely flooded the city of Nichols, South Carolina, in Marion County,” he says. “A lot of the damage came from the dam break, and nobody saw it coming. That was a really sad outcome.”

“These guys were calling from the field in tears, talking about a rescue they had just gotten through,” Berry recalls. “There was a lot of sadness out there that kind of weighed them down, but it also fueled them. They would be searching for one animal for three hours. First, they couldn’t find the house, then they can’t get inside, then there’s no cat in there. A few hours later, they finally text you a picture of one of them holding a little gray cat that’s terrified and skinny.”

In all, BWAR spent more than $50,000 on flood relief efforts in Marion County alone, he says, and the organization hopes to recoup some of those costs at their annual “Howloween Walkathon” this Saturday.

For some people, especially the elderly, a pet may be the only family they have, Berry notes. Many homes in Nichols were submerged in more than 5 feet of water, but that didn’t matter to the families Berry encountered.

“Not a single time did anybody say, ‘How does my house look?’” he notes. “All they wanted to know was that their pet was OK.

“The residents had the clothes they were wearing when they left their homes, and that’s pretty much all they had,” Berry continues. “The gratifying part was reuniting people with their pets. The rest of it was just a big, wet, sad mess.” 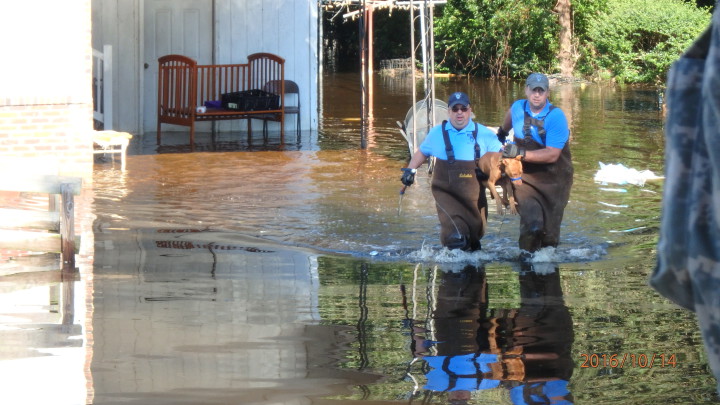 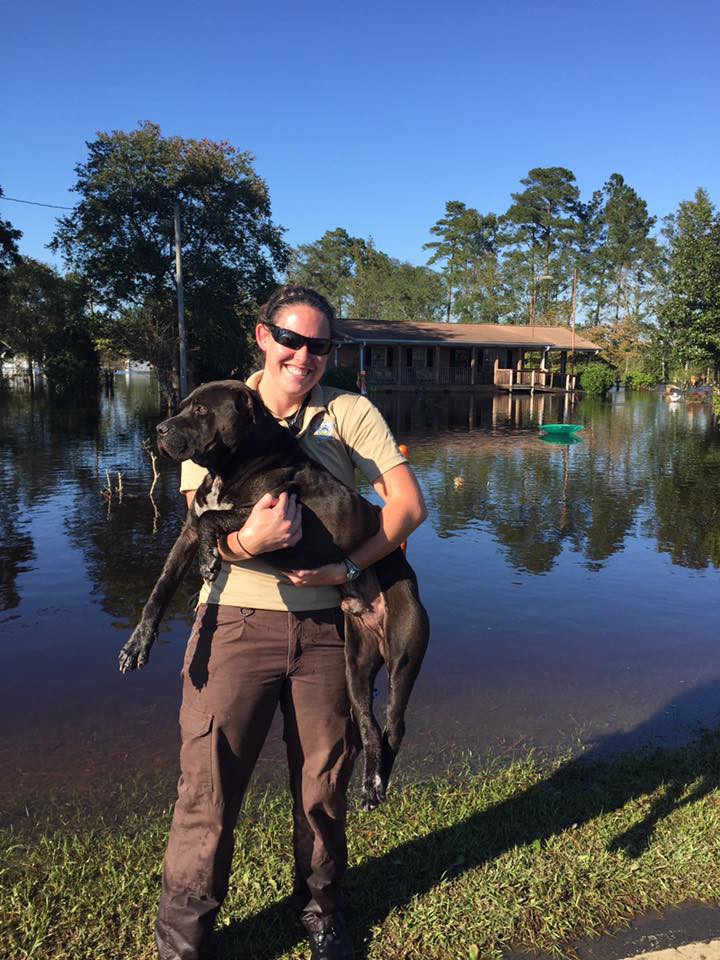 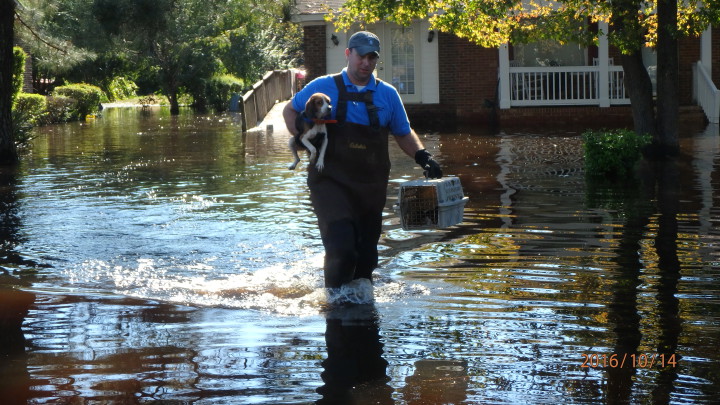 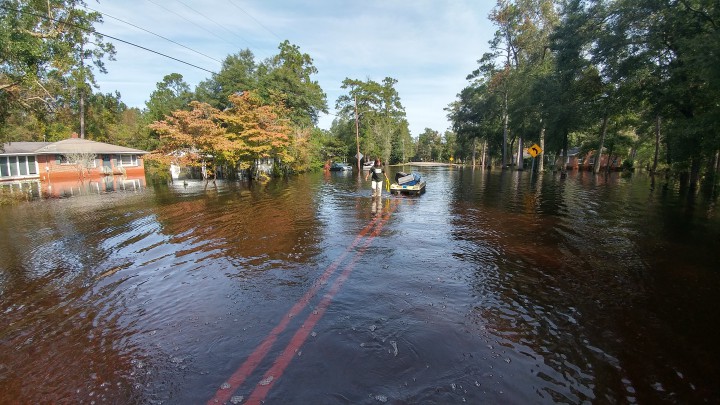 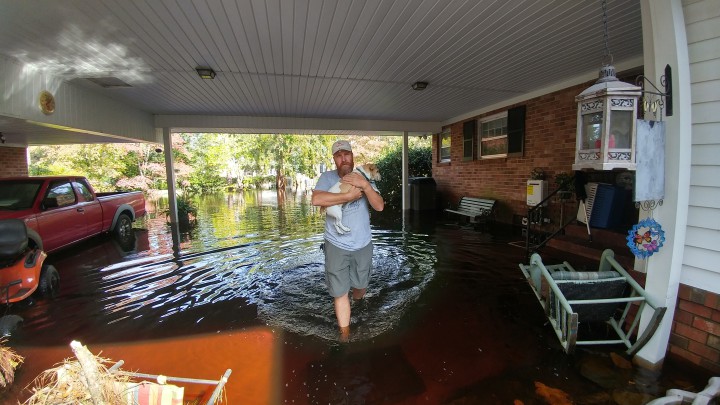 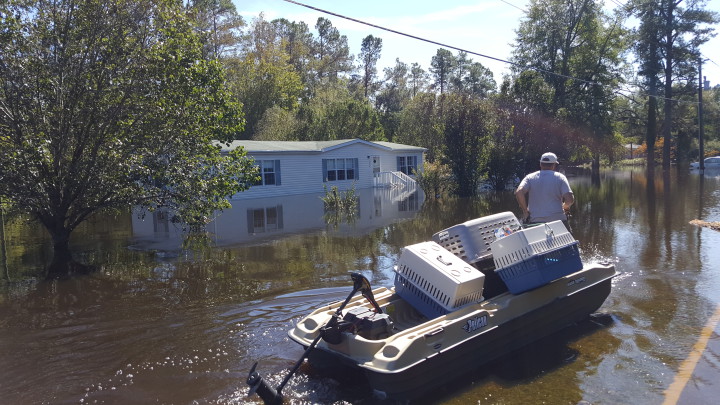 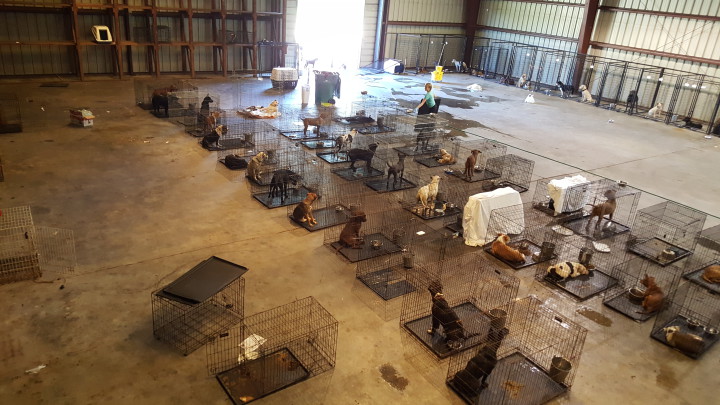 Rachel freelances for Mountain Xpress. She still can't believe she gets paid to meet new people and explore Western North Carolina on her days off from her "real" job as a direct care provider at a residential treatment center for youth (which she also thoroughly enjoys). To round it out, she also likes to drink wine, swim, backpack and cook, but not in that order.
View all posts by Rachel Ingram →