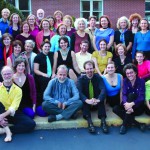 A place on the choir: No auditions are necessary to join this community chorus, and the repertoire ranges from sacred to secular songs. 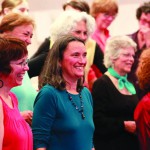 There’s an old saying, “Who wants to sing, sings.” The West Asheville Community Chorus nurtures a passion for singing on this basis. Regardless of participants’ experience or skill level, the group’s unofficial motto applies: “Sing your heart out.” Everyone has a heart (and some kind of voice).

“No one has to audition,” says chorus leader and WNC native Suzannah Park. “The only requirement is that you want to sing.”

Park and her singing partner and husband, Nathan Morrison, are also members of the Starry Mountain Singers, a 10-voice touring ensemble that performs traditional songs and original compositions from its members. The couple started the chorus after friends asked why they didn’t do at home what they do on tour. “We set a high bar,” Park says. “But we trick people into reaching that bar without jumping.”

As with Park and Morrison, many of the Starry Mountain Singers started out at Village Harmony, a world-music summer camp in Marshfield, Vt. Park progressed from camper to teacher with Village Harmony, eventually touring with the organization, mostly throughout the U.S. and in Europe. In mid-February, Park returned from South Africa, where she taught a Village Harmony camp with native teachers and toured with singers for a total of four weeks.

“Organizations like Village Harmony recognize how music takes away class and race,” Park says. Morrison agrees, and believes that music in the new global community has the power to bring people together in unprecedented ways. “People are realizing it’s not enough to be connected by these devices,” says Morrison.

WACC favors a repertoire of sacred and secular music from around the world — from the Caucus Republic of Georgia, Bulgaria and South Africa, to the shape-note-style songs and hymns of 19th-century New England. Park and Morrison draw on the eclectic song bank from their years learning with Village Harmony. “This is music that is meant to be sung together, rather than as a performance to a court or an audience,” Morrison says.

Chorus member Carole Berlin appreciates Morrison and Park’s musical selections, and how encouraging the two are to reluctant singers. “They say to people who haven’t sung in years, ‘You can do it!’ and [the singers] walk away believing they can,” says Berlin, who has been singing with WACC for multiple seasons.

Though most of the performances have been primarily a cappella, WACC will feature a band for its set of Balkan songs this season, with chorus members contributing music on clarinet, trombone, accordion and traditional Balkan drums.

Park is excited about several songs from South Africa that will be part of the current season. These traditional songs are written for dancing; steps will be taught with the words and music — a first for WACC.

Even for those with experience, learning songs in other languages poses a unique challenge, although some singers adapt to the words with ease. “It’s nice to have that mix and to have so many different angles into the music and have people be comfortable,” says Morrison.

For the South African songs, only words are written on the song sheets, no musical notes — a kind of nod to those in the chorus that have been taught entirely by ear.

According to the WACC website, the chorus ranges from 40 to 50 singers of mixed ages and musical backgrounds. Since the start, WACC has spanned generational divides. “It’s so fun to sing with WACC and be a part of the rich cultural aspect of the music,” says singer Diane Rhoades. “What is brilliant is the therapeutic surprise of singing, whether I ‘do it right’ or not.”

Rhoades is a member of the Hendersonville a cappella group The Atomic Sisterhood, and she committed to singing with WACC after hearing the chorus’ first performance. Rhoades says she regularly gets goose bumps in WACC performances. “There is nothing like it,” she says. “I have cried at least once in every performance from the inexplicable beauty.”

For 12 weeks before season performances, the chorus holds Thursday night rehearsals, the first four of which are open to interested singers (the last open rehearsal is March 8). After that, the official chorus is formed. For the spring season, rehearsals will take place in the chapel at the Brooks-Howell Home at 266 Merrimon Ave., from 7 to 9 p.m. (The class fee is $7-$12 sliding scale, per class, and barter or trade is accepted.)

Last year was the first fall season for WACC, which traditionally has one season of rehearsals and performances in the spring. The 2012 performance dates are set for May 19 and May 20, but locations are still being worked out, says Park.

The weekly chorus classes are casual, although showing up is strongly encouraged. Morrison and Park believe a larger group makes it easier for everyone to sing. “It’s very relaxed environment, it’s very playful,” says Park. If you’re not getting it down, we’ll go over it again. The goal is that people feel empowered to feel good about their personal contribution to the collective.” Singing in a larger group is easier, say Park and Morrison, because there isn’t the pressure of being singled out — the group members carry each other musically.

“I think Nathan and I bring out the best in people, because our delight in their ability is higher than they might believe themselves,” Park says.

The teaching process is often complicated. The subtle differences between a Balkan or a Georgian song can be hard to convey. But Park recognizes the challenge in making people understand how to sing vowels a certain way, demanded by how the song was sung traditionally. “The kind of songs we’re singing, they are different in tonal quality,” Morrison says. “They don’t have the affected quality that some choruses have — it’s a natural sound.”

Chorus members are quick to catch on, and some have even requested vocal coaching from Park in private or in small groups, to further hone their singing skills outside of chorus rehearsals.

“Suzannah explains things so exquisitely,” says Berlin. “It’s a joyous thing to sing this complex music with other people. It’s something unique.”

For more information on WACC, visit http//www.suzannahpark.com or email morrisonpark@gmail.com.