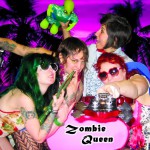 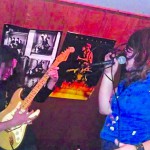 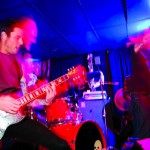 Asheville's punk scene may be underground (if it were mainstream, it wouldn't be punk, right?) but it's also vibrant and busy. Looking for a punk show? Check out the Asheville Punk Rock Community Networking Machine (http://ashcomcal.blogspot.com), which boasts a monthly calendar of shows and includes not just music but art openings and spoken work events.

Or, you can go to Punk You Asheville. The local showcase, held at the Orange Peel this week, features the three acts (Just Die!, Zombie Queen and Pleasures of the Ultraviolent) voted best punk bands of 2011 in Xpress' annual Best of WNC readers' poll.

Also this weekend: punk showcases at The Boiler Room (Pawtooth, Saint Famine Society, No Destination, Venus Gasoline and The Deadwire Band on Friday, March 9) and the Get Down (The Dispersants, House of Building and Judas Horse on Friday, March 9; Everymen, Transylvania Transport Co. and Big Nasty on Saturday, March 10) with many local acts ranging from punk and rock to Southern gothic and prog.

To set the tone for a full night of screaming guitars, thumping bass, thrashing drums and full-on vocal assult (in the best possible sense), Xpress asked these irreverent local rockers to tell us a little bit more about themselves. Tiger Beat-style. (That’s right — all interview questions were culled form back issues of Tiger Beat magazine.)

Emily Gibbs on vocals, Kristen “Wifey” Sears on guitar, Crystal “Coop” Kelly on bass and Tenni Arslanyan on drums. (Answers are from the band, collectively.)

Q: Have you ever had a celebrity crush?
A: Yes, Jeffrey from Get Him To The Greek.

If you were abducted by aliens, what CD, book or movie would you bring along for the ride?
For us: Hitchhikers Guide to The Galaxy; for them: How To Cook For Forty Humans.

Do you have an bad habits?
Don't ask, don't tell.

What's your idea of a perfect date?
Going to Wal-Mart and riding the motorized scooters.

What are you going to be doing 10 years from now?
Going to Wal-Mart and riding the motorized scooters.

If you could change your name to anything or keep it the same, what would you do?
Get sponsored by Dollywood and become Dolly's Zombie Wood Queen.

What is your secret talent?
Falling down!

How did you celebrate when you were voted one of the best local punk bands in the 2011 Mountain Xpress readers' poll?
Big party at Jeffrey's.

Q: Do you have any big plans with your music coming up?
A: We're hoping to just get better and play some bigger venues, but nothing concrete right now.

What word in the English language do you wish you had invented?
Shriek.

What animal best describes the kind of man/woman you'd be interested in?
I could be snarky and say python, so I'm going to.

What’s your life like outside of playing in a band?
Way cooler than most people I know.

Does it make you uncomfortable when people ask to see your abs?
Nobody ever asks that. They ask to see my breasts a lot, though.

What was your most embarrassing on-stage moment?
When our first drummer forgot how the song ended and we played it about two minutes long.

If you could live in any past era which would it be?
17th century Japan.

Q: Have you ever had a celebrity crush?
A: Yes. I hugged Kelly Clarkson at a concert one time while she was singing. I thought I was going to marry her for months after that.

If you were abducted by aliens, what CD, book or movie would you bring along for the ride?
CD: Samiam's Clumsy; book: Stephen King's The Stand (so I would actually finish it); movie: Would I have a TV on this spacecraft? If so it would be Boyz in the Hood.

Do you have any bad habits?
Yes. I don't go to bed ‘till at least 3 a.m. every night. I talk loudly. I use the bathroom with the door open. The list goes on…

What do you do for fun?
Play music. I don't drink or do drugs, so I have to be creative.

What's your idea of a perfect date?
Enjoying time spent with another person, could be many things.

What are you going to be doing 10 years from now?
The world ends this year.

What is your secret talent?
I can juggle.

How did you celebrate when you were voted one of the best local punk bands in the 2011 Mountain Xpress readers' poll?
I called my band members and said, "Hey, we won again."

what: Punk You Asheville (featuring Just Die!, Zombie Queen and Pleasures of the Ultraviolent)
what: Showcase with Pawtooth, Saint Famine Society, No Destination, Venus Gasoline and The Deadwire Band
where: The Orange Peel, Saturday, March 10 (9 p.m., all ages. $5. http://theorangepeel.net)
where: The Boiler Room, Friday, March 9 (9 p.m., $5. http://www.thegrovehouse.com/ashevilleunderground/index.html)