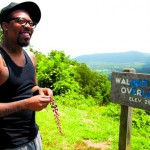 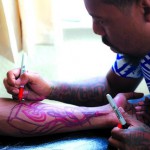 “We were all born with a purpose and a special gift,” says Miya Bailey, and his own life is proof. As founder of City of Ink, a thriving tattoo shop and art gallery in Atlanta, he found his talent early. Bailey began developing his particular purpose and gift in the housing projects of Asheville.

Bailey spent his early childhood living in the Klondyke Apartments at the end of Montford Avenue. Later, his family moved to the Southside neighborhood near the Erskine Street apartments, then to West Asheville across from Pisgah View Apartments. Not the Asheville of tourism brochures, the neighborhood was not always a comfortable place. Those environments shaped Bailey in profound ways. As he puts it, “I was made into a man in West Asheville.”

From early on, Bailey was encouraged to create. “My mother made me draw every single day, so she nurtured my talent, my family nurtured my talent,” he explains. “When I was going to Asheville Junior High (now Asheville Middle), on South French Broad Avenue, after school we went to the Delta House where they had teachers like Ms. [Shirley] Whitesides who helped me with art.”

As his younger brother, Damion Bailey, remembers, “I knew that Miya would go on to bigger things long before tattooing. His art would bring home certificates, gold keys and trophies long before his art was placed on bodies.”

By high school, Miya was making money using his artistic talent. “Asheville in the early ’90s was very segregated,” Miya says. “People who had money weren’t looking for art in the ‘hood, and nobody in the ‘hood was buying paintings. So I started doing screen printing, and that took off, but I wanted more and that’s when I started doing tattooing.”

As Damion remembers, “Miya first began tattooing by wrapping a thread around a needle (to soak in the ink) and making his mark one poke at a time. … Then he learned how to make a tattoo gun with a hairdryer motor.” These crude methods were the first steps that set Miya on his path. “The T-shirt thing was awesome, because people were wearing my art, but I wanted it on more of a permanent space,” Miya says.

But Miya had to hone his craft. “I knew I needed to get my skills up, so I started looking for an apprenticeship,” he says. “I called every tattoo shop in Atlanta and no one would give me a chance.” Eventually, he ended up finding Julia Alphonso of West End Tattoo. “She was a white tattoo artist teaching black people how to tattoo. I was there at the right time.”

And, there was early success: “The first person I tattooed was Usher, Usher Raymond,” Miya says. “My first week in Atlanta and I tattooed Usher.”

In 2000, Miya helped open Prophet Art & Tattoo Shop in Atlanta. It was the first tattoo shop on Peachtree Street. As he was getting established, Miya began to discover fans of his work in Baltimore, Washington D.C., Philadelphia, New York City, San Francisco and in Europe. He started touring and tattooing in different cities which proved to be lucrative. Miya had an eye on a building in the Castleberry Hill area of Atlanta that he wanted to buy and renovate into a shop. Touring was the key to making his vision a reality. “That’s how we paid for City of Ink, traveling all over the place,” he says.

City of Ink opened seven years ago. Miya worked with Tuki Carter and Corey Davis to outfit the building and start building a brand. In addition to being a tattoo shop, City of Ink is an art gallery, with new shows every month. It is a priority for Miya to showcase other artists’ work. “When we opened up City of Ink, I didn’t ever want a young artist not to have anything to do,” he explains. “And I thought about Asheville. I know I’m not the only artist to come out of the projects in Asheville, but just imagine if they had opportunities, imagine if they had a chance. City of Ink is a real movement.”

Color Outside the Lines

This commitment to showcasing black tattoo artists led Miya to make Color Outside the Lines, a documentary about the history, struggles and triumphs of black tattoo artists, which came out last year. “I wanted to document these artists because you don’t know when one could leave this earth and their story would never be told.”

As Director Artemus Jenkins explains, Color Outside the Lines “is the first film of its kind; it’s a little-known piece of our history that can now live on forever.”

The documentary took several years to shoot, and includes interviews with black tattoo artists from across the country.
One of those is Jacci Gresham, who shattered barriers when she started tattooing professionally in New Orleans in the early 1970s. “When I was 18 years old and researching tattoo artists, she was the only one that was in the magazines,” says Miya. “She became one of my mentors from afar, I knew she was trying to teach people how to tattoo on black skin. She was an inspiration.”

COTL has been generating a buzz — it’s been highlighted in a number of publications including Juxtapoz, Complex Magazine and Urban Ink. Last fall it was a featured selection at the BronzeLens Film Festival. DVDs of the film will be available to purchase at the screening on Saturday. When asked about the impact of the film so far, Jenkins says “it has been opening the eyes of people to a severely under-documented culture. Even artists are learning more about something many of them have been doing for years.”

Miya’s acclaim continues to grow. He was recently interviewed by VICE, a popular international art and culture magazine from New York. The latest ASAP Rocky track, “1 Train,” has rapper Big K.R.I.T. (who has a tattoo from Miya) saying, “I’m more like Miya Bailey on you rap muthaf—kers, a true artist.”

This type of exposure does not go unnoticed in the community where he grew up, says Damion. “When black people see our own brethren in magazines, on television, and his name mentioned in music, and then see Miya strolling through the neighborhoods when he comes into town, his presence becomes inspiration in itself.”

This is part of what makes the screening of COTL in Asheville so significant.

Timmy Smith of New Asheville productions is the promoter for the March 16 event. “I’m proud of Miya,” Smith says. “Personally, I don’t know too many black males with Miya’s background who have left Asheville and gone on to become successful with pure art talent.” Beyond that, he says, “having this event is a way to showcase to the minorities in Asheville — that we can do anything we want to do.”

This message of possibility is one that Miya shares when he visits schools in Atlanta to talk to children about art through his “Inspire Your City” program. Miya has plans to start a similar program in Asheville. “I just want more people to have the same opportunities I did,” he says. “I can’t front, art helped me out. Art got my family out of situations, art got me out of the projects. I want to see more young people to understand that you don’t have to be a rapper or a ball player, you can actually be an artist.”

— Ami Worthen can be contacted at amiwhoa@gmail.com.

what: Red Carpet Screening of Color Outside the Lines, followed by DJ Doctor Awesome
where: Where: Club Tetrus at the Arcade, 130 College St.
when: Saturday, March 16, 9 p.m. (More info at 280-0586, @SocialLifeAvl)

Follow me @amiwhoa
View all posts by Ami Worthen →