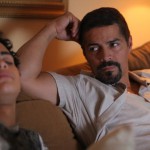 Gun Hill Road, set in the Bronx, is the story of a Latino father home from prison who has to come to terms with the fact that his son is transitioning to a woman. 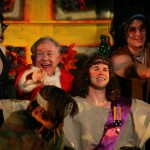 Mangus! is a dark comedy that follows a wheelchair-bound teen who wants the lead role in his high school’s production of "Jesus Christ Spectacular."

According to Robert Gaston, a filmmaker and the organizer of Asheville's first-ever LGBTQ film festival, QFest, there are certain programming rules for the opening feature. "You never open with a documentary, or a lesbian feature, or a foreign-language film," says Gaston. These are not written-in-stone statutes, and Gaston (with partner Michael Sheldon) quickly broke one by opening with lesbian musical comedy Jamie and Jessie Are Not Together.

"Jamie and Jessie is filmed Chicago, but the energy of the movie and the locations it uses — this is an Asheville film," says local actor Sheldon (who most recently starred in NC Stage's Hedwig and the Angry Inch). It's sweet and a little edgy. It has heart. And song and dance.

The rest of Asheville QFest's film selections are no less surprising. Or refreshing. Or challenging. There's Gun Hill Road, which Gaston says will be in high demand. The drama, set in the Bronx, takes place around a father returning from prison who has to learn how to relate to his son, who is planning to have gender reassignment surgery. On a lighter note, What's the Name of the Dame showcases some of New York City's top drag queens performing ABBA songs. Wish Me Away is a documentary about the coming-out story of country singer Chely Wright. "It really speaks to gay pride," says Gaston. Comedy eCupid is about a man whose job is going nowhere and his relationship is stale, so he downloads a relationship app, which takes over his entire life. (Bonus: The film has Morgan Fairchild as a prophetic waitress.) Festival-closer, German film Romeos, is the story about a young female-to-male transsexual who becomes attracted to a flirty, attractive gay man.

Hairspray (38 North French Broad Ave.)
Pre-party on Friday, Sept. 30 with a drag king and queen show. A portion of the proceeds go to Blue Ridge Pride.

QFest already takes place in Philadelphia, and a similar festival is in the works for London. Sheldon says that most major cities have their own LGBTQ film event, and there's been talk for years of bringing one to Asheville. But lining up the inaugural film fest was a special challenge for the organizers.

"One of things that's most exciting about bringing this to Asheville is that the audience is not typical America," says Gaston.

Sheldon adds, "I don't think it's even typical LGBT America."

"We wanted to make it about what's new and fresh, and tailor it to Asheville," says Gaston. The organizers screened hundreds of films, and also took the suggestions of Philadelphia QFest's artistic director Ray Murray.

"We want to have something for everyone," says Gaston. "We want films that will appeal to all audiences, while still celebrating the key demographic."

This year's festival includes eight first-time directors, "And they're different stories from what gay films have been in the past," says Sheldon. "It's a new generation coming up." Some of those stories really push social boundaries — Gun Hill Road, which focuses on a Latino family, is one example. Another is Circumstance, about two women in Tehran whose lifelong friendship has become romantic. When one woman's brother turns toward Islamic fundamentalism, their relationship is threatened. And then there's This Is What Love In Action Looks Like, a documentary about what happens when a 16-year-old blogs that he doesn't want to be sent to a Christian program geared toward turning gay teens straight, and a group of teens come to his rescue.

And there's this: "You hear it's an LGBTQ festival, but the 'B' always seems to get left out," says Sheldon. (The B is for bisexual.) "3 is a very bi-positive movie." The German comedy, by the director of Run Lola Run, tells of married couple Hanna and Simon who both begin an affair (unbeknownst to each other) with Adam. "Beyond the bisexual aspect of it, it makes us question our intimate relationships and boundaries," says Gaston. "It examines these people in a beautiful way."

Beyond the films, there are also after-parties each night (see schedule) and a panel discussion scheduled for Sunday. A number of the filmmakers and actors will be visiting Asheville for both QFest and Blue Ridge Pride. That — LGBTQ-oriented visitors — is a trend that both Sheldon and Gaston hope that QFest will increase. "It's big fun, it's a celebration," says Sheldon. "We hope to make this even more of a destination for the LGBTQ traveler."