Asheville received an infusion of color and culture Oct. 20-23, as the Intertribal Graffiti Jam brought artists to town from across the U.S., representing 10 Indigenous nations.

The event is part of the Indigenous Walls Project founded in April by Asheville-based Jared Wheatley, a dual citizen of the Cherokee Nation and the U.S. The project’s goals are centered on reclaiming visibility, space and social dialogue with Indigenous artists and culture. Though previous murals have been created on downtown walls donated by local businessman David Moritz and others, the October Jam was by far the project’s biggest event yet. The weekend gathering resulted in seven walls painted at six locations on the land of the Anigiduwagi, more commonly known as the Cherokee.

“It’s an honor for myself to be able to harness the energy of these artists and their skills, and get them to concentrate in such a small area,” Wheatley says. He adds that, due to relocation, the bulk of Indian country rests west of the Mississippi River. With this in mind, Wheatley hopes to help turn Asheville into the East Coast’s center for conversation around contemporary Indigenous issues and culture.

With many of the murals in prominent locations around the city, Wheatley says that there’s now “a native gateway to enter Asheville” from the city’s northern (109 and 95 Broadway), southern (224 S. Coxe Ave.) and western (405 Haywood Road) parts of town. Once an appropriate wall is secured and painted in East Asheville, he feels it will offer a powerful statement of inclusivity on Native land.

“That’s kind of our symbol to every Native entering Asheville — that it’s a loving and caring community where their Indigeneity is welcome,” he says. “That’s why the event is important — not only to have such visible spaces but also a component of the intertribal nature whereby all Indigenous people feel like they can step up, say who they are, freely speak their language and exude their culture.”

Helping Wheatley and the artists over the weekend were marketer and photographer Sarah Hoski; Wheatley’s mother, Brenda Lee Whitmire; The Hop co-owner Greg Garrison; and Wheatley’s children, Alexis and Ezekiel.

Visiting Asheville from Phoenix, artist Breeze (a member of the Tohono O’odham nation) notes that all of his fellow participating muralists either already knew or knew of one another but that the weekend still provided plenty of opportunities for connections. 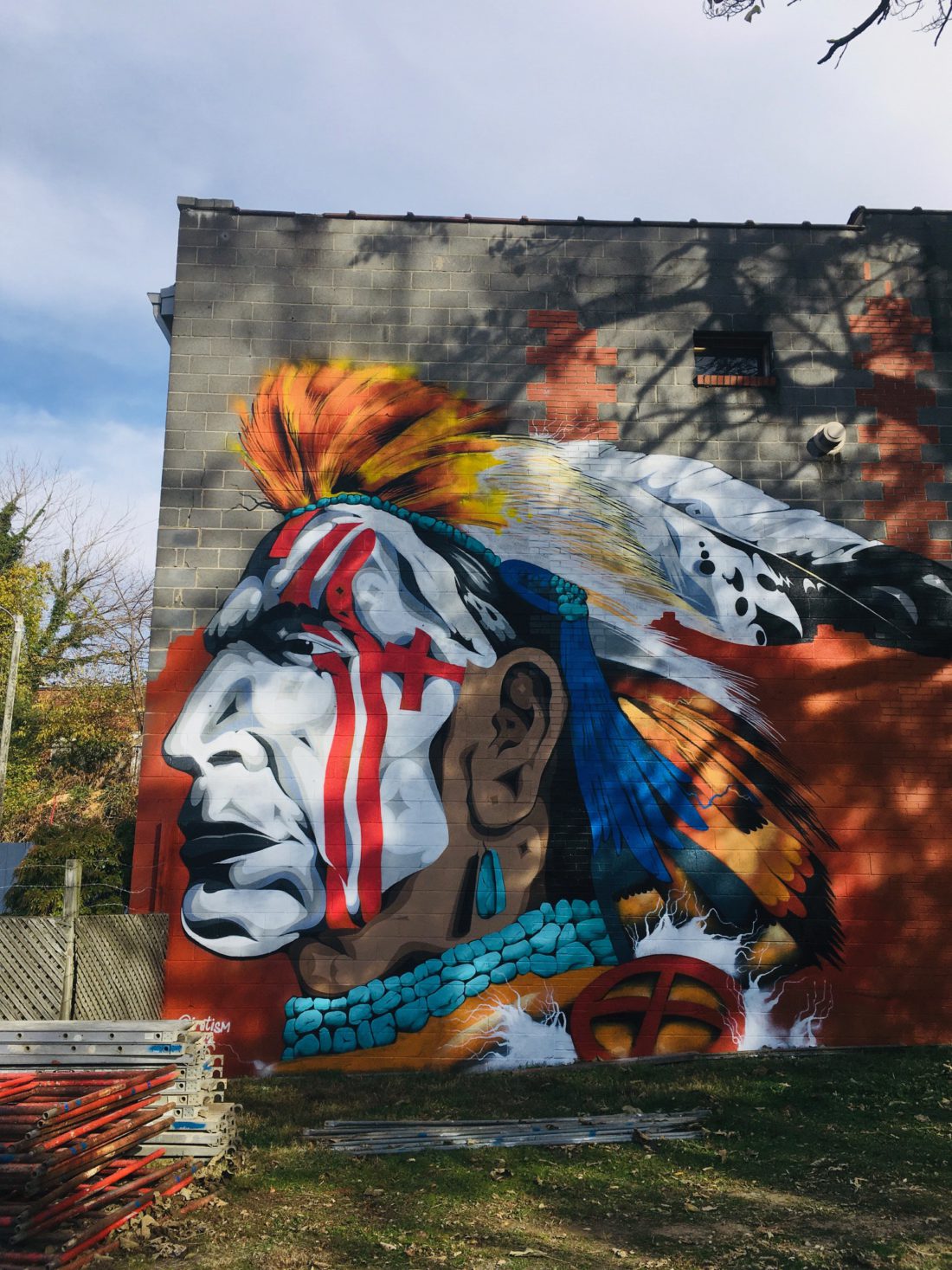 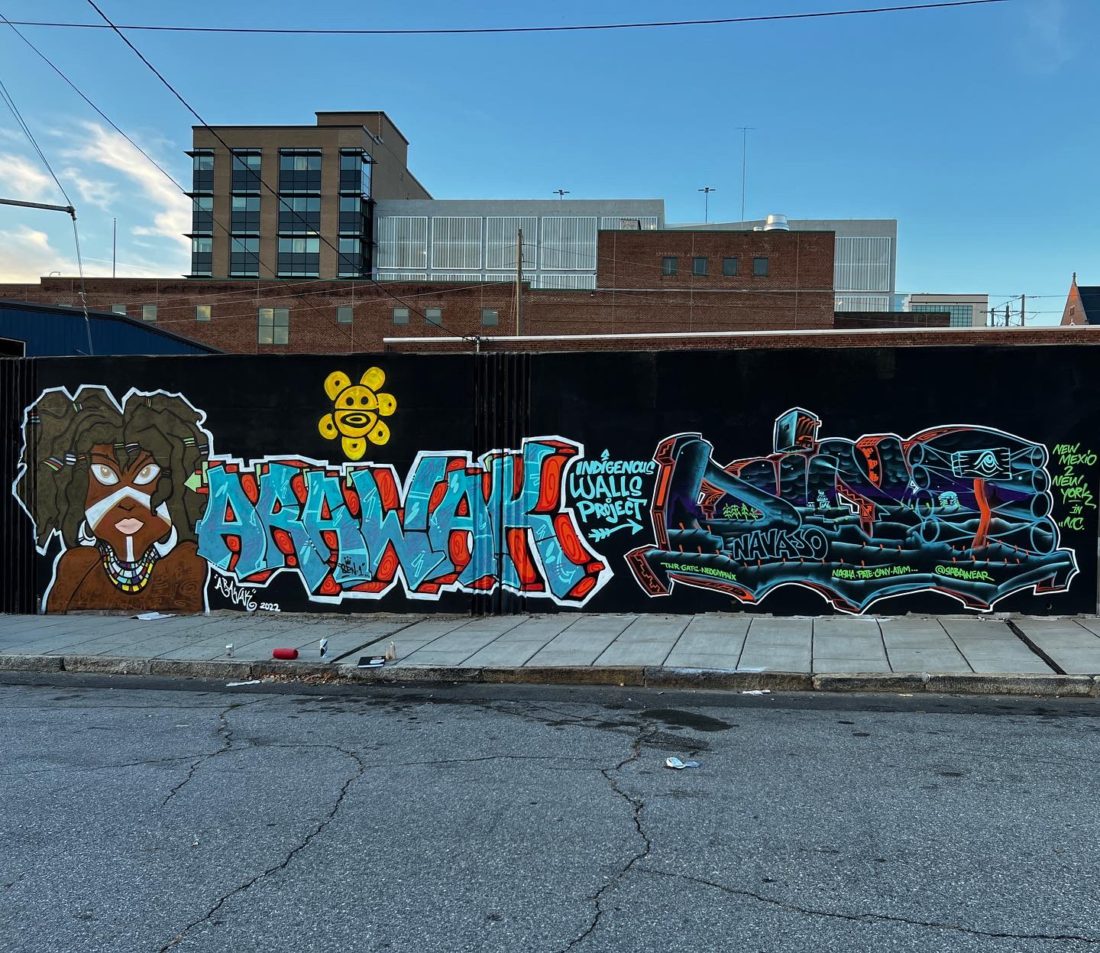 Before the event, Breeze researched Cherokee narratives to inform his two collaborative murals with Los Angeles-based artist Vyal (a member of the Zuni nation). In turn, the pair painted a colorful buzzard for the wall at 46 Millard Ave., as a nod to the mountain creation story. Meanwhile, their work at 95 Broadway features eight eyes, an ember inside a vessel and intricate, weblike patterns to represent the spider at the core of the fire creation story.

Breeze notes that he and Vyal also met members of the Eastern Band of Cherokee Indians over the weekend. Following their initial introduction, the two muralists accepted an invitation to visit the Qualla Boundary and tour the surrounding mountains.

“That was the high point for both of us because it was actually engaging with that community,” Breeze says. “Just to put it bluntly, it’s a lot of white people in Asheville and hardly any Native people — and that’s their original homeland. So, to go off on our own and have that conversation and interact with those tribal members and that family, I think that made it more meaningful.”

While Breeze and Vyal proved that fostering such connections is possible, Wheatley sees greater challenges in the overall process of what natives call “remembering” traditions. In his talks with Cherokee elders, he’s come to understand how difficult it will be to achieve his goals of bridging Indigenous youths to their ancestors’ ways and establishing a cultural center for all Indigenous people living in or visiting Asheville — but it’s a quest he accepts.

“I really realized that the [Indigenous Walls] project and having an urban Indian center here in Asheville are big enough missions that they really should be the cornerstone of my life’s work,” Wheatley says. “It’s going to take that level of commitment to bring not just my kids back into our Indigenous, spiritual ways of living and perspective, but also the people around them.”