Occasionally thinking out of the box means getting into a different one altogether. Such is the case and the driving force behind MFA BFA RAD, a pop-up exhibition of new works by 18 Western Carolina University BFA and MFA students currently. It’s briefly on view at The Tannery, a studio and gallery space off of Old Lyman Street in the River Arts District.

The exhibition, which opened Friday, April 25, is up through this Friday, May 2. It was organized independently of the WCU art program and co-curated by MFA candidates Tonya Anderson and Laura Sellers. Its featured works offer a cross section of the department’s breadth. Offerings include ethereal displays and recreated space. They suspend time and draw on themes of simulation and temporality.

The show sprawls through The Tannery’s two expansive hallways and into no less then a half-dozen of the building’s 16 studios. Wood-fired stoneware and blown-glass sculptures stand freely beside digital and hand-printed photographs, oil paintings and watercolors. Several mixed-media installations fill studios temporarily left vacant because of this year’s excessively harsh winter. 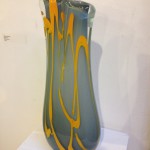 Glass piece by by Cole Johnson 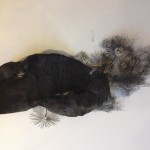 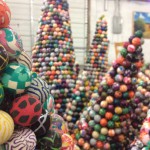 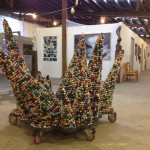 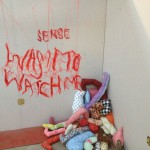 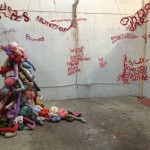 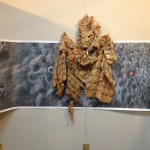 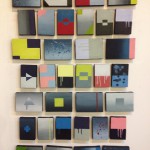 A photo installation by Dennis Calloway lines an entire wall. The work features several dozen photographs in offset and alternating rows and columns. They geometrically fragment two views of a parking deck as seen at night, brightly lit by hot-white street lights, in a surreal episode that suspends time and place.

A series of small oil and acrylic studies by Laura Sellers forms a grid that plays with Josef Albers-based color theory. They’re dwarfed beside her nearly five-foot-wide landscape paintings.

Nearby, three mixed-media wall pieces by Renee Roberson mimic large broaches. Thick black fabric rolls down the wall in one. On its side are a group of scorched wires that have been soldered together in the shape of stars or flowers. With a mid-century modern style, they sparkle and dot the wall just below the piece’s lower right edge. Another work, this one made of pearlescent white fabric, looks like a beret or squashed pill-box hat. As with the black sculpture, wires and steel fanning out from the base, mixing the soft delicacy of the cloth with the brashness of the metal.

In the middle of the room rests a sculpture by Cole Johnson built entirely of rubber bouncy balls — the kind you get from 25 cent machines at the grocery store. Thousands of them form individual cones that stretch upwards of three feet from the steel base, forming an off-kilter crown of sorts. Or a simulated explosion momentarily put on pause.

But it’s the in-studio installations that make the best use of the space and The Tannery’s open embrace of unencumbered experimentation. A fiber installation by Hannah Rebecca McBride offers a grim and eerie view into a potential domestic nightmare. Two piles of sewn pillows lie in the room — one in the right interior corner, the other against the wall towards the back left. The pillows, though, look like dismembered dolls or stuffed animals. Legs and arms and abdomens are piled high upon one another. Above them, unseen fishing lines are anchored to the walls, creating an invisible web from waist to head height. From this web hang various words and phrases written in red sewing thread: “Promises,” “Sense,” “Just wishing we could see.”

In Tonya Anderson’s “eyeseeyouseemeseeyou,” an entire studio space is filled with hundreds of printed woodcut eyeballs. The thick, goopy lids and cold, lifeless irises and pupils are at first overwhelming. But they eventually rescind into still lifelessness and return the viewer to solitude.

Leigh Anne Parrish’s “Teatime” features a video installation and interactive relics that draw from connective wells of memory and family trips. A dingy brown cloak made from tea bags is hung on one wall, perched on top of a panoramic image of a seascape and ocean floor. A pile of spent tea leaves and dust has fallen below. The video, though, reveals the artist donning the cloak and walking into the ocean, where it immediately begins to fall to pieces before arriving at its current, dried-out state.

Anderson and Sellers found The Tannery while exploring possible RAD locations for the show. “We were trying to look for somewhere outside of campus, a step outside of Cullowhee,” Anderson says. “we wanted to reach out to the Asheville arts community.” The Tannery, which takes its name from a previous and decades-old usage, is part of Switchyard Studios. The mural- and graffiti-covered outcropping of buildings is tucked in between Riverview Station and the railroad tracks at the south end of the RAD.

The studios are still new to the neighborhood, having only been open since late 2012, and share little in common with their polished and better known sister-sector at the RAD’s north end. But what The Tannery lacks in age, and polish for that matter, it more than makes up in its experimentally engaging atmosphere. The building is drafty and lined with patchy partition walls, plywood doors and string lights hanging over two hallways and white-walled studios. This, and the artistic openness of both the facility and its manager, Asheville artist Jeremy Russell, became the primary draw for this show.

MFA BFA RAD is on display through Friday, May 2. Viewing hours are available by appointment and on Friday from 10 a.m. to 5 p.m. For more information, contact Anderson at ovicote@yahoo.com.