I’m not a fan of the whole “killing it” thing, but rarely has there been a more apt usage of the term than at the end of Beck‘s show at the Thomas Wolfe Auditorium. Following the searing, sweat-drenching, absolute mayhem of the seven-piece band’s performance of “E-Pro,” Beck literally wrapped the stage in crime scene tape. It was thoroughly killed.

But really, from the opening notes of the first song — they launched with “Devil’s Haircut” and a retina-scorching backdrop of lights and geometric shapes — it was clear the band meant business. (Even AC Entertainment’s Ashley Capps tweeted that Beck’s Asheville show was “super high energy and off the hook.”)

The band members (the same group who worked on both Beck’s most recent album, Morning Phase, and 2002’s Sea Change) bounced off each other, musically and physically, while the front man executed an exuberant Russian-meets-African folk dance hybrid, his moves sometimes Michael Jackson crisp, sometimes a Mick Jagger strut. The dancing, if surprising, was a good sign: Not too long ago Beck was sidelined by a spinal chord injury (sustained while making a video for “E-Pro” — perhaps part of the reason for getting homicidal with that song).

But for all the swagger and insouciance of “Gamma Ray” and “Hell Yes,” there were also fluid transitions into Beck’s more introspective songs. “Blue Moon” and “Lost Cause” were performed stand-and-deliver style; the latter especially impressive because it’s such an intimate song, and yet somehow expanded to fit the vastness of the auditorium. The most stunning of the slow songs was “Wave,” from Morning Phase. Orchestral and dark, with bowed standup bass, it veered about as far as possible from bouncy hits like “Loser.” 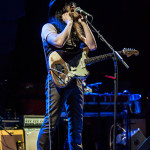 The Ghost of a Saber Tooth Tiger (Sean Lennon), photo by David Simchock 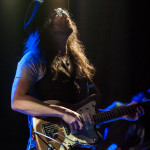 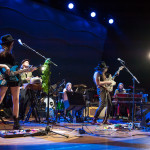 The Ghost of a Saber Tooth Tiger, photo by David Simchock 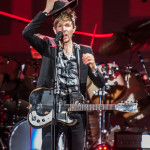 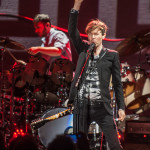 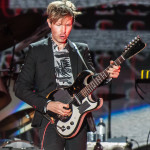 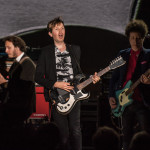 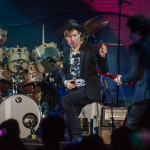 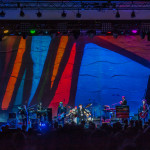 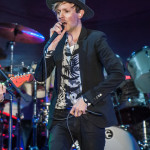 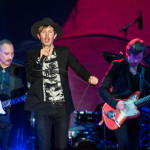 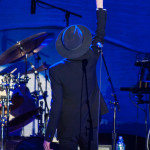 If nothing else, the show served as a sort of revue of Beck’s catalog and its almost schizophrenic zig-zag through genres. (Onstage, he even morphed “Sissyneck” into Michael Jackson’s “Billy Jean.”) Jazz-tinged hip-hop, indie-rock, country-rock — it’s rare than an artist can take those kinds of risks and put out such a range of experimental albums and still maintain a crowd that not only comes along for the ride but doesn’t even hesitate to take up call-and-response duties on “Loser,” one of the most lyrically odd songs of all time.

The eccentricity of Asheville was not lost on Beck, who said from the stage, “We were walking through the town and there’s people playing banjos and there’s DJs and there’s God knows what going on.” Appropriately, there was a banjo solo on “Sexx Laws,” the first of a three-song encore.

The encore only got wilder from there. In the soulful throws of “Debra,” (personalized with all sort of Asheville references) Sean Lennon — in a crazy hat — came on stage and draped Beck, James Brown style, in a mantle. It was Lennon’s band, The Ghost of a Saber Tooth Tiger, that opened the evening. That band, a pyschedelic six-piece in long hair and wide-brimmed hats, seemed to polarize the audience. Dreamy and dark, their sound twinged and pulsed like a wasp sting. They made excellent use of background vocals and dynamics, pulling back into quiet before muscling cool melodies over thrumming bass and percussion. TGOASTT’s short set included a “Nature Boy”-esque version of  Bobby Darin’s “Golden Earring.”

Lennon remained onstage, playing cowbell through “Where It’s At.” That song pretty much introduced Beck to the world 18 years ago and still makes for both a perfect calling card and an exclamation point at the end of an incredible show.