If biggest equals best, the Great American Beer Festival is tops among beer events in the nation. The GABF is the largest collection of U.S. beers served in a public tasting event and is attended by about 60,000 people who come to sample the more than 3,500 beers available, says the Brewers Association, which hosts the event.

This year’s GABF featured 92 competitive categories highlighting 145 beer styles with entries from more than 1,550 breweries from all 50 states and Washington D.C. — a 20 percent increase in participation over last year’s festival. Some WNC breweries took part in the competitions with two bringing home awards. Fonta Flora claimed a gold medal in the Field Beer category with its Beets, Rhymes and Life saison. Wicked Weed also won bragging rights, earning a silver medal against more than 350 competitors from across the nation in the most heavily entered category — American-style India pale ale.

“In the past, people have always thought of the East Coast IPAs as being these sweeter, maltier, hoppier beers,” says Dickinson. “We’ve veered away from that and decided to go down the route of creating a beer where you don’t notice the alcohol in it because it finishes so clean. The bitterness maybe isn’t quite as high as you’ll find on the West Coast IPAs, but the hop flavor is really what we’re focusing on, and that’s what to me an IPA is all about. It’s all about getting that hop flavor and aroma, not so much the just the intense bitterness on the tongue. They’re huge hop bombs.”

“I think every brewer, regardless of where you’re located, benefits from the competition,” says Joe Rowland, owner of Nantahala Brewing and president of the Asheville Brewers Alliance. “It encourages us to continue to make high-quality products and helps to drive innovation. Plus it’s just fun. With the number of brewers entering the competition skyrocketing, it’s a tough competition. So, even if you don’t bring home a medal, it’s great to see our North Carolina and Southeast neighbors snag a few.”

But the GABF isn’t just about going toe to toe for medals — the festival also offers three days of workshops, tastings, food pairings and social opportunities as well as hundreds of satellite events held in conjunction with the festival throughout the city. Joanna Postlethwaite of Thirsty Monk, who participated in a draft quality-management workshop, says the educational opportunity was “eye opening.” Along with classes, Postlethwaite says the chance to explore beers that are ordinarily unavailable in the Asheville area and learn more about the industry make the trip to the festival worthwhile.

Meanwhile, Rowland agrees there are plenty of reasons for Asheville brewers to make the trek west for the GABF. Along with the exposure to other brewers and craft beer fans and an opportunity to show others in the industry what Asheville is doing, Rowland says another motivation for attending is “the opportunity to see our West Coast friends. … There’s no other event that showcases so many brewers. It’s like going to the largest art gallery in the world and getting a chance to experience art from every corner of the world in one place at one time. Each year, we find inspiration from tasting many of the beers that we’d [normally] never get a chance to taste”.

When asked what he gets out of the GABF personally, he says, “I’ve gotten a great deal of advice from those who have been competing and judging GABF for many more years than we have, and I think the best advice I’ve gotten is to keep the competition in perspective. If you make bright, exciting beer, and you sell all of it and then some, that’s what’s important. Winning a medal is icing on the cake.”

Following is a photo gallery from the Great American Beer Festival by Tim Reese: 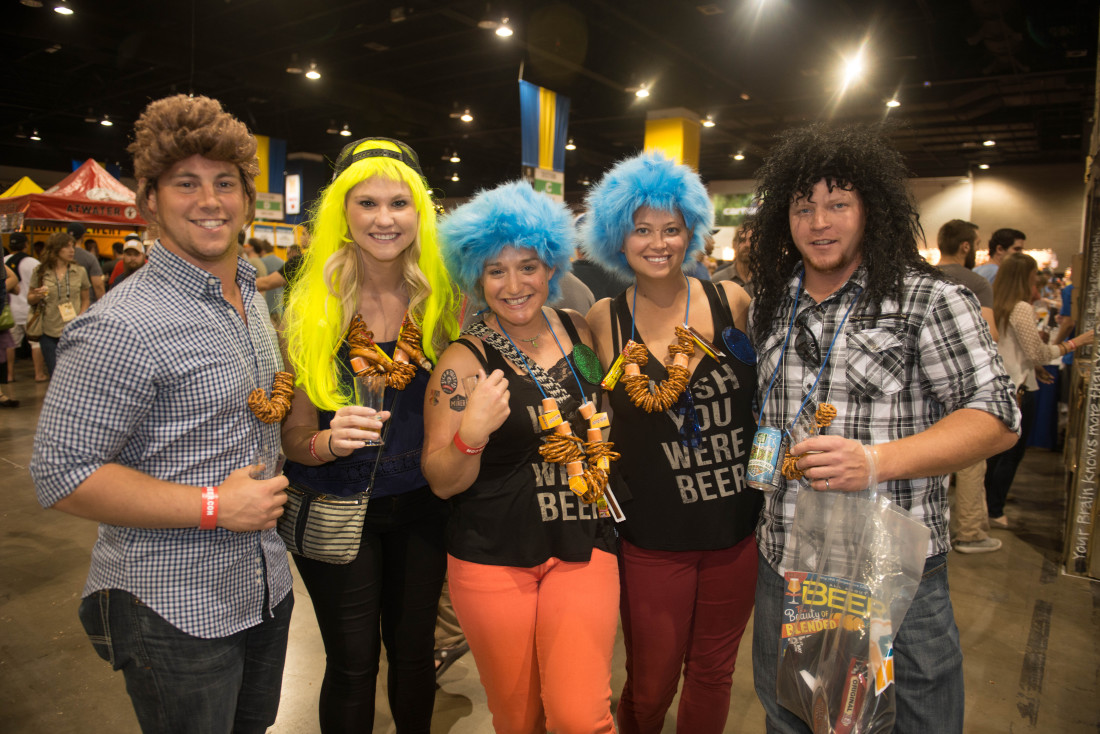 Beer is better with great hair. 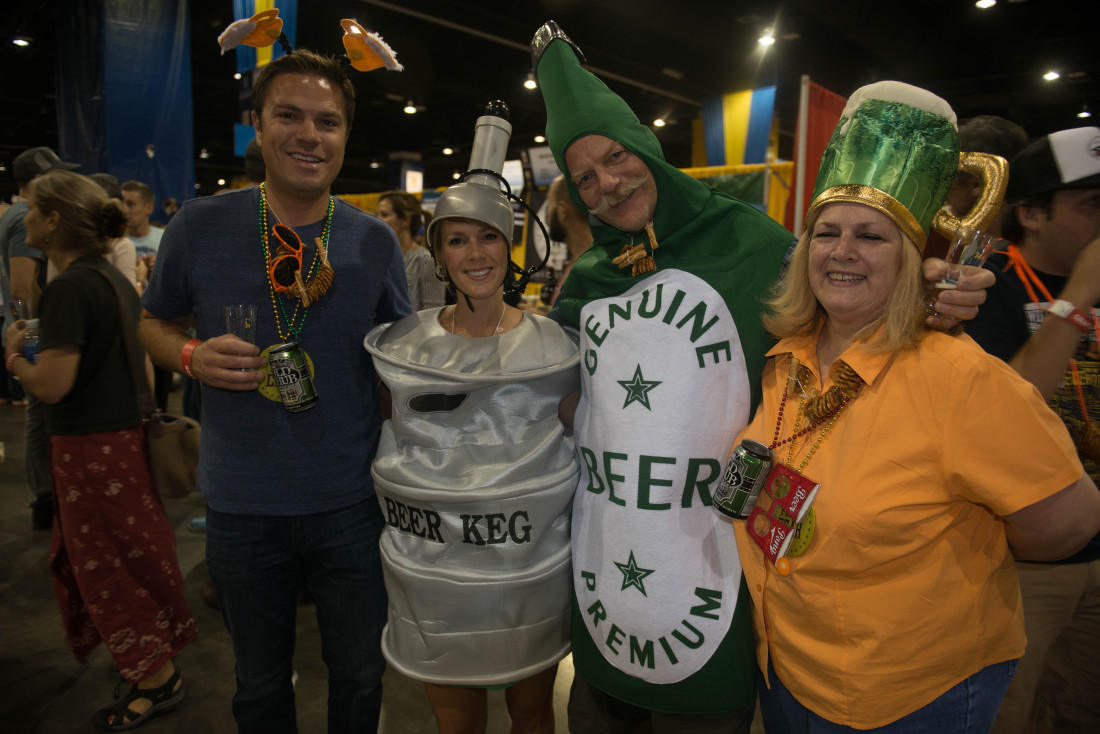 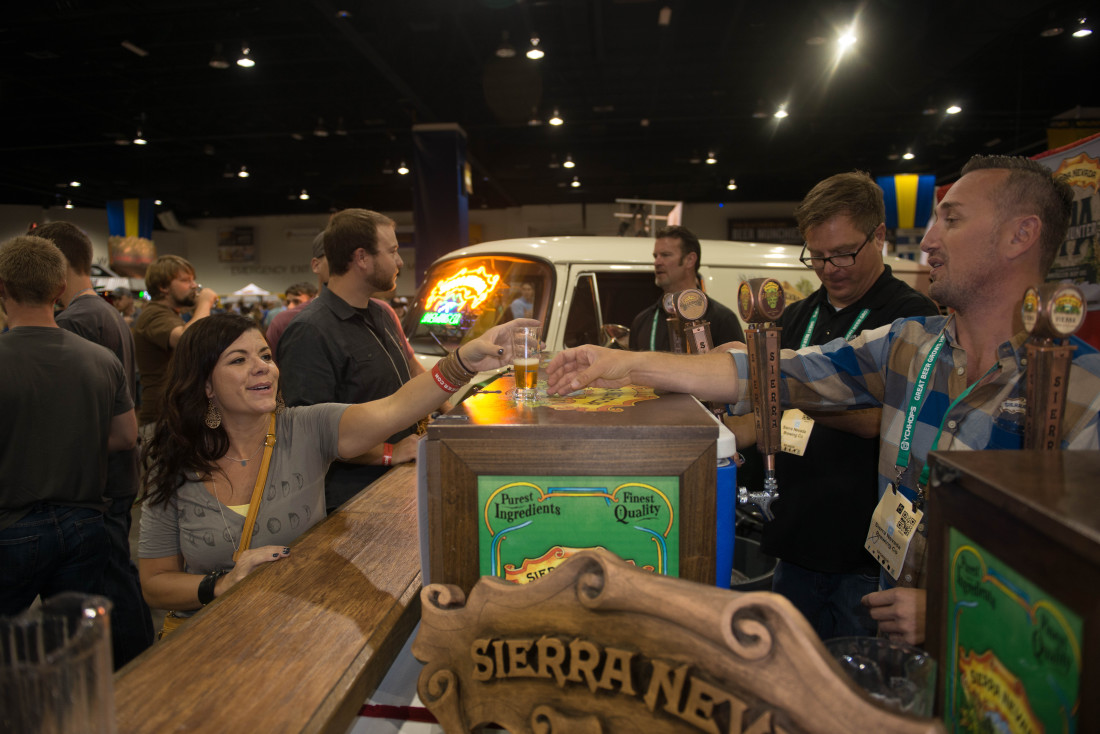 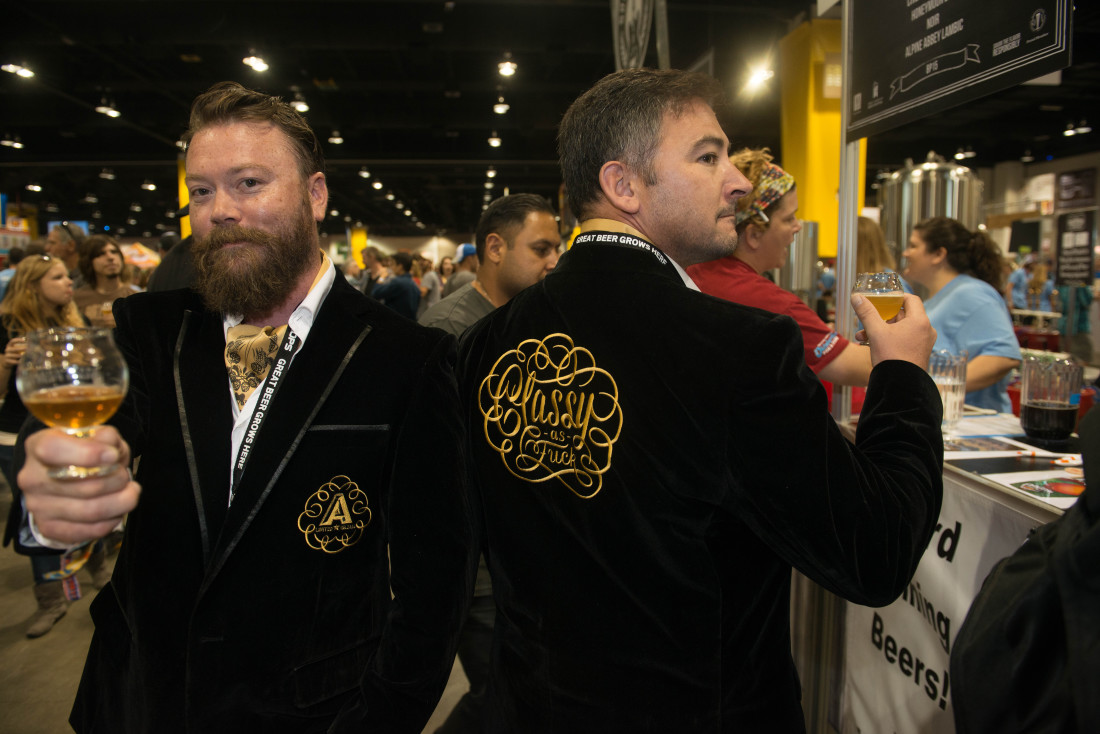 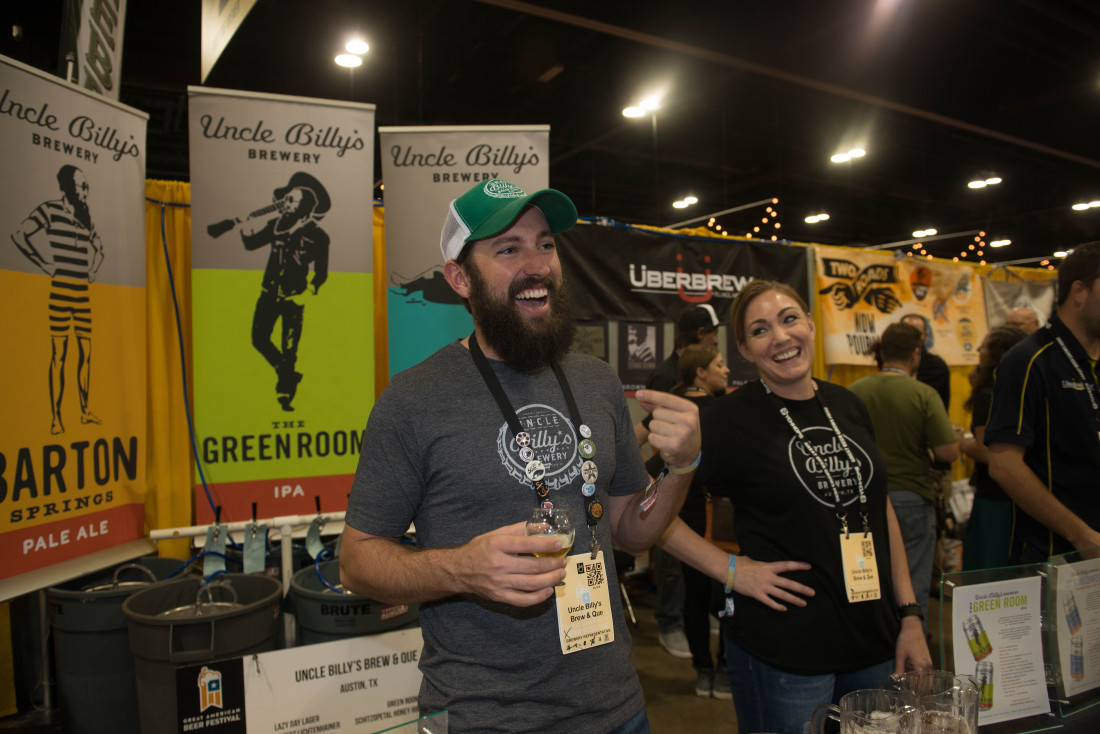 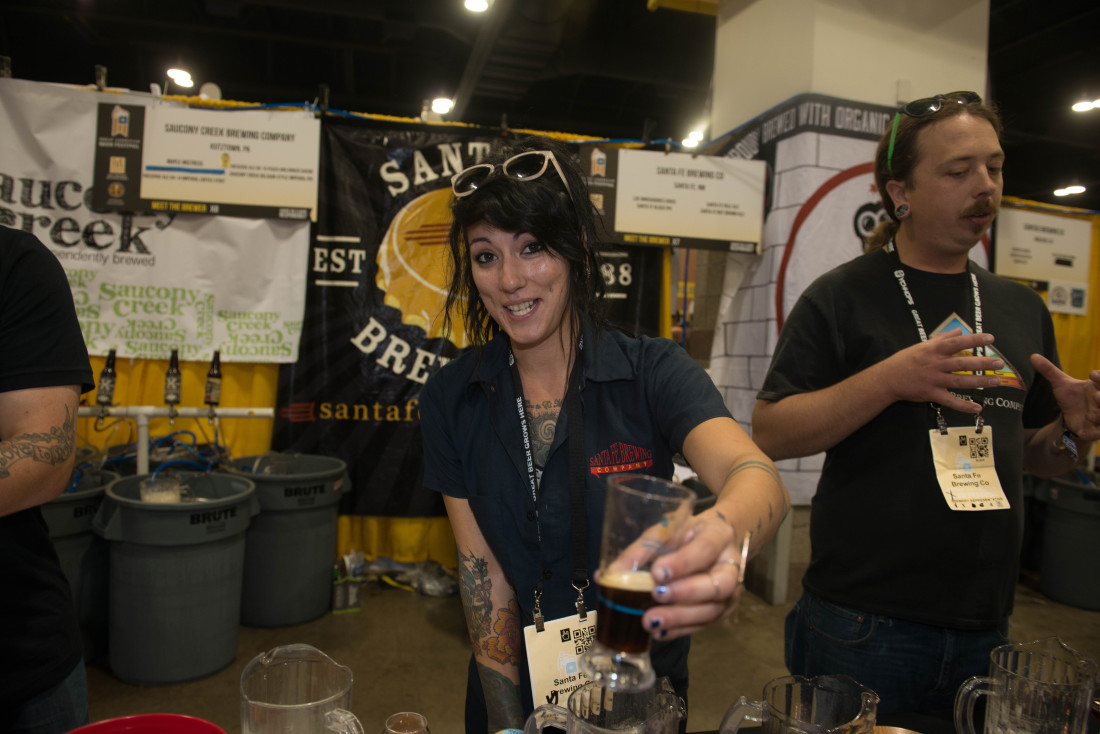 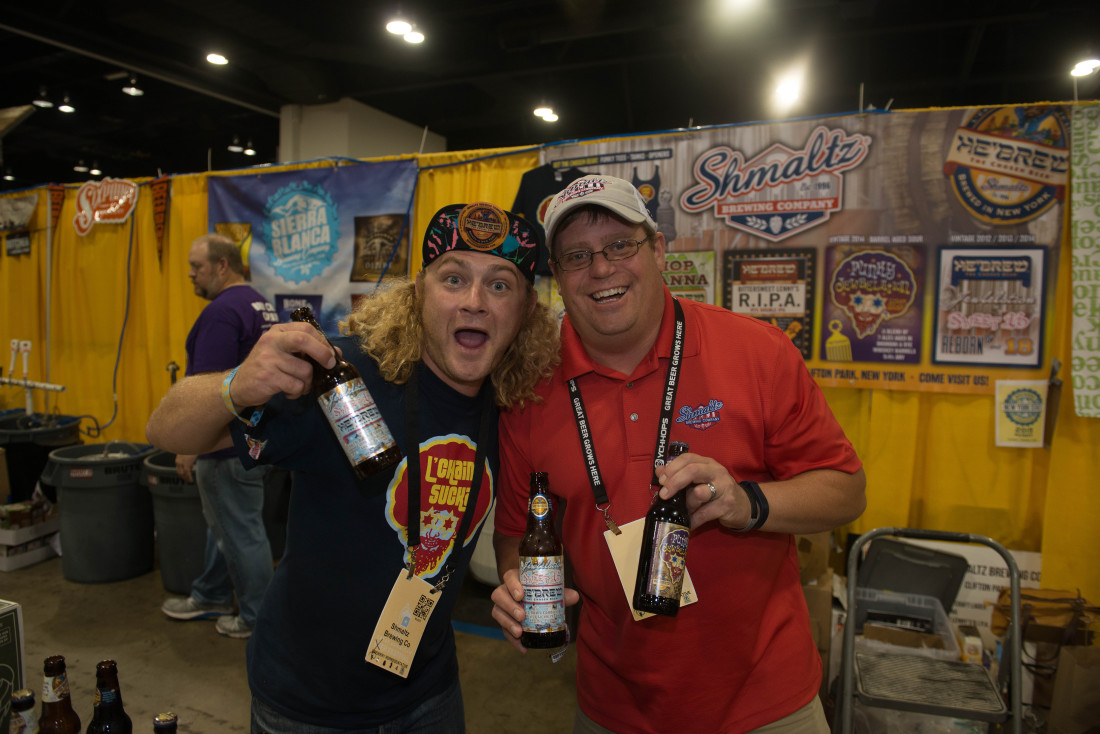 Who doesn’t need a little schmaltz? 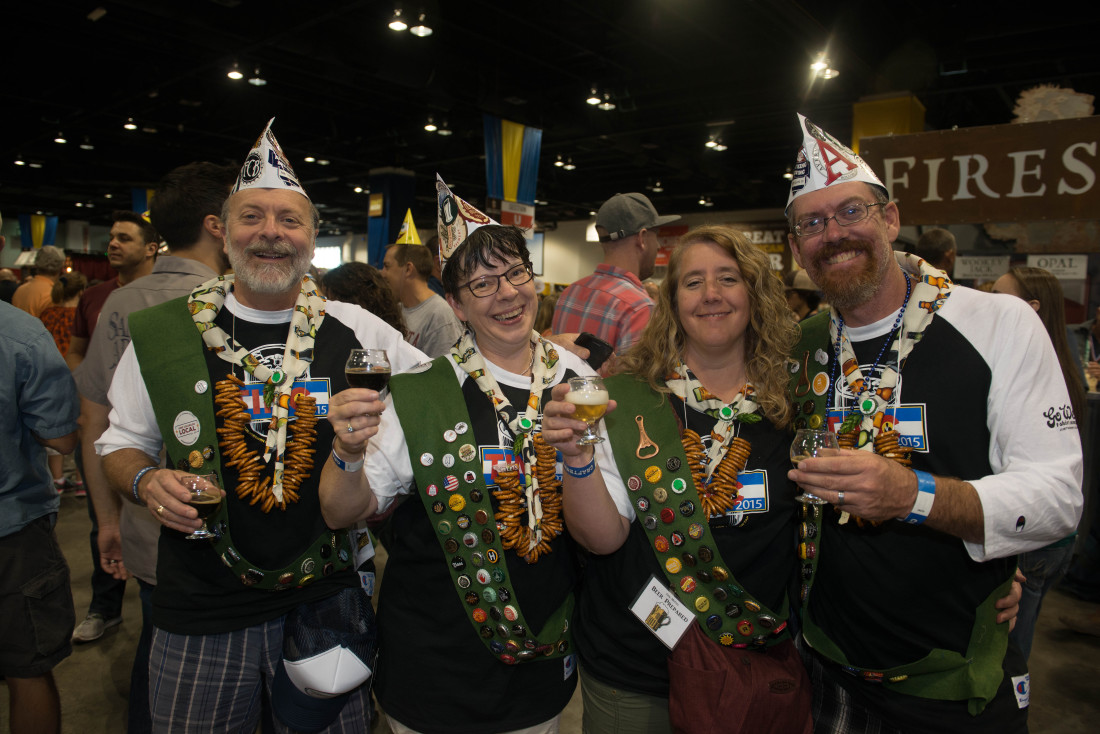 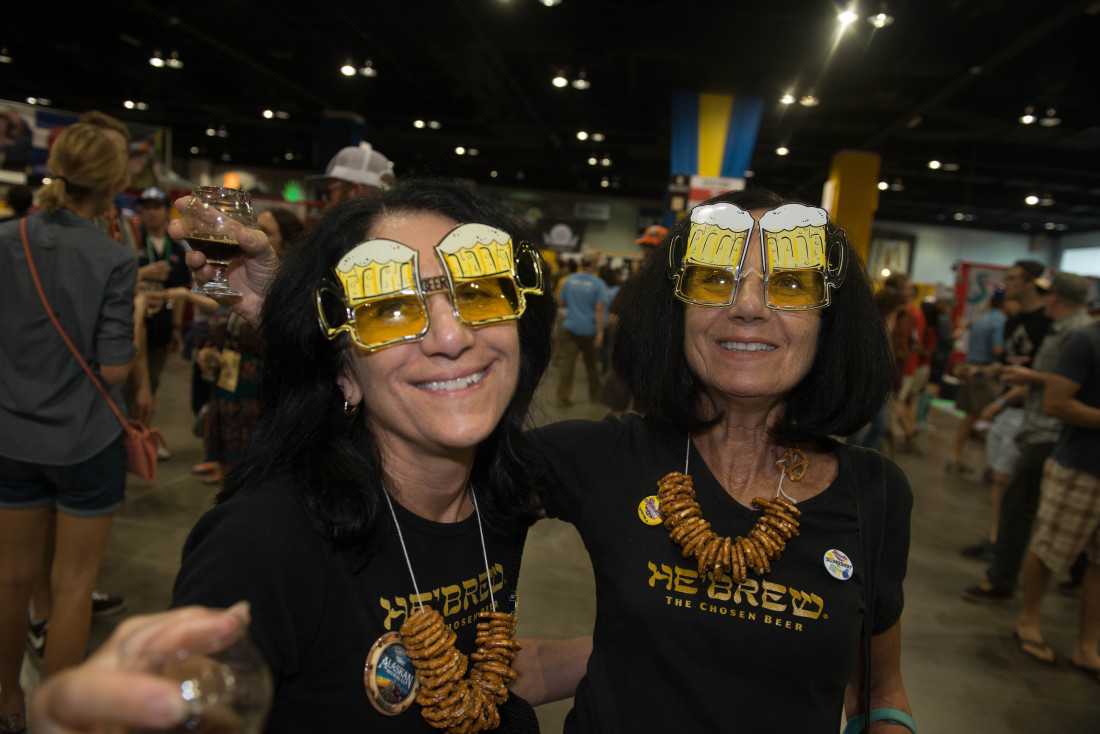 Can you see me now? 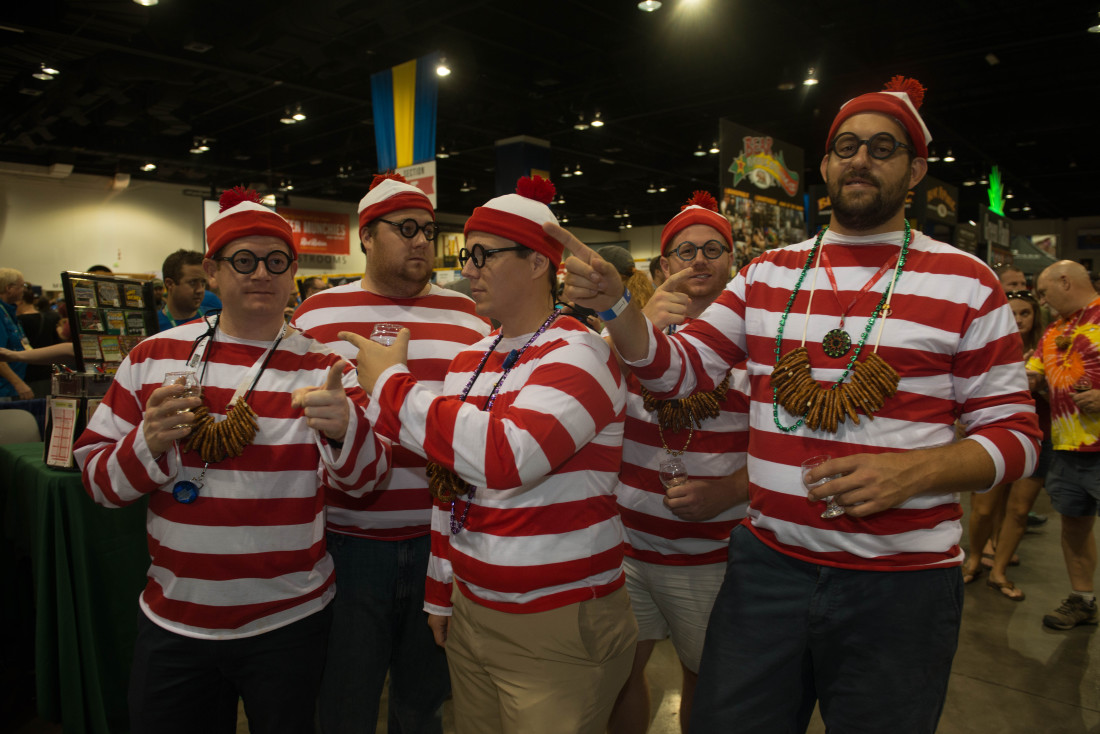 Which way did he go? 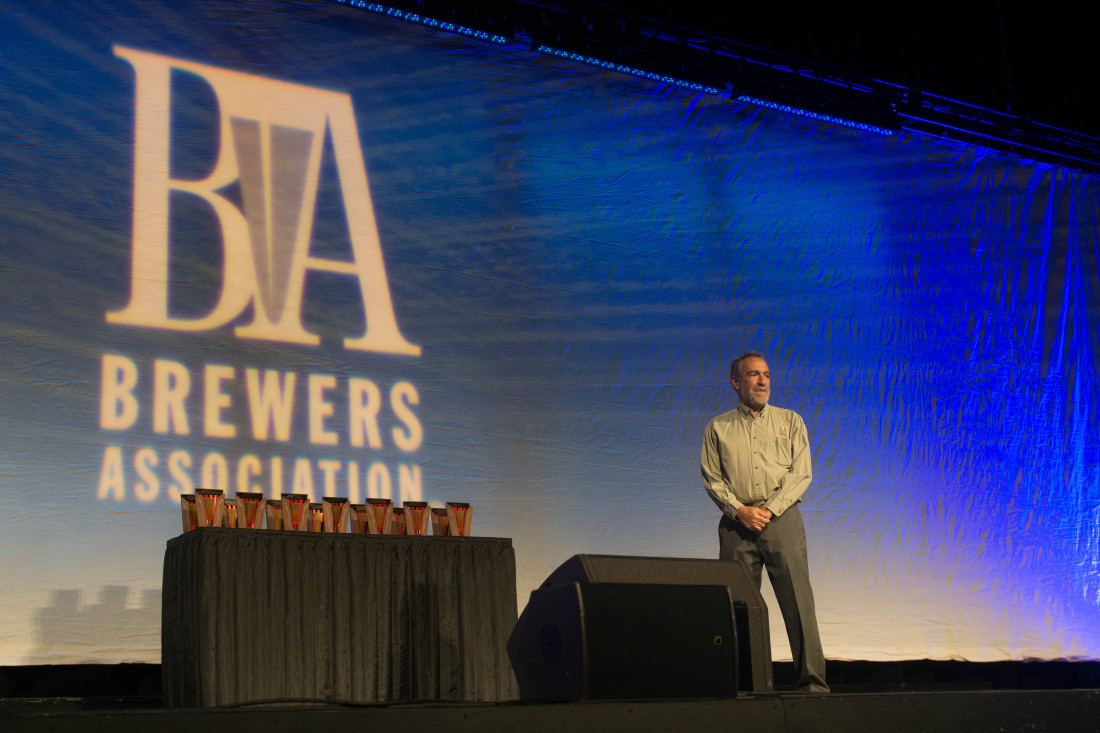 Charlie Papazian. the man who started the GABF. 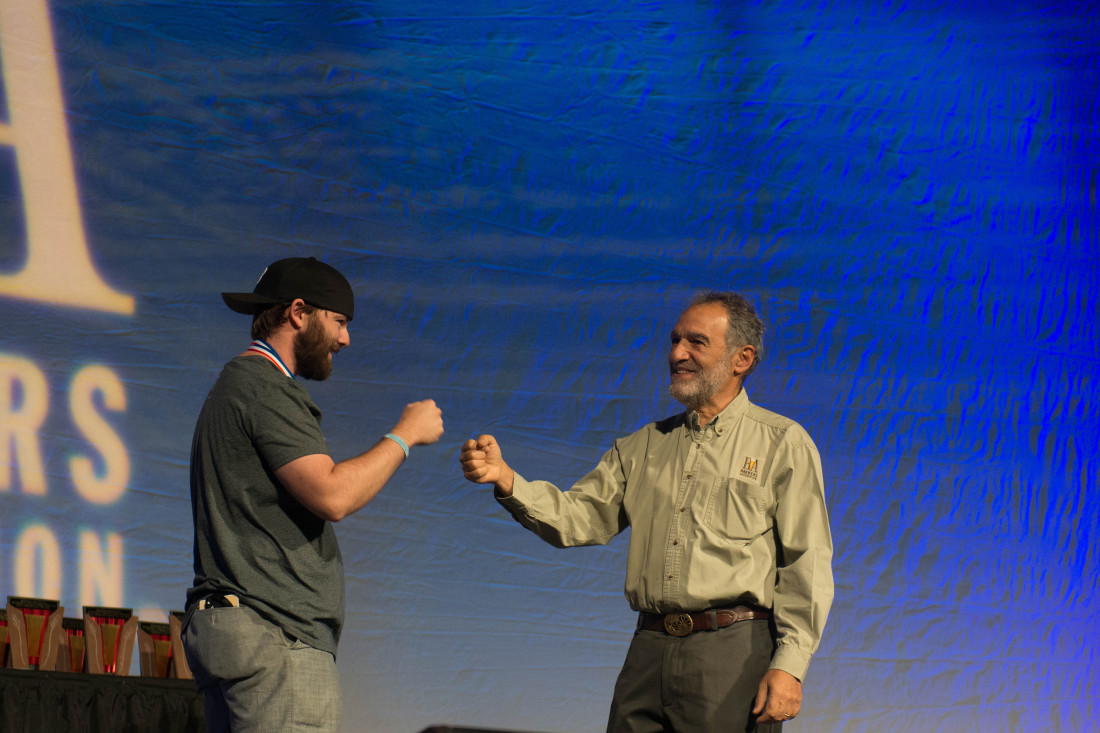 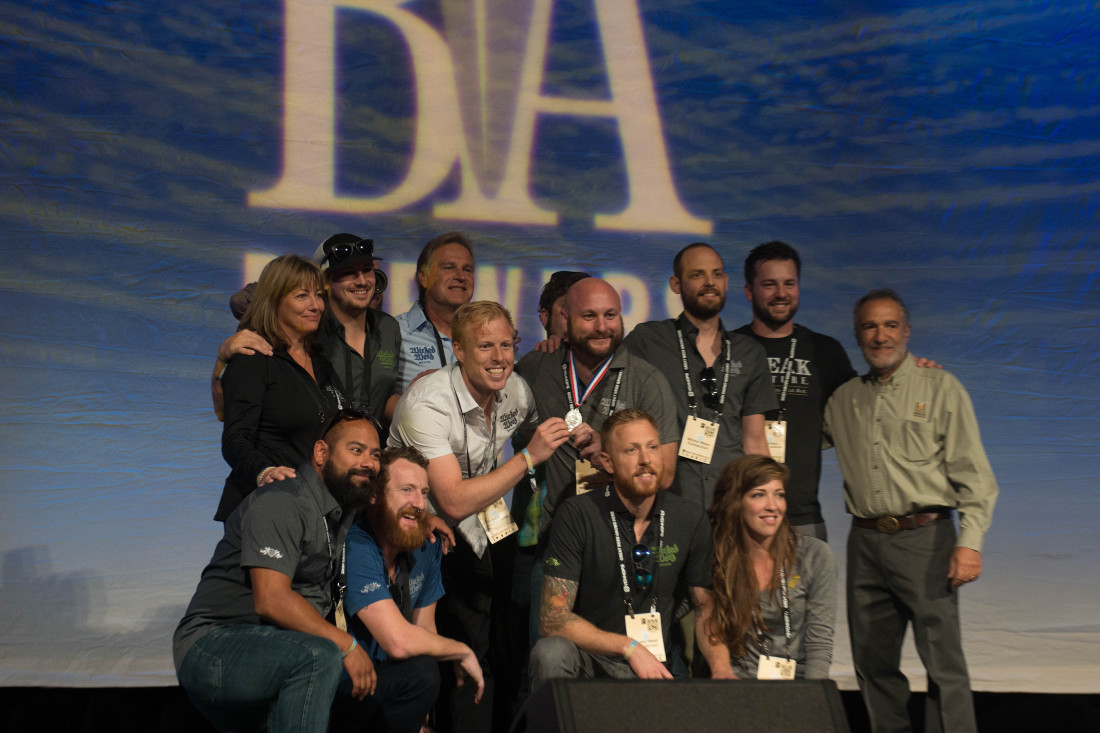 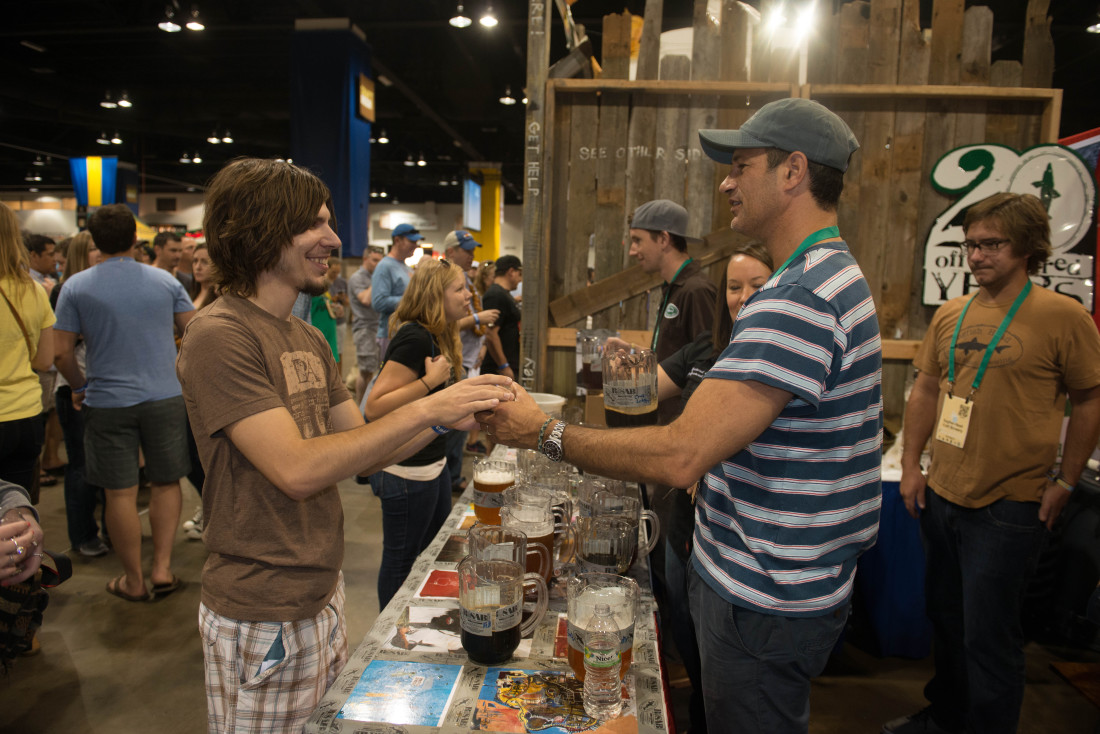 Sam Calagione of Dogfish Head lost his voice, but still poured and offered high-fives to all. 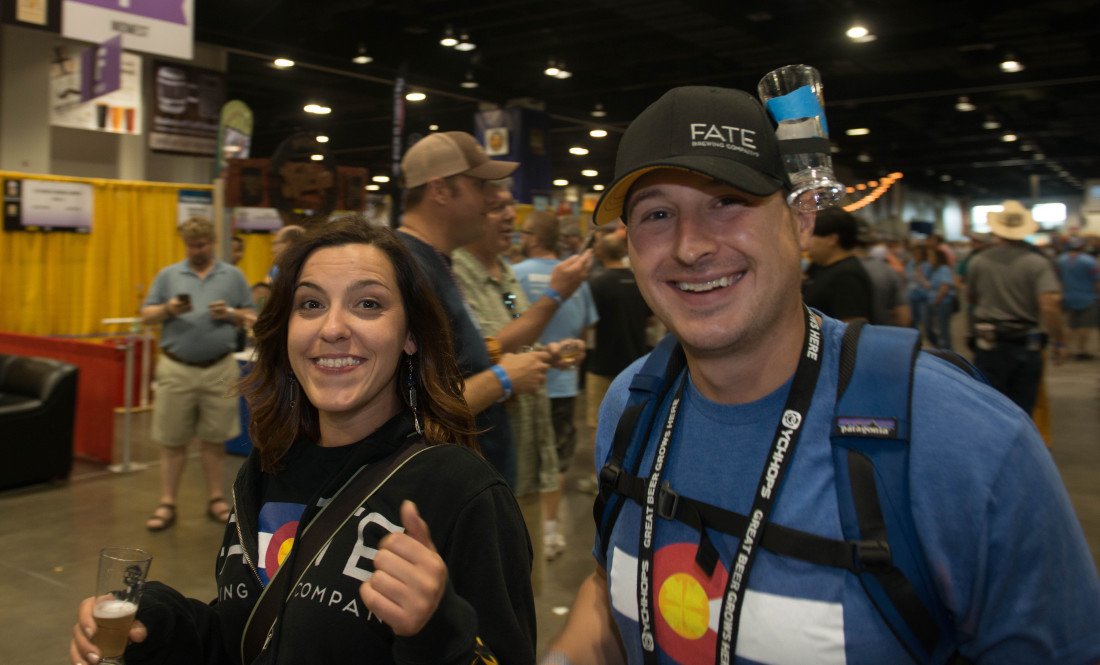 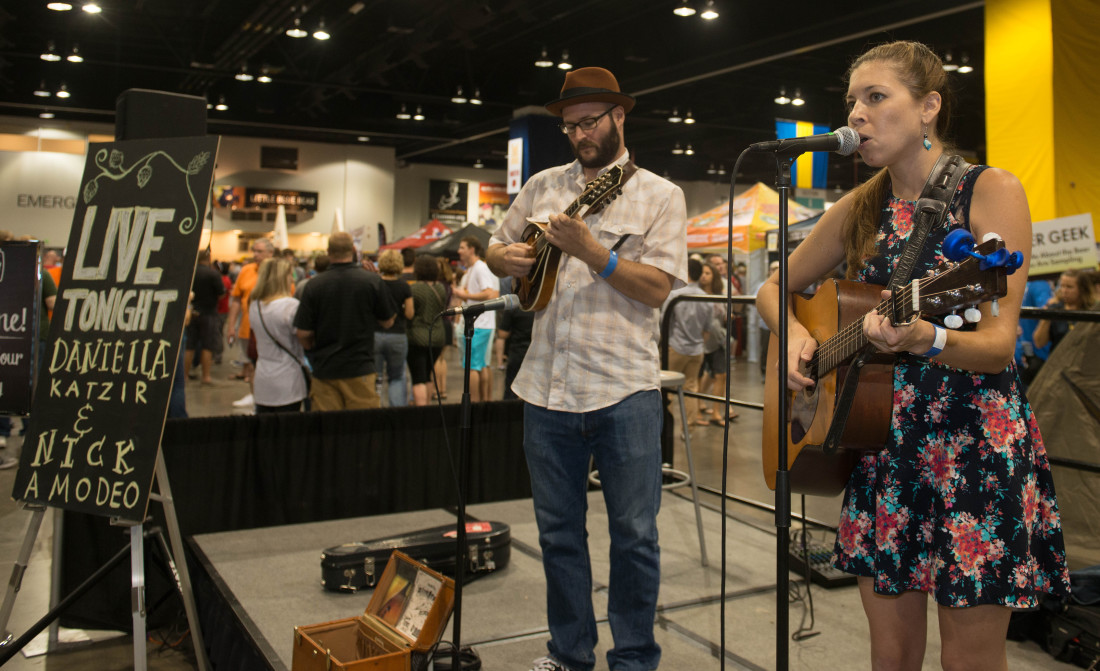 Live music was part of the event too. 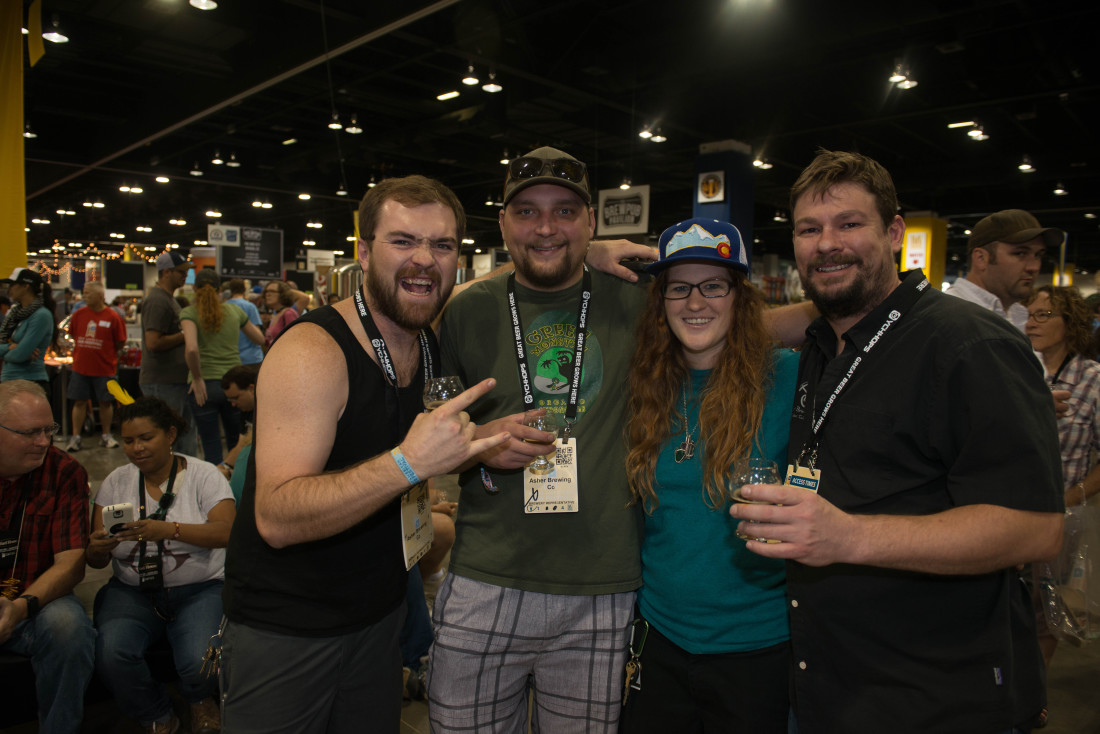 The team from Asher Brewing in Boulder, Colo., one of about a dozen organic breweries in the country. Forest Engsrom, Jon Paul Stough, Kerri Scharfenberg and founder, Chris Asher. 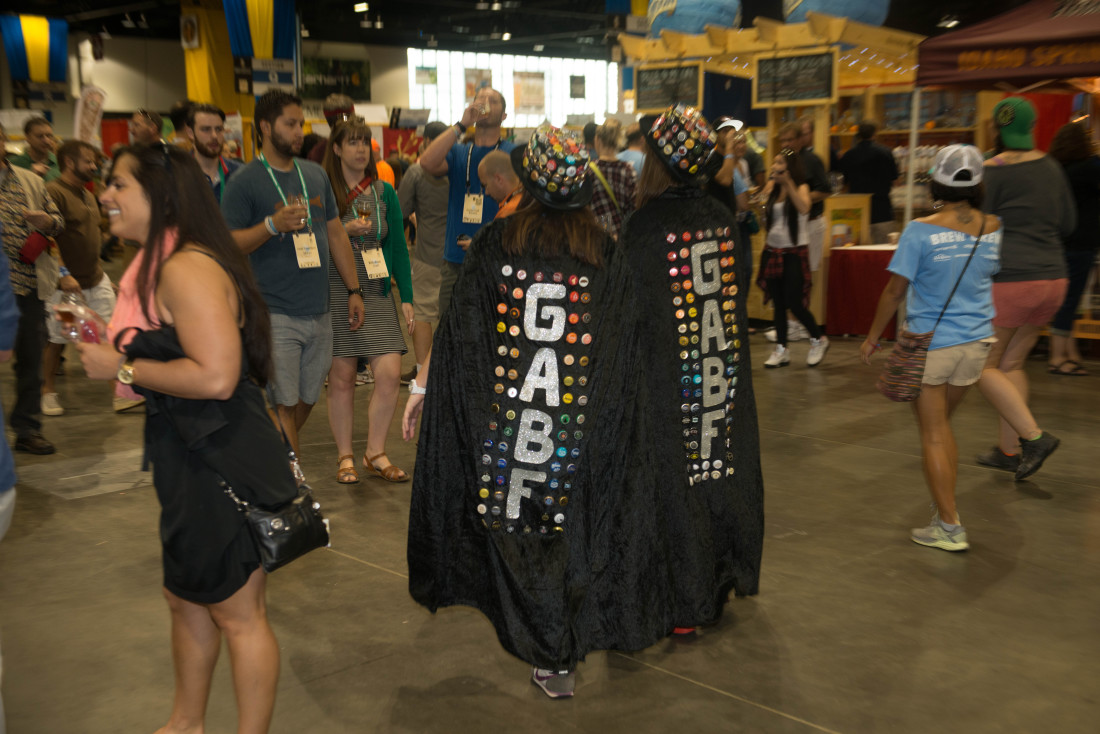 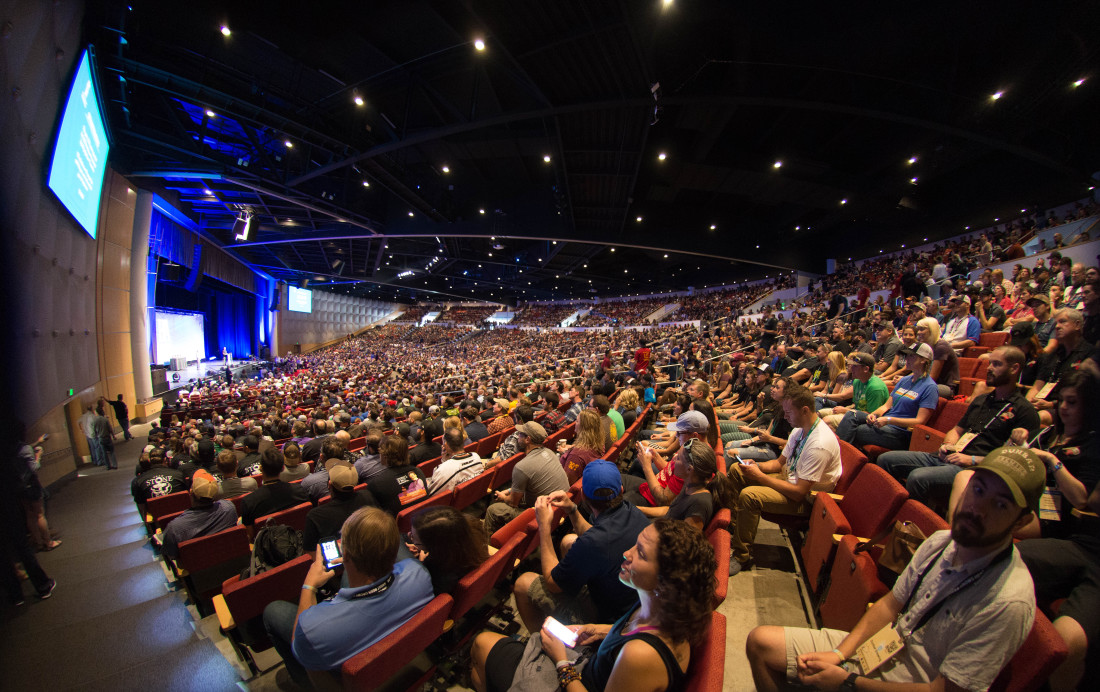 The awards ceremony was well-attended. 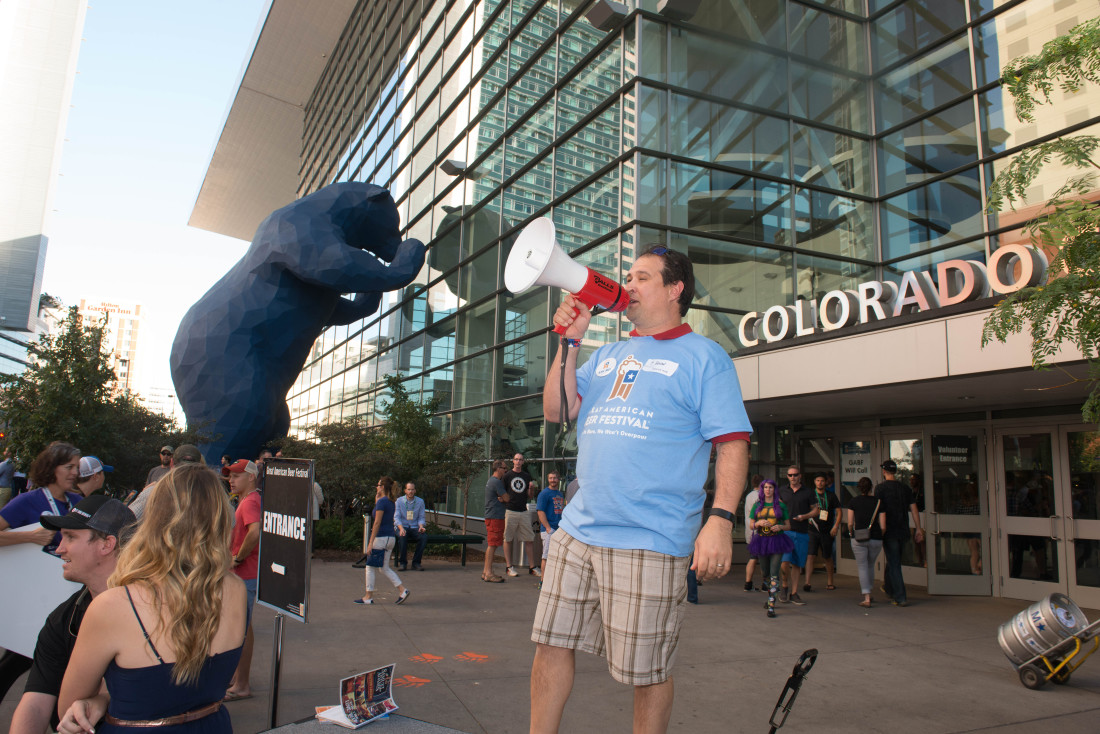 The sold-out event from the street. 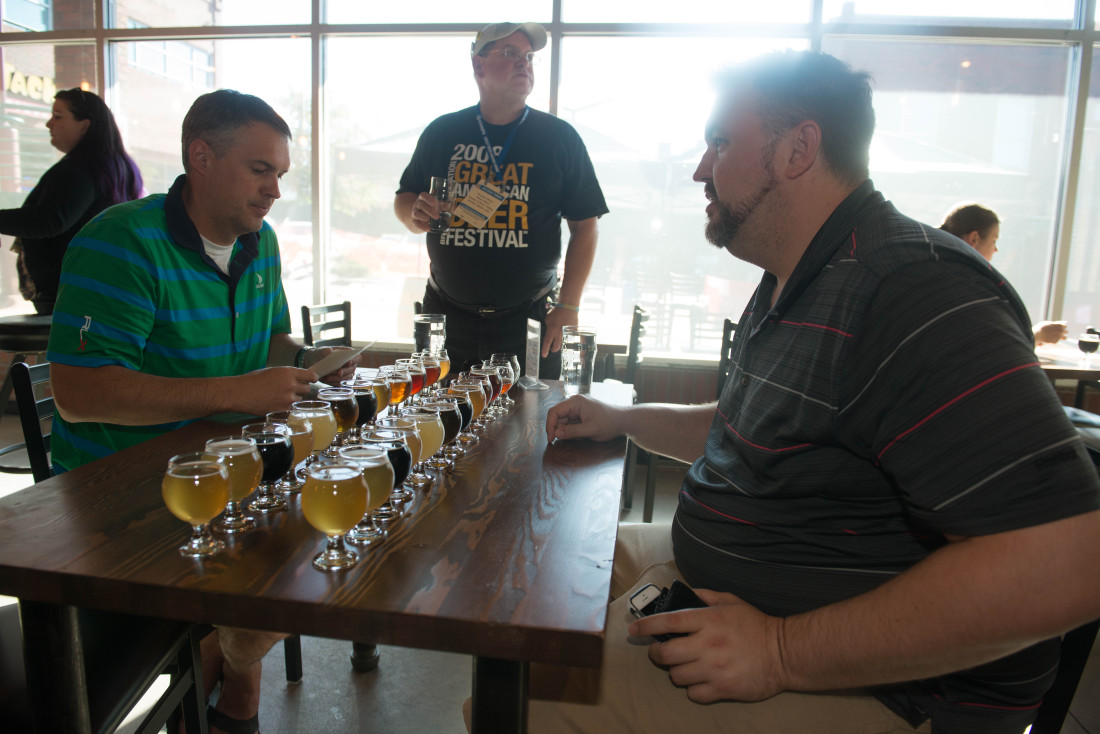 This tasting session was among numerous events held in conjunction with the GABF around Denver. 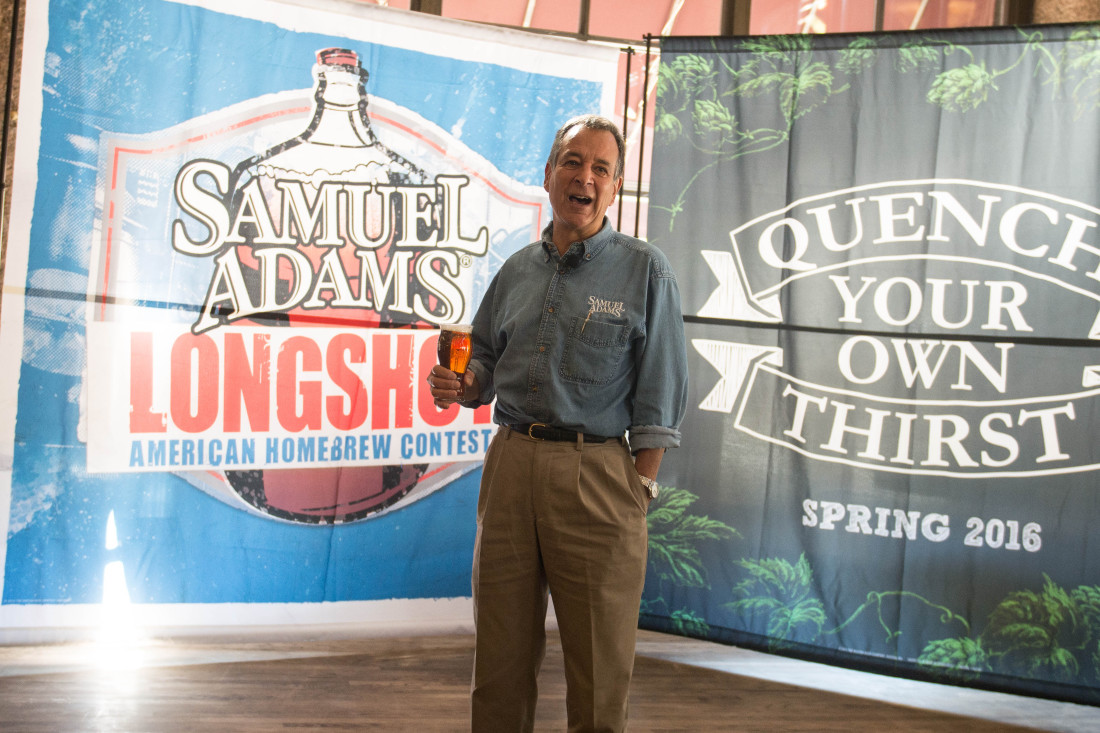 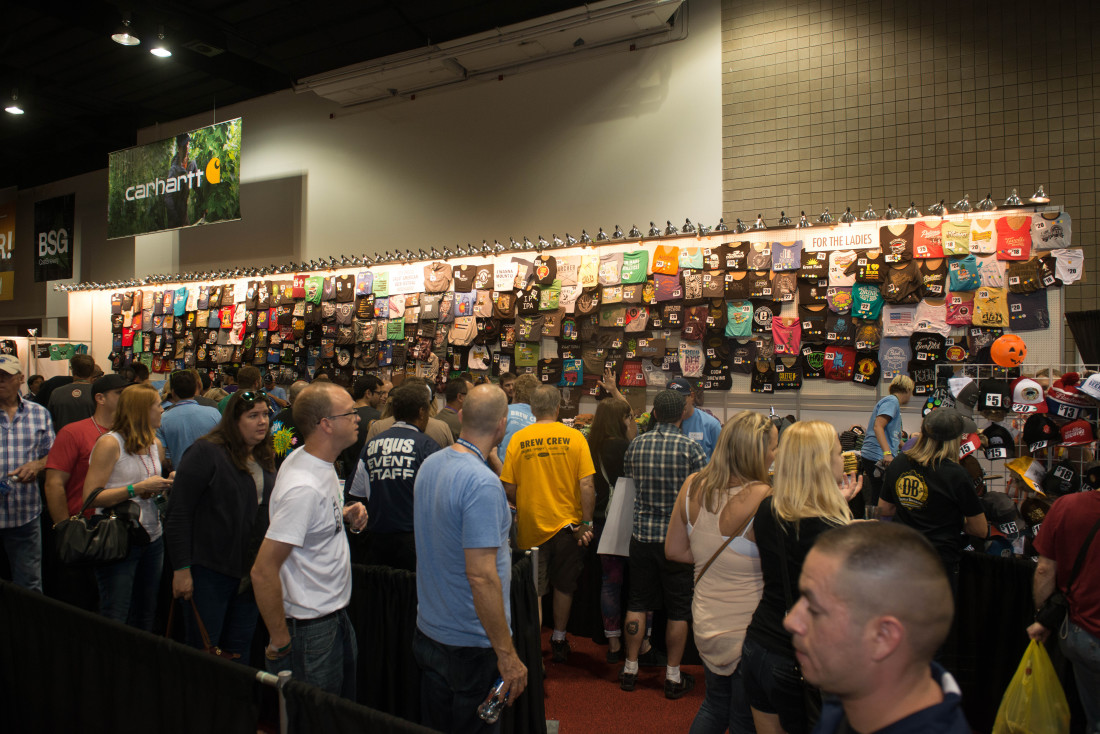 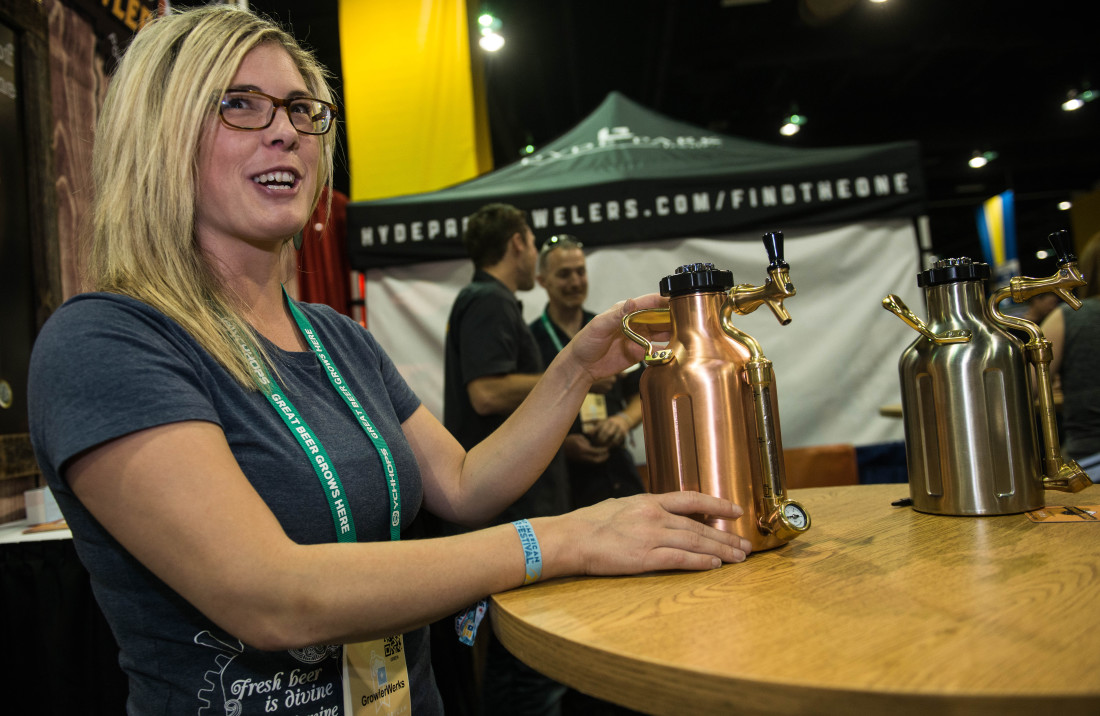 Nifty growlers by GrowlerWerks allow you to control carbonation. 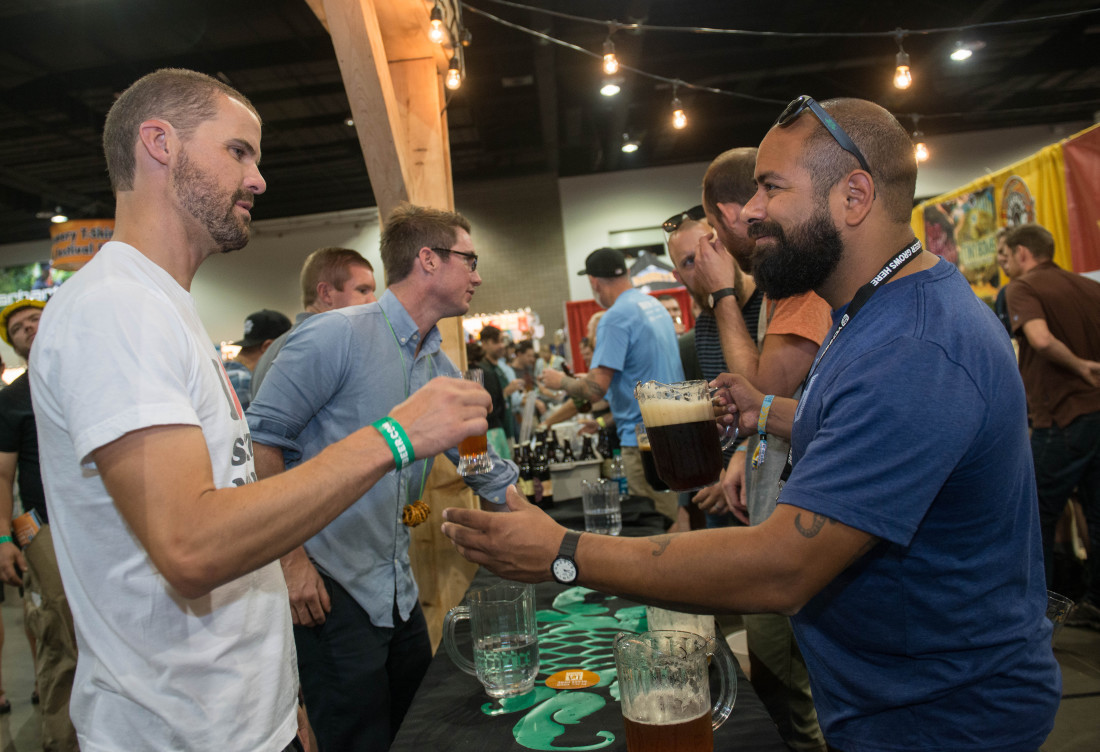 Pouring at the Wicked Weed booth. 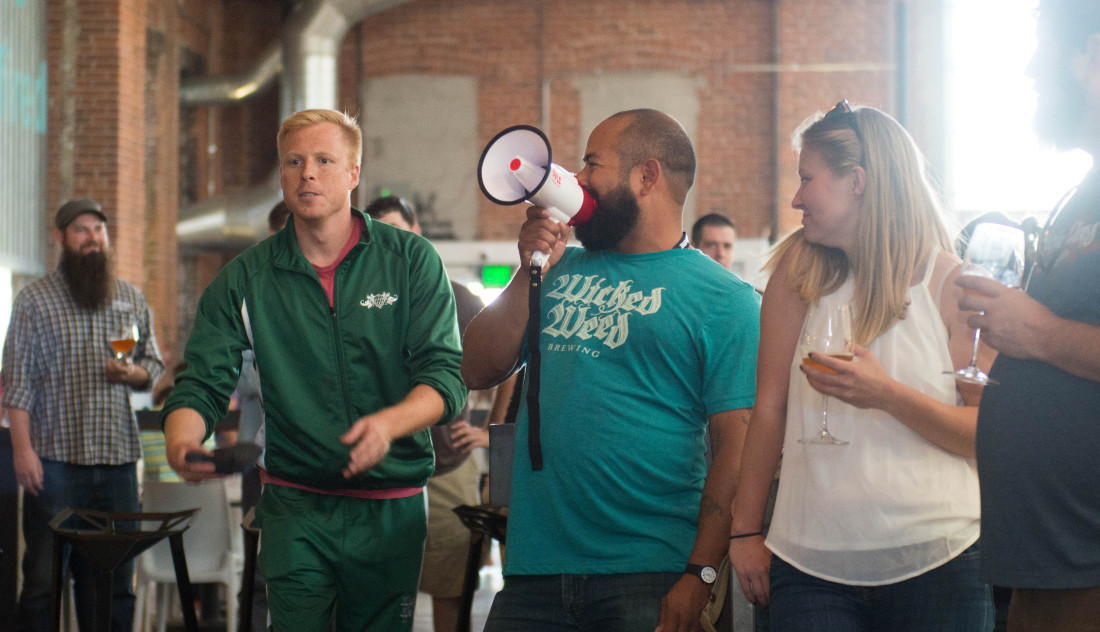 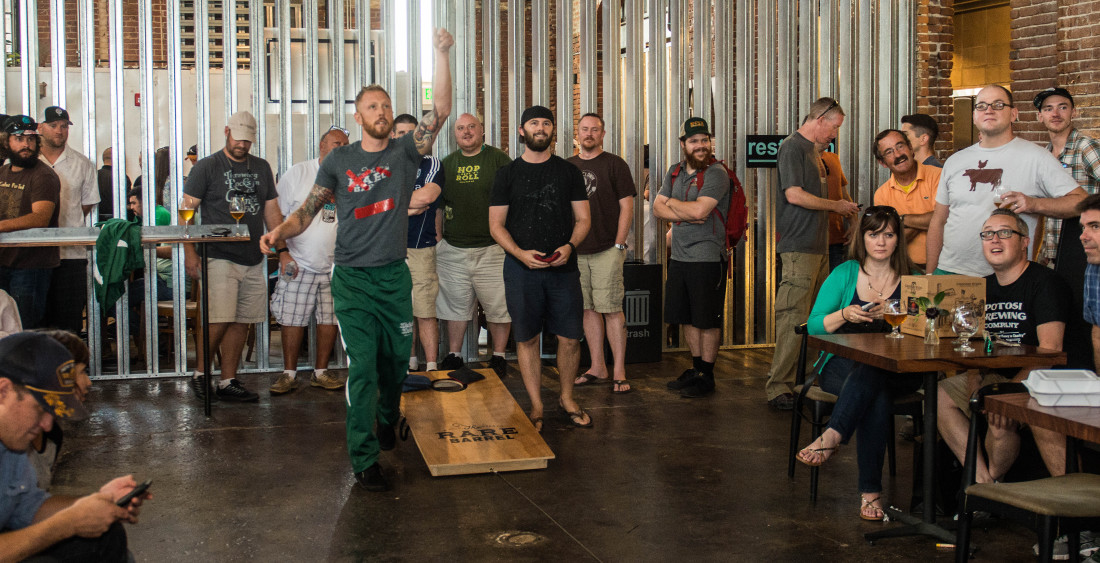 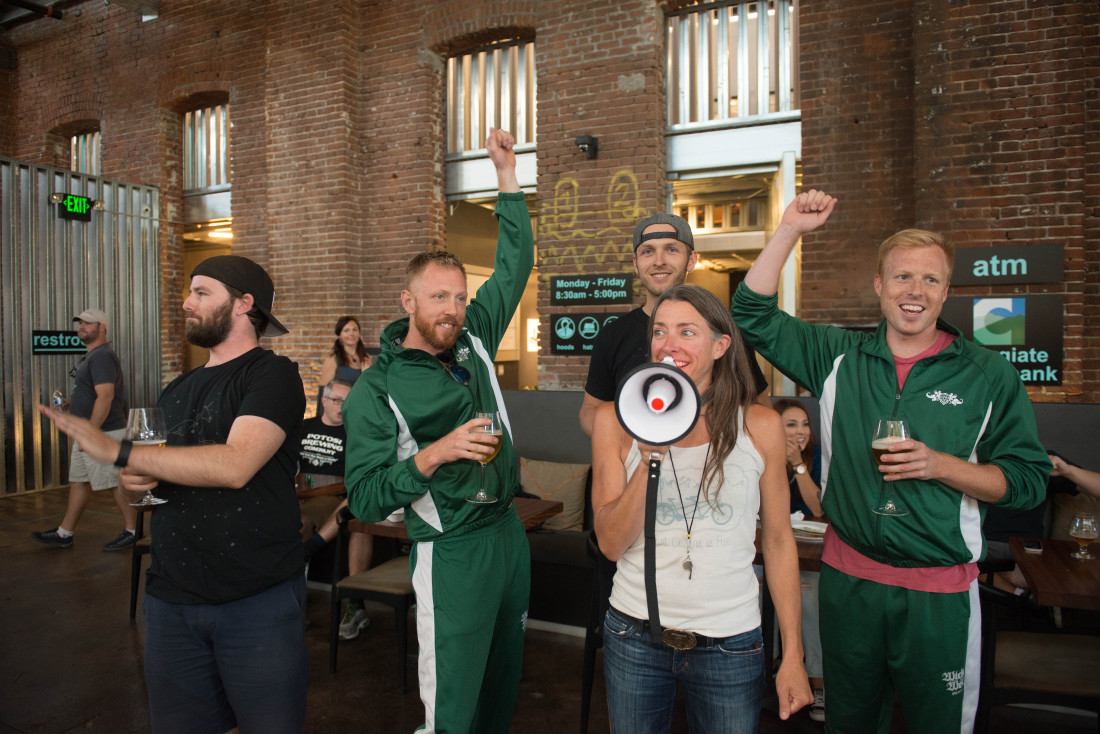 A corn hole grudge match between The Rare Barrel and Wicked Weed took place at the Crooked Stave of Denver. 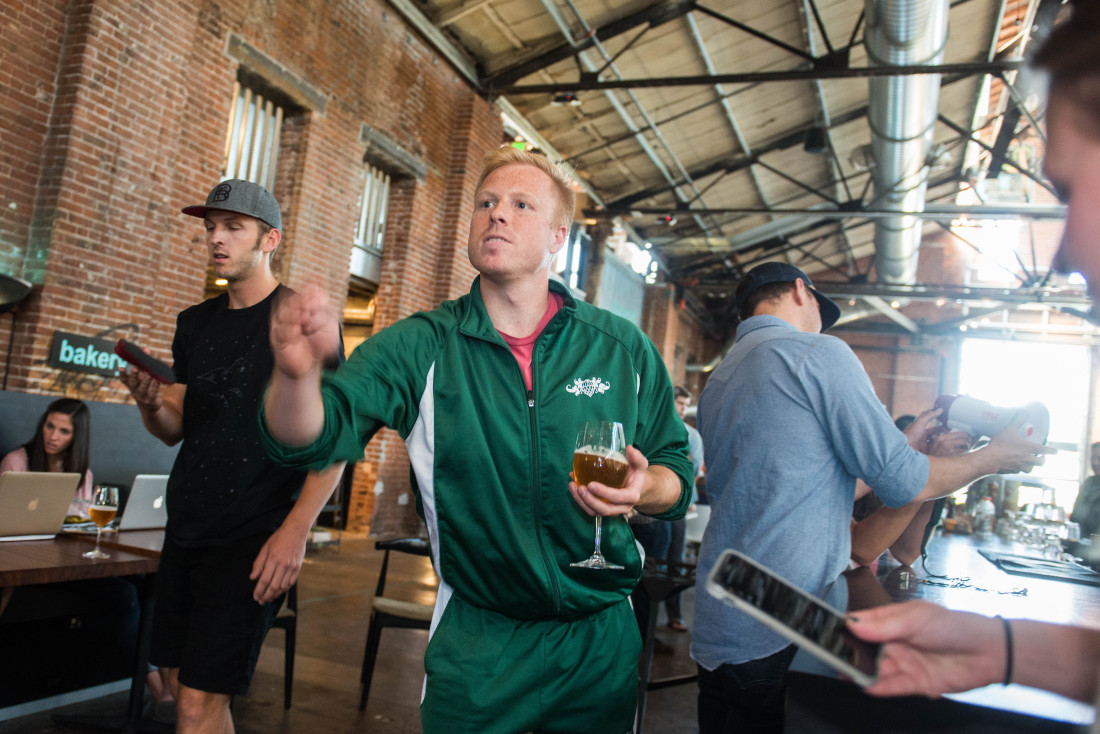 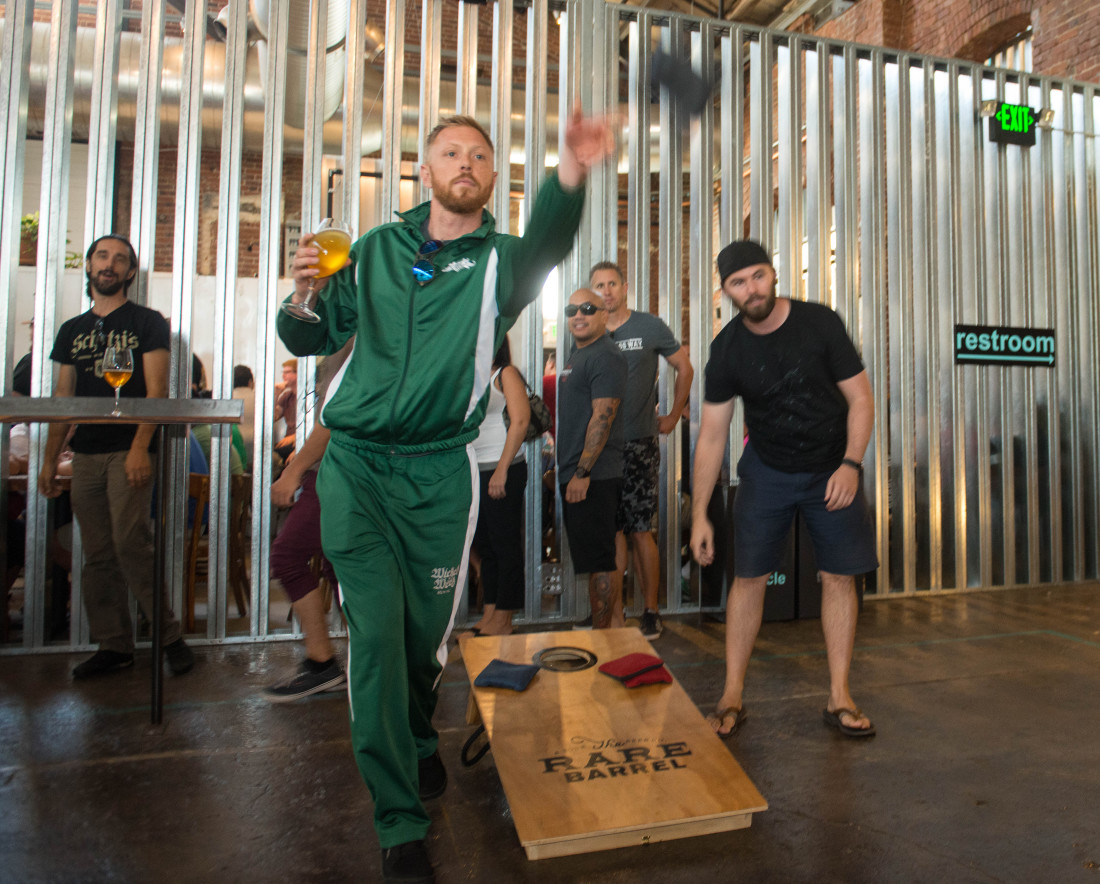 Tim Reese is a photographer and video producer. He founded the Craft Beer site www.bigwestbeers.com providing insights and profiles on breweries and events. He lives in Boulder, CO and craves oysters on a regular basis. Follow me @rounderone
View all posts by Tim Reese →