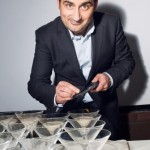 Cúrate chef and co-owner Katie Button says the name Nightbell harkens back to the late night doorbells rung to get service. “To us it had this reference to the idea of having a speakeasy with a separate doorbell and entrance,” she says. “It’s a bar with fun craft cocktails, excellent food — interesting, surprising and whimsical. My brother-in-law Cesar will be the DJ, and we’re focusing heavily on the music,” Button says. She and her husband, Felix Meana, plan to feature specialty liquors that, they say, are found nowhere else in Asheville.

“It’s certainly not an easy process, but the main prohibitory factors that keep these liquors off the shelves of local restaurants and bars are that they’re expensive, and that you can’t buy just one bottle,” says Button, without disclosing exactly what specialty items she’s planning to bring in. “You have to buy them by the case,” she says. “It might take us months to finish a single bottle, but we look at it as an investment. Felix and I think it’s important to be able to offer them here.”

Nightbell will feature a selection of fine wines by the glass that one would not typically find, says Meana. His strategy at Cúrate has been to educate customers about various Spanish wines. “I try to offer inexpensive wines and also the experience of wines that are less affordable, but still a great value. What we want to do at Nightbell is the same thing, but globally,” he explains. “Now we will offer wines from France, Italy, America and Spain,” he says. Fifteen table and premium wines will be sold either by the bottle or by the glass.

Button characterizes Nightbell’s menu as “a modern twist on American bar food” — delicacies that can be picked up and consumed in one or two bites, even the Caesar salad. “We’re really focusing on the quality of the ingredients and try to present them in beautiful, unusual ways,” she says.

Nightbell will serve an interesting variety of specially ordered fresh oysters shipped directly from oyster farms on the East Coast. Raw oysters will be served with a series of tinctures that can be applied as condiments, with selections such as lemon, fennel, smoke, vanilla, lavender or cumin. “You use just a drop or a spritz of this flavor aroma, and you taste the oyster and the true ocean flavor with just that hint of something extra,” Button says.

Lobster will be poached to order in a beurre monté and finished with a sauce made from lobster shells for the lobster rolls. The “grilled cheese” will be a Gruyère and Comté cheese fondue with fresh herbs and truffle enclosed in a crisp pastry shell. The fried boneless chicken wings will be finished with a chicken glace and served with blue cheese mousse and celery-apple slaw.

Button’s variation on chicken and waffles replaces the chicken with duck confit, foie gras and duck glace arranged over light crisp waffles. The Philly cheesesteak will be served rare, topped with caramelized onions and a warm cheddar mousse. Hand-cut steak tartare will be finished with a horseradish cream and served in a thin brik pastry cone.

Nightbell has three bars for serving beverages and one just for desserts. Since Button and family are assembling a pretty large pastry team, expect to see a wide variety of plated desserts. There will also be a “root beer float” interpreted by Button as a snowball of vanilla bourbon cream inside a hard shell made by dipping a ladle of the mixture in liquid nitrogen. It is served sitting on a bed of shaved ice drizzled with a homemade root beer and bourbon syrup. “You crack into the snowball and that vanilla cream oozes out into the root beer ice. It’s really refreshing,” she says.

In another aspect of the restaurant, Button collaborated with her husband and mother, Liz, on Nightbell’s layout. “You enter on South Lexington through what looks like a vintage storefront,” Liz Button says. “The reception desk is an apothecary chest. After ascending the staircase, you enter the bar.” The dance floor will be in front of the elevated DJ’s booth.

Seating options will include tables for two along a 21-foot-long banquette with stools, areas with sofas, chairs and tables, and two long communal tables with stools. “The feel will be vintage baroque and rococo with a little contemporary, but not industrial,” said Liz Button. Be on the lookout for Nightbell’s winged muse, inspired by Asheville model Samantha Rose Antaramian. Her image will be so ubiquitous it will become a part of Nightbell’s branding. Maybe she will inspire you to return and ring the nightbell.

One thought on “Ring the Nightbell”