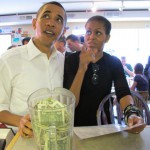 Power lunch: President Obama and first lady Michelle mulled over the menu options at 12 Bones Smokehouse in the River Arts District in May of last year. Photo by Pattiy Tourno 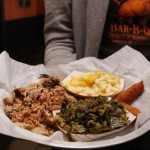 Food fight: Asheville has its fair share of good barbecue joints like Luella’s (pictured), while Charlotte does not, despite the first Lady’s recent claims, which caused much ado in the food community. Photo by Jonathan Welch

Whole hog or butt? Pulled pork or ribs? Tomato or vinegar-based sauce? Barbecue aficionados are a particular bunch. When a [likely well-meaning] Michelle Obama released an e-mail praising Charlotte as the site for the 2012 Democratic National Convention, the peculiarities of the barbecue ilk became even more evident. The first lady applauded the city for its Southern charm and diversity and then, in the gaffe heard ‘round the food world, erroneously lauded it for its great barbecue.

And who would have thought that the innocent claim would cause such an uproar? Even Charlotte-based newspapers smoked Obama for her misguided assumption about the city's food scene. Just because Charlotte's in the South doesn't mean that there's good barbecue there, they said. Claiming otherwise is akin to assuming that Roswell, N.M. has great tacos just because it's in the South West.

"Everybody was amused by it," says Kathleen Purvis, food editor for the Charlotte Observer, of the first lady's misstep. "Everyone who lives in Charlotte knows this is not the place where you send people for North Carolina barbecue."

Though she acknowledges that, of course, barbecue exists in Charlotte, Purvis says that the region is better known for its soul food. "We have great fried chicken," she says.

For good Carolina 'cue, Purvis says, it's essential to step outside of the city. "Barbecue in North Carolina is a rural art. It's more small-town." And Charlotte, as the largest metropolitan city in North Carolina, can't exactly be looked to for small-town style. "When people call me about barbecue, I tell them immediately to get in a car and go 40 minutes north or an hour west to Lexington or Shelby," says Purvis.

And Purvis knows her barbecue. In a 10-minute talk about smoked meat and overly eager political pundits (Fox News pegged the health-minded Obama as a hypocrite for even mentioning barbecue), Purvis delves deep into the barbecue's history.

It's when she gets as deep as the Great Wagon Road, a migration highway stretching from Philadelphia to North Carolina, and its influence on a foodstuff that many dismiss as sandwich stuffing, that she laughs. "That's probably more than you ever wanted to know about the history of it. I end up having to be a scholar of barbecue. It almost comes with the territory with this job."

Xpress wonders aloud (rather hopefully) to this scholar of smoke: Is it possible that Michelle confused Charlotte with Asheville when she praised the city for its barbecue?

"I think she confused Lexington with Charlotte, honestly," Purvis says, laughing. "Look, we can sit here and name off the 15 or 20 top barbecues places, and those are all going to be in your small towns and rural areas."

Pressing the issue, Xpress notes that the Obamas did seem rather keen on our 'cue. After all, when the first couple visited Asheville last summer, they quickly lead their entourage to 12 Bones Smokehouse. In fact, they hightailed it to the River Arts District joint so quickly, news reporters were still wondering if the Obamas had even left the tarmac at the same time as Ashevilleans snapped cellphone photos of the president ordering blueberry-chipotle ribs.

"Blueberry-chipotle? See, that's not classic North Carolina barbecue. But that doesn't mean it doesn't taste good," says Purvis, who goes on to say that she's heard great things about 12 Bones. "I just want to put it in the same category as a place we have in Charlotte called Mac's Speed Shop that's really popular," she explains. "It's got great ribs, but it's not traditional North Carolina barbecue; it's not old enough. It's not got that venerable history of a place … That doesn't mean they don't have delicious food, that just doesn't mean that they're classic barbecue restaurants."

Purvis says that when it comes to the barbecue (and other food) in Asheville, what we do have is a wealth of innovation and talent. "There's a younger generation of chefs that are breaking out of the mold," she says. "There's nothing wrong with understanding what something is, how to cook it and taking it in a different direction. Just don't present it as being the traditional thing."

Though Asheville may not yet have its own lengthy barbecue heritage, at least it has style. And speaking of style, where does Purvis stand when it comes to barbecue?

"See, I don't answer that question," she says, laughing. I call myself non-partisan in all barbecue matters."

And as for the Obama gaffe? "She tried to say something funny and people took it a little too seriously. Come on folks, let's relax a little bit."

Long before chefs were planting vegetable gardens in Asheville, current Buncombe County Commissioner (and former Asheville High principal) Bill Stanley was smoking pig on school grounds. "They built for me, at my expense, a barbecue cooker that would cook a whole pig," says Stanley, who recalls that he had the smokers installed at Asheville High in the late ‘60s.

Stanley finally opened his own joint downtown in the late ‘70s, and by most accounts, it was the place to be for local barbecue. "We sold a lot of hog at Bill Stanley's Barbecue and Bluegrass," Stanley says. "We'd do about a ton a week. I've cooked a lot of barbecue, yes ma'am."

Even with his long personal history with barbecue in this town, Stanley agrees with Purvis on Asheville's lack of old-school 'cue-cred. "In Buncombe County, to my knowledge, we didn't have that history of the hickory-smoked barbecue, at least past the last 50 years or so, that much of the rest of North Carolina has," he says. "But I don't think that Charlotte was a part of it, either," Stanley adds, chuckling.

What barbecue history we do have, says Stanley, we mostly owe to the flatlanders. "We've always barbecued up here in some form or fashion, but I have to admit that eastern North Carolina has probably got the biggest influence on us."

To Stanley's knowledge, the first barbecue joint of note in Asheville was the Barbecue Inn, Gus Kooles' place out on Patton Avenue, opened in 1962 (and still going strong). "Gus advertised it as eastern North Carolina barbecue," says Stanley. “He had that on his sign out front." Just a year later, Joseph Carr Swicegood, Sr. opened Little Pigs (which still does a lively business) on McDowell Street, just across from the high school where Stanley used to go whole hog.

Since those days, the scope of barbecue in Asheville has widened, of course. Many of our local barbecue restaurants offer smoked tofu or tempeh, something that would have caused considerable head-scratching in the earlier days of Asheville's still-fresh barbecue lore. But, says Stanley, even if we may never reach Lexington standards, we're making our own mark.

"We're on our way. Luella's down on Merrimon Avenue is exceptional. Moe's barbecue is good. Okie Dokie's barbecue, they all do a good job. I've tried them all," says Stanley.

And what of 12 Bones? "Of course, that's the president's favorite place," Stanley says just before musing aloud: "I wonder if Mrs. Obama got Charlotte and Asheville a little bit mixed up?"

We can assume, likely, that the Obamas have more on their minds than the pork culture in selecting a site for the 2012 Democratic Convention, but the barbecue-minded Stanley still wonders how well the first couple will hold up in the city. "I don't know if they'll find any barbecue in Charlotte,” he says. “Maybe they should head to Bridges Barbecue in Shelby. I believe it's been there for 90 years."

Maybe they'll make even a trip back to Asheville, Xpress posits. After all, they seem to really dig our barbecue. "Oh, mercy, I'd say they do!" Stanley practically hoots. "They took some home with them, as I understand it."

When asked if Stanley has a message for the Obamas, he offers this to the famous couple: "Hey! Come on back! We love you and appreciate you plugging our barbecue … Just make sure that you get the city right next time."