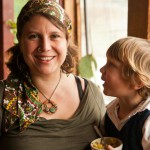 Starfruit: “Between being very eccentric, nutty, raw, ADD and dyslexic, it's a miracle that I've made it to any level of success in my life. I'm very lucky,” laughs Rosetta Star. Photos by Max Cooper 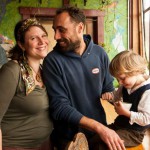 Family affair: Rosetta Star with her husband Jack Buan and son. “He’s the brains and brawn behind the operation, I’m just the smiling face,” Star says of Buan. 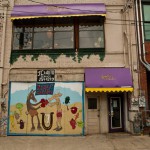 Street view: After a decade in business, Rosetta’s Kitchen will expand into the J.C.’s Auto space below it.

After almost a decade in business, Rosetta's Kitchen on Lexington Avenue is expanding in a big way. While business booms, Rosetta Star remains grounded in community. The restaurant owner and mother of four says that community involvement has been instrumental to her success.

You may already know that Star is launching a packaged-food line called Starfoods. So far, the line includes veggie burgers and peanut butter tofu, currently available in the frozen-foods section of about 10 Earth Fare stores, as well as in the French Broad Food Co-op, Black Mountain Natural Foods, Trout Lily in Fairview and the West Village Market. Bigger, more mainstream groceries are also on the horizon. UNCA, Mission Hospitals and Park Ridge Hospital have all placed orders for the vegetarian burgers, Star says.

The biggest news for the landscape of downtown Asheville, however, is that Star and company are expanding Rosetta's Kitchen to two stories with a full liquor bar opening later this year on the lower level.

New life for an old building

J.C. Maynard, the car-repair shop located directly below Rosettta's Kitchen, has been open for almost half a century. After 47 years, Maynard is retiring, says Star, and the restaurant is poised to claim the garage. Star and company will install a new floor and resurface the walls, also adding a street-level patio space with a retractable garage door than can be left open in warmer weather. "We're going to lose part of that real estate in order to gain street-level patio space. Just a little bit, the same footprint as upstairs," Star says.

The Lexington Avenue level will only be open to the public in the evenings as an overflow dining area and bar. "We've wanted to put in a liquor bar for a long time," Star says. "We're really excited about making real tonic-style mixed drinks and, particularly for me, Buchi-ritas are my favorite, so we'll have an array of kombucha cocktails."

It's "where the block is," says Star, who says that Lexington Avenue has become a relatively hopping area for nightlife — something it wasn't 10 years ago. "We've become saturated with bars and restaurants, and it's a great place to be for that."

Adding another level will also afford a prep kitchen, giving the restaurant's staff more room to breathe. For a decade, employees have all crammed into one small kitchen where they make breads and baked goods, soups and dressings from scratch and feed a lot of mouths. "We've gotten a little tight up there," says Star. "Not everyone understands just how much we do back there."

Currently, the staff is forced to store a large mixer and food processor in the office, which they roll through the dining room to the kitchen, then back to the office for storage after use — and it all has to happen before customers can be allowed in the restaurant.

It's clearly time to expand, Star says. "We're still exploring all of the uses the space will be viable for," she says. If the lower floor can be outfitted with a ventilation hood, the Starfoods line might find a home there, too.

Right now, the packaged products are made in a small production kitchen that also serves Gypsy Queen Cuisine and a few other food businesses. "We're outgrowing our shared kitchen rapidly," Star says. Given the current growth of Starfoods, Star projects that a processing facility will be necessary within two to three years, but in the interim, Blue Ridge Food Ventures may be a viable alternative. The Enka commercial kitchen-for-hire offers equipment that will enable the further expansion of the Starfoods line into bottled and canned goods.

Ten years after the birth of the Rosetta's Kitchen, life has changed in some ways, though the sense of community Star and others attached to the eatery remains intact. "I was 10 years younger in the beginning, with only one child, no husband and a great tribe of friends and family and loved ones around me to make it happen. I still had a lot of community support," she says. "It's pretty valid to say it's been a community effort over the years."

Star's staff still largely consists of friends and peers, many of whom have worked there for three years or more. "We have an insane long-term retention rate for the restaurant business," Star says. That low turnover rate is, in part, due to the fair treatment her restaurant employees enjoy, something that Star says comes naturally to her. "I can't look people in the eye if I'm abusing them. Go figure. Is that wild and radical?"

Adding to employee satisfaction is the near-elimination of the hierarchical system prevalent in many restaurants. "We don't have managers that look over people’s shoulders and micromanage people," Star says. Instead, a strictly voluntary, paid committee of veteran staff members meets to decide matters from hiring to firing. "They participate because they feel personally invested in the business and they care about their coworkers and they care about having a good work environment," Star says. "They have that emotional ownership of the restaurant. It's just good citizenship, right? Treating people like equals?"

Star says that other businesses could likely benefit from the same committee model. "A lot strife and uncomfortableness in the restaurant industry — lots of industries, really — comes from unclear communication between different people doing different jobs," she says. To further address that, Rosetta's Kitchen holds open meetings where people are encouraged to talk about problems that are coming up at work and discuss solutions. If a lot of grievances need to be aired, Star may bring in a facilitator. "It creates better understanding, better trust and a more well-rounded, happy, functioning crew," she says.

Not only is the egalitarian business environment good for the well-being of the employees, she credits the restaurant’s finacial stability with high morale. "We save a lot of money in not monitoring others or constantly retraining," she explains.

Even before the restaurant prospered, Star gave back to the community in a number of ways.

First came the Community Cauldron, a weekly program where the restaurant offered a “free” dish of soup and hunk of bread in exchange for a charitable donation which was rerouted to selected area nonprofits or individuals in need.

More recently, Star debuted the "Everyone Eats" plate, a relatively cheap-to-put-together entree of organic beans, rice and slaw or chips. The plate is sold on a sliding scale, with a cost between $2 and $6. "Anywhere between that, we just accept your money," Star says. "If someone donates more than that, it goes to $2 voucher coupons that go in the register for anyone who can't afford the $2. It's up to the community to makes sure that fund stays full."

Star calls the Everyone Eats plate "a tiny step I can take as a business owner."

"Food commerce can be a little spiritually sketchy," Star says. "Food is a fundamental human right, and we forget about that. So, making sure that we always have something for everyone is something that's very important to me. My whole reason for being in business is because I see it as a route to creating change. My life motto and my business mission are almost the same: to create positive change through the business of nourishment."