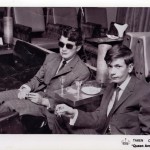 FROM GREECE WITH LOVE: Pete Apostolopoulos, pictured right with his friend, Chris Leris, immigrated to New York from Greece in 1967 on a boat named the Queen Anna Maria. He made his way to Asheville, where his uncle owned Athens Restaurant on Merrimon Avenue. Photo courtesy of Pete Apostolopoulos 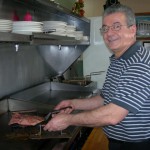 SERVICE WITH A SMILE: Ilias “Louie” Sellas became a partner in Five Points Restaurant about seven months ago. He makes a point of greeting each customer who walks through the door. Photo by Toni Sherwood 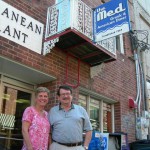 LOCAL FAVORITE: Pete Apostolopoulos, pictured with his wife, Paula, offers a longtime customer favorite of scratch-made biscuits and gravy every Saturday morning at his landmark downtown restaurant, fondly known as “The Med.” Photo by Toni Sherwood 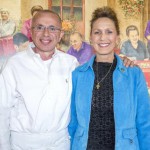 ALL IN THE FAMILY: John and Susan Poulos own the Apollo Flame, a Greek-Italian restaurant where John uses his grandfather’s recipes. Photo by Alicia Funderburk

Some of Asheville’s best but least expensive eateries have a history steeped in Greek flavors. Name a longtime diner or recall one that’s no longer around, and it’s quite likely it was owned and run by Greek immigrants to the area. Athens Restaurant and Three Brothers come to mind, though both are gone. But (to name just a few that still rank high as city favorites), there’s The Mediterranean, Apollo Flame Bistro and Five Points.

“The Greeks were in the restaurant business, so that’s where you worked,” says Pete Apostolopoulos, owner of The Mediterranean Restaurant in the heart of downtown Asheville. Well-known for his sense of humor as much as for his food, he jokes, “Who else would let you work 16 or 17 hours a day even if you spoke no English?”

Apostolopoulos was a high school senior in Greece when the U.S. Peace Corps brought generators and other modern conveniences to his small mountain community. “They were telling us about America, and I thought, ‘What am I doing here?’” he recalls.

So in 1967, Apostolopoulos arrived in New York on a boat named the Queen Anna Maria. He immediately took a train to Spartanburg, S.C., and made his way to Asheville, where his uncle owned Athens Restaurant on Merrimon Avenue. By 1975, Apostolopoulos had become the owner of what locals fondly call “The Med.”

John and Susan Poulos, meanwhile, have been in the restaurant business here for 40 years and at the Apollo Flame Restaurant location on Hendersonville Road for 25 years (the Brevard Road location is owned by his cousins — of course).

When he was 13, John emigrated from Greece with his parents and sister. “In Greece, at 13 you’re done with school,” John explains. “You come to the U.S., you kiss the ground. We didn’t even have shoes.” He started out washing dishes at his uncle’s Happy Hill Restaurant on Patton Avenue. “We worked the first day we came here,” John recalls.

In 1988, John opened Apollo Flame, a Greek-Italian restaurant where he uses his grandfather’s recipes, which have been passed down for three generations. John worked side by side with his late father for 40 years.

He met his wife, Susan, in 1990 when she was working at a bank. “He brought me to the restaurant a year before we got married to be sure I could do it,” Susan jokes. The couple have no children, so they’ve taken their employees under their wing. Susan admits, “It’s hard to find a group of people who can work together and who you can trust.” So when they find them, they hang on to them, she says.

Each morning the staff gathers for elaborate breakfasts — often cooked by John before work begins. A huge mural, filling an entire wall of the restaurant, depicts not only close relatives but also employees, many having worked with the family for 15 or 20 years.

A relative newcomer to Asheville, Ilias “Louie” Sellas joined Tommy Triantafilou as a partner in Five Points Restaurant on Broadway about seven months ago. “I love cooking,” Sellas says. He credits the Triantafilou family for the success of this popular diner and was thrilled to join the team.

Sellas left his home country at age 15 and says, “There was no place to survive in Greece.” In 1975, he visited his brother in New York and started working as a dishwasher at a restaurant there. By 1982, he had bought the place, and his son still runs it.

Sellas discovered Asheville when he came down to help out at his cousin’s restaurant in Hendersonville. Like many successful restaurateurs, in a business with long hours and lots of competition he makes a point of interacting with customers. “Customers want to see you here,” Sellas says, greeting everyone who walks in the door even during the interview.

Susan Poulos agrees. “They like it that the owners are here and they like to see you working. Some [customers] have known John for 30 years now.”

Apostolopoulos says the feeling is mutual: “My customers become my friends.”

But their children may not follow in their footsteps. Apostolopoulos says he isn’t sure who will eventually take over his restaurant: One daughter aspires to be a pharmacist, and the other is working at an architectural firm in Chicago. But he has no definite retirement plans. He’s up at 4 a.m. every day and at the restaurant by 5 a.m.

Although both of Sellas’ grown sons are in the restaurant business, he says, “I’m addicted to this business. I don’t see myself retiring. I don’t even think about retiring.” Since joining the Five Points team, Sellas has added some Greek specialties to the menu: moussaka, pastitsio, spanokopita and a daily special, such as stuffed cabbage. An experienced cook, Sellas took what worked over the years and made his own recipes.

Other secrets to these restaurateurs’ success? Sellas says, “We pay loyal customers back with good-quality food at reasonable prices.” On Saturday mornings Apostolopoulos always whips up biscuits and gravy from scratch, a longtime customer favorite.

“These days you’re not getting rich with restaurants,” Apostolopoulos says. “You’re just making a living.”

Rather than aiming for higher profits, these restaurateurs value their customers and want to be accessible to people of all income levels — so they keep the prices low. “We sell a main dish for what others sell appetizers,” John says. “And we have the same prices for lunch and dinner,” Susan adds.

“People say to me, ‘How can you sell a spinach pie and Greek salad for $7.95?’” Sellas says. “But we’re not here to get rich. We want to make a living and keep the customers happy.”

By far, the biggest common denominator with Greek restaurateurs is their love of America. “It’s a beautiful country, and I love it to death,” Sellas says.

“Asheville’s been good to me,” Poulos says, “This is home.”

Apostolopoulos agrees. “I live the American dream. I came from nothing. I’m glad to be here.”

Toni Sherwood is an award-winning filmmaker who enjoys writing articles, screenplays, and fiction. She appreciates the dog-friendly, artistic community of Asheville.
View all posts by Toni Sherwood →