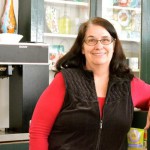 SYNERGY: Eagle Street Coffee Emporium owner Teresa Johnson, right, says she hopes her business will become an integral part of a community on the rise. EMSDC’s Stephanie Swepon-Twitty, left, says a primary goal for The Block is to preserve the past and prosper in the future. Photo by Elizabeth Reynolds McGuire 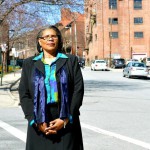 LOOKING BACK, MOVING FORWARD: MSDC’s Stephanie Swepon-Twitty, left, says a primary goal for The Block is to preserve the past and prosper in the future. 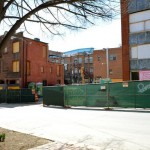 Look down Eagle Street from Biltmore Avenue, and you’ll see the historic YMI Cultural Center and on the corner, a little coffee shop. Eagle Street Coffee Emporium moved into the neighborhood last November, pulling up roots from its Wall Street location to join a neighborhood with a rich, African-American history. Owner Teresa Johnson says her mission is to provide a “safe space, where everyone is welcome” and that she hopes the coffee shop will become an integral part of a community on the rise.

And nearby, shops like Stefanie’s Design Studio, a hair salon and spa, and restaurants like Limones and Noble Kava, a unique bar featuring herbal drinks from the South Pacific, have made The Block — as the neighborhood is often called — home. New projects are underway, too: About a block from the Coffee Emporium, a multimillion-dollar, mixed-use development includes renovating old buildings and adding new structures that will house 62 low-income housing units, as well as retail, commercial and community space. The project will make use of the Del Cardo, Ritz and Dr. Collette buildings. It is, said then-Mayor Terry Bellamy in 2012, a dream that’s “almost 20 years in the making.”

The synergy of past and future makes The Block just the right place for Johnson and the Coffee Emporium. As a lover of art, she promotes the creation of art, decorating the shop shelves and walls with local paintings, drawings and crafts. Vintage, secondhand furniture and paintings by children and youths hanging on the walls make the space feel like home. It is a comfortable gathering place for all ages, from teenagers seeking a peaceful place to study, to businessmen and women looking for a quick break in their day, to friends and colleagues having conversation over coffee.

Johnson invites conversation, too, providing a place for support groups to meet. And she dreams of acquiring the space next door and using it as a weekend music venue. The emporium is a cozy, intimate place for people to gather, not only for coffee, but also to engage in creating community.

Johnson remarks that she is “open to being part of the community, hoping that the coffee shop will draw more people down to the area,” especially as The Block undergoes a long-awaited round of revitalization.

Founded in 1893, the YMI Cultural Center has a long tradition of welcoming people, providing support and improving the lives of those who live and work in the Eagle-Market streets neighborhood. George Vanderbilt, who built the Biltmore Estate, funded the construction of the Young Men’s Institute building — initially for the young African-American men working on the estate who lived in the Eagle-Market street area.

The center provided a night school for adults, a Sunday school, a school for children, a bathhouse and a library. It also housed a drugstore, doctor’s office, working rooms, sleeping rooms and a swimming pool. In 1905, the YMI board of directors raised enough money to buy the building so that, throughout the years, it could continue to be an integral part of Asheville’s African-American community. These days, the historic building remains a place used for events, exhibitions and meetings. It has become a center for multicultural collaboration serving all of Asheville.

Among this rich, diverse and inspiring history, Eagle Street Coffee Emporium has found its new home, says Johnson, who signed a long-term lease.

In the mid-1970s, “urban renewal” swept through the Eagle-Market streets neighborhood neighborhood. About 70 homes and businesses were destroyed, devastating the community. According to Stephanie Swepson-Twitty, CEO of Eagle Market Streets Development Corp. since 2008, families were torn apart and many were left homeless. It became a community in need. And over the years, many buildings have remained vacant, despite ongoing efforts to revitalize The Block.

Meanwhile, the Eagle Market Streets Development Corp. was founded in 1994, under the leadership of Dr. John H. Grant and the patronage of Mount Zion Missionary Baptist Church. The goal: Turn things around. The nonprofit’s mission has remained focused on developing people, property and businesses, as well as promoting economic and social justice for all. In 2010, the EMSDC forged a new partnership with Mountain Housing Opportunities. It was “the most productive relationship that The Eagle Market Streets Development Corp. had ever forged … a divinely inspired partnership,” says Swepson-Twitty.

In 2012, the city of Asheville gave the go-ahead for the Del Cardo project, and after raising nearly $12 million from public, private and not-for-profit sources, the EMSDC and MHO broke ground, estimating that the housing component will be near completion by December 2014 and the commercial spaces in 2015. Businesses already lined up for the space include Visit and Venture, The Support Center and the new Eagle Market Streets Development Corp. offices. The desire is to both preserve the past and prosper in the future, says Swepson-Twitty.

Johnson hopes that Eagle Street Coffee Emporium will be a welcoming place in the community. She remarks, “I have already felt welcomed and become a part” of this historical area. Johnson says that she is honored to watch and participate in the renewal of such a diverse and inspiring part of Asheville’s history.

Liz drinks, photographs, and writes about coffee, promoting the Swedish idea of fika and checking out local coffee shops in Asheville, while dreaming of making a world tour of cafes and coffee farms. Contact her at thefikagirl@gmail.com or visit her blog at www.belovelive.com."
View all posts by Elizabeth Reynolds McGuire →