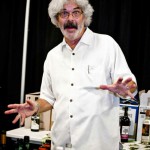 In vino veritas: There’s plenty of wine to get excited about at the Asheville Wine and Food Festival Grand Tasting this year. Photos by Jennifer Haynes 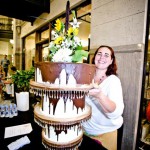 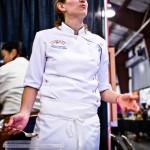 All buttoned up: Katie Button may offer food and model chef wear this year.

Perhaps instead of “Paris of the South,” we should consider “Napa Valley of the east coast.” With our growing reputation for wines, local-spirit cocktails, bean-to-bar and handcrafted chocolates, an exploding brewery scene and world-class dining options, it wouldn’t be completely inaccurate. In celebrate of our area’s edible bounty, the Asheville Wine and Food Festival is back for a third year. The three-day food fête continues to keep pace with the WNC food and beverage scene’s exponential growth; this year sees the addition of a mixology competition, even more local food and wine, a culinary-inspired fashion show and an expanded, central location.

The AWFF kicks off on Thursday, Aug 23, with the final Chefs’ Challenge competition at the Century Room at Pack's Tavern; continues on Friday with the celebration of all things confectionary, Sweet, at the Grove Arcade; and culminates on Saturday with the AWFF Grand Tasting to be located at the U.S. Cellular Center this year (read on for specifics on these events).

Whatever your opinion on the Civic Center’s new name, it's hard to argue with its location. "The most exciting thing to me is the ability for people to come out of the festival and walk out into our beautiful city and enjoy all of the restaurants … enjoy the sights and features of the city itself without having to get back in the car and drive anywhere," says event director and founder Bob Bowles. That's a plus after sampling the local beers, hundreds of regional, national and international wines as well as offerings from the growing number of craft distilleries in our region (by the way, hotels within walking distance of each event are still accepting reservations).

"You're just going to be stunned by the number of wineries, restaurants and food producers you see," says Bowles of this year's lineup. Though event organizers are still accepting new vendors, the festival has already recruited 35 wineries from vineyards as near as Yadkin Valley to more distant areas like Chile. Oh, and there will be some rock stars in the mix, too — and we don't just mean the chefs.

Here your fun food fact of the day: Paul Cullen, the bassist for '70s supergroup Bad Company, has his own private-label wine under the name Sonata. He'll definitely be at the event but, sadly, his mullet will not. (Cullen is closely shorn and creating jazz these days; learn more about him at http://www.UnpluggedandUncorked.com.)

Sixteen restaurants and caterers will be present at the Grand Tasting, as well as 35 to 45 assorted food producers, Bowles says. Regional chefs will offer cooking demonstrations at various stations around the venue. Blue Ridge Food Ventures, a local production facility for small entrepreneurs who want to get into the food business, will offer a marketplace with many of their goods for sale, some of which are difficult to find outside of the facility.

"There's so much happening this year," says Bowles. "We've always wanted to have bartenders and we've always debated who were the best bartenders in Asheville." This year, à la the chef competitions, the Grand Tasting introduces the Local Spirits Mixology Competition. (That takes place on Saturday, Aug. 25 at 2 p.m. at the U.S. Cellular Center.)

Competitors will mix up creative cocktails using locally distilled spirits, including Troy & Sons moonshine, Cardinal Gin from Southern Artisan Spirits and apple brandy from Carriage House Brandy, among others. A panel of food writers and representatives from local restaurants will select the best.

Interested in participating in the competition? Visit http://www.ashevillewineandfood.com, click on "activities," and fill out the entry form along with your experience in the world of mixing cocktails (deadline for entry is Aug. 1)

Not all products at the Grand Tasting will be edible; local fashion designer and A-B Tech culinary student Sandra Harvey will showcase her wares during the Fashion and Food Runway. For the first time at the AWFF, models will strut their stuff on a catwalk, exhibiting fitted, back-of-the-house culinary finery, as well as the type of evening-wear you might don for a fancy dining event.

Also featured will be milliner Simone Bernhard, who will show her chef hats and others decorated with food-inspired motifs. Mary Lou of Spiritex will add her elegant evening attire.

Models include Susi Gott Séguret (director of the Seasonal School of Culinary Arts) and Adam Hayes, executive chef at the Red Stag, as well as his wife, Ashley, and Wendy Gardner, wife of chef Nate Allen of Knife & Fork. Cúrate’s Katie Button (if she can pull herself away from cooking and serving) will also model.

Séguret, who's also judging in the Chef's Challenge finale on Aug. 23 (and has participated in the AWFF since the beginning), says she’s excited to witness the growth of the festival year after year.

"It's getting bigger,” she says. “And the word is getting out farther and farther about North Carolina wines," she says. "I think that's incredible, North Carolina having been, for so long, a tobacco-growing [part of the] country that's associated with Deliverance, kind of,” she laughs. Séguret hastens to add that she loves the “real” North Carolina — it’s where she grew up. “But since my passion is wine and food too, and North Carolina can now be associated with wines that are coming into their own, and truffles, too, it's fantastic. It all goes together in a package with the great farmers markets, all the restaurants that we have … it fits that package of the appreciation of the finer things in life.”

Tickets to the Asheville Wine and Food Festival Grand Tasting and other events are available at http://www.ashevillewineandfood.com. The Grand Tasting takes place on Saturday, Aug. 25, from 1:30 until 5 p.m. General admission tickets are $45, VIP tickets are $65. All passes include plenty of sipping and tasting. And, of course, there’s unlimited shopping. Proceeds go to benefit ASAP’s Growing Minds program.