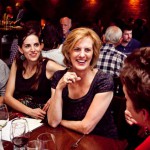 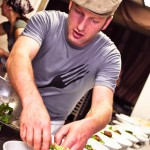 Dishing it out: Chef Nate Allen from Knife and Fork in Spruce Pine. Allen will compete in the Chefs Challenge Grand Finale against chef Michael Gonzalez of Bistro at Biltmore. 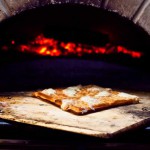 A taste of WNC: The Grand Tasting will showcase all things comestible in the Asheville area and beyond.

Do you consider yourself a devout fan of the Asheville food scene? WNC Magazine’s Asheville Wine and Food Festival may have the ticket for you. The Grand Tasting, to be held on Aug. 13 at the Expo Center near the Asheville Regional Airport, is back, bigger and sporting a newly designed flow to better accommodate the crowds of foodies expected to attend. Upward of 100 vendors will be there, offering a wide array of edible samples from local meats to mustard and wine from regional and far-flung vineyards. Expect to find live entertainment from local musicians like Ben Hovey and aerial artists, plus food and wine workshops led by local culinary authorities.

The celebration is the cornerstone of WNC Magazine’s Asheville Wine and Food Festival. Organizers of the event, which include Slow Food director Bob Bowles and WNC Magazine marketing manager Ayana Dusenberry, hope to see the AWFF eventually become a framework for year-round WNC food happenings. They envision wine dinners and culinary tours throughout the year, helping to further promote the “foodtopia” of our area as a prime destination for gourmands.

The WNC Chefs Challenge is one element of AWFF’s extended feast. The series of cook-offs began in the summer of 2010, in the bottom floor of the now-defunct Flying Frog. This year, the Iron Chef-style battles got a breath of fresh air when they were moved to a new venue, the more befitting modern-Italian Cucina 24, a Wall Street restaurant owned by Brian Canipelli. The Chefs Challenge Finale, showcased again this year at the Grand Tasting, marks the final throwdown between the two remaining teams. This year, the competition plays out in its own separate tent outfitted with state-of-the-art sound and video equipment in front of an audience.

The two competing teams, one led by chef Nate Allen from Knife & Fork and the other led by chef Michael Gonzalez of Bistro at Biltmore, will fight head-to-head in the cook-off, competing for a panel of judges that includes writer and cooking teacher Mark Rosenstein as well as Cucina 24’s Brian Canipelli. Also on the judges’ panel is Nathalie Dupree, a James Beard Award-winning chef and cookbook author; John Batchelor, Greensboro News and Record‘s food critic and this (quite excited) writer.

The Chefs Challenge tent will also be equipped with a wine bar with full pours for sale.

How Sweet it is

The food-filled weekend will begin in earnest on Friday, Aug. 12 with a confectioner’s ball of sorts, a fête the organizers have dubbed “Sweet.” How many towns have as many chocolatiers per capita as we do, or gourmet ice cream parlors for that matter? This event highlights the rather surprising array of creative offerings for which our local sweet-makers are known. Local distillers will be on hand offering cocktails from craft liquors, including moonshine from Troy and Sons (located in the Highland Brewing Company in East Asheville) and the almost-floral gin from Cardinal Distillery in King’s Mountain. Plenty of wine and bubbly will also be on hand for those that eschew liquor. But the centerpiece of the event will be the sweet treats of local purveyors and craftspeople like Jael and Dan Rattigan of the French Broad Chocolate Lounge, Jodi Rhoden of Short Street Cakes and Greg and Ashley Garrison of the Hop Ice Cream Cafe. Ashley, known by some as the “ice cream ninja,” makes an array of flavors with frequently interesting additions like salted-caramels handmade by the local pastry-mavens at Crème Patisserie and Confectionery (who will also be in attendance at Sweet).

“It’s a good showcase of what we have to offer locally,” says Dusenberry. “The passion that everyone has for doing things in this town in a very unique way, using local ingredients and being really creative, I think that everyone really steps each other’s games up. People love that.”

Presenting these treats in a pre-event soiree, says Dusenberry, is part effort to draw out the party, part effort to highlight a microcosm of our food scene that might otherwise get lost in the 100-odd vendors at the Grand Tasting. “We just wanted to grow the festival. We thought about all of these pastry chefs and lovely chocolatiers that we have,” she says. “We know that they can’t really sample for the volume that attends the Grand Tasting.”

An abundance of eats and drinks

Every winery involved in the Grand Tasting (a roster that includes Brushy Mountain, Lake James and South Creek) will offer tastes, as well as considerable discounts on bottles and cases, says Bowles. A bag provided at the front door will have slots for wine bottles, and the festival has also set aside a space for bottle or case pickup in a storage area near the front door. Dedicated oenophiles will also appreciate the addition of full pours offered for purchase (some complained of the standard tasting portions of the wine samples last year).

Restaurants like Cucina 24, The Market Place and Red Stag will offer samples. A special brew area will feature beers from locals like the LAB and Craggie Brewing so people that don’t drink wine can grab a brew. Another culinary educational area of sorts will feature food workshops and wine classes led by Vinsite‘s Les Doss and the Wine Studio of Asheville‘s Jessica Gualano, just for starters. In addition, this year there are VIP passes available that offer access to a private, catered lounge during the event. (See more information about where to get tickets on page 57.)

Outside the front doors of the Grand Tasting, our burgeoning street food scene will be represented by a handful of vendors, including Gabriella Oviedo and her King of Pops gourmet ice-pops, Jeremy Hardcastle with his handmade Hardcastle Hot Dogs and Suzy Phillips with her Gypsy Queen Cuisine Lebanese street food. “We wanted to have a nice representation of them at the Grand Tasting without it being too overwhelming,” says Dusenberry.

With so many aspects of our food culture on display, WNC Magazine’s Grand Tasting offers a well-rounded and ambitious attempt at showcasing our area’s rich culinary scene. “Everyone’s going to be blown away this year,” says Bowles. 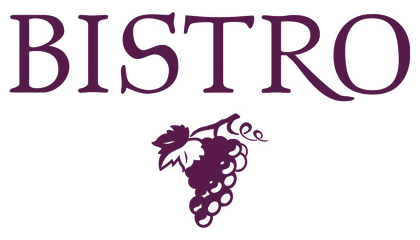