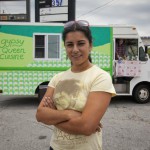 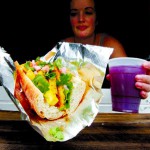 Fast food?: There’s no telling how long it will be until we actually see food trucks downtown; under the new ordinance, food trucks have to get permitted for a spot in which they can park it (no roaming or generators are allowed downtown).

On Tuesday, Sept. 13, City Council approved the presence of food trucks in downtown Asheville, as long as they adhere to certain rules and regulations. Read more about it in the news section.

Since the trucks have to find and be permitted to park on private property, it still could be some time before we see them downtown (and even then, only 10 permits will be issued, and we likely won’t see all 10 downtown at the same time or in the same spot). Until then, Xpress has gathered a list of food trucks, as well as the information to help you find the locations and times at which you are likely to find them — for now, social media and websites are the best resources to help you find their locations. Keep in mind that, due to unforeseen circumstances (like inclement weather or busted generators) and the fact that these restaurants are on wheels, details are subject to change. Also, this is not a comprehensive list of all food trucks in Asheville. If you feel that we’ve missed any, let us know at mountainx.com/dining.

Gypsy Queen Cuisine features creative Lebanese food prepared by Suzy Philips, aka the Gypsy Queen. Phillips supplements the local ingredients she sources with goods she imports from overseas — hard-to-find ingredients like sumac, a tart Middle Eastern spice. Among the dishes on her menu is the falafel that's helped make Phillips locally famous, a fantastic kafta panini and chicken shawarma. Gypsy Queen Cuisine can now be found daily in various locations around Asheville. Check her new website (gypsyqueencuisine.com) for hours and locations.

The Pink Taco Truck is run by Marni Graves, a local architect who formerly lived in Arizona and Mexico. She says those regions have influenced her palate, which she describes as Southwestern with a Native American twist. Graves makes Navajo-style tacos in edible fry-bread bowls that she fills with adobo chicken, green-chili pork, barbecued beef or vegetarian fillings, plus quesadillas, handmade tamales and breakfast tacos for the morning. For now, find the Pink Taco Truck several mornings a week at 143 Charlotte St. (from 7 a.m. until about 2 p.m.), some evenings at the Bywater and on weekends at The Paris of the South Flea Market. Always be sure to check the truck's Facebook page, which is updated frequently and the best source for current information.

The Lowdown Food Truck is operated by Nate Kelly and his wife Cynthia and probably boasts the best pimento cheese in town — which is saying a lot in a Southern city with culinary talent to spare. The barbecue sandwich with pickled okra and slaw is pretty amazing, too, and the local-blueberry iced tea is certifiably addictive. You can find the Lowdown (active on Twitter @thelowdowntruck) Monday through Saturday from 11 a.m. until 3 at the Citgo on Broadway, across from Hillside Street — until they find their downtown spot.

The Venezuelan Food Truck now camps out by The Get Down in West Asheville (1066 Haywood Road), having been booted from its Patton Avenue spot. Sheila and Genaro (aka Rino) Cassano serve a number of arepas and empanadas, and though they offer meaty fare like arepa burgers (beef patties served on simple corn-dough buns for $4) and hot dogs, all dishes can be had vegetarian. “We have the option for the burger, the hot dog and the empanada to be made with vegetarian meat,” says Sheila. Try the blueberry or the kiwi-pineapple shake, made with soy milk, for $3. Check the truck’s Facebook page for details, but (at least for now) the truck operates from 8 a.m. until 2 p.m., Thursday through Sunday on Haywood.

Looking for some healthy vegan and gluten-free fare? You may like Veggie Love. The truck, Vidalia, just recently earned its wheels, so to speak, opening in a new spot at 347 Depot St. in the River Arts District, Sundays and Mondays from 10 a.m. until 7 p.m. Veggie Love can also be found at the Wednesday market at the French Broad Food Co-op in downtown Asheville. Check out the truck's Facebook Page or visit the Veggie Love blog (http://veggieloveasheville.com) which features a "find us" tab that leads to a page with an embedded location tool that shows where the truck is located when it's open for business.

Though food trucks have rolled onto the scene only recently, Jerry Kozel has owned and operated his since 2007. Katya Castillo operates one of his trucks in the parking lot of the Home Depot on Fairview Road in Oakley. An egg sandwich — we're talking local eggs, including eggs that Castillo harvests from her own chickens — costs only $2.99 (with bacon, sausage or ham). The coffee is organic, and made by the cup. Espresso drinks and fresh-made lemonade and other juices are also available. Burgers and cheesesteaks are made with all-natural Hickory Nut Gap meats. We highly recommend you check this truck out the next time you’re shopping for roofing nails or potting soil. It's open on weekdays, from 7 a.m. until 3 p.m.

The Eatbox food truck, run by Meg Alt and Molly Clark, mostly serves meatballs, but also has a rotating menu which includes gourmet burgers and specials based on ingredients obtained from local farms. Meat is sourced from Hickory Nut Gap Farm whenever possible. The truck works the festival circuit quite a bit, but has been showing up frequently at The Get Down at 1066 Haywood Road in West Asheville. Visit their Facebook page for more information.