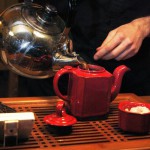 Tea for two (or three): In its many forms and incarnations, Camelia sinesis invites ceremony and soothes the soul. photos by Jonathan Welch 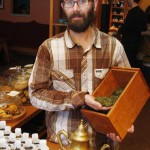 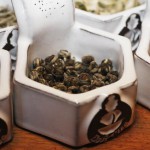 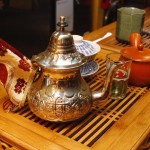 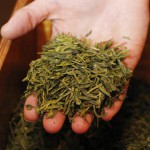 In Asheville, it’s easy to find good health in a cup of tea, whichever variety you crave. But which tea to choose?

In other words, savoring a tea (and describing it) can be a bit like picking a good wine. First, all tea varieties come from the same species, Camellia sinesis (herbal “teas” are really infusions of flowers, leaves and roots from various plants). In green teas, the leaves are plucked from the tree and then immediately dried. Since there is very little oxidation, these teas appear to retain the most health-promoting properties, and they’re usually visibly green. White teas are plucked from the bush, then laid in the sun to bring the juices to the surface before they are heated. Oolong is squeezed and tumbled before being baked, and black teas are tumbled and laid in beds to oxidize for longer periods than other teas, then dried at high temperatures.

“Many of the heath benefits of tea come from the phytonutrients, specifically, [the] flavonoids” says Sarah Elderkin at Café Ello on Haywood Street.

According to The Tea Association of the USA’s website, “Flavonoids are believed to have antioxidant properties that work to neutralize free radicals, which … over time, damage elements in the body and contribute to chronic disease. Flavonoids may also help reduce the risk of cardiovascular disease, heart attacks and stoke due to their impact on lipid oxidation and blood vessel functions.”

Since the oxidation process may affect flavonoids, most research focuses on green teas. Scientific studies, natural-health experts and nutritional books all seem to agree that tea may help reduce the risk of certain types of cancers by promoting programmed cell death and inhibiting the rate of cell division. Tea appears to help prevent cancers of the stomach, small intestine, pancreas and colon; lung cancer; estrogen-related cancers, including most breast cancers; and prostate cancer.

Of course, as with coffee, brewing technique really does matter. Select only the best-quality teas, say both Snavely and Elderkin. “The better the pluck, the more backbone and flavor,” says Snavely.

That’s to say, the “pluck” — how the tea was picked and from what part of the bush — affects its flavor.

“The best is an ‘imperial pluck,’ which contains the bud and the leaf directly under the bud. A lesser quality ‘average pluck’ is what comprises most bagged tea,” Snavely continues.

To capture the essential oils, flavors and maximum health benefits, it’s also important to steep your fresh tea with a lid. Special brewing tools include the brew-in mug used at Café Ello, an earthenware vessel — known as an aiwa — at Dobra, a tea pot as seen at The Village Tea Room or a French press, which is used by several coffee shops.

Yet, according to one local tea aficionado, the health benefits may be as much about the ceremony as it is about the plant. “The ceremony of tea forces you to slow down, which can change brain chemistry, nervous system function, and many other components of health,” says Snavely.

The Indian, Chinese and Japanese traditions are honored with a bohemian-style verve at Dobra, where folks gather to relax, engage in progressive conversation and taste the teas of the world. Across town at the Village Tea Room in Biltmore Village, the English tradition prevails with afternoon tea (complete with cakes and finger sandwiches).

“Whether it’s the meditation or the plant, I’m not sure,” says Elderkin. “Regardless of tradition, with a hot cup of tea steaming in front of you, you begin to experience a sense of inner calm and balance.”

As with coffee, however, tea contains varying amounts of caffeine: Green tea has about 10 to 20 mg of caffeine per 1 gram dried matter, while black tea has about 22 to 28 mg — compared to coffee’s average of 80 mg. The brewing time will affect caffeine content.

— Jacquelyn Dobrinska is an Asheville-based writer and yoga therapist working on an advanced degree in health.