Joining demonstrators worldwide, hundreds of local teenagers, children and adults walked out of class and work to participate in the Global Climate Strike on Sept. 20. Gathered in front of Asheville City Hall, the activists held a climate protest and “die-in” inspired by the work of  16-year-old Swedish environmental activist Greta Thunberg.

“When I was 14, I searched all around me for a leader to stand up for what is right. I didn’t find one,” 17-year-old Dean Wortas told the crowd of about 300. “I realized that I must find a leader and if I can’t find one, I must become one myself.”

Asheville’s demonstration was led by local nonprofits Community Roots and Sunrise Movement Asheville in partnership with the national Youth Climate Strike and Fridays for Future movements.

“We are one of over 5,500 strikes happening all around the world today as part of the global climate strike in hundreds of countries,” Ashley McDermott, a founding member of Sunrise Movement Asheville, told the crowd. “We are here today in the middle of this beautiful day because we are disrupting business as usual because we are in a climate emergency.”

Several young speakers flagged the urgency of the moment while calling on city leaders to increase their commitment to positive change. Asheville’s 100% Renewable Energy Initiative has set as its goal transitioning all city operations away from fossil-fueled energy by 2030, but 16-year-old Kaiya Jade told the crowd that more is needed.

“In order to save my children’s future, we have to cut carbon emissions by 50% in this decade,” Jade said. “We like to think of ourselves as an environmentally friendly city, but our city is not taking this crisis seriously. Asheville’s current plan to cut CO2 emissions only accounts for 1% of our city’s energy — and that’s just not going to cut it.”

Led by the Rev. Amy Cantrell in a “die-in,” scores of participants sprawled across the pavilion at 60 Court Plaza while other volunteers outlined their bodies in chalk on the pavement. With the heat of a clear, end-of-summer day beating down, the demonstrators held their positions for 11 minutes to symbolize the number of years the United Nations’ Intergovernmental Panel on Climate Change has said remain to reduce greenhouse gas emissions by about half to avoid the most catastrophic effects of climate change.

“At the last climate strike, there were 1.4 million youth worldwide with the same urgency, the same ideas we have. Today there will be more,” Wortas said. “We proved that age is not a factor. If anything, our age is an advantage.”

All photos by Brooke Randle. This story is part of Covering Climate Now, a global collaboration of more than 300 news outlets to strengthen coverage of the climate story. 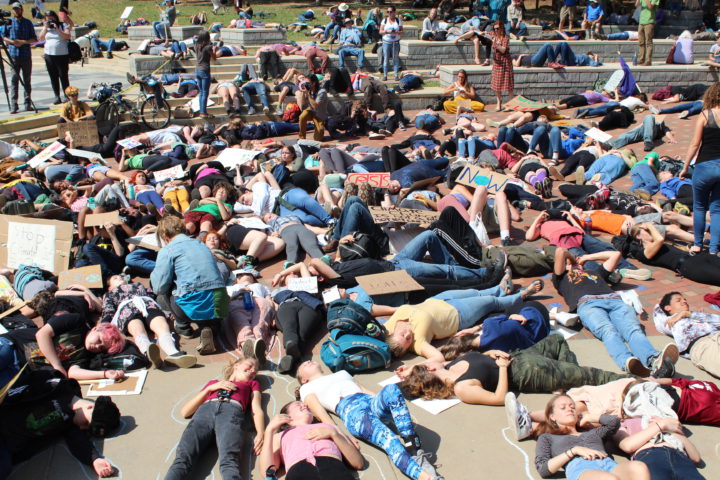 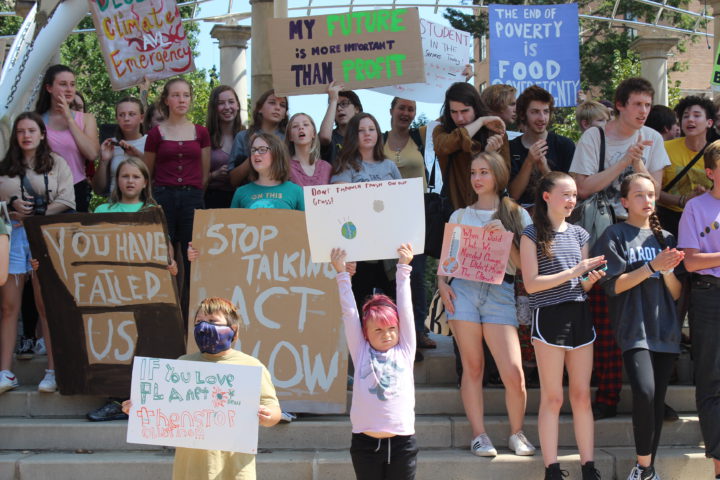 Follow me @BrookeRandle7
View all posts by Brooke Randle →