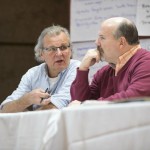 Plans and more plans: Asheville City Council members Cecil Bothwell and Chris Pelly talk during the annual retreat. On the walls behind them are notes from earlier brainstorming sessions. photos by Alicia Funderburk 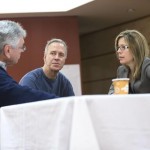 By the time Saturday morning rolled around and lobbyist Jack Cozort stood before local officials, Asheville City Council members were well into their annual retreat. Along with city staff, they’d been huddled in the U.S. Cellular Center banquet hall since Friday a.m., considering the issues facing Asheville.

Retreats like the Feb. 7-8 event are typically where big topics are brainstormed and discussed using what Mayor Esther Manheimer jokingly dubbed “the chaos approach,” laying the foundations for policies that will be revisited later in the year.

But one pivotal moment highlighted a major challenge the city faces in addressing a number of problems: a dysfunctional relationship with the state Legislature that’s been marked by both public and legal battles. Council members asked Cozort how the city is perceived these days in Raleigh.

After a lengthy pause, he noted, “There's a lot of difference between the way you're perceived and the way you really are,” adding that the view held in Raleigh is “bad, very bad” for Asheville. “The perception is that you're a bunch of liberal crazies who don't know what you're doing, and that you're not doing a very good job running your city,” Cozort said, sighing.

“Despite the fact we have the lowest unemployment in N.C.?” responded Council member Chris Pelly.

“They don't know that,” answered Cozort. He added that the city needs to do a better job of telling its side of the story and making legislators aware of its accomplishments, and he wished that the local legislative delegation had attended Friday's session. Manheimer, who worked in the Legislature as legal counsel and researcher from 1998-2002, said more legislation is now being crafted “under cover of darkness,” giving local governments less time to respond or fashion a compromise.

Cozort acknowledged that in the case of the legislation seeking to seize Asheville's water system, the city “was up against the wall,” but in the future, he hopes more cooperation will be possible.

Meanwhile, if the retreat is any indication, Asheville will also face no shortage of local challenges. Here are just some of the issues that emerged as major topics of discussion and possible action.


Friday morning started off with some good news on this front: Staff, citing a recent study, said city government has been far more productive than comparable local governments across North Carolina in creating affordable housing units. The same study, however, found that 47 percent of Asheville's population is “rent-burdened,” meaning that housing costs and utilities consume more than 30 percent of their income.

“We've got firefighters and police officers that can't afford to live in the city,” said Vice Mayor Marc Hunt. He suggested revising the city's rules to allow greater density in more parts of town, an idea that other Council members, particularly Gordon Smith, have also supported. Other ideas that came up included a “land bank” to reserve key properties in certain areas and waiving fees for affordable housing developments up front, rather than giving developers rebates later.

Several Council members voiced strong support for Sunday service and extended hours for the city's transit system. These, noted Smith, are major goals of both the ridership and the local business community.

The People's Voice on Transportation Equality, a grass-roots campaign to overhaul the existing system, recently made Sunday service a top priority.

However, Council member Cecil Bothwell questioned whether that would be the best use of public funds, given the city’s current fiscal constraints. Council member Jan Davis sounded a similar note.

Hunt raised a whole new area to be added to the city's strategic plan: a serious push to solve the “deeply entrenched cycle of poverty,” especially in public housing.

Specifically, Hunt wants the city to take a more active role in working with the Housing Authority and the Asheville City Schools to “disperse pockets of poverty” and improve public education.

Bothwell called the problem “a really gnarly knot” that’s bound up with larger issues of the war on drugs and the prison system. “Middle-class people in Montford go buy drugs from poor people, but they aren't the ones going to prison,” he noted.

One way to address those concerns would be to install more security cameras, which both the Police Department and city staff had flagged as a priority. Bothwell said he’s “generally against surveillance on civil liberties grounds,” but if cameras placed in specific “graffiti hot spots” or at intersections where speeding is common could catch criminals, it might be something he could support.

Smith, however, sounded more doubtful, noting that he has “a lot of concerns about surveillance. I'd need to know a lot more.”

In the coming year, staff will take these ideas and priorities into account when crafting the city's budget and bringing proposals before Council.