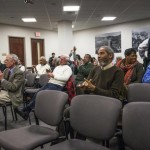 ‘Long overdue’: Supporters of the newly-formed African-American Heritage Commission applaud at its unanimous passage by the Buncombe County Board of Commissioners. Photos by Alicia Funderburk 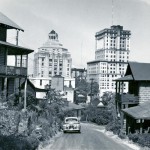 A PLACE IN THE CITY: This 1960s-era view of City Hall and the Buncombe County Courthouse was shot in the East End neighborhood, one of several vibrant African-American neighborhoods whose history the new City-County African-American Heritage Commission seeks to preserve. Photo courtesy of the N.C. Collection, Pack Memorial Library 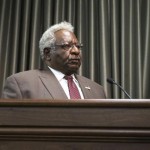 ‘A history that is beyond reproach’: Marvin Chambers, speaking on behalf of the commission, asserted that Asheville’s African-American community has a proud history that more people need to know about. Photo by Alicia Funderburk

Much attention has been paid to Asheville’s long, rich history, yet there are huge gaps in the story that’s usually told. On the city’s streets and in outlying areas, African-American residents built their own businesses and civic organizations into vibrant communities, raised families and buildings, masterminded a public school system, and played a key role in the city’s growth. They also planned, organized and fought for civil rights, often at considerable personal risk.

In earlier times slaves, whose labor constructed many local landmarks, were sold on the courthouse steps, within sight of where Ashevilleans now relax and play. Indeed, some of the very people whose names grace local road signs owned slaves (see “Bought and Sold,” April 9, 2013, Xpress).

Yet this history, and the vital contributions of the many African-Americans who helped build this city, are mostly unknown to today’s residents, largely missing from the plaques and markers erected to inform both locals and tourists — and from the popular image of Asheville that’s presented to the wider world.

“When you look at what's been contributed by this city and the people here, you would be in awe,” Marvin Chambers told the Buncombe County commissioners Feb. 4, as they were preparing to vote on establishing a City-County African American Heritage Commission. City Council had unanimously approved the idea on Jan. 14.

“Asheville has a history that is beyond reproach compared to any other city in this state,” continued Chambers, speaking on behalf of a group of proponents who, for more than a year-and-a-half, have planned and advocated for a joint city/county commission that would help preserve and promote local African-American history.

“As you make this decision, I want you to take a moment and think of the history that's just a stone's throw from here.”

Chambers was a key member of the Asheville Student Committee on Racial Equality during the city’s civil rights struggles in the 1960s. Along with Viola Jones Spells, Al Whitesides and other leaders, Chambers fought for civil rights both locally and throughout the region; today, the local businessman remains active in a number of civic organizations.

“I read about Ashe and I read about Vance and many others,” he points out. “But you don't read anything about the black Americans who contributed things here.”

At a time when schools were still segregated, Chambers remembers his teachers telling the story of Haitian revolutionary Toussaint L'Ouverture and his global impact. His deeds, as well as those of local figures like E.W. Pearson and Isaac Dickson, inspired the young student.

“These were the things we heard when we assembled,” Chambers explains, adding, “This is why we should be proud of who we are. These things are not taught to people today.”

Many local folks don't know that prominent civil rights leader Floyd McKissick was an Asheville native, he notes. Nor do they remember the heroism of many local African-American veterans.

About a year-and-a-half ago, Urban News Publisher Johnnie Grant and Deborah Miles, the director of UNC Asheville's Center for Diversity Education, invited Chambers and others to start brainstorming ideas for a commission that could begin to recify this lack of recognition.

Chambers, himself an Asheville native, says he feels a particular need to make younger generations aware of a history that's in real danger of being lost.

“I've seen Asheville change,” he says. “These are the kind of things people need to know.”

In the ’70s, Asheville’s black communities were decimated by highway construction and “urban renewal” that demolished people’s homes, rending the social fabric and disrupting the transmission of the kinds of stories that Chambers and his peers learned from teachers and family members. Interstate 240, he notes, struck many deeply rooted black communities in places like Haw Creek, Hill Street and West Asheville, including the Burton Street area.

“All those changes were made in and around the black community,” Chambers points out. “These were people who owned their own homes. My uncle lived on Hill Street, owned his own home. When the highway came through, it took his home, and he spent the rest of his life in an apartment.”

Numerous speakers, including local leaders, members of the public and representatives of the YMI Cultural Center, the NAACP, the WNC Historical Association and the N.C. Department of Cultural Resources, voiced support for the Heritage Commission at Buncombe commissioners’ Feb. 4 meeting.

The focus wasn’t solely on the past: Some speakers emphasized the commission’s importance for the city’s future.

“The biggest tourism centers for Asheville are Atlanta and Charlotte, which both have the largest historically African-American communities in the South, and they are increasingly prosperous,” said the Rev. James Lee, a local minister who’s also the workforce development outreach coordinator at A-B Tech. “Cities such as Charlotte, Charleston, Birmingham, just to name a few, have created jobs through the development of strong storytelling centers.”

And Marilyn Bass, who was Asheville’s first minority affairs director and has remained active in related efforts, said the hunger among city residents of all races to learn more about this history is evident. “I taught about this at the Reuter Center, and my class did not look like me, and there was a long waiting list,” she recalled. “This is not about educating only youth that look like me.”

After hearing from these and other speakers, the Board of Commissioners unanimously approved the new group. City Council and the county commissioners will each select three members, and those six appointees, in turn, will choose three more members to round out the Heritage Commission. In the coming months — according to the resolution passed by both local governments — the commission will develop a plan to “identify, create, encourage, promote and implement projects that will recognize, increase and expand the awareness of the contributions of African-Americans throughout the city-county area.”

As for determining specific first steps, Chambers says that will be up to whoever gets appointed. “Young people especially, black and white, need to know that there are people who have made these contributions, economically and socially,” he emphasizes. “What you don't understand, you build a resistance to. The same thing applies to people: They need to understand each other.”