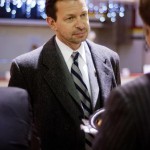 “A district or ward system protects the diversity of a community.” — Rep. Tim Moffitt Photos by Max Cooper 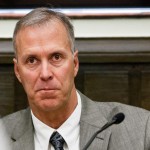 “Legislators that do not represent our citizens initiating dramatic changes to how Asheville elects its Council members … conflicts with fundamental principles of self-governance.” — Asheville Council member Marc Hunt 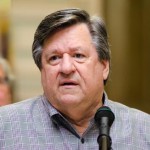 “I don't think you accomplish anything by districts in the city if you do it just to mess with the current [Asheville] Council members.” — Sen. Martin Nesbitt

A June 3 email from Rep. Tim Moffitt to Asheville Mayor Terry Bellamy revealed a plan that has city officials and some residents up in arms.

"In regards to district elections and moving city elections to general election cycles,” Moffitt wrote, “it would require all seats subject to this year’s election to be extended for an additional year. What are your thoughts, since it would apply to you?" The email is part of a larger haul Xpress obtained June 6 (see "Carrot and Stick," June 26 Xpress).

Rumors had been flying for months that Republican state legislators wanted to unilaterally change Asheville's electoral system. Moffitt drafted such a bill in March and sent it to Bellamy in April, though she maintains that she never saw it. Together with Moffitt’s email, the draft bill (which he never filed) raises the possibility that this year's City Council and mayoral elections could be canceled, with the four whose terms are expiring simply continuing in office for another year. Besides putting municipal elections on the same schedule as state and federal races, which might improve voter turnout (see “How It’s Done in N.C.”), this would allow time for a switch to district elections.

Neither local officials nor any groundswell of public sentiment has requested such a change, which, in concert with a forced switch to district elections for the Buncombe County Commissioners in 2011, amounts to an unprecedented overhaul of local elections by state fiat.

But Moffitt, who appears to be the driving force behind the idea, asserts: “Council is once again trying to politicize something that should be discussed in the community. I do believe that a district or ward system protects the diversity of a community.” He also maintains that since elected officials tend to favor whatever system put them in power, “It falls on the state to intercede and do what’s in the best interest of the citizens.”

The politics of voting

The idea of district elections has popped up periodically over the years, though it’s not been widely discussed (Xpress did include it in candidate questionnaires). City Council instituted the current nonpartisan system of staggered four-year terms in 1997 in order to maintain continuity while integrating new members. Every two years, the top three vote-getters citywide are elected to Council; every four years, the mayor is elected in a separate race. In his email response, Hunt took issue with the fact that while Moffitt seems prepared to change election systems over the heads of local officials, his draft legislation leaves it up to them to draw the district boundaries, albeit with state approval.

In 2011, despite unanimous opposition by the Buncombe County commissioners, state lawmakers ordered a similar switch at the county level (see “Done Deal”). Last year, in the first election under the new system, Republicans made major gains, even though almost 60 percent of county voters cast their ballots for a Democrat. State Rep. Nathan Ramsey, who served as chair of the Buncombe County Board of Commissioners from 2004 to 2008 but was defeated by David Gantt in an at-large race in 2008, said, "District elections have worked, in my view, pretty well in the county."

Hunt and other Council members have said they’d be open to putting the idea before the voters if there were demand for it. Moffitt, asked why his bill didn’t call for such an approach, simply said, “We're not a referendum state.” But state law does allow local electoral systems to be changed by referendum, including those initiated by citizen-led petitions. Historically, such fundamental changes have almost always resulted from either requests by local officials or a public vote.

Some city officials and other observers have called Moffitt's proposal a simple power grab, particularly since, with the deadline for introducing new legislation already past, he'd have to introduce the change as an amendment to another bill for it to be considered this year.

That, too, has drawn the ire of Hunt and other Council members. “Legislators that do not represent our citizens initiating dramatic changes to how Asheville elects its Council members … conflicts with fundamental principles of self-governance,” wrote Hunt. “It is especially offensive when initiated with no advance publicity as an amendment to a larger bill in quick-turnaround fashion near the end of a legislative session.”

Local officials aren't the only ones angered by the potential change. “It's just meanness. I don't think you accomplish anything by districts in the city if you do it just to mess with the current Council members,” said longtime state Sen. Martin Nesbitt, a Buncombe County Democrat. “I think that's all that's about.”

A question of representation

To evaluate that claim, Xpress looked at where all City Council members have lived, going back to 2005. By far the largest concentration, including Republicans and Democrats alike, was in north Asheville. Particularly in recent years, a smattering of Council members hailed from West Asheville, with a few from east and south neighborhoods.

But does this mean that north Asheville liberals are unfairly dominating local politics — or simply that the area includes some of the city's wealthiest neighborhoods, and it typically takes money for politicians of any stripe to win elections?

As recently as 2009, there were two Republicans on Council: Carl Mumpower and Bill Russell. Mumpower lost his re-election bid that year and later unsuccessfully ran for Congress. Earlier this year, he threatened to leave the party if the state seized Asheville’s water system. And since 2010, when Russell changed his voter registration to unaffiliated to protest what he called “antics … that demonize people,” Republicans have been absent from the city’s governing body. The last Republican Council candidate, south Asheville business owner Mark Cates, finished fifth in the 2011 elections. Cates supports district elections.

Defending the current system, Council member Gordon Smith said: “Look, this isn't some metropolis here. If you organize and campaign citywide, you can win a Council seat.”

Hunt, too, believes that on the whole, Ashevilleans are satisfied with the system. In his email to Moffitt, Hunt asserts, “At-large representation as now exists minimizes the potential for geographic 'turf battles.'” He also maintains that in talking to hundreds of citizens during his two years on Council, “Not a single city resident beyond yourself has spoken out or approached me advocating a change to districted elections.”

The last time anyone tried to change Asheville's electoral system, the move came from Council itself. In 2007, they narrowly approved a switch to partisan elections, provoking a bipartisan backlash. In a referendum triggered by the Let Asheville Vote movement’s successful petition drive, the change was overwhelmingly defeated.

More than one-third of city voters are unaffiliated, however — a group that includes both voters well to the left of the Democratic Party and ardent conservatives. As a result, Republican candidates have occasionally done well in precincts where Democrats hold a nominal lead.

Historical voting patterns suggest that if south Asheville had its own seat, it could give Republicans a more permanent toehold than they might otherwise have in an overwhelmingly Democratic town.

Although Moffitt hasn’t yet formally proposed his bill, he’s made it clear that he wants to at some point: It’s just a question of timing. That leaves current Council members (and potential candidates) in limbo. The filing period began July 5 and ends July 19; at this writing, four Council candidates and two mayoral candidates have announced. Among the incumbents, Smith and Cecil Bothwell are seeking re-election; Vice Mayor Esther Manheimer is running for mayor.

Meanwhile, over in the Senate, Nesbitt says he's heard more about the potential change from the news media than from his colleagues in Raleigh. “But they [Republicans] don't talk to me much anyway,” he says with a chuckle, adding that Ramsey does, but not Moffitt.

“The purpose of going to districts is to spread out your representation [across different geographic areas], but the city's not that big,” continues Nesbitt. “It's not like you've got a whole lot of territory that doesn't have a representative; that's not a problem in the city.”

Other stories in this week’s cover package exploring the issue of changing Asheville to district elections:

The district advantage: UNCA political science professor Bill Sabo sees definite advantages to district election systems in cities with populations over 100,000. But with Asheville well below that threshold, it’s less clear what making such a switch here might mean. This article also features information on how other cities across the state conduct elections.

Done deal: Lessons from the 2012 district elections: As Moffitt contemplates a move to switch Asheville to predominantly district elections, similar changes he pushed for the Buncombe County commissioners continue to have far-reaching effects.