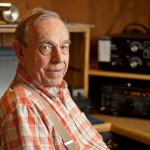 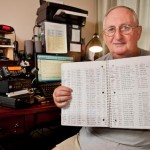 KI4VLW: Randy Harris shows off his log documenting contacts he's made on the radio. 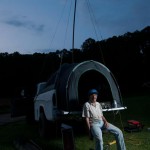 KG4OPM: Marc Huennekens sets up an impromptu radio station in a tent in the bed of his truck on Field Day. 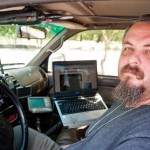 KK4BRD: SKYWARN spotter Paul Tilley uses ham radio to communicate with the National Weather Service when phone lines are down. 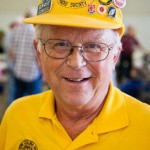 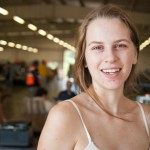 KK4BRE: Virginia Todd became licensed due to an interest in ham radio’s community-service opportunities and usefulness in emergencies.

On a stifling late-June day, a tangle of wires snakes through the open door of the Buncombe County Firefighters’ Training Center. Outside, the sun beats down and the roar of big generators fills the air; indoors, the atmosphere is even thicker, dense with a jarring concoction of radio static, Morse code and urgent voices.

“CQ Field Day, CQ Field Day, this is Whiskey Four Mike Oscar Echo,” Randy Harris says into a microphone, hunched over a folding plastic table. Consisting of just a transceiver and an open laptop, this makeshift radio station is one of many lining the room's perimeter. Cables reach to each one from the generators outside.

“Band's dead,” says Harris, shaking his head; outside, other hams string wires from the trees. The idea is to transmit from bare-bones facilities using emergency power. Running on generators or batteries, all the “rigs” (ham-speak for radios) transmit through simple, homemade wire antennas.

Each station operates on a different band (a specific segment of the electromagnetic spectrum allocated to amateur radio by international treaty), and the operators are hard at work. Competing against stations around the globe, they have 24 hours to log as many contacts as they can.

At first glance, the whole endeavor seems anachronistic. In an age of global communication, pervasive cell coverage and hundred-million-member social networks, what’s the attraction of basic, point-to-point radio communication? Who are these people who call each other not by name but by arcane strings of characters? What exactly are they doing?

Formally known as the Amateur Radio Service, ham radio is at least 100 years old. By definition, hams are amateurs, barred from accepting payment for their services under federal law. “Ham” was originally a derogatory term applied to the tinkerers and experimenters who pioneered the hobby, but today’s operators carry the moniker proudly, knowing their skill set is anything but amateur.

To obtain the call sign needed to transmit legally, an amateur radio operator must be licensed by the Federal Communications Commission after passing a rigorous exam covering electronic theory, radio-wave propagation and the pertinent federal regulations. Other countries have similar requirements.

This rite of passage forges a global community that’s simultaneously exclusive and welcoming. Though universally geeky and proud of their hobby, hams are rarely arrogant or socially awkward: Connecting with other people is, after all, the hobby's basic purpose.”

In Asheville, hams congregate at monthly meetings of the Western Carolina Amateur Radio Society, a Relay League affiliate. Meetings are informal, with lots of inside jokes and doughnuts; the conversation is flush with tech-centered camaraderie and generous use of the NATO alphabet (which assigns a name to each letter to help avoid confusion).

Even off the air, hams employ their own colorful patois. Every male ham is an “old man,” every female a “young lady”; every conversation is a “QSO,” and everyone operates from a messy place called “the shack” (typically a spare bedroom or garage workshop in the ham's house — except it’s not a “house,” it’s a “QTH”).

Adapted from commercial and military radio jargon, this special language further tightens the already-close-knit community. But hams also work hard to avoid alienating newcomers. Attend an event for more than 10 minutes and you'll be enthusiastically encouraged to get on the air (one member even lent me a radio so I could listen in while researching this story).

Accompanying this sincere welcoming attitude, though, is the sense that relying on the hobby's primary demographic — older men with disposable income — just isn’t sustainable, particularly in the shadow of Facebook, smartphones and what old-timers see as young folks’ addiction to easy, frivolous communication. Some members even see themselves as the last practitioners of a dying art.

That fear may be unfounded: Today's ubiquitous tech appears to be re-energizing the long-standing hobby. Pioneering operators have merged radio (an analog medium) with digital communication, and the Internet gives beginners a broad base of support.

“Amateur radio is very much alive and well,” says Bill Morine (N2COP), North Carolina section manager for the Relay League. “An awful lot of young people are coming out and seeing the merger of technologies between computers and wireless applications.”

Nationwide, there are 700,000 licensed hams — an all-time high, he reports. The licensing process is easy, Morine maintains, and ham radio’s staid image is no longer accurate.

“These older gentlemen who are doing traditional Morse code or voice applications [are] continuing to do so,” he explains, adding, “We're also seeing a lot of young people who are coming in and doing a lot of digital applications.”

Carl Smith (N4AA) represents the old guard. Licensed in 1954 at age 14, the Air Force veteran and retired electronics salesman has logged more than 70,000 radio contacts, many from his home in Leicester. In ham circles, he's a big deal: For the past 15 years, he’s published The DX Magazine, a bimonthly journal for serious hams with long-range ambitions.

“DX” is ham-speak for “long-distance communication,” and for Smith and his readers, “chasing DX” is the culmination of the radio art, requiring Zen-like patience, finely honed skill and luck. These hams go to expensive, sometimes dangerous lengths to reach faraway stations. Whereas some might be content to contact a neighboring state, a serious DX-er aims for places as remote as Peter I Island off the coast of Antarctica. Obsessive operators even embark on “DX-peditions,” transmitting from exotic destinations in hopes of reaching new locations.

The Relay League lists 341 such geographic entities; Smith has worked all of them, and this year, he was inducted into CQ magazine’s DX Hall of Fame — one of only 60 such inductees since 1967.

“The number of people trying to make contacts was horrendous: huge, huge pileups,” remembers Smith. “That was something, trying to get through that mess to get in the log.” Like fishermen crowding into a favored spot, operators worldwide jockey for position when a rare DX station goes on-air.

To break through, Smith uses Morse code, the binary language of dits and dahs pioneered by telegraph operators more than a century ago. Radio operators simply toggle a transmitter's carrier signal off and on, creating a “continuous wave” (“CW” in ham parlance). Occupying a very narrow bandwidth, it’s the perfect tool for punching through static and interference.

Once synonymous with amateur radio, CW now appears austere and elegant to some, tedious and obsolete to others. Basic code proficiency was a licensing requirement until 2007, but thanks to changing international treaties and new technology, the requirement was dropped.

Smith wasn’t pleased, believing the change has cost his hobby some of its cachet.

“To work CW you've got to use a little effort," he explains, fearing ham radio will now descend to the level of the voice-only citizens band, an unlicensed, no-holds-barred radio realm. “The code was that extra step that set you apart."

Harris, meanwhile, works DX without a bit of code. "I don't know if I would have got my license if I'd still had [to learn] the code,” he reveals. “I've lost part of my hearing, and I don't think I could have picked it up.”

In the five years he’s been licensed, Harris has amassed an impressive number of contacts using “phone,” the ham term for voice transmission. “I'm a phone type of guy,” he says. “If I want to talk to somebody, I want to talk to them."

For some operators, service is ham radio's primary purpose, and dropping the code requirement has unquestionably attracted many younger licensees. Eighteen-year-old Virginia Todd (KK4BRE), for example, got involved due to radio’s community-service opportunities and usefulness in emergencies.

“We volunteer a lot,” she says. “We did the bike race for Meals on Wheels and the Shut-In Trail Ridge Run.”

Paul Tilley (KK4BRD) says ham radio is just another communications tool he uses as a SKYWARN spotter. In foul weather, Tilley takes to the road in a truck equipped with a rooftop weather station, using his radio to report conditions to the National Weather Service. In remote areas lacking cell coverage, Tilley's radio has enabled him to give people in the path of a storm time to prepare.

“There are storms that make it past the mountains that don't appear on the radar at all,” Tilley explains. He's had some close calls, including a lightning strike that destroyed his radio, but he stresses that he's not a storm chaser. “Storm chasing in the mountains is extremely dangerous: You can't see the weather coming.”

That's why emergency power is paramount on Field Day. But though the underlying purpose is serious, the event is also a chance for these operators to have some fun.

Watching Smith work CW is a jaw-dropping experience, and he quickly draws a crowd. Even while talking to those around him, he transmits so fast that the individual dits and dahs are barely discernible. Outside, other hams set up antennas in preparation for an all-nighter.

“This is my favorite day of the year,” says Tonya Campbell (WB0VDK) in between transmissions.

And as night falls, Marc Huennekens (KG4OPM) sets up a station in a tent in the bed of his truck. Using an old, tube-driven radio, he plans to log as many contacts as he can before falling asleep.

Back in the training center, the room is thick with Smith's rapid-fire code, open-band static and low voices swapping stories. One old-timer recalls how it feels to be hit by lightning — twice.

After 24 grueling hours, the club has logged nearly 1,000 contacts. Smith alone worked 300 stations, transmitting all night and into the next morning. The allure of ham radio, he explains, is equal parts technical endeavor, community service and fellowship.

“Through ham radio,” notes Smith, “I can go anywhere in the world and know somebody and have a friend. I daresay your cellphone can't do that.”

— To learn more about ham radio, visit http://wcars.org or http://arrl.org.