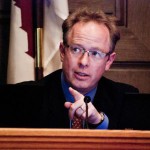 Limited choices: Vice Mayor Brownie Newman asserted that financial concerns and other issues limited city officials options when it came to accepting a deal with U.S. Cellular that would bring funds and, thus, improvements to the 1970s facility. photos by Max Cooper 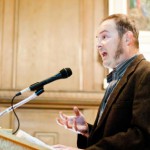 Asheville City Council members wrestled with two conflicting arguments during their Nov. 22 meeting: “We need money to repair the aging Civic Center, and selling naming rights to a corporate sponsor helps achieve that,” versus “Putting a corporate name on a civic facility is betraying the very heart of the city for little gain.”

Council voted 6-1 to rename the Asheville Civic Center the U.S. Cellular Center, though other interested parties have until Dec. 31 to submit an upset bid. Built in 1974, the Civic Center was funded by city taxpayers.

U.S. Cellular has offered $810,000 over five years, though that could grow to $1.35 million over eight years if the city agrees to a three-year extension. In return, the company will get signs facing Interstate 240 and Haywood Street, event and product space inside, and its logo on everything from promotional materials to staff attire.

Sam Powers, who wears two hats as the city’s director of economic development and Civic Center director, touted the deal as part of ongoing efforts to fund renovations the city committed to making in its bid to host the Southern Conference basketball tournament for the next three years. Other staffers concurred.

Newman, however, called the deal an improvement after years of many in the community considering the Civic Center a lost cause. “It's a lot more attractive possibility than it was five years ago,” he asserted. “Naming rights are an appropriate part of an overall financial strategy for the city. This is change, and people can be resistant to that, oftentimes for good reason. But I do think it's important we make sure we have a process where we're getting the best possible value for the city of Asheville.”

Many people opposed to the deal expressed the selfsame sentiment during the contentious public-comment period in the latter portion of the nearly six-hour Council meeting.

“U.S. Cellular wants to ride the coattails of our public investments,” Paul Van Heden told Council. “Not only does selling the naming rights not address the Civic Center's financial needs, it will make it harder to actually address these issues in the future. To fully fund the Civic Center, this body will eventually have to raise parking fees, demand that Buncombe County actually put in some money, a bond referendum or do some serious lobbying on raising the occupancy tax. All these real solutions that will really solve the problem will require that voters instinctively understand the Civic Center belongs to them.”

Van Heden compared the deal to tattooing the U.S. Cellular logo on a daughter's head to help fund her college education.

“It seems like it's free money, but it does come with a price: You're selling more than the name here,” argued Asheville resident Mark Bloom. “Now it's the Civic Center; what next? Pack-Bell Square? McDonald’s Cafeteria, BB&T Classrooms teaching Ayn Rand? It's a very slippery slope. I'm disappointed Asheville's not putting up more of a fight. This isn't Charlotte; we're not Winnipeg. We're Asheville, and this is one of our defining characteristics.”

Amelia Spangler called the Civic Center “the soul of Asheville”; renaming it after a corporation, she maintained, would betray that.

Some speakers, however, supported the deal.

“The improvements we're making for the Southern Conference will allow us to bring bigger-name acts here,” Civic Center Commission Chair Mike Burke told Council. “These conversations go back to 1997,” he noted. “We have before us a tangible action by an internationally recognized firm. They're willing to give us money and technology; there's no cost to the city here. … If you don't endorse this, what does it say to [U.S. Cellular]?”

Former Mayor Lou Bissette also endorsed the deal, saying he recalls facility’s opening and sees the deal as an important step in its revival.

Council member Jan Davis, who's played a major role in brokering various deals for Civic Center renovations, said he believes at least as many city residents support the deal: They just haven't been as vocal as the detractors.

Council member Esther Manheimer said that while she understands opponents' concerns, “When you sit up here, you feel the great burden of two things: making sure we have all the services we need and not raising property taxes.

“To those who say no way should we put the name of any corporation on the Civic Center, you are telling me to raise your property taxes: I'm not going to do that,” asserted Manheimer, though she did say the city should revisit how open the negotiating process was.

Bothwell, however, shot back, calling the specter of raising taxes “a red herring” considering the relatively modest amount of money U.S. Cellular would provide.

Raising a comparable amount, argued Bothwell, “would cost about $5 a year on a tax bill for a $175,000 house; we're not talking about big tax increases. This is not a big deal: The maintenance costs for the Civic Center are above $2.1 million a year,” he continued. “We could add a dollar to parking fees or ticket fees; there's a lot of ways to make this money up without selling the name of our Civic Center.”

Condemning the deal in no uncertain terms, Bothwell challenged the very idea of selling naming rights. “We're in a very different time here than we were in 2001,” he said, arguing that people want corporate influence in government reduced. “Something this central to the city, people need to have a voice in whether we put a corporate name on that insitution.”

Council member Gordon Smith countered that the city has limited options for raising money to fix the Civic Center, given the restrictions on how it can use water revenues and state legislators’ refusal to increase the city's hotel/motel room tax.

In the end, only Bothwell opposed the deal, which will take effect Jan. 1 unless another entity offers the city a sweeter deal.

Council members also:
• unanimously approved closing an unused right of way between Nebraska Street and Nevada Avenue in West Asheville. Eleven of the 13 immediate neighbors requested the closure after another neighbor began tearing down trees in the area.
• narrowly approved The Aventine, a 312-unit apartment complex on Long Shoals Road, on a 4-3 vote. Bothwell, Smith and Newman voted against the project, which is in the city's extraterritorial jurisdiction, citing the lack of affordable-housing units. Because of the close vote, the project must pass a second reading at Council's Dec. 13 meeting.
• heard a report from outgoing ABC board Chair Charles Worley concerning the corruption charges that had led to CEO Curtis Canty’s resignation in September. Worley, a former Asheville mayor, said the board had acted quickly and that the problems concerning credit card misuse and gifts from liquor companies had not affected day-to-day operations. The board, he said, had already put guidelines in place this summer to prevent future ethical lapses.

Bothwell, however, maintained that the entire ABC board had failed in its oversight function and should resign.

10 thoughts on “Asheville Civic Center out, U.S. Cellular Center in”