No charges will be filed against Asheville Police Department Sgt. Tyler Radford for shooting and killing local man Jai Lateef Solveig (Jerry) Williams. Buncombe County District Attorney Todd Williams says an investigation by the State Bureau of Investigation has revealed that Radford acted lawfully and justifiably in self defense.

On a very cold Thursday afternoon, Dec. 15, DA Williams held a press conference in the United States Courthouse in Asheville to announce the long-awaited SBI findings and the actions planned by the DA’s office in response to them.

Earlier in the day DA Williams had met with Jerry Williams’ family to explain his conclusions. The DA opened the press conference by saying, “We do hope that [the release of information] brings them closure. I hope that the manner of Jerry Williams’ death does not overshadow his life.”

The shooting was followed by grief and outrage, and it sparked protests and controversy around police use of force.

The events leading to the fatal encounter between Jerry Williams and the police officer began at Deaverview Apartments a little after 7 p.m. on Saturday, July 2. The period of time between the moment Williams first fired a weapon at one housing complex until he was killed at another was less than 15 minutes. Police revealed little about the events of those few minutes to the public after Williams’ death. Even as questions mounted in the community, the SBI took the reins of a nearly four-month-long investigation to discover and assemble evidence about what happened.

On Oct. 28, the SBI submitted its comprehensive investigation and report to DA Williams. The submission included more than 900 pages of written documentation, hundreds of digital photographs and multiple hours of audio and video recordings. DA Williams then took six weeks to review the case and decide how to proceed.

He announced his conclusion Thursday in what he called an “unprecedented release of information of key facts that informed the decision.” In all the compiled data, he said he found “witness testimony therein that entirely supports and is consistent with officer Radford’s testimony and a wealth of corroborating documentary evidence.” He said he felt the thorough disclosure was necessary because of the national discussion concurrent with the local discussion about police use of force and officer-involved shootings. He also released supporting documentation, audio and images to the public, which can be found here.

Prior to D.A. Williams’ decision, the incident received attention, and in some cases generated outrage, throughout the community. The events surrounding Jerry Williams’ death also directly preceded a review of the department’s Use of Force Policy, which involved community organizations. Read more in previous Mountain Xpress stories:

According to the summary provided by DA Williams, Radford encountered Williams on the way to a call for service at Pisgah View Apartments where, according to eyewitnesses, Williams had discharged a rifle while attempting to recover a cellphone from another individual. He left the scene in a white 1990 Chevrolet Caprice, which witnesses mistakenly identified as a Cadillac. Radford reported pursuing Williams at speeds exceeding 70 miles per hour. The pursuit ended at Deaverview Apartments. As Williams exited the car and appeared to make ready to shoot the police officer, Radford shot him with a rifle.

Evidence to support Radford’s testimony came in the form of statements from two passengers riding in Williams’ vehicle moments before his death, referred to in the report as Jane Doe 1 and Jane Doe 2. The front seat passenger, Doe 1, was in a relationship with Jerry Williams and remained in the car throughout the event, according to the report. Doe 1’s one-year-old child rode in a car seat behind Williams.

According to the synopsis of the interview with Doe 1, who was in the front seat when Williams was shot next to the car, she stated that when the vehicle stopped, “the officer was giving commands to ‘put their hands up,’ however, no one complied with the commands …” and “‘as soon as he [the officer] said that, he [Mr. Williams] went and reached for the gun.’ When Doe 1 realized Williams’ intentions, she said she grabbed the gun ‘because [she] seen the butt of it’ to prevent him from gaining control of the weapon. She stated that during the struggle over the gun she told Williams, “My baby’s in the car, just stop, just stop, just stop.”

Doe 2, who was riding in the back seat with the infant, removed the child from the car as Doe 1 struggled with Williams. Doe 2 exited through the rear passenger-side door and carried the child into some bushes several feet away.

Interviews with these two witnesses were conducted immediately after the shooting happened, even before Radford’s formal interview, which took place the next morning. According to Doe 1 and Doe 2’s accounts, over the course of the incident they both asked Williams to stop the car before they reached Deaverview. Both said they heard him remark that he was “not going to jail,” or “not going back to jail.” 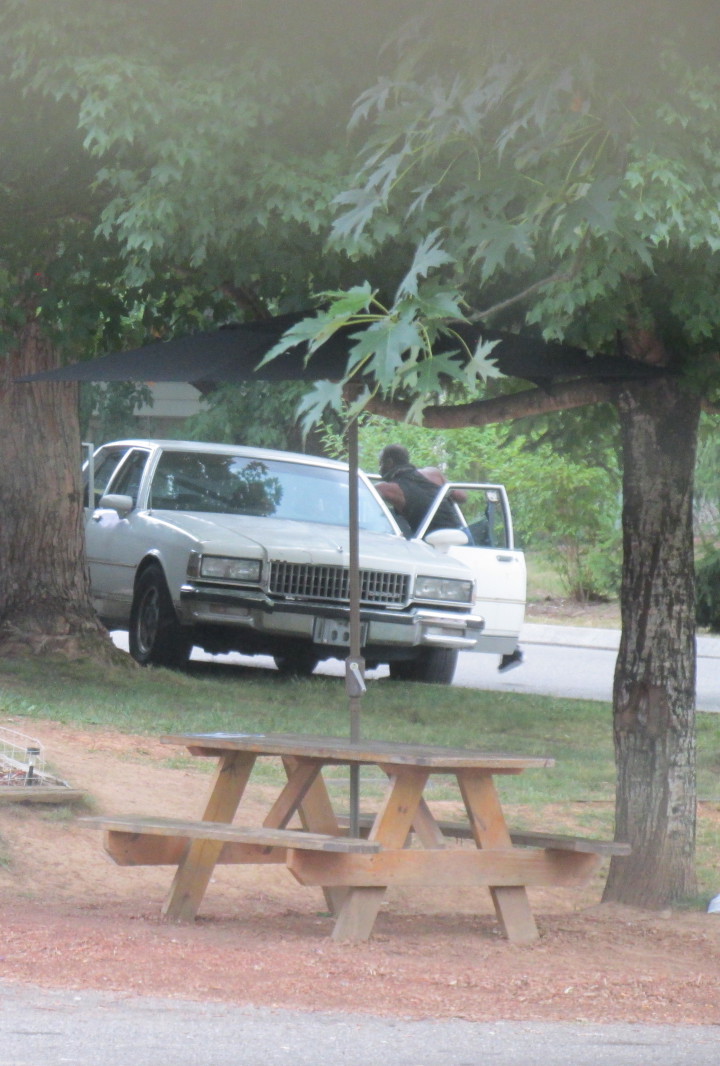 This image, captured by a bystander seconds before Jerry Williams was shot, shows Williams exiting his car. Also visible is the passenger side seatbelt extending across the view through the car, likely from Jane Doe 1 leaning across the vehicle. Photo courtesy of the District Attorney’s office 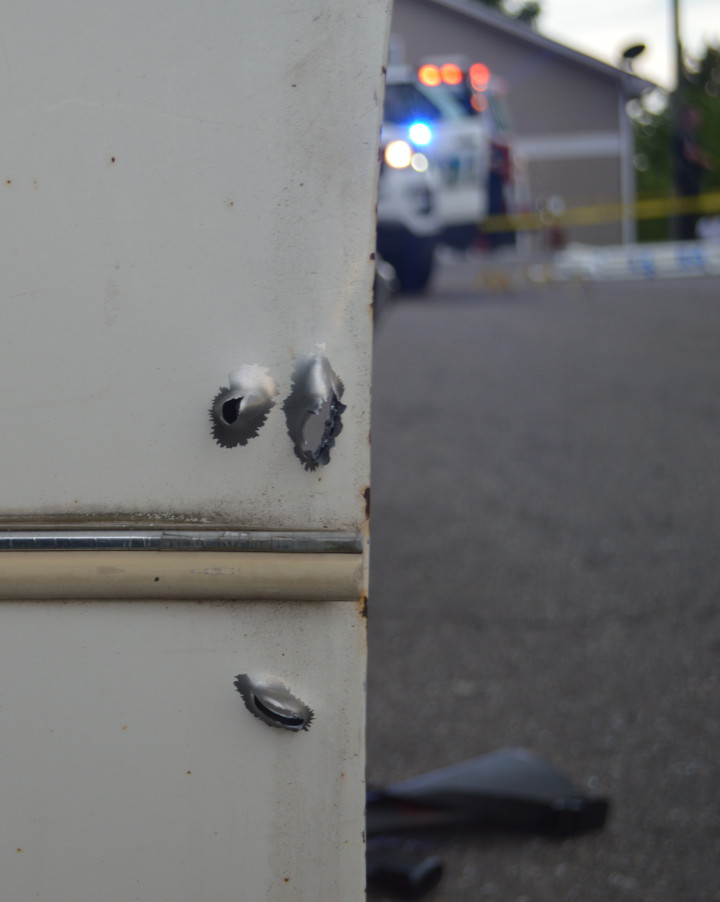 A crime-scene photograph showing bullet holes where several of Sgt. Radfords nine shots hit the open rear door of the white Chevrolet. It also shows the rifle recovered near Williams’ body and Radford’s police vehicle in the background. Photo courtesy of the District Attorney’s office 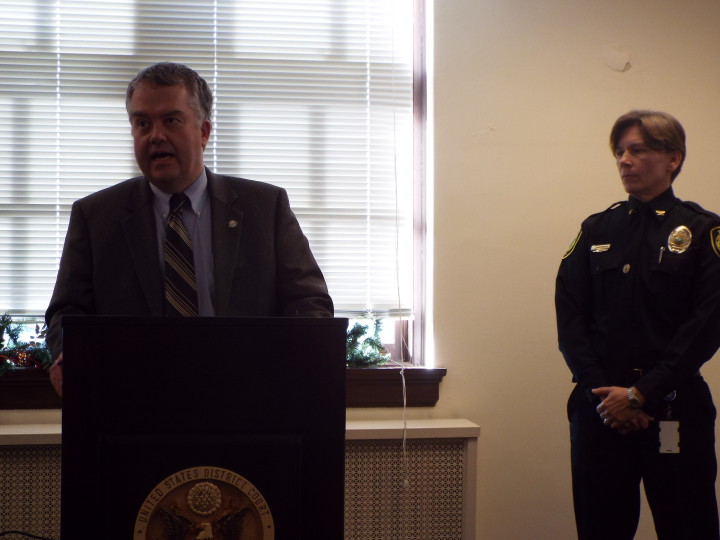 DA Todd Williams and APD Chief Tammy Hooper at the press conference in the Federal Courthouse. Photo by Able Allen

Timeline of radio and telephone traffic related to the incident. Provided by District Attorney’s office

According to Doe 1’s account, after Doe 2 left the car with the young child, Williams also exited the car and opened the driver’s side rear door. His rifle fell out on the ground and he picked it up “like he was going to shoot or something,” Doe 1 said. Radford then shot Williams and Williams fell to the ground. Both Doe 1 and Doe 2 said that they thought Williams was trying to shoot Radford. Doe 2 did not witness the actual shooting.

A third witness, Jane Doe 3, observed the car’s arrival at Deaverview Apartments and the subsequent confrontation with Radford. In an interview conducted two days after the shooting, she said she saw the driver hitting the female passenger (Doe 1) as she screamed for her child. She saw Williams get out of the car, open the rear door and reach through the gap between the door and the vehicle to pull out a gun (which she described as larger than a pistol). At that point, she said, Williams was shot. She also said that Williams looked like he was moving with purpose, as if to hurt someone, and that he ignored Radford’s commands to “Put your hands up!”

DA Williams said that the law which allows Radford’s action in the face of a threat to his own life or that of other bystanders is rooted in the same law that allows any person to kill in self-defense.

Asheville Police Chief Tammy Hooper was on hand at the press conference. She did not discuss specifics of the case while it was under investigation, and she did not make a statement during the press conference. Hooper did add to the question-and-answer session afterwards, saying that in her opinion no form of deescalation tactic would have effectively managed the situation with Jerry Williams poised to fire on Radford. She also said that Radford will remain on leave while the APD’s internal administrative investigation is completed. She expressed hope that the administrative investigation will conclude before the end of the year.