MHO staff, partner organizations, sponsors, local and state government officials were on hand to dedicate the three story, 55-unit apartment building, which is reserved for senior citizens with limited means. “Eligible applicants must be 55 years of age or older and have incomes below 60 percent of the area median income,” explained Lisa Keeter, Resource development manager for Mountain Housing Opportunities. “For a one-person household that is less than $23,520 per year; for a two-person household, $26,880.”

The evening opened up with a tour of the facility, which features a combination of one- and two-bedroom apartments, a recreation room, examination room and computer area for residents to use. Eighteen months in the making, the apartment complex was filled in a matter of weeks, according to Becky Stevens of Partnership Property Management, whose organization works closely with MHO to manage their developments.

Out of 255 applicants, Stevens said that 48 were approved and several more will be in the next two weeks. Mountain Housing and Partnership Property Management gave special attention to veterans dealing with home insecurity and the disabled, Stevens said in an official address prior to the ribbon cutting. “It’s so rewarding to see a 92-year-old woman, who’s lived in housing authority apartments all her life, cry tears of joy in the doorway of her new apartment here,” she noted. “People are proud to call this home.”

Other notable speakers at the event included Scott Dedman, Executive Director of Mountain Housing Opportunities, who opened the evening with a moment of silence in remembrance of Taylor Hunt, son of former vice-mayor Marc Hunt, who passed away earlier this week.

Newly-appointed vice chair of the Buncombe County Board of Commissioners Brownie Newman offered his thoughts on the importance of MHO and similar organizations in the effort to provide affordable housing in the county, saying he was “happy to play my small role in bringing this to fruition.”

Bill Oglesby, who sits on the board of directors of the North Carolina Housing Finance Agency, emphasized the importance of projects like the Villas at Fallen Spruce to the local economy, noting that “These developments bring in jobs and enhance the community.”

Next to the podium was N.C. House Representative Brian Turner, who spoke of his time spent in the area as a child and welcomed everyone in attendance to “my home.” He remarked on the growth of the area since his childhood, making a point to note that “the affordable housing crisis [here] is real.” Turner pointed out that “developments such as this are huge” in providing seniors access to amenities without the necessity of a vehicle. He went on to praise MHO for “making the tangled mess of local, state and federal agencies work together” to accomplish its task.

MHO’s development partner in the Villas project, Drew Schaumber of Schaumber Development, spoke next, reiterating how rewarding it was to be involved in the project. He said that the quickness with which the apartments were leased proved “the need for more affordable housing across this region.”

Dedman also took time to acknowledge the large role that the Asheville Housing Authority played in facilitating the new development ad singled out his own staff for “putting together the various parts [of the project] into working order.”

Cindy Weeks, MHO’s vice president, also thanked her staff for their work and gave a shout out to her mother, who was in attendance for the ceremony.

Stonestreet rattled off an impressive litany of facts about MHO’s accomplishments year to year, including emergency home repairs for approximately 200 families last year, helping homeowners and leasees save hundreds of thousands of dollars in mortgage payments through its self-help programs, creating 500 local jobs a year for contractors and affiliates, providing 60 to 80 affordable homes and apartments a year and bringing over 10 million dollars in investment to Buncombe County.

“As we celebrate tonight, let’s remember to support the amazing work of Mountain Housing Opportunities and its staff,” Stonestreet said.

Following the official ribbon cutting ceremony featuring the project partners, MHO staff and members of the nonprofit’s Board of Trustees, attendees gathered to celebrate, enjoy some food and beverages and pledge support for Mountain Housing’s work through it’s annual housewarming gift registry.

“This event is really two events rolled into one,” said Dedman, who explained that the gift registry highlights a list of materials ranging from smoke detectors to building supplies, with an associated donation cost to illustrate what the funds would go towards providing for future projects.

The house warming party gives our guests a way to participate in a fundraising program at the event,” said Keeter. “The program is unique because we also send out the URL to donate online and a paper copy in our invitations, so people can respond before the event when they send in their RSVPs. We also include a paper copy of the registry in our year end mailing, so people in the community have several chances to participate.”

For those who couldn’t attend the housewarming party but would still like to donate to the Housewarming gift registry, an online donation form and list of materials needed is available at simpleregistry.com/MHO2015.

To learn more about Mountain Housing Opportunity’s work in and around Buncombe County, to help support the organization, or to see some of the other current and future projects MHO is working on, visit mtnhousing.org. 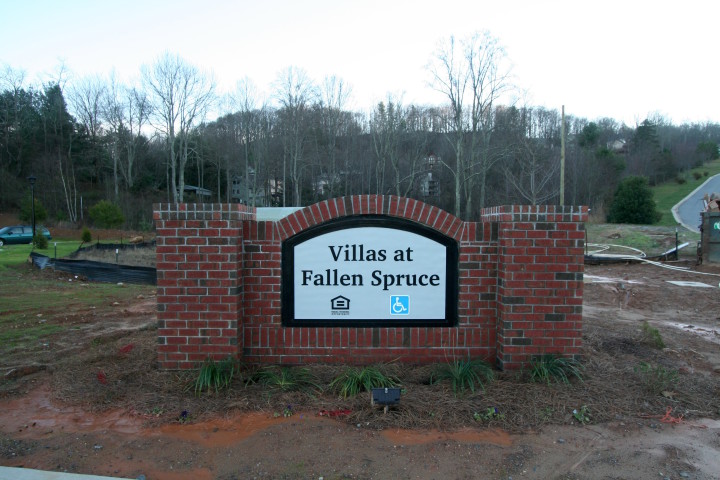 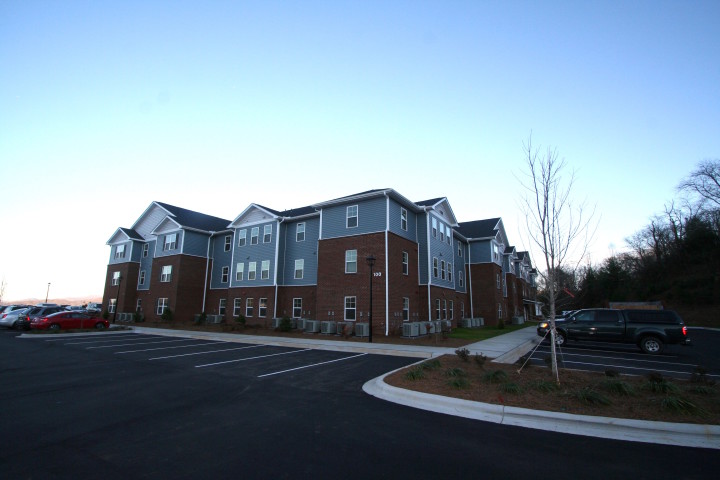 NEW DIGS: The 55-unit Villas complex features three floors, one and two bedroom apartments, a recreation room and other amenities for senior citizens living on a limited budget. Photo by Max Hunt 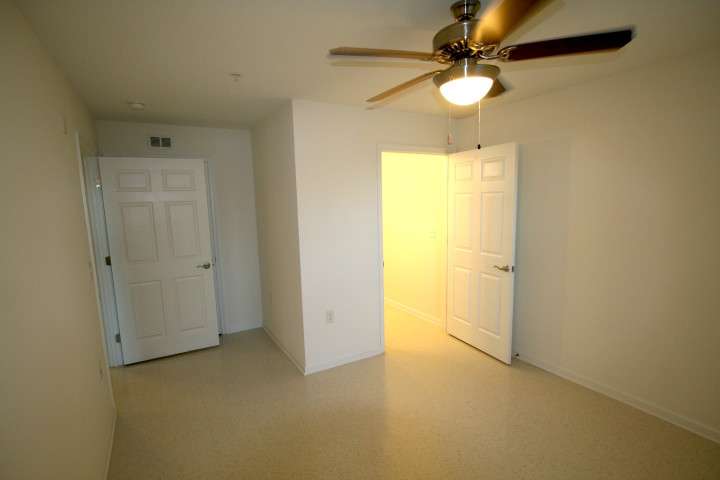 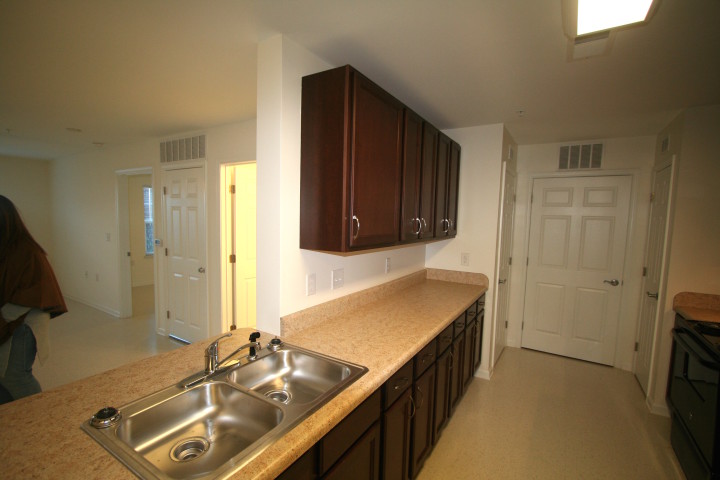 A ROOM OF THEIR OWN: The Villas appartment facility will provide senior citizens living on a limited income with low cost housing and walking access to grocery stores and other amenities. 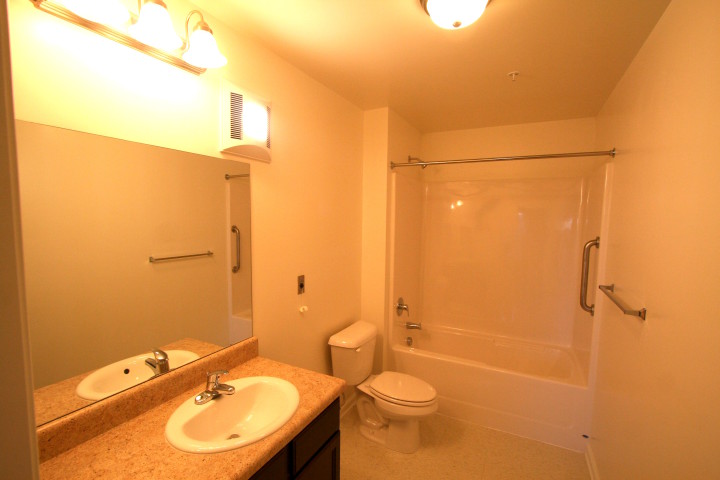 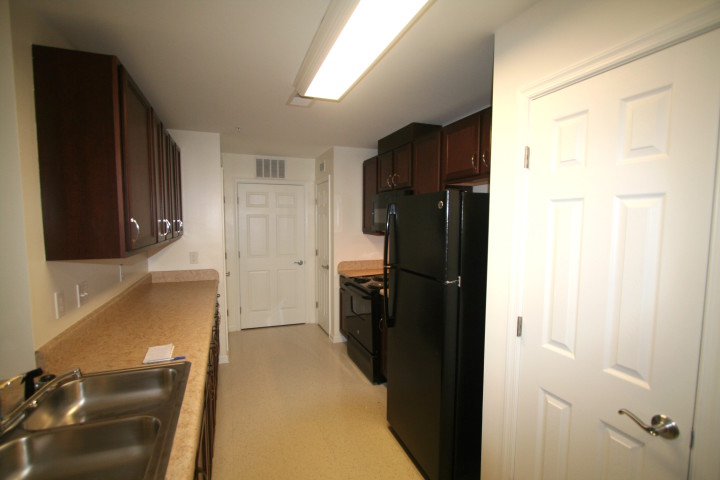 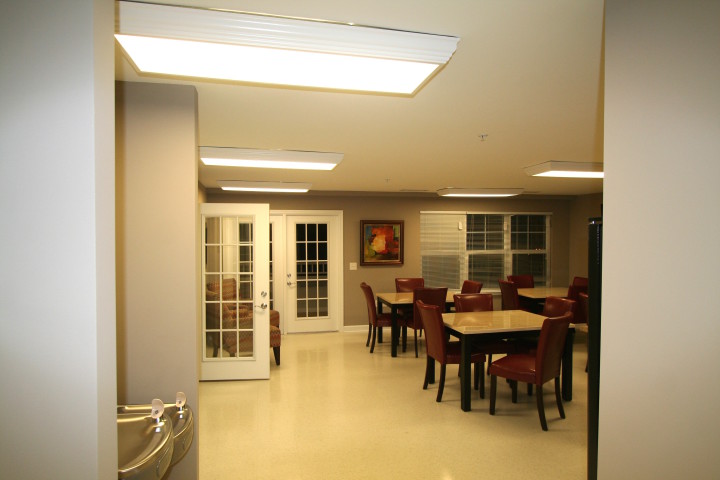 In addition to the apartments, The Villas features a recreation room, computer room, exam room and other common spaces for residents to gather in. 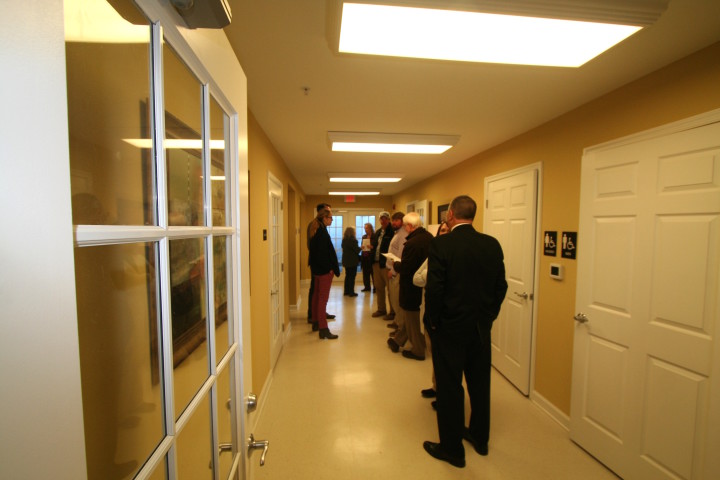 A LOOK INSIDE: Community members and supporters took a tour of The Villas prior to the official ribbon-cutting ceremony. Photo by Max Hunt 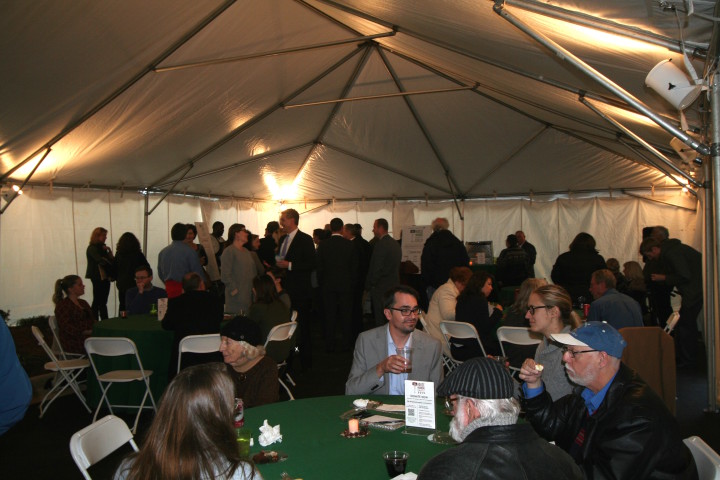 Attendees for the ribbon-cutting ceremony were treated to hors d’oeuvres and beverages throughout the evening. 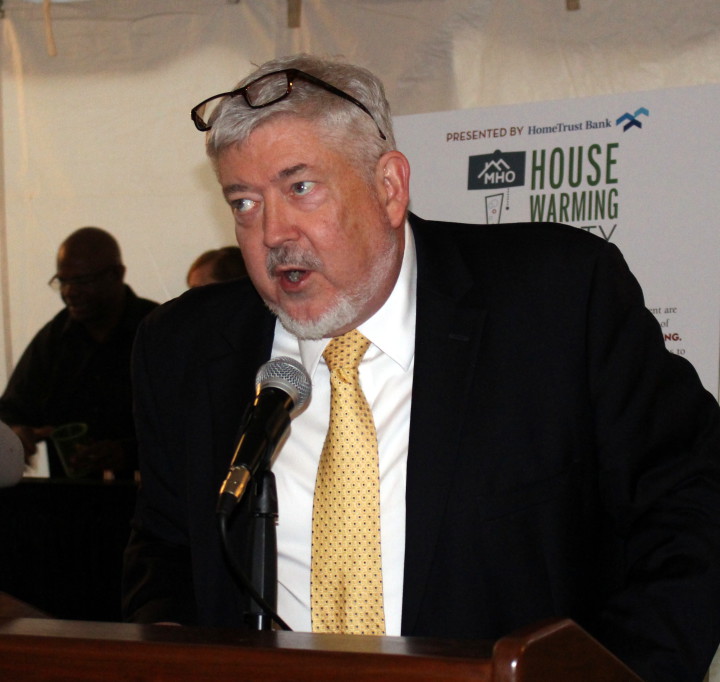 Scott Dedman, Executive Director of MHO, kicked off the evening with thanks to his staff and partner organizations as well as a moment of silence for former councilman Marc Hunt’s recently deceased son. Photo Courtesy of MHO. 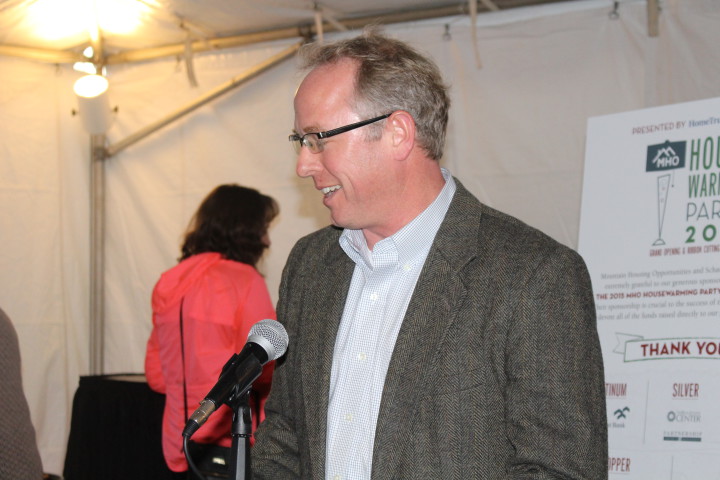 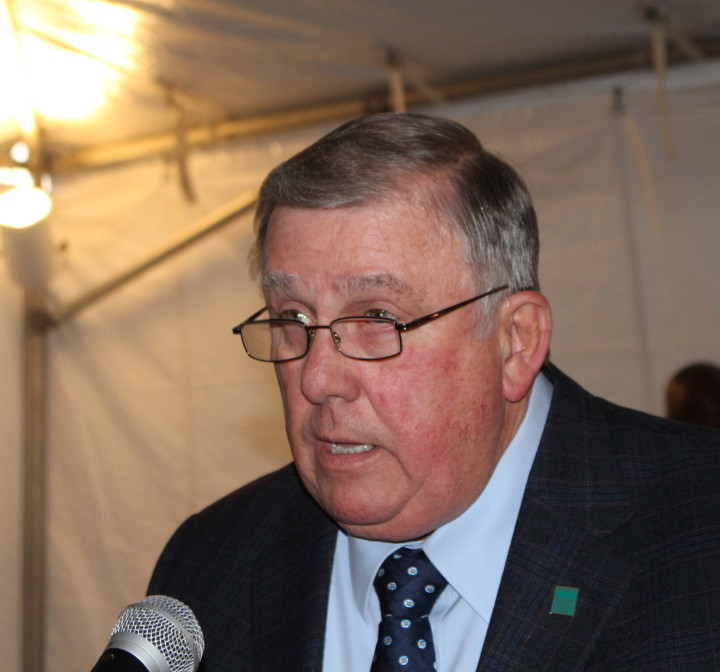 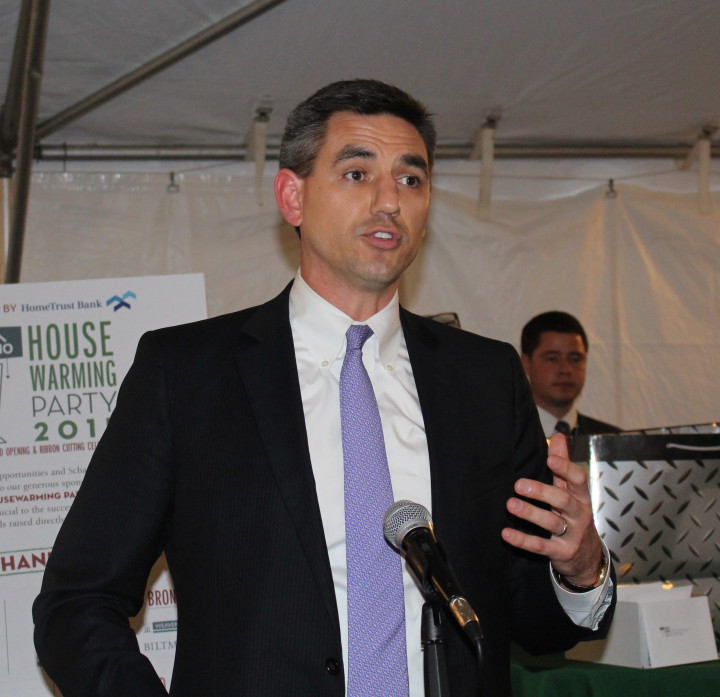 N.C. House Representative Brian Turner was on hand to welcome everyone to his childhood stomping grounds and speak about the importance of providing affordable housing to Buncombe County residents. Photo courtesy of MHO. 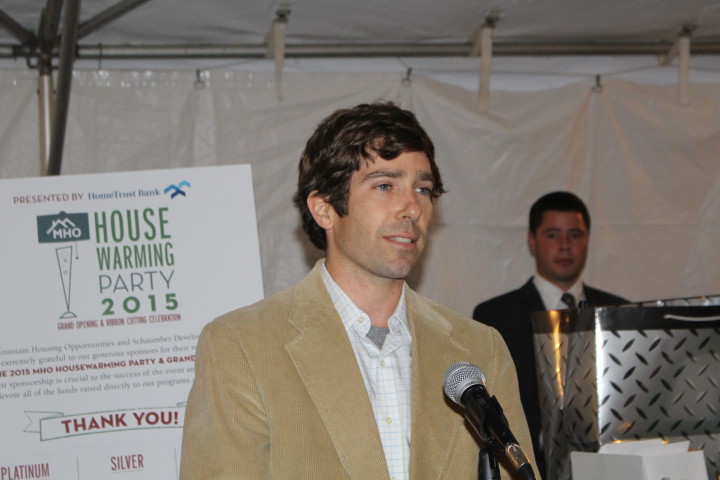 Drew Schaumber of Schaumber Development, MHO’s partner in the Villas project, expressed gratitude for the opportunity to be involved in helping Buncombe seniors find an affordable place to live. Photo courtesy of MHO. 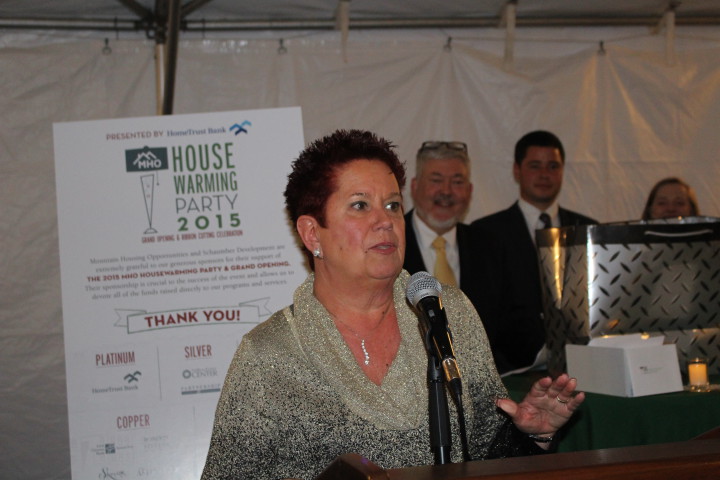 Becky Stevens of Partnership Property Management spoke of the quickness with which applications came in for leasing the Villas Apartments and the personal impact MHO has in improving the living situation of residents in need. Photo courtesy of MHO. 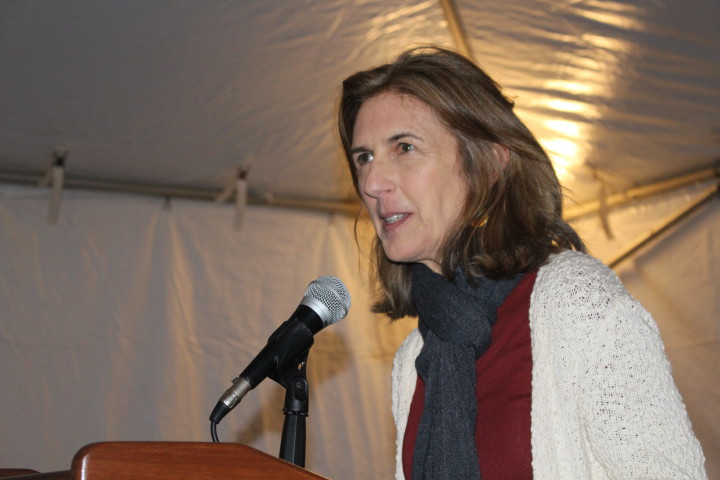 MHO’s Vice President Cindy Weeks introduced her staff members who worked on the Villas project and gave a heartwarming shoutout to her mother, who was in attendance for the ribbon-cutting ceremony. Photo courtesy of MHO. 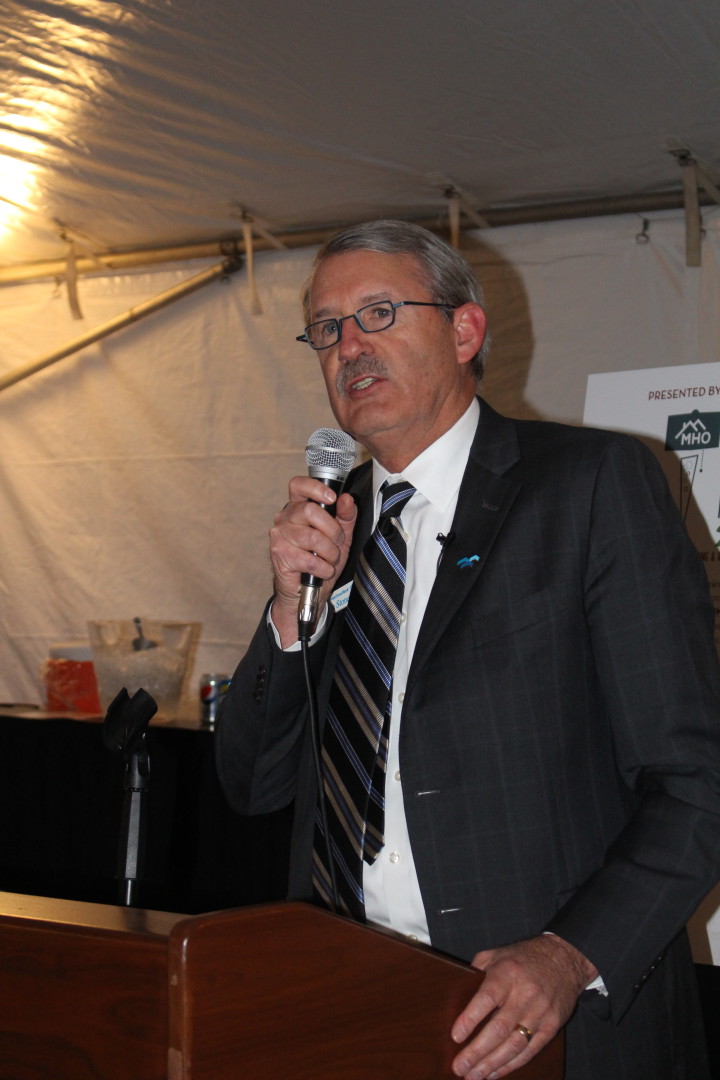 Dana Stonestreet, President/CEO of HomeTrust Bank, recited the valuable services that MHO provides to members of the Buncombe community and expressed his pride in sponsoring MHO’s work. Photo courtesy of MHO 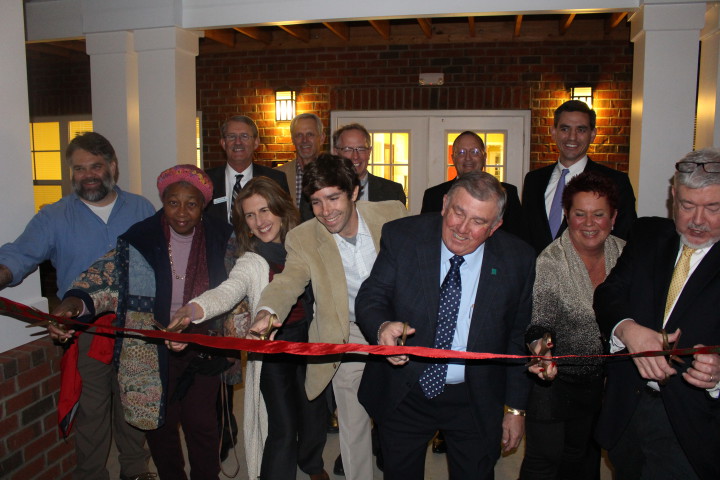