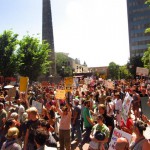 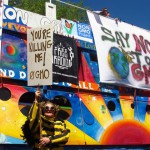 More than 1,000 people gathered at Pack Square in downtown Asheville on May 26 to protest international company Monsanto, a leading producer of genetically engineered seeds. The rally and demonstration were part of "March Against Monsanto," involving 36 countries worldwide.

Guest speakers, food activists, farmers, bee-keepers and chefs stood atop the multicolored "Magic Love Bus," parked near Pack Square, to address a large crowd of protesters. Complete with drums, hula-hops and costumes, the crowd shouted, clapped and cheered throughout the event, which culminated with a march through downtown Asheville.

Here is some of what the scheduled speakers and other attendees had to say. What do you think about the use of GMOs in agriculture and food production? Join the conversation at avl.mx/tv.

From the Love Bus

Birke Baehr, a 14-year-old sustainable-agriculture advocate, best known as one of the youngest people to give a TED Talk, spoke about the importance of knowing where our food comes from. "I think that getting kids, adults — everyone — interested in their food system and knowing exactly where their food comes from and what's in our food, is such an important thing, and that has been lost over the years," he said.

Rebecca Friedman, owner of Farmer's Daughter Catering, encouraged conscious consumer action. "I'm a caterer, and I use only seasonal, organic and locally sourced ingredients, and I use absolutely no GMOs. I buy direct from my farmers, and I will never buy anything from Sysco or U.S. Foods, or any other big-ag food provider. What if, collectively, we vowed to spend our food dollars at stores and restaurants that share our values and provide organic and non-GMO food? Can we do this, Asheville? Are you with me? We have massive economic impact collectively! But, to make it work, we have to be willing to pay the difference for those GMO-free ingredients."

Dayna Reggero, an advocate for the environment and bees, began her address with this: "'Einstein said that, within four years, without important pollinators, that the human race would perish.'" She continued to say, "Right now, 200 million pounds of Roundup [an herbicide] is sprayed on crops around the country and another 100 million pounds is used in our yards, in our schools and in public parks. … Food security does not mean going into a lab and making us food-secure, it means ourselves, putting our hands in the dirt, and making ourselves food-secure. We need these bees, we need these important pollinators."

Word on the street

Nelly Dawson of Sow True Seeds said, "We've been active in the GMO-free arena for a while. We're actually involved in a lawsuit against Monsanto — a class-action lawsuit — with OSGATA [The Organic Seed Growers and Trade Association]. We got a GMO Free WNC petition that we're collecting signatures to declare GMO-free zones here in Western North Carolina. At the core, we believe in true seed, because you can't patent life."

Organic farmer and organic seed grower Peter Waskiewicz said that he came, "Because there are too few people controlling our food supply, and they do not have our best intentions in mind, quite possibly the opposite."

Beth Buzogany said, "It's time to rein in Monsanto's power." Her husband, Buz Buzogany added: "We honestly believe in simple starts, and the simple start is making sure that everything is labeled, so at least you have a choice. We think the seed production shouldn't be controlled by one or two companies in the United States or around the world."

Luke Trotman, a farmer in Asheville, working on a community garden at a recovery house on Grail Street, said, "I'm here to represent the youth farmers, and to have my energy here as a sovereign individual to support freedom from corporations and freedom from this spiritual confusion that we have going on within ourselves. [I am] trying to ford the revolution of people growing their own food, providing their own food, and not going to the supermarket anymore — it's beyond that."

One thought on “Dispatches from the March Against Monsanto”