After years of city planning and public forums, another year of designing, sculpting and painting and a month-and-a-half of installation, Daydreamer, Asheville’s newest piece of public art, is finished. Asheville muralists Alex Irvine and Ian Wilkinson took down their scaffolding on Wednesday, Nov. 5, revealing the first unobstructed view of the new work.

WHAT: Unveiling of Daydreamer mural by Asheville artists Alex Irvine and Ian Wilkinson
WHERE: 51 Biltmore Ave., north side of Aloft Hotel
WHEN: Saturday, Nov. 8, at noon. Free to attend

Daydreamer, formerly known as the 51 Biltmore Public Art Project, is located at the north entrance of the Aloft Hotel parking garage. To celebrate its completion, the City of Asheville and the Public Art and Cultural Commission will host an unveiling ceremony on Saturday, Nov. 8 at noon. An artists reception will follow in the hotel lobby.

The work features a daydreaming woman known as Mary gazing out from an arch-topped windowsill. Stylistically, it combines Asheville’s legacy of Art Deco architecture with modern design and Aloft’s color scheme. “Asheville has a rich terracotta history, and that’s inspiring to me,” Irvine says.

Irvine, a ceramicist, and Wilkinson, a painter, blended design elements they found in facades like Douglas Ellington’s S&W Building and Asheville City Hall. “If you live somewhere and you’re going to make a piece of public art there, you need to look into the local history to make it relate to its surroundings,” said Irvine. 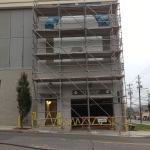 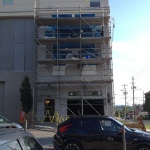 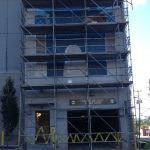 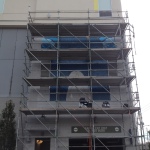 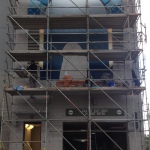 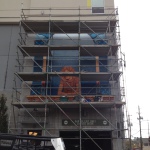 The central figure, for instance, is backdropped by a deco horseshoe pattern in homage to a farrier who once operated on the site. The artists also temporarily included a nod to the Hot Dog King, a fast-food restaurant that was torn down in 2011 to make way for the hotel. That latter inspiration came from a public discussion forum. “Somebody wrote that in — to make the mural a monument to the Hot Dog King,” says Wilkinson. He and Irvine opted for something smaller and made the restaurant’s logo — a hot dog mid-stride, with crown in hand — the keystone at the top of the illustrated archway. The logo has since been covered up by a decorative and more traditional keystone.

The installation process went smoothly for the most part. However, there were a series of unforeseen set-up issues, including the need for pedestrian-friendly scaffolding and structural reinforcement, that set the project nearly $5,000 over its original $25,000 budget. “We had to structurally reinforce the wall,” Wilkinson says. “Anyone taking on this project would have been in the same position.”

Irvine and Wilkinson enlisted Robert Steffen, a professor of engineering at Western Carolina University, to help with reinforcing the walls. The task required threading rebar anchors and stainless steel wiring into the existing wall. This was in addition to an industrial strength epoxy used to adhere the tiles to the wall. The epoxy was strong enough by itself, but the wall required the additional reinforcement for safety compliance.

“Even when we tested the work with no metal fastener at all — just the tile, epoxy and the cinder block — we never found the shear strength,” Wilkinson says. “The cinder block would always break first.” The bond, meanwhile surpassed 7,000 pounds of pressure.

“It’s used on bridges and skyscrapers,” Irvine says. “It’s also incredibly toxic.” And, like household epoxies, it has to be mixed and applied by hand. Irvine and Wilkinson joke that the extra work, though frustrating, ultimately improved the strength and safety of both the artwork and the building.