Asheville isn’t particularly known for its hip-hop scene, but don’t tell that to the legion of music lovers who gathered on Monday night at The Orange Peel to catch alternative hip-hop icon Aesop Rock and his cohort throw down a feverish set of new and older material from his nearly two-decade career.

The show opened on a high note with Queens, N.Y.-based rapper Homeboy Sandman performing several songs to hype up the the crowd. Amid a set design reminiscent of a Brothers Grimm fairy tale (complete with trees and plastic replicas of woodland creatures), Sandman and DJ Zone ran through a staccato-paced opening set that ranged from the political to the ethereal as the MC settled into his flow.

“This is a celebration of life,” said Sandman, who has collaborated with Aesop Rock on the Lice EPs over the past two years. “There’s a whole lot of creatures here tonight.” When not bouncing through songs in frenetic lyrical delivery, Sandman paused to laud Asheville for its friendly residents, riff on indie movies and pump the crowd up.

“My job out here is to get the crowd warmed up,” he said before introducing the headliner, “but y’all already live and rich.”

After a brief interlude, the lights fell as a cryptic backdrop added to the pagan vibe emanating from the stage. As DJ Zone dropped into a floor-shaking bass line, Portland-based Ian Matthias Bavitz, aka Aesop Rock, and longtime collaborator Rob Sonic trotted onstage and launched into some of the former’s newer material from the 2016 album The Impossible Kid.

The iconic wordsmith and rapper, who revealed he’d turned 40 while on tour, was in fine form, laying his trademark lyrical density across a winding beat like a melodic handkerchief string, juxtaposed against Sonic’s rapid-fire, take-no-prisoners accompaniment.

Aesop spent time between songs bantering with Sonic, DJ Zone and the audience, waxing philosophical about the career of the California Raisins, passing apples and oatmeal cookies back and forth with the crowd in the front row, and opening up an impromptu — if short-lived — Q&A session with audience members during breaks.

The edginess and energy was balanced by reflections on sibling relations in “Blood Sandwich” and the psychedelic abstract associations of tunes like Hail Mary Mallon’s “Krill.” Beneath the verbosity and free associations, the message is one of processing the often confusing real-world experiences of a sensitive guy with 40 years experience in a rapidly changing world.

“Fifteen years taking prescriptions/now a shrink like, ‘Ionno, maybe get a kitten.’” Aesop sings on “Kirby,” displaying his ability to combine the darker emotions that bubble up in daily life with the absurd and exploring the complex feelings of anxiety and discomfort that pervade much of modern society, while letting the audience know it’s OK to feel out of place.

“Y’all love each other in this room?” Sonic asked at one point, before leading the crowd in a chant of “Take The Brain Out/Leave the heart in.” Aesop, meanwhile, went so far as to compliment the collective scent of the city — “Asheville, y’all smell great!” — perhaps the first time such flattery has ever been leveled at the Cesspool of Sin — before finishing off the main set with classics like “Nightlight/Daylight” and “Shall Not Pass.”

After a hearty chant for an encore, Aesop took the stage again, this time with Homeboy Sandman, for a rallying cry of a finale, as the two rappers traded off verses on “Zilch” and “Oatmeal Cookies.”

The satisfyingly weird, wry happiness left lingering in the faces of those standing around as the lights went up speak to the power of Aesop Rock’s verses and message: that individual creation stems from, as Aesop and Sonic sing in “Daylight,” wanting to “pick apart the day/ Put the pieces back together my way.” 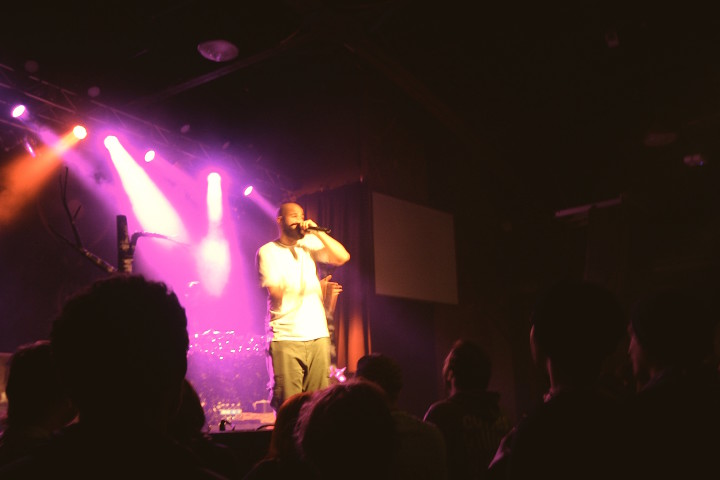 Opener Homeboy Sandman got the crowd riled up before the main event. Photo by Xpress 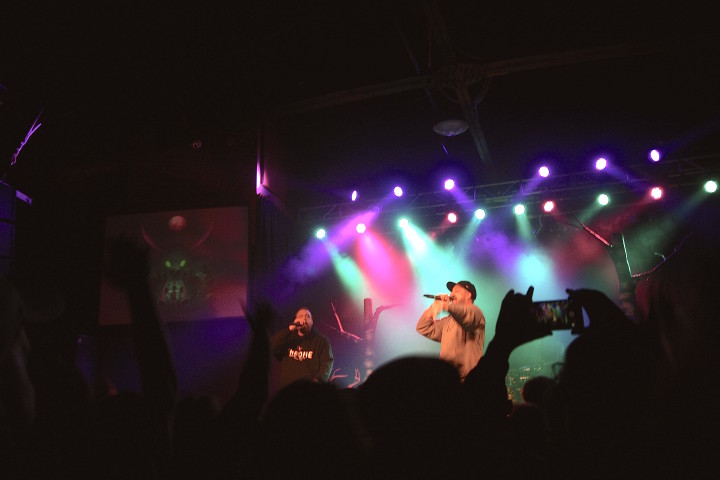 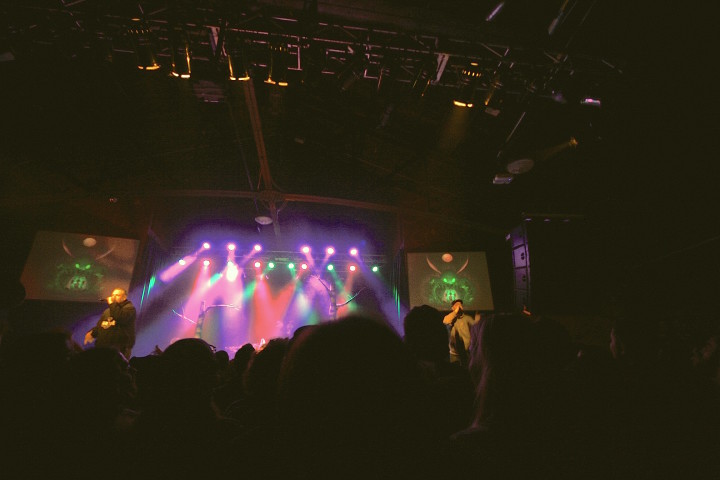 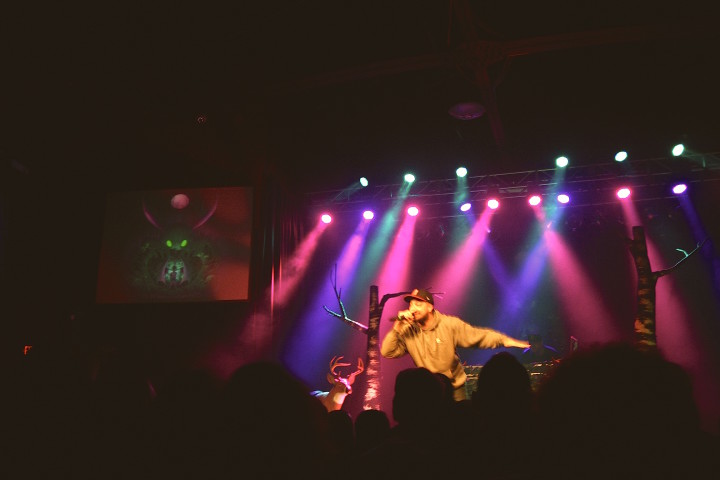 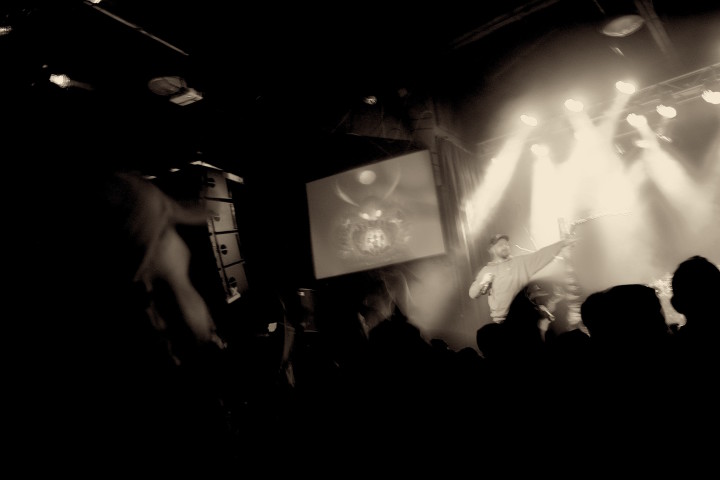 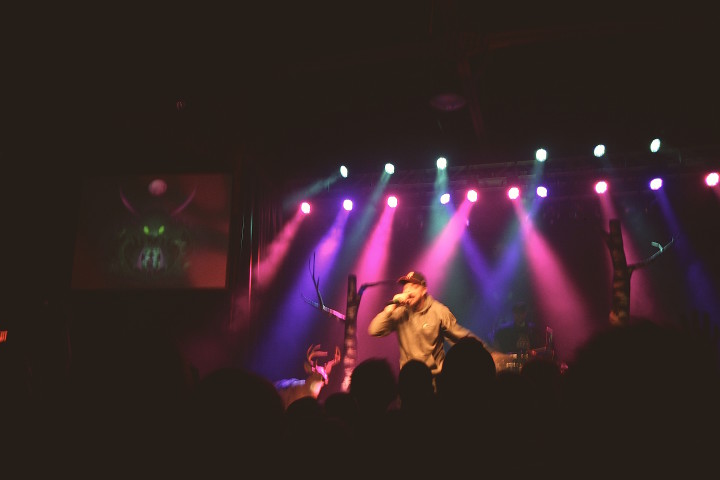 “Asheville, y’all smell great!” — perhaps the first time such flattery has ever been leveled at the Cesspool of Sin. Photo by Xpress 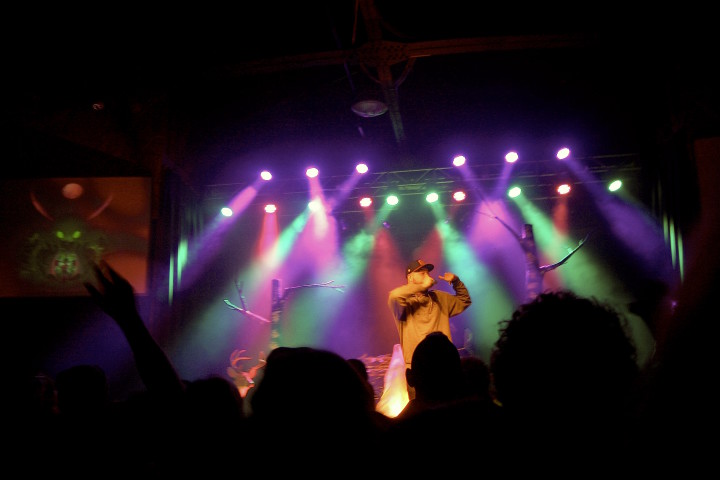