After several months of anticipation, Sovereign Remedies, Asheville’s new farm-to-glass cocktail haven, opened last week. In his typical, community-focused fashion, owner Charlie Hodge first welcomed Asheville bar employees for a Bartenders Brunch on Wednesday, Sept. 3, followed by a family-and-friends event on Friday, Sept. 5, which allowed VIPs and the press to get the first tastes.  The bar finally opened to the public on Saturday, Sept. 6, with the first night in a month of planned soft openings.  At the Bartenders Brunch, guests sipped on milk punches, shots of fernet and an astounding bloody Mary made with fresh heirloom tomatoes and garnished with shrimp and pickled ramps. They were also treated to all kinds of pastries and treats prepared by the bar’s own baker, Leah Peacock.

Although it is already easy on the eyes, the bar itself still has needs a few finishing touches. The zinc bar top has yet to be installed, so Hodge had guests sign the unfinished bar surface so their messages and signatures will be sealed beneath once finished. “The soft opening is about us finishing our decor,” says Hodge. “Iron Maiden [metal art] is coming in and finishing up some metal work. There were things beyond the building codes that we had to put on the sidelines so that we could get legal and open, so now there are all these other details that I’m really excited about that will pull the room together a little bit more.” But the space is already beautiful. Elegant lights glimmer overhead, casting a yellow glow on the original tin ceiling, uncovered during the initial demolition of the room. Soft green and taupe walls accent the repurposed wood shelving and vintage cabinets that reach for the high ceilings where long, ornate and angled mirrors hang.At the soft opening, servers handed out tantalizing hors d’oeuvres of fresh, lightly pickled herring and mustard greens wrapped in thinly sliced seared and chilled steak. It was simple, spicy, elegant and complexly flavorful, just like the venue itself. The menu offered decidedly Scandinavian fare, something that Hodge says may well continue as James Albee settles into the kitchen, which still smells more like fresh drywall than the home base for the seasoned chef.

“Being the owner of a restaurant and bar, it’s funny, but I’m not really sure what the menu is going to be. But I’m sure it is going to be exceptional,” says Hodge. “That’s sort of the luxury of having a dear friend whom you’ve worked with on and off for almost two decades as your chef. I don’t even have to worry about that. I let him tell me what he’s doing. No chef or artist wants to pigeon hole themselves, but to describe the food, he is allowing me to say that it is blue-collar European food.”Hodge met Albee at Burning Man and was later  hired by him. The two helped to open Holocene in Portland, Ore,, a bar that preceded the now famous Clyde Common, which the two also worked to open.

Hodge’s partner, Sunil Patel, runs Urban Patchwork Farms, a progressive urban farm that seeks to utilize unused spaces and properties within the city limits to provide fresh food for Sovereign Remedies and fresh produce to food deserts throughout Asheville. “It’s really nice to have this integrity with Sunil on one side with the farm and how we’re sourcing things, and then Jimmy’s integrity on the other side,” explains Hodge. “Jimmy would rather have no protein in the house, than compromise for one second on what we serve. So there’s no running to Ingles if something runs out, there’s no fixing a situation. If we don’t have something, we have to wait until we get a source that has the integrity and quality that we want. So it’s really nice to be in the place where you can make that call and know that it’s OK to spend a little more money there. I’m not trying to feed all of Asheville here, I’ve got 30 seats. This is a place for people who want to eat and drink like I do and have a consciousness about how animals are raised and slaughtered and where their food comes from.”Hodge also plans to work with the bar’s neighbor, the Herbiary, and herb and herbal products shop.  “I really want to explore that green spirit, not just for the food, but for the drinks as well,” he says. “How do you put better, more nourishing things in them? And to have someone like them next door, with such an amazing amount of knowledge, fulfills that intention of putting the plant back into the beverage. We couldn’t have a better neighbor, and I think that Sovereign Remedies is going to be all the better because of that.”Sovereign Remedies is on the corner of Market and Walnut streets. For the month of September, the bar will be open Thursday through Monday 5 p.m.-2 a.m. Following the official grand opening on Oct. 3, they will be serving their tipples seven days a week. 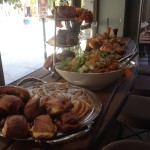 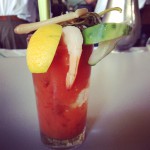 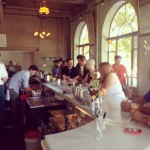