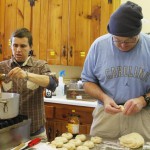 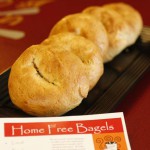 Chris Sullivan knows that Asheville suffers from a lack of locally made bagels. A volunteer with the Asheville Homeless Network, Sullivan also knows there's a significant population of individuals that find it hard to find shelter, let alone gainful employment. Combining two area needs — one decidedly more urgent than the other — Sullivan started Home Free Bagels. The business, still in its infancy, exists to provide more than just good bagels. It also hopes to cook up employment opportunities for the homeless.

Sullivan solidified her business plan in early December, detailing everything in her journal. Not two weeks after Sullivan's private journal entry, Xpress published an article highlighting Asheville's lack of toothsome, honest-to-goodness New York-style bagels. In such a locally focused town, especially when it comes to food, the article queried, isn't it funny that most mom-and-pop shops are now buying their baked goods from a larger corporate entity?

After reading the piece, Sullivan shot Xpress an e-mail. “It's funny that you just ran an article on the lack of bagels in this town,” she wrote. “For the past month, I, with the Asheville Homeless Network, have been working on producing and selling fantastic bagels for a great cause. Home Free Bagels is about empowering the homeless through social enterprise.” In other words, the business aims to teach a man to fish instead of just giving him one, as the old adage goes.

Sullivan speaks concisely and in a very linear, organized fashion. With her slight frame clad in casual business attire, her hair cropped short and a binder filled with mission statements and promotional materials, Sullivan is a picture of professionalism. Still, she has a lighter side: “The universe is lining up” for her business plan, she feels.

She points to the pastry case at the café where we are having coffee. Those bland Sysco bagels, she says, were a catalyst for the creation of Home Free Bagels. She added that she hatched part of her business plan right where we're sitting.

“A lot of people read that article about the lack of local bagels.” And many agree, she said, that a lot of coffee shops and restaurants in Asheville sell sub-par bagels — and begrudgingly, at that.

“When I was doing market research, asking people where they got their bagels, almost always there was this grimace right before they told me,” says Sullivan. “The time is right and the market is prime. It's a no-brainer.”

And how do Home Free Bagels taste? “They're really good. We brought samples all over town, and people said that they're better than Bruegger's,” Sullivan says. “They're definitely better than Sysco,” she says with a laugh. “I've become a bagel expert.”

Sullivan says that she uses a classic New York bagel recipe in plain and “everything” varieties. “It's very simple, as simple as we can get it, and that's awesome,” she says.

Why? “Because we're not just selling bagels, we're selling an idea. We're selling empowerment and we're selling something that means something. The product itself has to be kept simple from a business standpoint,” she says.

Sullivan details the process, and it sounds anything but simple. The dough has to be kneaded and allowed to rise properly. “Everyone knows how to do that,” she says. “But the trick is that you have to use malt syrup. Not sugar, not agave, but malt syrup. You use that in the mix and then you use it in the water that you boil the bagels in.” The end result sounds amazing: “When you bake them, the outside gets crispy and hard, and then the inside is still doughy. That's the key. A hard, bubbly outside with crunch with an inside that's doughy with a satisfying texture.”

It seems like a lot of work, especially when you consider that no one is getting paid — yet. Members of the homeless community are currently volunteering to make the bagels, says Sullivan. “And they understand that. They also get the first shot at a paid position once we go into full-scale production,” says Sullivan. “My vision is a living wage, but right now the goal is competitive pricing. The most important aspect of this project is to get people that otherwise have almost no shot at getting a good job — especially one that's satisfying — to get them employed.”

So far, Sullivan has been using donated space to make the bagels, usually a church kitchen. The Home Free Bagel team, a small group of two to three volunteers per session, is honing its skills before moving into a professional food production environment, like Blue Ridge Food Ventures. Formal production, depending on funding, begins in February, and until that happens, the bagel bakers are strictly focused on building the perfect bagel.

“We're in bagel practice,” she says, laughing. “The point of bagel practice is this: Before we go that large scale and start paying to use those facilities, we want to make sure that everyone is on the same page. We all need to know what we're doing so that we're not spending time learning and teaching in the rental kitchen.”

Once practice is over and Home Free moves into the full swing of things, leftover profits will go to the Asheville Homeless Network, Sullivan says. “The AHN is who is doing the work on a larger scale in Asheville as far as alleviating poverty and homelessness,” says Sullivan.

In addition to her work with the AHN, Sullivan's put together a cold-weather gear drive for the homeless and helped build shelters with Habitat for Humanity. Her preferred work with the under-served involves empowerment, not handouts, she says. “The more handouts you receive, the harder it is to get the initiative to go get a job,” she says. “There is a good majority of people that want to work, that want to get back in affordable housing, back in mainstream society. And they're just down on their luck, like anybody could be. Circumstances of life are brutal sometimes.” Sullivan lost her job last year, a result of the recession, she says.

Though the group still needs some startup funds and a van, says Sullivan, she's confident that everything will fall into place. “The vision is big, but it's totally doable,” she says. “Why would downtown businesses not buy these bagels? They're already invested in alleviating homelessness anyway,” she says. “There are just so many selling points.” Currently, she says, Firestorm Café is the most faithfully devoted to the project, while six other downtown coffee shops are lined up and willing, “as long as the price is competitive — which it is.” Sullivan declined to name those businesses out of concern for their privacy.

Sullivan says that she hopes to see Home Free Bagels in grocery stores in the future. “I would love to have plenty of full-time employees that have health insurance and a home, to be a beacon of hope, to be a little dramatic about it. But that's where I see this going. The potential's huge.”